Clover Imaging Group would like to highlight one important fact from the December 11, 2019 press release from 4L Holdings, which operates as Clover Technologies Group, that announced 4L’s entry into a restructuring support agreement with the majority of its equity holders and a group of its lenders representing over 67% of its outstanding long-term debt. As stated in the press release, “Clover Imaging will not be part of the financial restructuring process, including any Chapter 11 filing.” 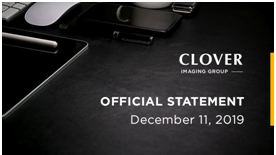 “We are confident that the acquisition will close in the very near future. As we communicated in November when we announced the agreement with Norwest Equity Partners, following the close of the transaction, Clover Imaging Group will have a conservative capital structure and greatly enhanced financial flexibility. We are committed to our go-to-market strategy and excited for the opportunities in front of us,” said Jim Cerkleski, Chairman, Clover Imaging Group.

The company will provide further updates when the acquisition closes.

Please reach out to myself or Eric Martin if you have any questions.