Where are you coming from this early? “Prison!”

Get Marilyn on a bike wearing Berg’s cut.

By JB Brostrom – Saturday begins leisurely. 8:30 wheels rolling and the Pack was ready early. A bit of trepidation as we know Paul’s family visit will be emotional. We make a decision to depart immediately so we can actually have a sit down breakfast when we fuel later in the morning. Gary Rigelsky has been found in another hotel nearby. His penance for being MIA is to buy breakfast. All agree and we’re off…. well not so fast.

We’re futsing with the bikes just before saddle up and a smallish white SUV rolls under the hotel overhang and out pops this Ludicrous looking mother-#$@#$%.(.. it is a movie reverence not a value judgement…. Bad Boys II). This smiling and jovial gentleman with amazing neck and forearm tattoos coupled with his tight braids was very interested in this leathered up group of RUBs. The following are his quotes just as he exited his vehicle.

“I love bikers!” “We were driving by and just had to stop!”

Oh cool.. from where are you coming?

“Prison but we’re heading back to Indiana to get my bike… love to ride. I am a one percent-er… (not a Trump vs Biden reference). I am a Master Sargent.” “I love to ride”.

How long wee you in?

Later we explained to some that Master Sargent has nothing to do with the US Military. This dude is not a RUB. He is an officer in a real biker gang. The think is he was so sweet and introduced us to his lady and we had a wonderful exchange and photo op.

Usually this blog writes itself.. no need to create or embellish.

The pack fires up and off we rude toward I71 north to Cleveland. Papa followed by Cal, GQ, Lone Star, Mikey’s Dad, and Paco. 4 more in the RV as Gary Rigelsky has been found and… he is paying for breakfast.

At the light before the entrance ramp, Papa looks behind to find all in the proper lineup. Then to his right to find Cal with no eye protection. Hey Cal, do you need your glasses? “Oh shit!!!” Cal immediately pulls over to don proper eyewear and Papa makes the decision to wait another rotation of the traffic light. Soon the green appears and the first few Pack members approach the highway but the rest are lagging. Presumably waiting for the Mars’ Rover Rover… it was into Columbus and out the north side before the Pack finds its rhythm. At the fuel and breakfast stop we use revisit the road protocol.

90 minutes ahead Papa spots a fuel stop with an Amish/Dutch restaurant that looked charming. Without incident we fueled and made our way to the chosen restaurant. Papa walks in and approaches the hostess. table for 10 please? “Right…. really, how many?”

It is 10, I swear. “Oh, it is not a joke! Sorry, give me a minute to set up tables… actually 3 minutes.” Soon the restaurant and bakery (omg the donuts) had seating for 10 and all was good. Rookies, Crash and the oft missing Gary Rigelsky opted for the buffet. Never never never never when on a motorcycle tour do you choose the buffet! Good luck to the Rovettes.

The rest of the group ordered their chosen menu items and we finished breakfast without incident. As the Pack began to mount up it was decided that the Mars’ Rover Rover would depart ASAP and get up to highway speed. The rest of the Pack would proceed in formation and catch up before falling in just ahead of the Mars’ Rover Rover. Apparently not every one knew this plan but in Pack fashion all you need to do is keep your front partner’s rear end in your stager, while trusting the ride captain. Not unlike an Air Force or Navy precision flying team. Trust.

Papa set a speed a bit quicker than earlier in the morning. Still near the speed limit but we in in catch up mode. We have about 80 minutes of travel and by the 35 minutes mark the Mars’ Rover Rover was in our sights. We come up on our support vehicle and fall into formation, slow a few mph and settle in for the final 45 minutes to our hotel.

After a few miles of getting in to rhythm, Papa concentrated on the road ahead and was anticipating lane changes well in advance so we never have a need to force our way in to exits and ramps. Papa checked his rear view and noticed Cal and… no one else… literally a few unknown cars and 18 wheelers but no other Pack members. What?!?! Cal give the universal sign for “I dunno?!” At the first appropriate place Papa slowed way down and eventually got on the shoulder with hazard lights flashing. Waiting and waiting and waiting… try not to think about what was running through Papa’s mind at this juncture.

How to tell Mrs. Paco…. How to tell Donna…. How to Tell Mrs. Judge… (well this may thank us). Soon the familiar lights of Lone Star’s harley and the others including the Mars’ Rover Rover come up. Some observant civilians noticed and gave way so Papa and Cal could get up to speed and the Pack fell back into line. The explanation would have to wait until the hotel parking lot.

The Pack cruised the balance of the morning into Cleveland without drama or incident. As the Pack pulled into the Hotel they noticed KFly and Slaw waiting impatiently at full video and camera readiness. How cool is this. We will be at 8 bikes and 4 in the Mars’ Rover Rover. The Pack parked and hugged their missed brethren.

Papa queried GQ about the incident on the roadway. Seems while traveling at highway speed, Paco noticed that GQ’s spare helmet was loose. He bungees his unused helmet to a luggage rack and the bungee had let loose and was about to drop his helmet off the bike. Bad for the. helmet and the bikes behind. The team from GQ and back and pulled over with the Mars’ Rover Rover as cover to secure the helmet. That was not even close to the scenario wheel that happened in Papa’s head. All good!! All safe. 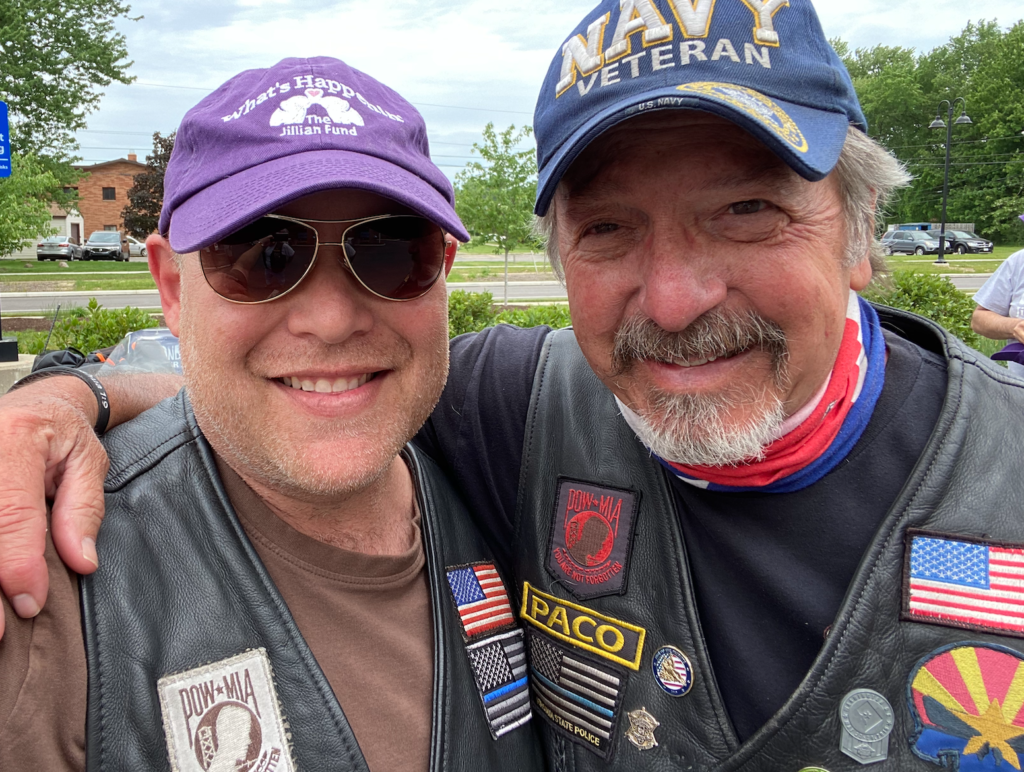 We have 40 minutes to check in and return to the bikes for the short ride over to Paul (Berg) Youngberg’s home for our gathering. As we wound through these quaint and stereotypical mid-western neighborhoods the local kids were fascinated by this slow moving parade of bikes and an sponsorship adorned RV. As we pulled onto Berg’s actual street Papa is searching for signs of the actual home as house numbers while on a bike are almost useless. Then up ahead was a throng of people. Ladies in bright dresses, millennials chatting and upon hearing our engines this group of 30ish people began to cheer and clap and welcome us with gusto… just like their husband, father grandfather would have wanted.

Oh god… the emotions are beginning already. It was demanded of the Pack that we park the bikes up on the driveway in formation. The Mars’ Rover Rover (Berg’s brainchild) would then be nose up the driveway as well. Once off the bikes were were rushed by Paul Berg Youngberg’s legacy. Wife, daughters, grandchildren and their significant others. What a heartwarming reception.

We were taken around back to tents and… god bless the Midwest… a selection of water, beer and pop!!! No soda at this joint… we had pop!

What great stories we shared. It was very obvious that many of Berg’s lineage were blessed with his traits. There were some who were appropriately emotional while other laughed. What a great tribute to Berg. Soon food was served and the Pack enjoyed the sandwiches, salad, cookies. Paco enjoyed the bacon. At least those have calories. Mrs Paco we’re trying!!! 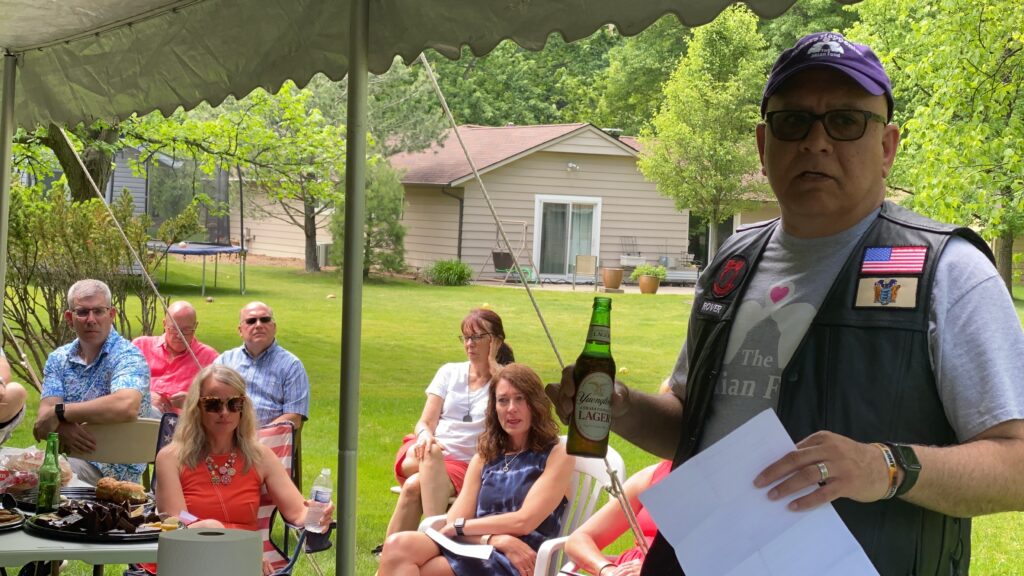 After some time Berg’s daughters gathered with some heartfelt words to express. Before this the Pack would have somethings to present. First his colleague and friend, Rover, read from his heart and some prepared statements. We had previously counseled Rover not to fight the emotions and we would be patient with him. What a wonderful tribute.

This was followed by Paco saying a few words to the family about his experiences with the tenacious Berg. Paco then presented Mrs Berg (Marylin) with a properly encased 13 fold US flag. Papa then presented Mrs Berg with a plaque adorned with our favorite photo of Bert. This was tasered into metal along with a couple of Berg-isms.

It was time for Marylin to say a few words. Due to timing and COVID this was the fist real memorial for their husband, father, grandfather, friend. Marylin told us how healing it was for the Pack to make their way to the shores of Lake Erie in honor of Berg. Next the daughters each paid wonderful tribute to their father. Berg probably stopped his round at heaven’s Amen corner just to watch this and had to be extremely proud of his family and legacy. 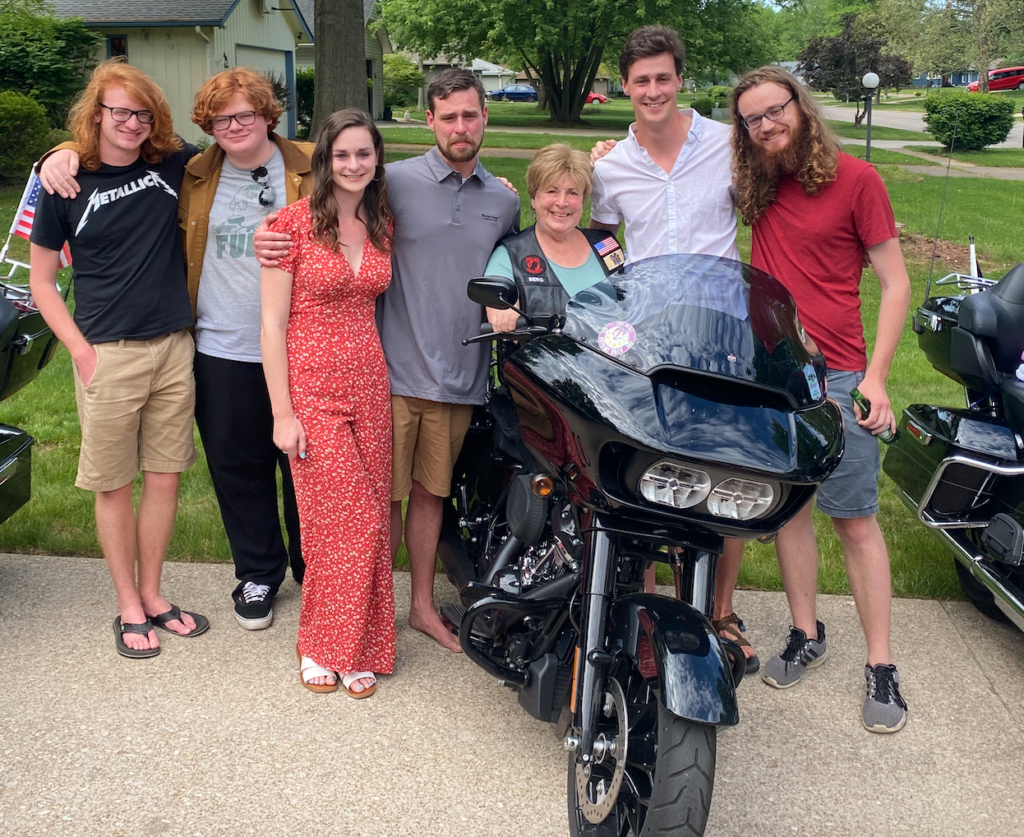 When the girls finished Papa, taking a cue from Marylin’s “healing” comments ended the memorial with a few verses of There Is A Balm In Gilead. “If you cannot preach like Paul…” and lord that man could preach!! Rover then presented Marylin with Bert’s cut as a finishing touch. Marylin perhaps looks better in this that Berg ever did…. shhhhh

All in all it was the trip’s highlight in a trip thus overflowing of highlights.

The Pack mounted up but not before photo ops with Marylin on one of the bikes… then the family got in and we ended up with the greatest of photo shoots!!!

Off we roar to a departure scene much like our entrance. Stunned neighbors and the Berg progeny waving and cheering us off.

Rock n Roll City Harley is next. Cup holders are way too expensive. Electric motorcycles are not yet in our wheelhouse. Slaw, what the hell kind of riding footwear is that?!?!?!?! 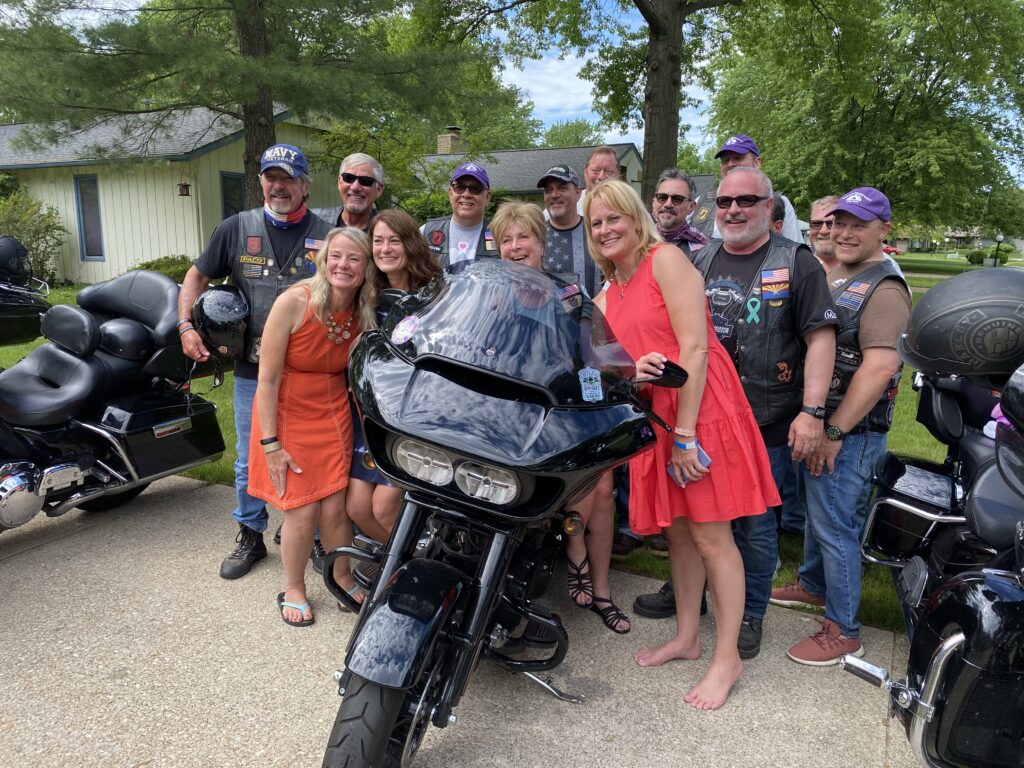 Cool t-shirts but Cal…. the advices is guess a size too small not a size too big or you will be sleeping in Paco’s office. We mount up to find Kory missing… where is Mikey’s dad?!?! “What?!?! Getting his bike washed?!?!” Why not?

The Pack falls into formation and rolls the 10 minutes back to the hotel. Showers, emails, naps, and then campfire later. The pack re-gathers about 8:00 and relaxes with beverages and cigars and cigar adjacent options. Paco demands pizza. No kidding… if you eat during the day you wouldn’t crave pizza at 8:30 in the evening. It’s was decided SHARP would pay for our pizza and delivery. Three large pies were ordered. Cheese only for one. Pepperoni for one. Sausage, mushrooms and green olives for one. 45 minutes later the pizza arrives via the Audi deliver vehicle… perhaps it is mom or dad’s because junior cannot afford this whip on pizza delivery tips.

The pies were uncovered to the dismay of the throng. Apparently large in Cleveland is small in Scottsdale. No wonder Maureen can’t measure.

Turns out size does matter.. and the amount of pizza delivered was exactly the amount the Pack needed! The real Pizzagate has been debunked.

Departure at 6:30 Sunday morning. The Pack has a special mission on Sunday. We have been waiting over two years to bring this day together and it will be epic!