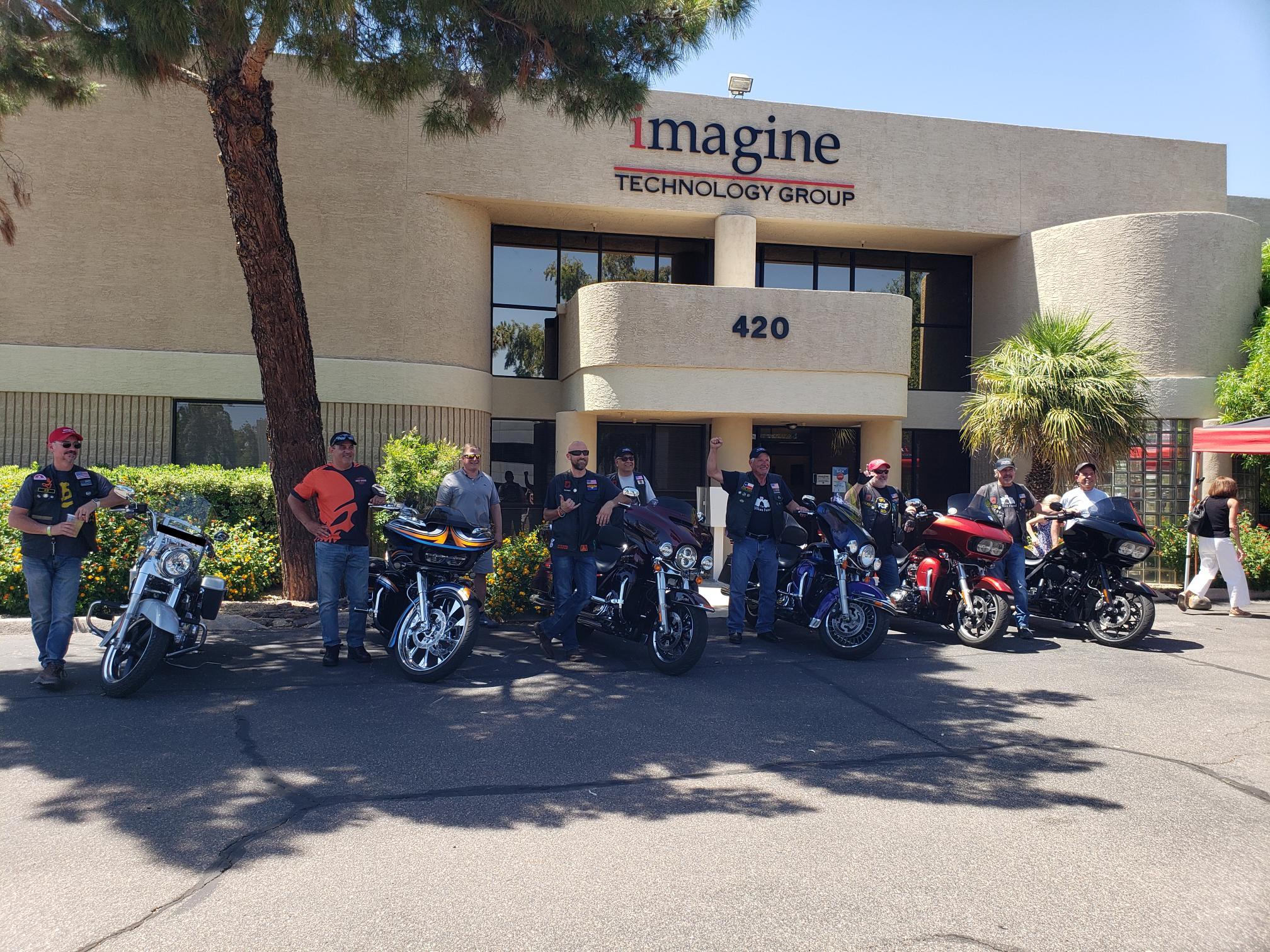 Kick Off (there is no kicking in FCF)

By JB Brostrom – Papa arrived at the casa where Maureen allows Paco to have his garage office. Seems the group, during the prior evening, had too little steak and too much liquid fire. “Moving slowly” would be a good term. Even Boner , who won’t make this year’s ride, rose to the occasion and showed up to join us at our mid-afternoon kick off. Also on the guest List was GQ who officially will not join the group until Nashville. Ostensibly he arrived to make sure the Mars’ Rover Rover is properly adorned with the logos of our gracious sponsors, of which there are more than 20!!! Thank you sponsors. The Pack had a welcomed yet unexpected appearance by Big Red himself, Maureen’s other man, John Kuchta. Big Red is always a good time.

Soon we mounted up and traveled the 35 minutes south to our kick off celebration. The Patriots Pack was welcomed warmly by the folks at ITG (Imagine Technology Group) in Chandler AZ. We we rolled in the ITG family was prepared by shooting video and photographs of our arrival as well as a wonderful food spread. The lemonade (of various and sundry flavors) was spectacular. The Gals from Clover Imaging were present as well. Cool hats from ITG and Clover hoodies caused the Pack to be styling… Also present we’re friends and family of the riders. All guests were welcomed and treated with style by the ITG family.

We waited impatiently for the arrival of the Mars’ Rover Rover. During our wait a taxi arrived and with a Beatles’ type reception, out popped Judge and Rover himself. The Judge even had gifts for the group, some were even legal. Rover showed up without his daughter and ready to eat. About the time we readied for photos. The Mars’ Rover Rover rolled in. I must say it is an upgrade to the 2019 version. We continued with our photos and began to ready ourselves for the return to North Scottsdale. We have a bit of work to do to prepare the bikes, minds, bodies and… the Mars’ Rover Rover.

Before we mounted, Paco presented to the group with a very useful gift card from Sharp. Thank you. Mount up! North we rode. Back to Maureen’s casa where the Pack will regroup and prepare for Day 1.. the longest day!

Also on the agenda is the adorning of the Mars’ Rover Rover with the logos of our sponsors. Our support vehicle will look like a PGA/NASCAR rolling down the rode!! Boner and Papa left casa Maureen during a break in decal adorning. Alarms before 6:00am Sunday so that the Pack will be wheels rolling just as soon as the 7:30am prayer closes.

Is Konica Minolta Ending their Branch Program? A Chat with COO Sam Errigo

Software for your service department. Can you live without this?