By JB Brostrom – If you go through Pie Town New Mexico and stop at Pie Town Pies to eat and order a hot dog… shitty things are bound to happen! Order the Pie people… order the pie!

Shortly after 6:00am Scottsdale time: The day began with trepidation as the weather was perfect but Mrs Paco was out of bacon. “Would you please make another pot of coffee?” Wow, that was polite?!?! “I heard that… It’s early!” Now the world is right. The riders were fussing with their rides awaiting the arrival of the Mars’ Rover Rover. On time she arrived adorned with the logos (logi?) of our generous sponsors… more than 20 of them. When Rookie 1, Cal arrived he was accompanied by Mrs Cal, the ultra young (for Cal) beautiful Minnesotan… a non-redneck from Elk River (may be an oxymoron). Mrs Cal was in her slingshot and intended to ride with us for at least 4 miles. 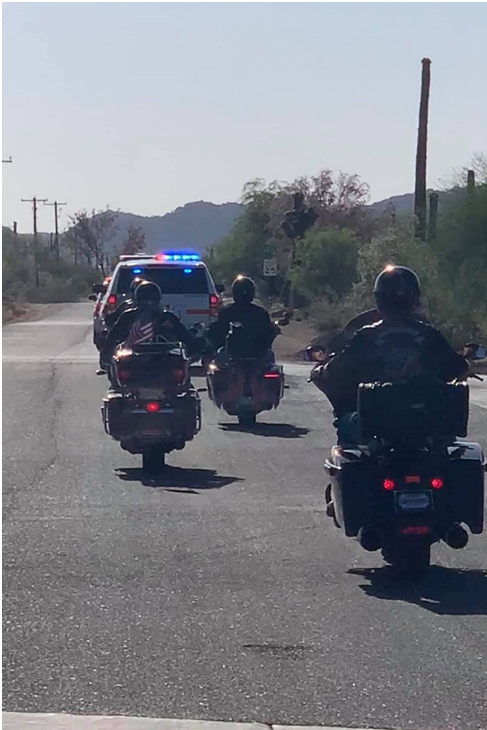 Soon Scottsdale’s finest, Sergeant Stumpf and his partner. We are expecting a police escort from Maureen’s desert oasis, out to Scottsdale Road all the way to the 101 east. Last item on our agenda will be Bishop Staker offering a prayer over the Pack and our families before we depart.

Photos were taken before their prayer as the Pack needs to get moving. 540 miles across AZ and NM primarily on US Hwy 60. It will be a long yet scenic day.

Mount up!!! Sargent Stumpf led us out. Followed by his partner, then in specific order, Papa, Cal, Lone Star, Paco, The beautiful and too young for Cal.. Mrs Cal, and finally the magnificently ornate… Mars’ Rover Rover. Sargent Stumpf blocked traffic on Scottsdale Road so the Pack Parade could just roll south. Lights flashing we proceeded toward AZ 101. It was a bit curious how many of the Snottsdaliers chose to ignore the flashing lights of two squad cars and pass us or refuse to pull over….. onward. The way too young for Cal, Mrs Cal exited the parade and waved us off. Left we proceeded onto AZ 101 and up to highway speed. Over into the HOV lane and our escorts peeled off. We’re on our own. Richmond VA or bust.

First stop will be fuel and vehicle check in Gold Canyon AZ (AZ has ore than a Grand Canyon). The Pack, with 3 rookies is taking time to adjust to speed and traffic movements. Sort of like dancing first time with your partner. Once we get through those first awkward steps is becomes a smooth ballet. The stop at Gold Canyon was uneventful. Bio break, fuel, hydration and off we roll. We are early enough to avoid traffic and the heat. We are enjoying perfect riding weather. In fact, without the Cover pull-over we would be scrambling for cold weather gear.

Back on Hwy 60 east and our next scheduled stop is the east side of the Salt River Canyon for photos. We have about 90 miles to our photo op. Across the desert toward Miami. Heading into Superior we are passed by a happy couple on their non-Harley mini-bike. They waved and pointed… must have been someone’s birthday or newlyweds… or both. Found out later is was uncle Gosh. We experience couple of small mountain climbs and through the never ending city of Globe. Once out of Globe we begin the slow sneaky climb before dropping into the Salt River Canyon. The weather remains spectacular as the temps, because of our climb, hover in the low to mid 70s. the road winds through the desert scape. In no time we begin to wind, literally hair pin turns, down into the Canyon. Never ending switch backs before reaching the canyon floor where we cross the Salt River and immediately climb out of the canyon. This can be a rather adrenaline inducing ride up as the switchbacks are less pronounced and the turns more inviting. It will be telling to see how long we wait at the lookout point for the Mars’ Rover Rover. Papa and Cal pull off at the lookout. Before kickstands down Lone Star and Paco arrive and a few seconds later in comes the Mars’ Rover Rover! Perhaps being powered by all of the sponsors assisted with extra horsepower. The photos were spectacular and the views were appreciated.

Those who haven’t experienced a ride down into and back up and out of the Salt River Canyon on Hwy 60, should find the time. 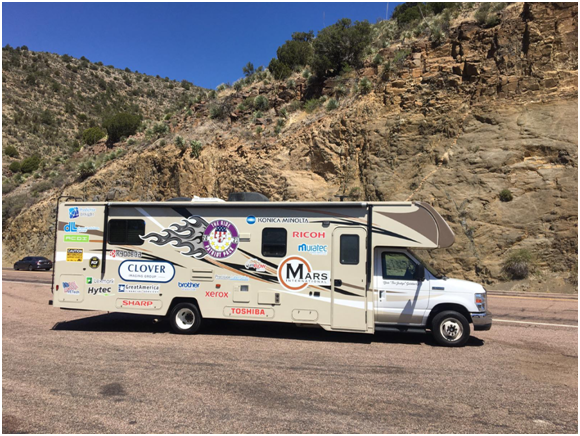 Back on the trail we continue climbing east. Soon we are in the other world of Arizona. Green terrain with towering Ponderosa Pines. We will make our way through Sho Lo Arizona and find fuel in Springerville AZ. On the east side of Springerville we stop for fuel and hydration. A decision is made to get something to eat in Pie Town NM so we saddle up and move out. We are heading east and down from the mountain ridge so our temps seem to continue to stay below 80. It is just perfect riding weather. Hwy 60 is a wonderfully lonely road. As we approach New Mexico it becomes quite desolate. Next time we need drone coverage of this pack of motorcycles and the ornately adorned Mars’ Rover Rover rolling through the high desert completely isolated from the rest of humanity.

A couple of old and thriving Native American communities are between us and Pie Town. About an hour later we roll into Pie Town. If you look on Google Maps you may find the 4 buildings. Two of which are Pie shops. The Pie Town Pies proprietor saw us coming and when Papa entered the building there was a round table with 8 seats and cold water waiting! Service with a smile! There is a lot of Shit to buy in this establishment… no mother, I am talking about properly labeled products. There was literally a shit load of Shit to buy at the spice counter.

Most ordered a breakfast type of meal. A couple ordered hamburgers but… all with pie. One rider ordered the Continental Divide Hotdog… AND NO PIE! This may lead to a shitty outcome.

The Pack was delayed in departing for two reasons. The wonderful hospitality (that’s code for an audience for the Judge) and…. not lying…. we have photographic evidence…. Santa and his wife walked in to have some pie. That’s how famous are these pies. Santa!! Yes Virginia, there is a Santa. 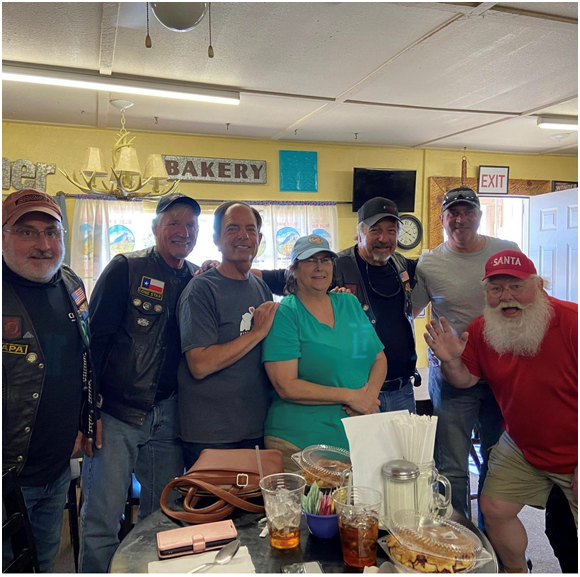 90 minutes later (a lifetime on a motorcycle tour) the Pack mounts up and continuous east on US 60. Next stop is fuel in Socorro. There US 60 heads north with Interstate 25 for a few miles before heading east again at Bernardo. Before all of this we will continue to decline off the White Mountains and across the flat desert plains of central NM. The Pack had an unscheduled stop in Datil NM to stop and make a deposit at a convenience store. Soon all was well and off we rode. We will ride past the VLA where our government is actively listening to or for (your choice) aliens. Not those aliens… the ones with space ships. VLA is an acronym. Who knows without Google cheating?

A couple of hours later we descend rather steeply into Socorro and Papa notices the excellent fuel consumption numbers. He decides to forgo the Socorros stop and head north on I25 to find fuel in Bernardo, where US 60 heads east. This will allow for the Pack to sleep on half a tank of fuel. Why you ask is this important? Ultimately it is not….

The pack exits at Bernardo and climbs to the top of the railroad overpass to stop and wait for the Mars’ Rover Rover. I 25 will tax the max running speed of the Rover. The Mars’ Rover Rover spots the Pack and off we continue east looking for that elusive fuel stop. Bernardo is a dry hole. Turn around or press on? Papa presses on. Next stop… (take some time and look at a map of US Hwy 60 as it proceeds east from I 25. Papa is in decision making crisis mode as we are approaching 200 miles since the last fuel stop. Ahhh Abo is the next town… the next dry hole…. Now the map shows Montclair New Mexico about 20 miles out. If that city is devoid of fuel then we are in problem solving mode! The sun is setting, the temp is dropping and Papa is asking the fuel gods, out load, to be present in Montclair. The odometer said 223 miles when we found a fuel station!!!!! It was timely… just as Papa planned.

The Pack is about 90 minutes from the hotel but will not make it before sundown. We will soon exit US 60 and merge onto US 54 for the final leg into Santa Rosa and our hotel. A decision is made just outside Vaughn to stop and don cool weather gear so as not to be miserable for the final 45 minutes. Darkness descends as we proceed north east into Santa Rosa. We can see lightning in the mountains north of Santa Rosa. Because of darkness the Pack cannot see just how far north are those mountains. Under the cover of darkness the Pack arrives in Santa Rose and finds the hotel and parks for the night. The town is shut down. It is after 9:00pm. Check in is smooth and the Pack meets back at the Mars’ Rover Rover for some kickstands down refreshments. Taj Rover crosses Route 66 as a pedestrian to return with truck stop pizza… this is live’n!!! We plan for “wheels rolling” at 7:00am. We must retire early.

Back to the morning…. the Pack was waiting for Bishop Staker’s blessing. Papa was fussing with his bike and chatting with Big Red a bit. Papa’s middle granddaughter, Ayla, came over to offer a big hug (this 7 year old gives some of the most world class hugs ever). She stepped away and said: “Um ahhh Papa, why do you do this every year?” (Code for, why do you leave us for two weeks? …and you better have a good reason).

Papa explained that we have a friend from the industry who had a daughter named Jillian. She died young from cancer. He father saw how devastated the families become and decided to create a charity to support those families. We ride across the country and raise money to help these families. Do you understand? “Oh, then it is a good reason… ok!” Another hug… I looked over at Big Red and we were both affected by the neighbor who must have been chopping onions.