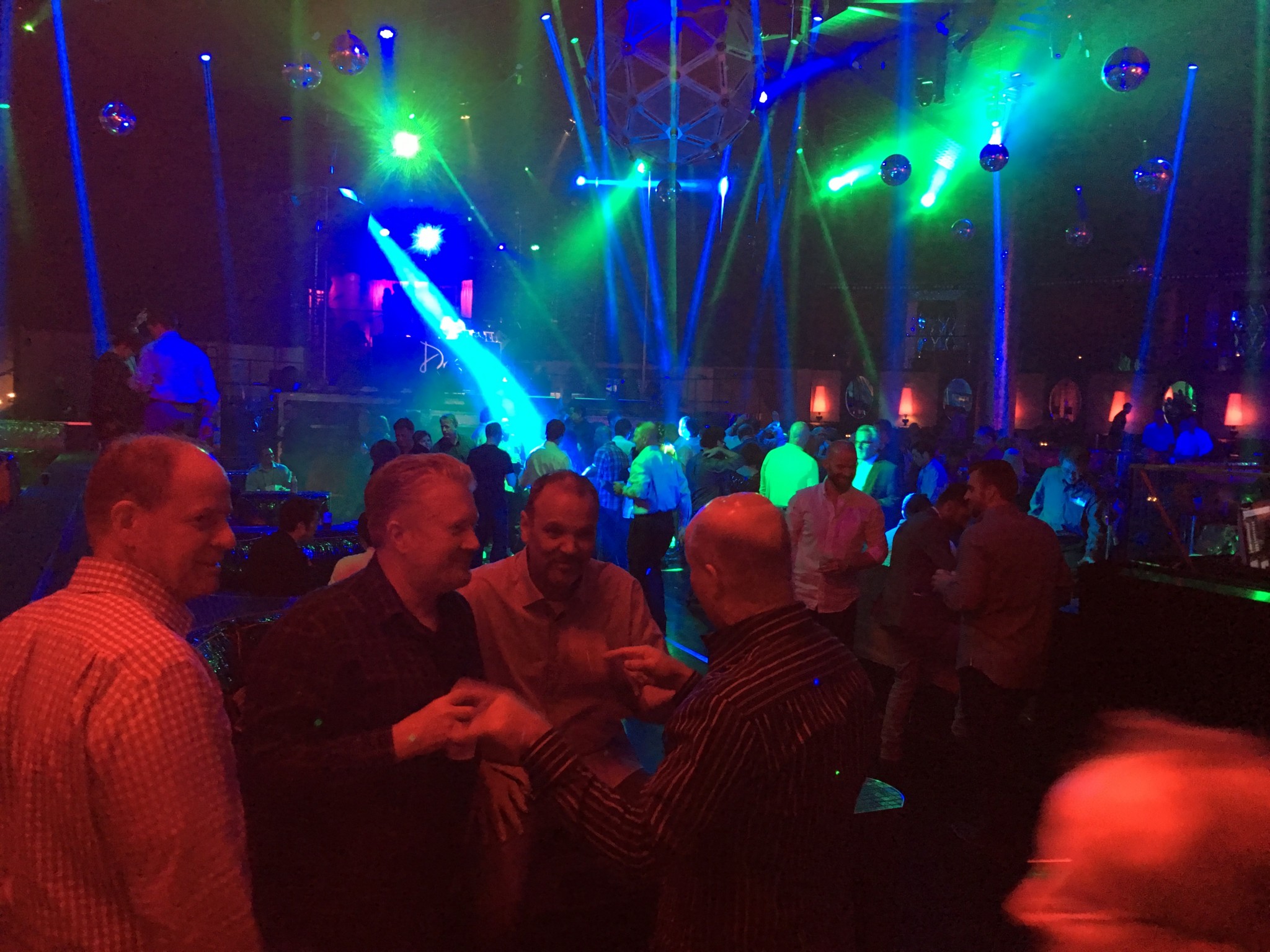 By Andy Slawetsky – It’s been 18 months since their previous show and last week, Ricoh held their ConvergX dealer conference at the Aria hotel in Las Vegas.

Ricoh is a top tier player and they acted like it, providing their approximately 1,400 attendees with a glimpse at their future and taking the opportunity to remind them how critical they are to Ricoh’s strategy.

A flurry of press releases preceded the event with a refresh of their MFP line and new printers. There’s a strong focus on the redesigned user interface (UI) and their Smart Operation Panel (SOP). The clean display, originally shown at the last ConvergX is a revolution for Ricoh sales people that had been marketing that dated blue/yellow UI that was not much different than the one I sold in the 1990s. 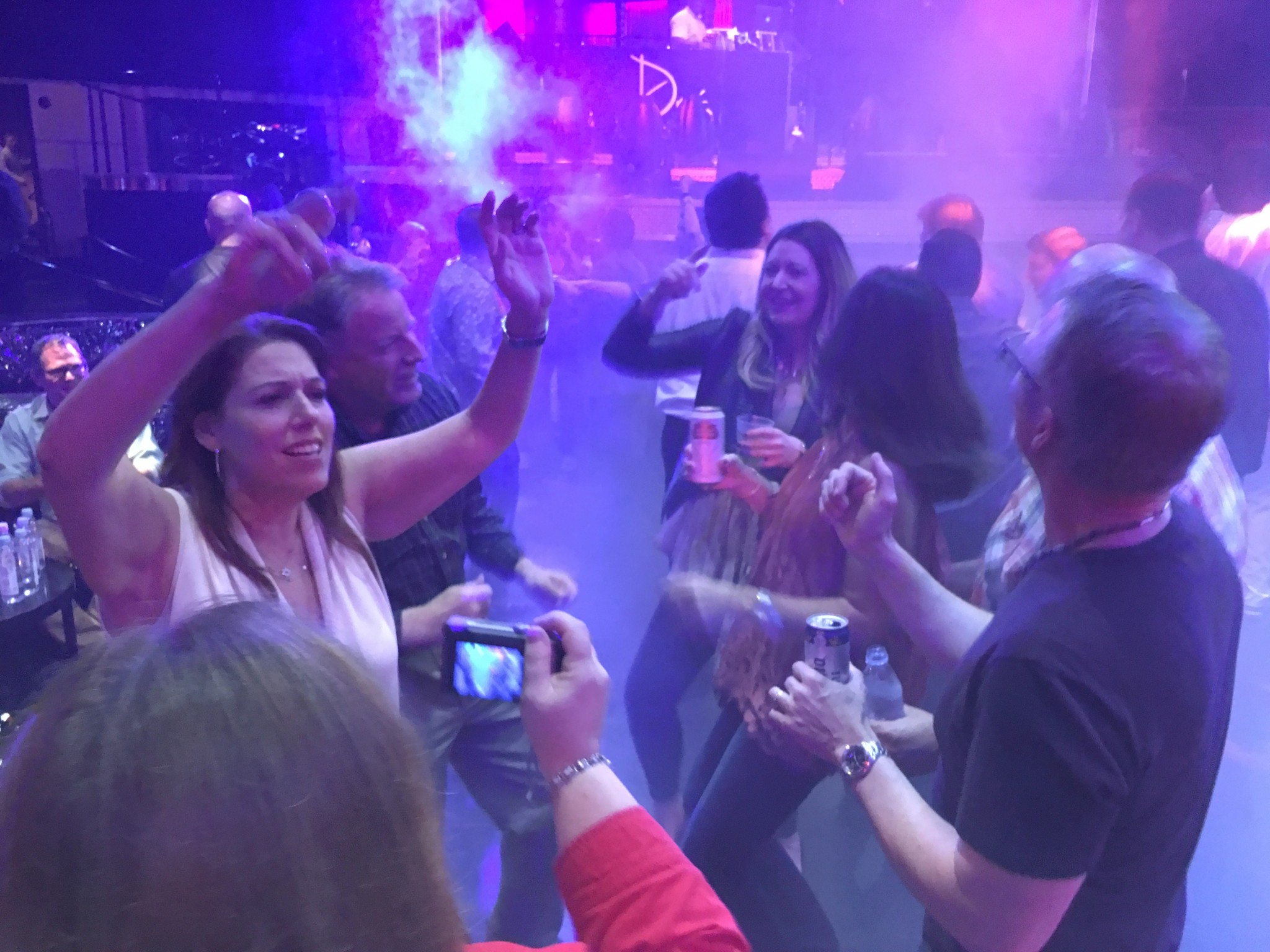 For customers that still like the old screen or are more comfortable with it, there’s a classic view setting that allows them to use the old version they’re used to.

The UI is much more logically laid out and the high-tech clean design will surely catch customer’s eyes. It looks much more like a tablet or smart phone, which should help with their growing App strategy. 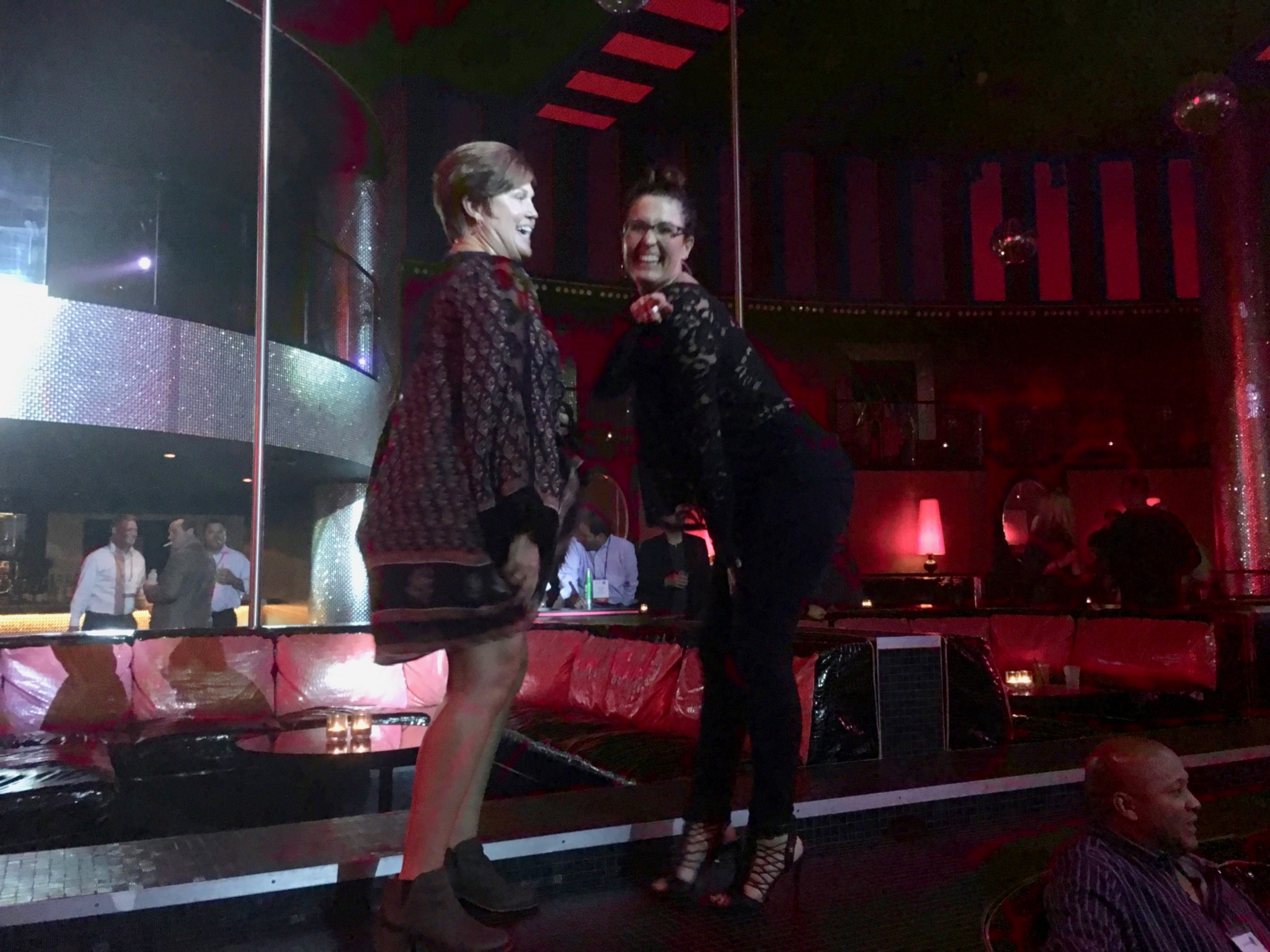 The conference began with VP Jim Coriddi taking the stage to officially kick things off. Jim talked about how much the show has swelled in size as dealer executives now see the value of not just attending themselves, but they’re now bringing a great number of their sales teams. Several dealers brought almost 20 people to the event. 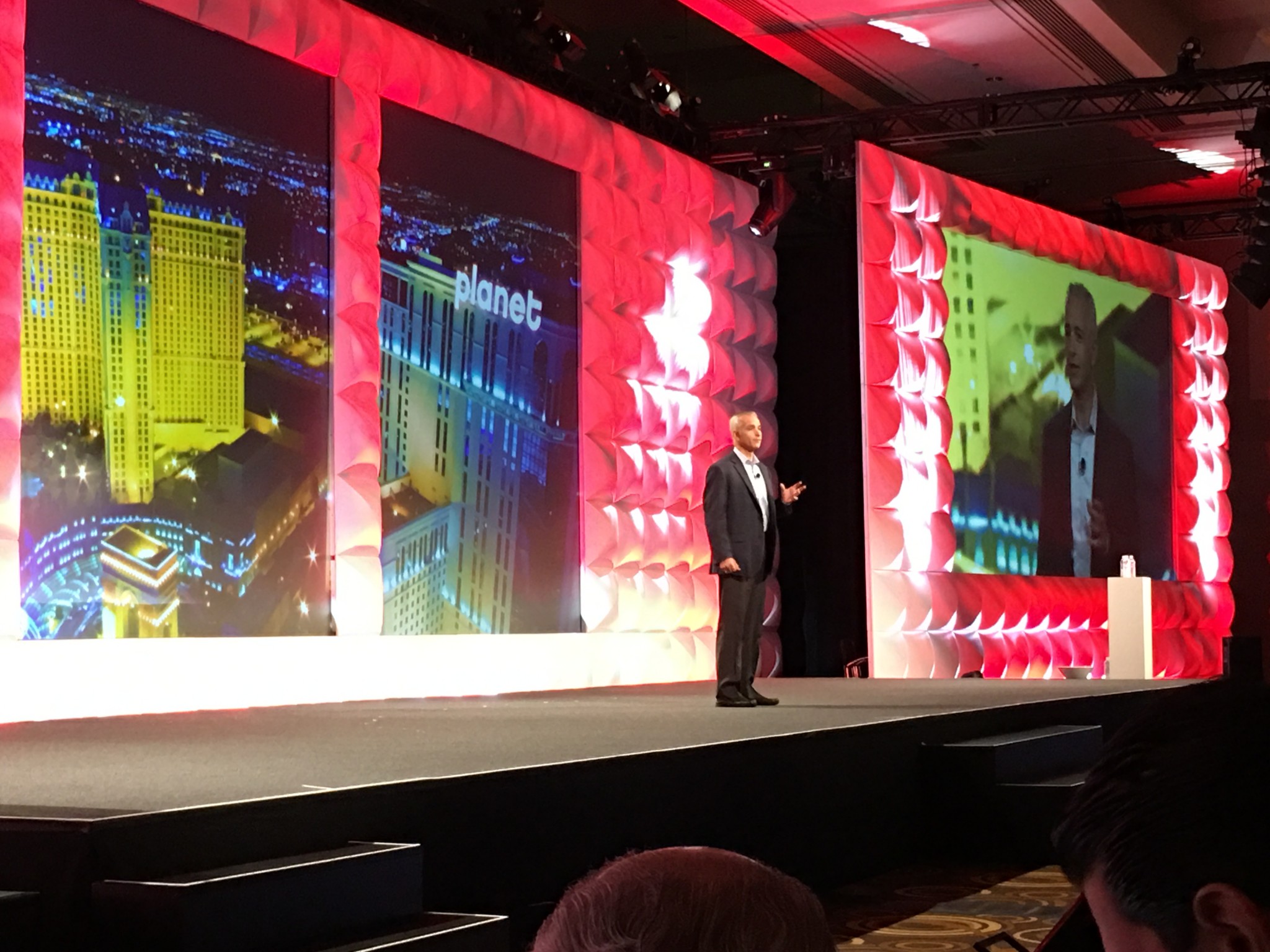 Encouraging dealers to bring their sales forces to these conferences is extremely savvy. I’ve always thought it was a shame that the OEMs spent so much time, effort and money on these events and the feet on the street never had a clue what’s going on behind the scenes. To the rep, it’s just another brand in their pitch book.

But bring them to a dealer conference like this and think of the benefit. The sales person gets to go to Las Vegas, they’re fed very well, they drink from an open bar, experience incredible entertainment and sit through presentations about the strength and vision of Ricoh. They’ll meet senior executives and see all of the technology and partners under one roof and they’ll rub shoulders with their peers, some of whom are wildly successful at their jobs.

When they go back to their dealership, which brand will they sell, Ricoh or the other brand? I have no doubt bringing the reps to events like these builds a tremendous amount of loyalty.

Next, Ricoh CEO Martin Brodigan took the stage to talk about Ricoh. He discussed current financial challenges and although he didn’t get too into it, he openly acknowledged Ricoh’s poor financials and some of their recent struggles. These issues are not unique to Ricoh; several of the major OEM’s have had a rough quarter.

Click here to view all my photos and videos

Martin has done a great job steadying the ship over the last few years. He took over at a time when Ricoh was reeling with internal strife that occurred when they blended IKON into the Ricoh culture. I did find it odd that he was called off to Japan in the middle of the dealer meeting. Weird timing.

After the Key Note, we took a private guided tour of the Ricoh product fair where I saw a significant upgrade in the layout from the previous ConvergX. This year, they added inflatable pods that served as presentations rooms throughout the product fair. It was pretty cool, although a bit claustrophobic in the ones I attended, mostly because they were very full. If you didn’t want to sit in the pods I think there were overflow rooms outside the product floor. I can tell you, many of these pod sessions were packed. 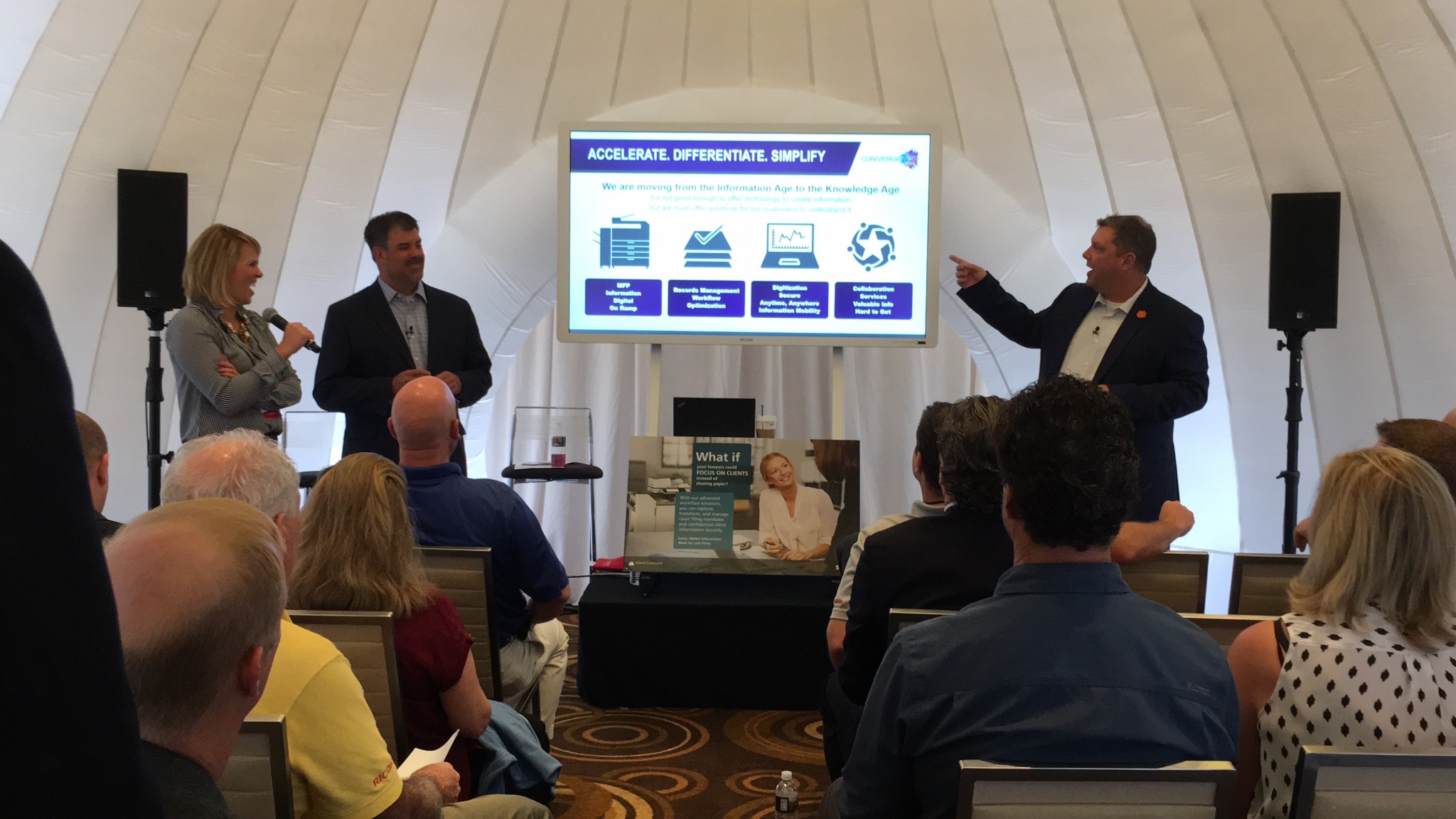 Ricoh had a bunch of future product on the floor and unfortunately, my product walkthrough video is unusable as they were mixed in with current devices. It would make it easier (for me) if Ricoh called these devices out with signage, as it was difficult to tell what was current and what’s not unless you’re constantly referring to “the list.”

That said, this was probably the best product fair I’ve seen from Ricoh. It had a nice layout and a good flow that gave most exhibitors excellent visibility. 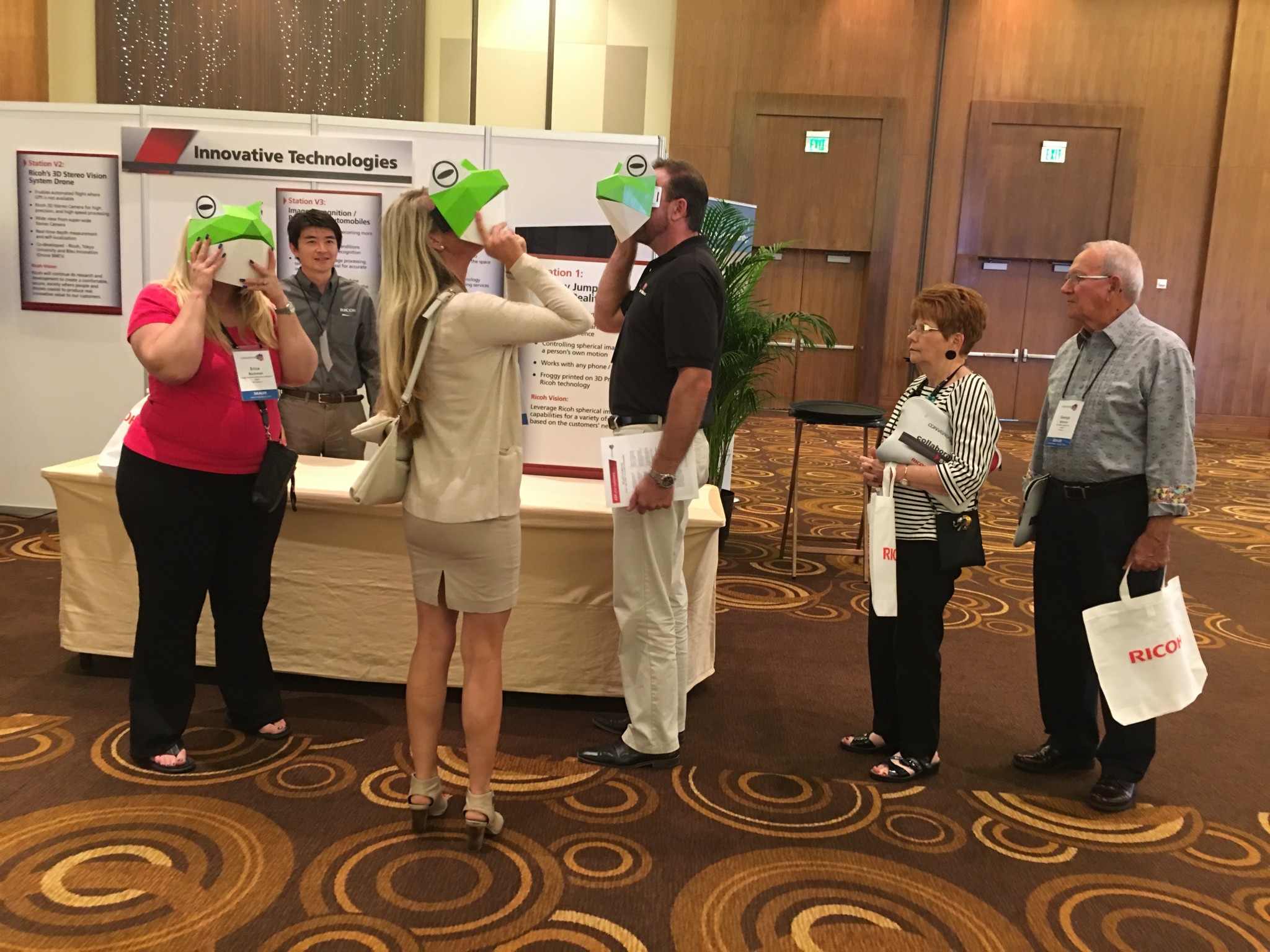 Ricoh is clearly pushing collaboration and instead of being hidden away in a small booth like last time, projectors and white boards were nicely integrated throughout the show in over a dozen locations. Ricoh mentioned that the crystal clear giant screens in the Keynotes and awards ceremony (and World Series) were showing images from Ricoh projectors. 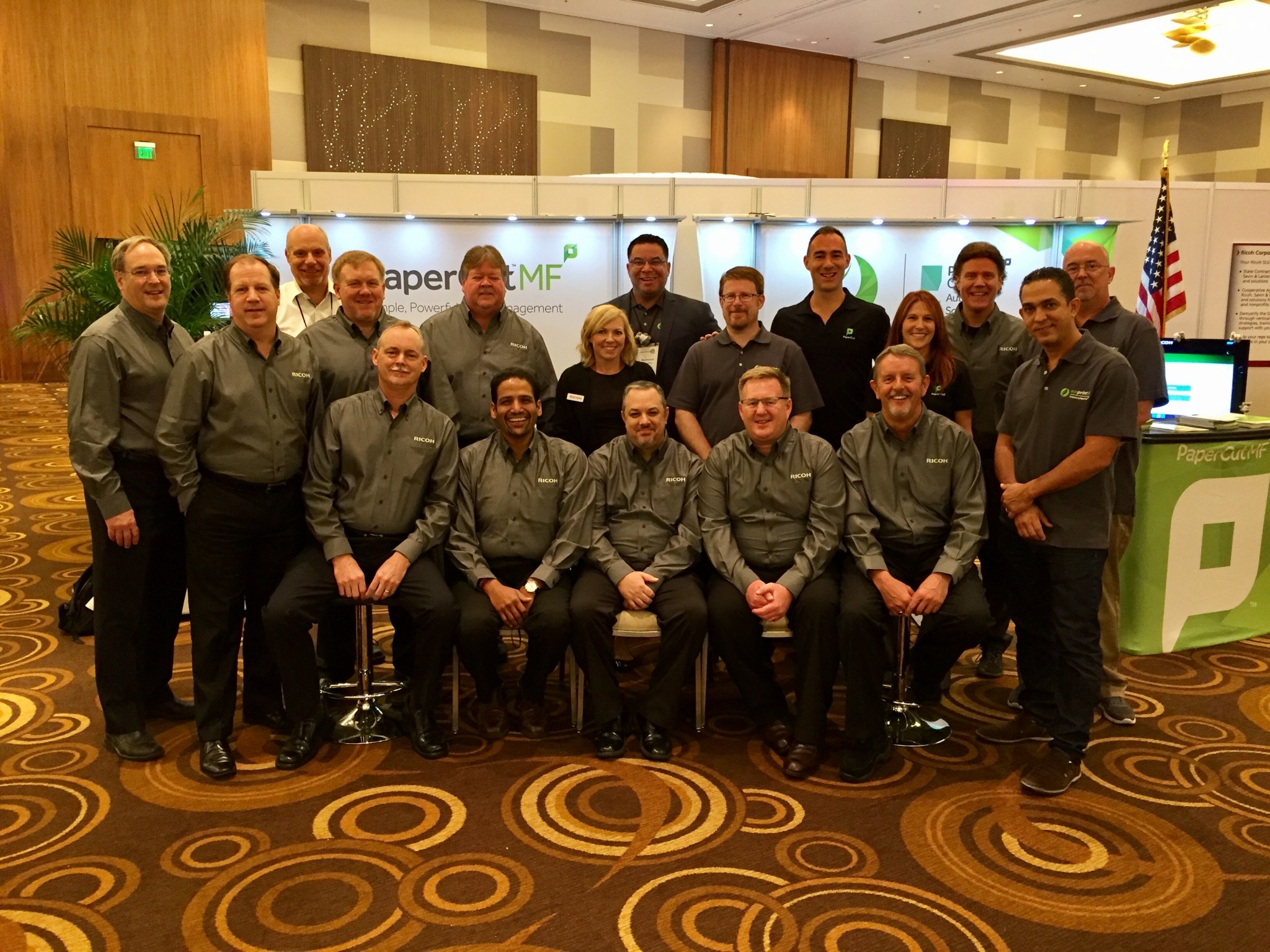 There was a nice mix of partner companies on the floor as well. Ricoh has a large number of leasing companies available for their dealers including GreatAmerica and others. 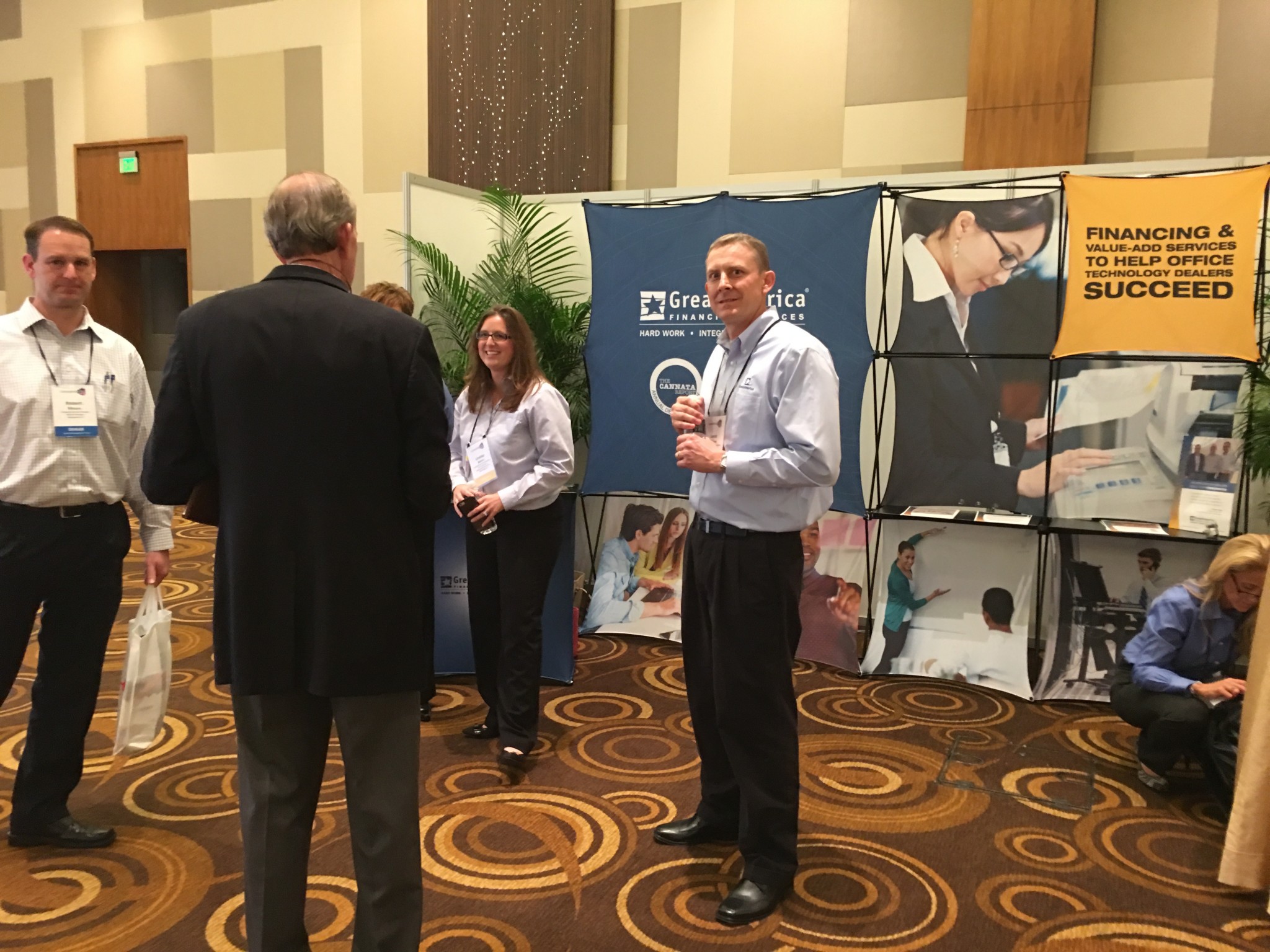 ESP had a large booth in the front with their power protection products and PaperCut was nearby with another really nice booth and all the koala bears you could stuff in your bag. 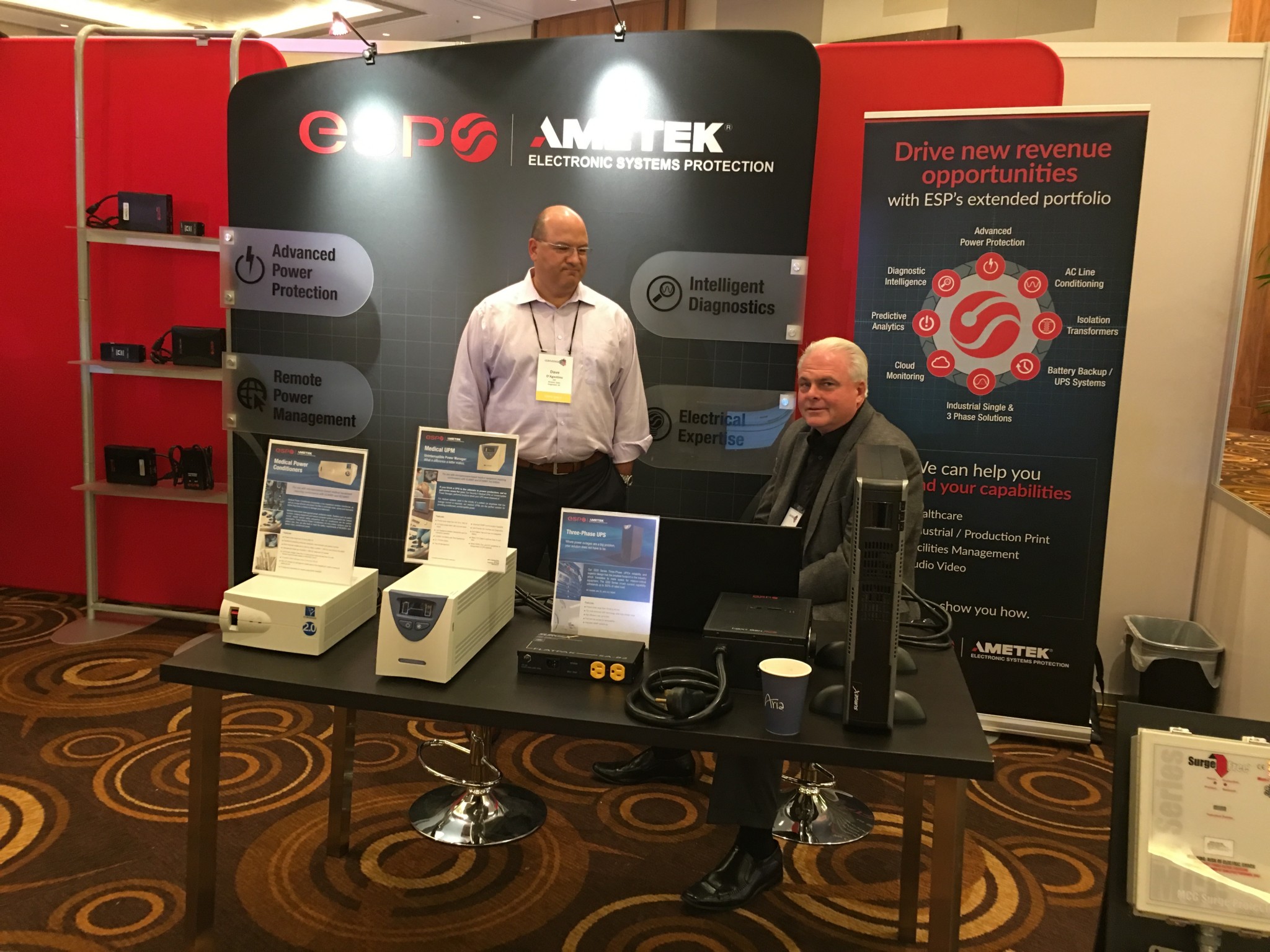 There were ECM companies like DocuWare showing their solutions as well as EFI, fresh off their record earnings with a nice booth near some of the new hardware. 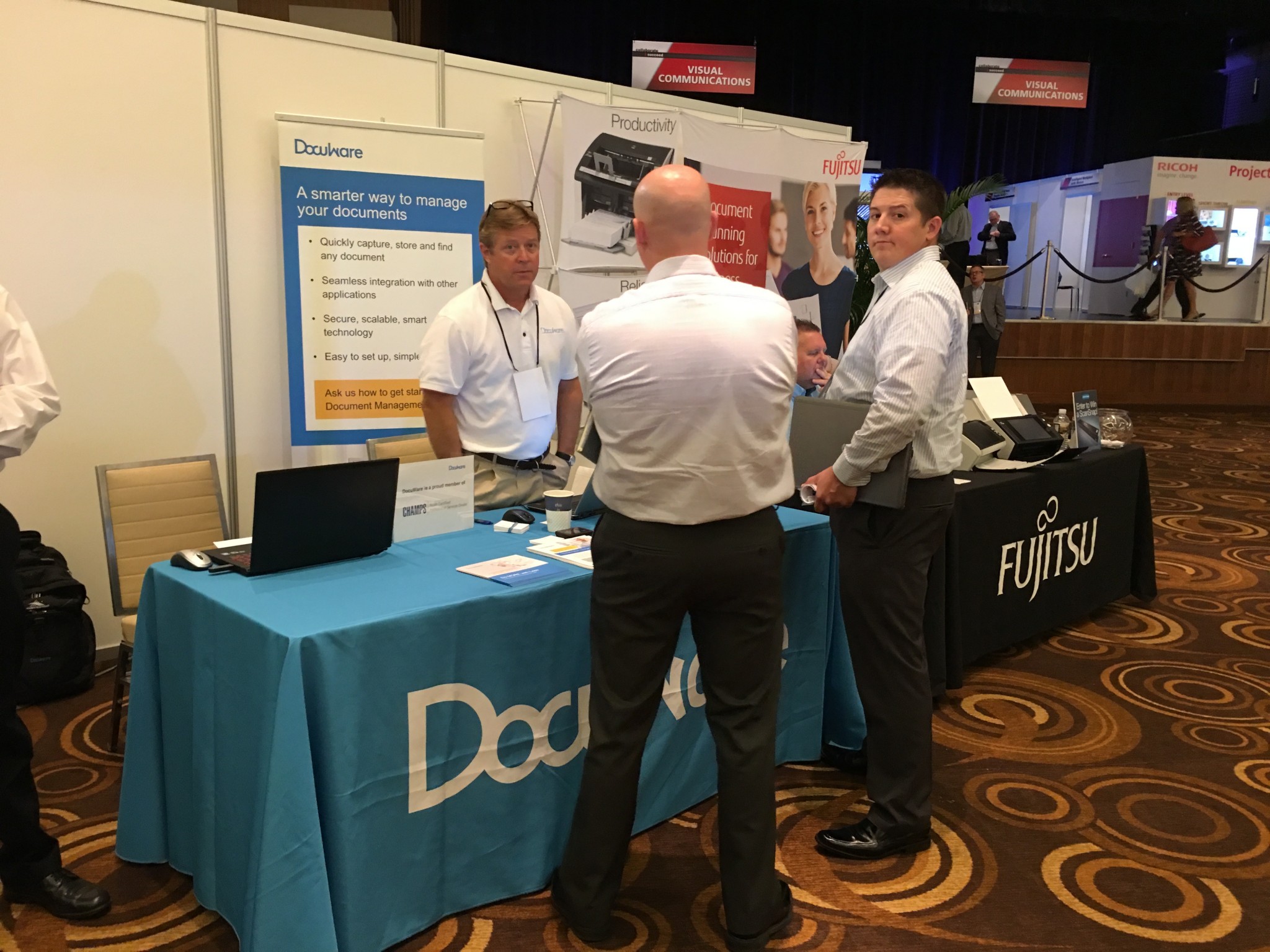 There were also some training and social media vendors like Darrel Amy from Dealer Marketing on the floor. Ricoh had a very nice mix of partners. 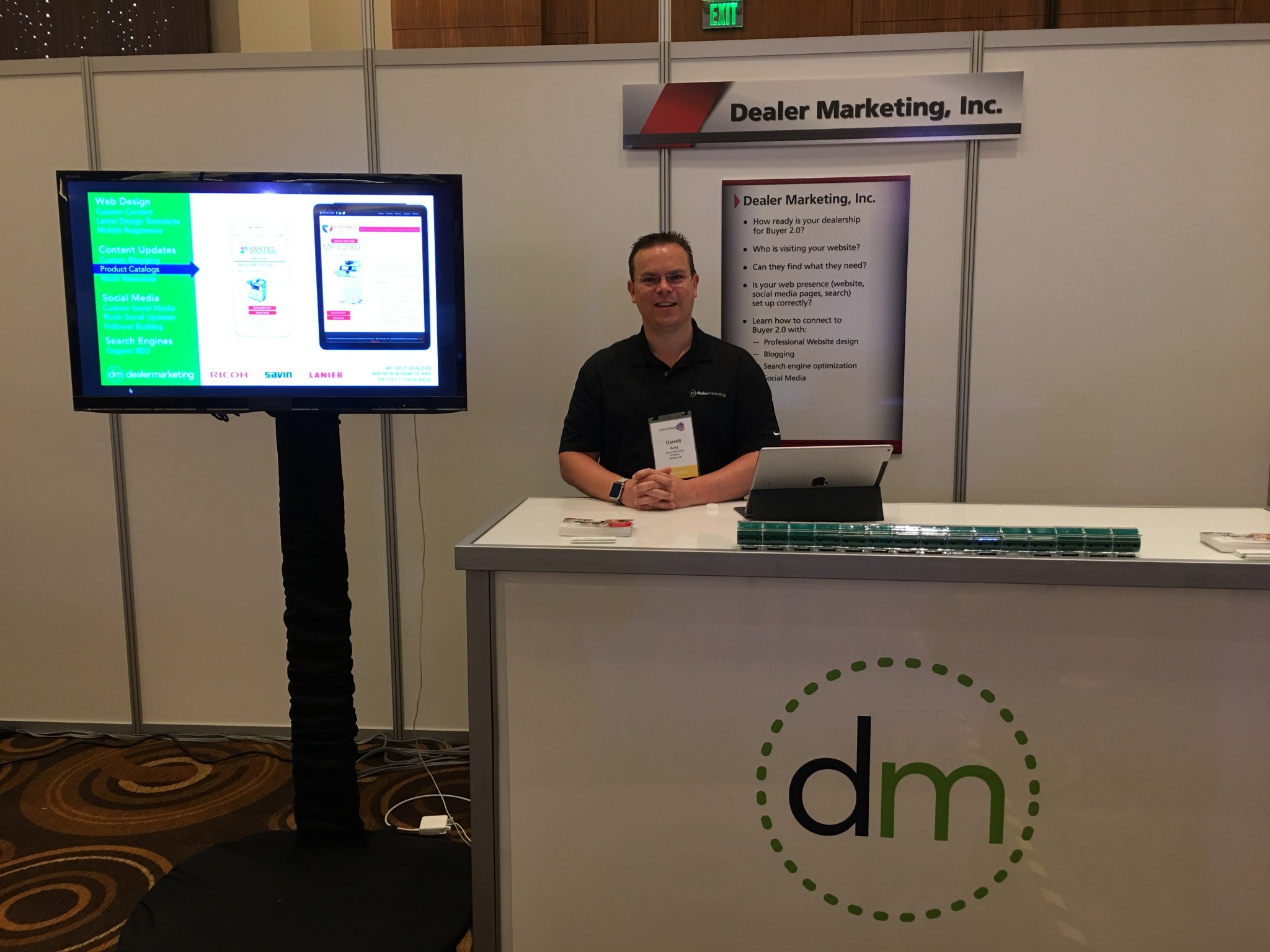 The production area was located towards the back. There was some big iron and wide format on the floor in there. Ricoh has much bigger devices than these but as dealers don’t sell these products, they weren’t there. Ricoh has some of the biggest printers around but at this time, products at that level are not sold through the dealer channel. 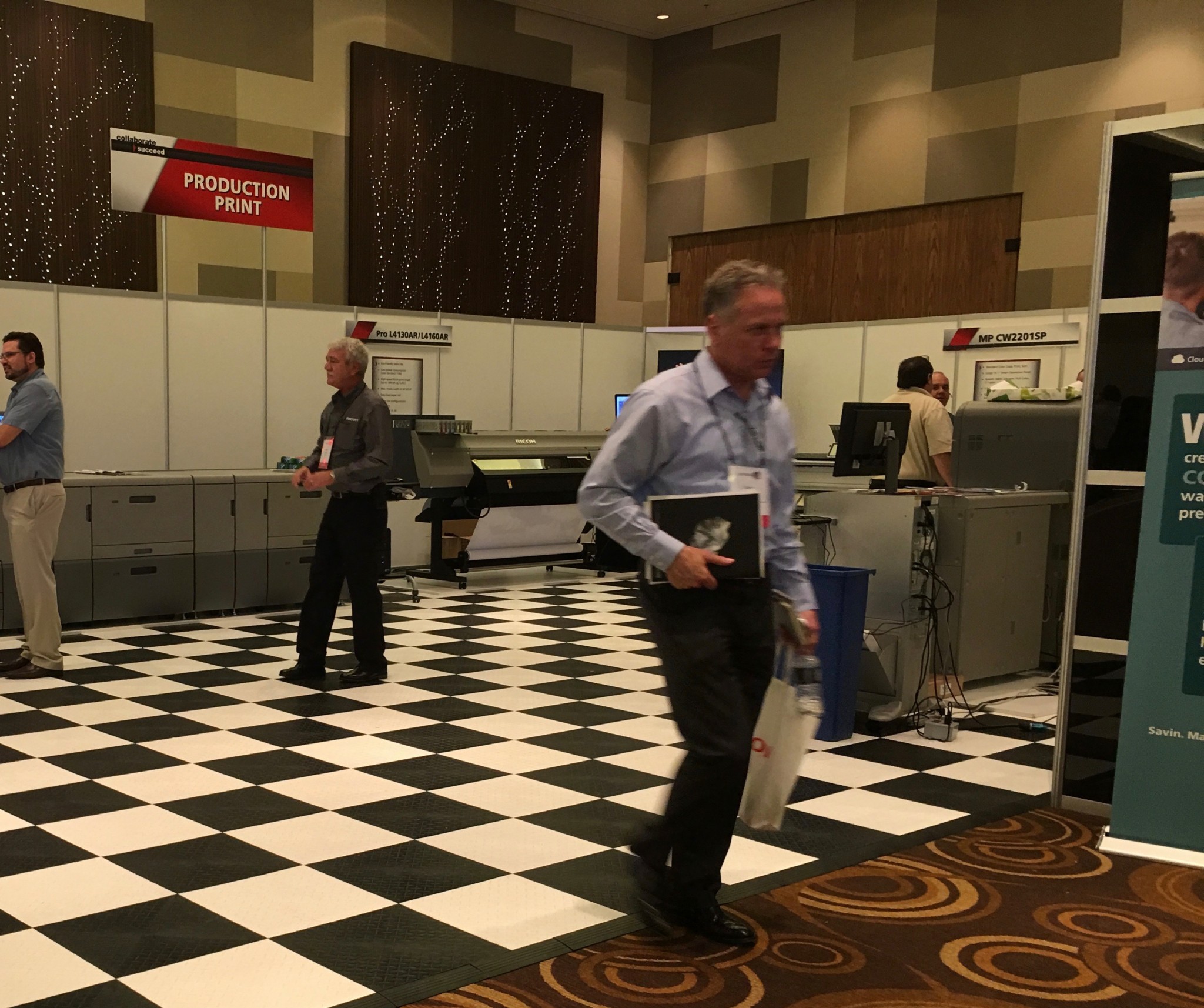 The second day began with VP Steve Berger once again talking to attendees about Ricoh innovation. Steve has worked in Japan for the last several years and he comes over for these conferences to talk about what’s going on behind the scenes. Steve works in a global group that, among other things, keeps Ricoh Japan closely tied to not just their subsidiaries, but to their resellers.

Jeff Elkins of Advance spoke about how Ricoh sent a team of engineers to his Baltimore dealership to learn about how dealers sell the devices and what they need from an engineering standpoint. Ricoh is very keen to listen and learn from their dealers, who now account for 37% of their US sales – a far cry from the 19% they were at just a few years ago.

Ricoh is also about to overhaul their customer portals. These locations will be cutting edge and fully customizable to the dealer using the facility from the digital welcome at the entrance to the signage throughout. These facilities provide dealers with perfectly maintained places where they can take customers to see the latest Ricoh technology.

Oh yeah, they also had Sugar Ray Leonard present. He was incredibly inspirational and I couldn’t help being brought back to my childhood during the clips they showed reminding me how I watched on my shag green rug on my giant 19” antenna TV. I got goose bumps from him, he was amazing. 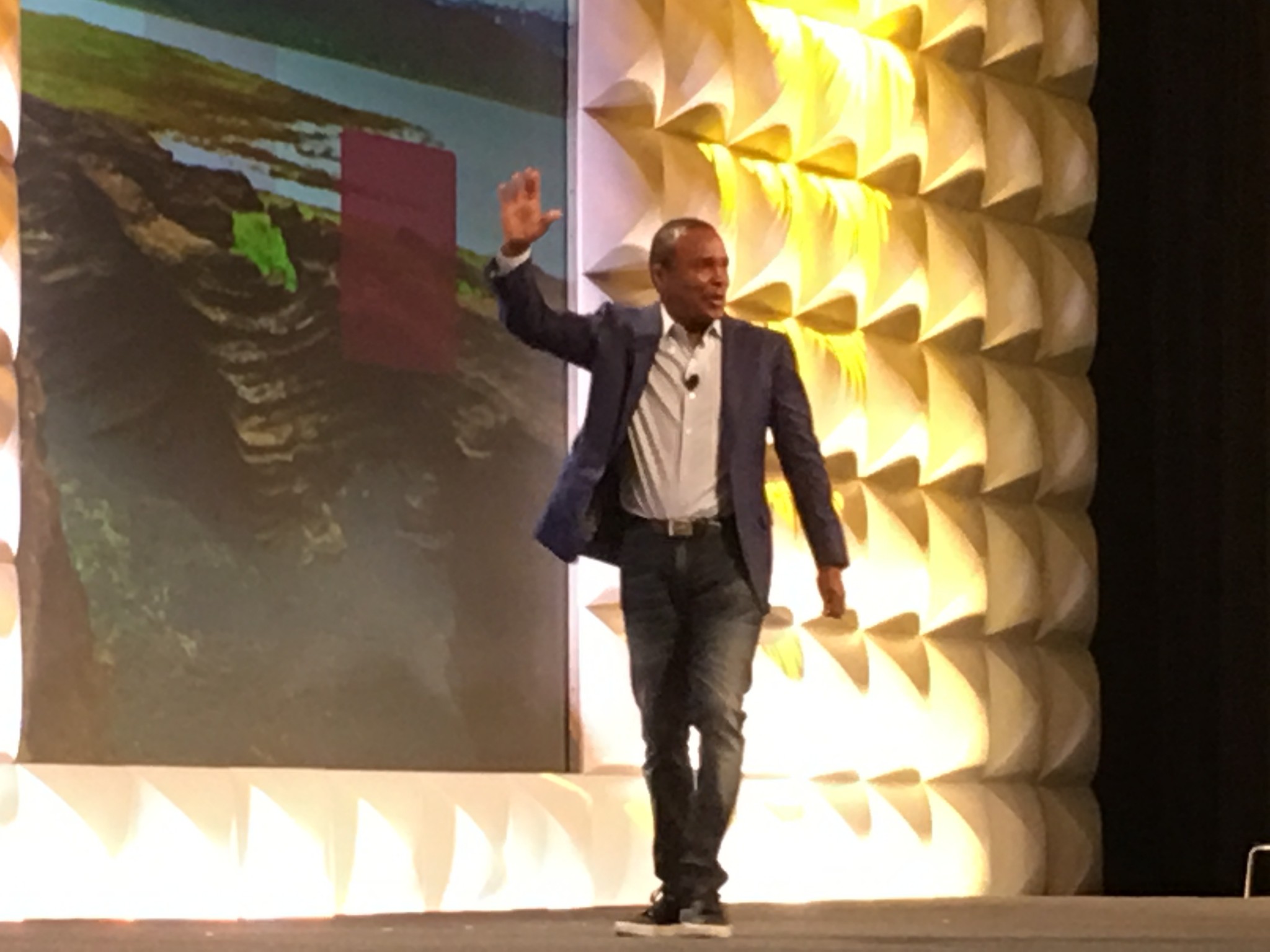 Ricoh reminded dealers of their importance to their big picture throughout the conference presentations. They proudly touted the award they just received from The Cannata Report, being rated highest by dealers for the second consecutive year. They were also just recognized by IDC as a leader in high-speed inkjet.

The one complaint I heard had to do with Ricoh’s constant push for dealers to become single line. The dual line dealers are tired of hearing it. They get it and understand the benefits, but they have their own reasons for keeping multiple lines. It’s understandable to recognize single line Ricoh dealer achievements and mention the benefits at a show like this but it came up quite a few times in presentations and I guess it was wearing on a few people. Keep in mind, that’s not my complaint; it’s the dealers’. 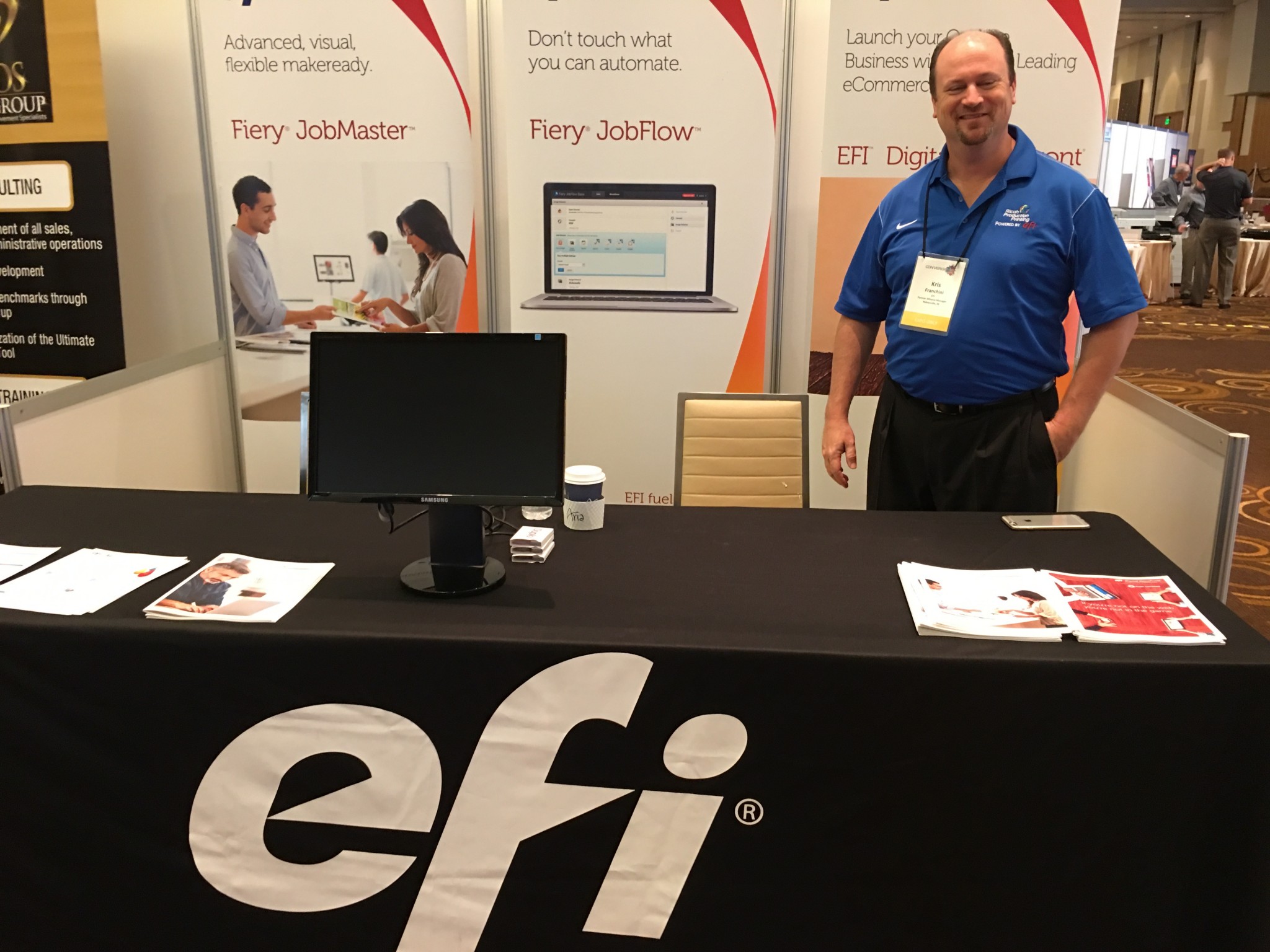 The event concluded with an awards dinner and then the after party. With 3 brands (Ricoh, Lanier and Savin) there was plenty of recognition to go around and you can see most, if not all of the winners in my photos. It felt like about 75% of the awards were won by TGI Office and POA (CONGRATS!). They really killed it with Ricoh this past year, as did many others. 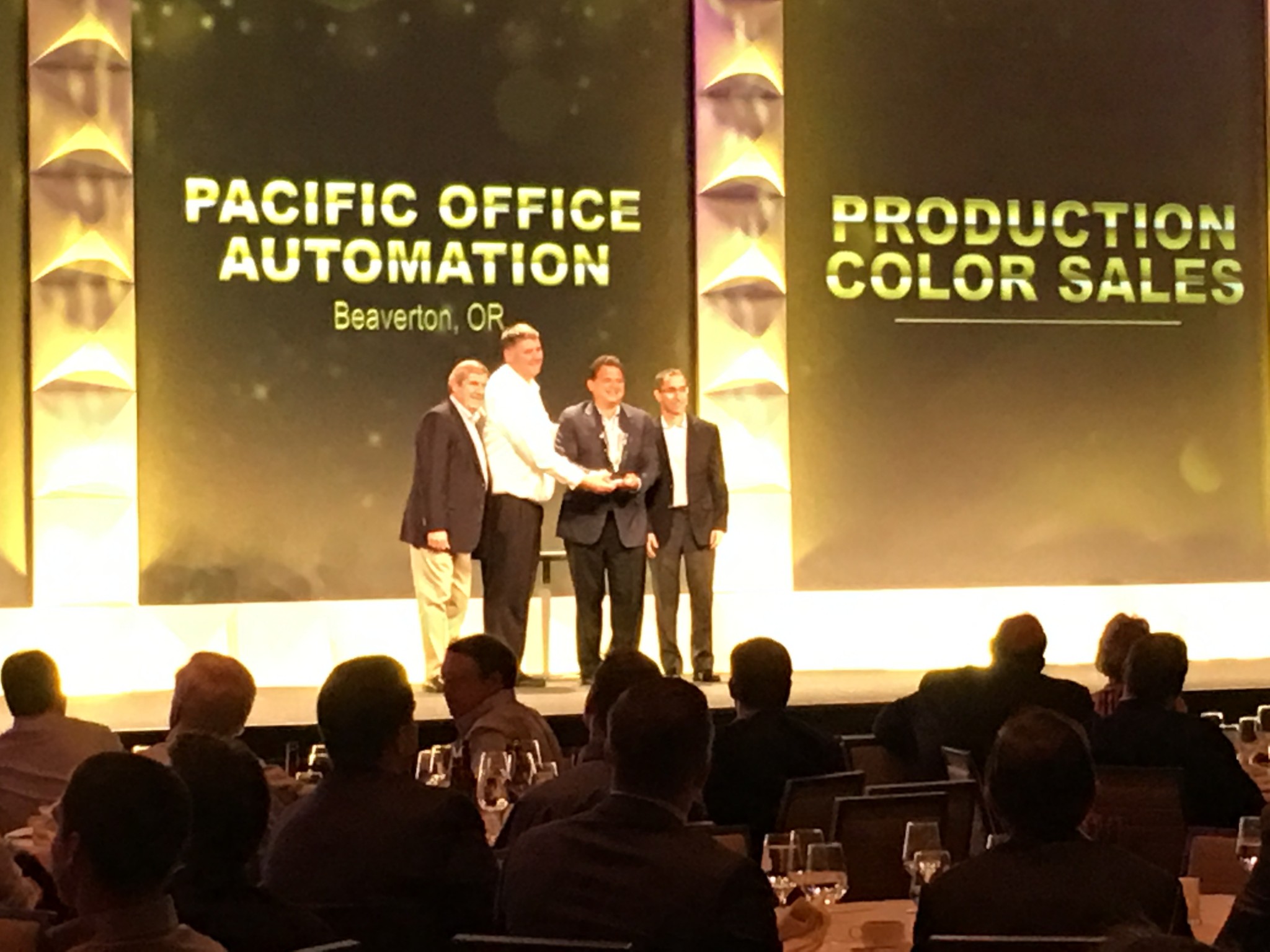 The most meaningful comments I heard were not from Ricoh, but from their dealers. Mike McGurk of PROCOPY told me it was the best Ricoh event he’s ever attended. Others I spoke to were also very happy with the event and Ricoh in general. 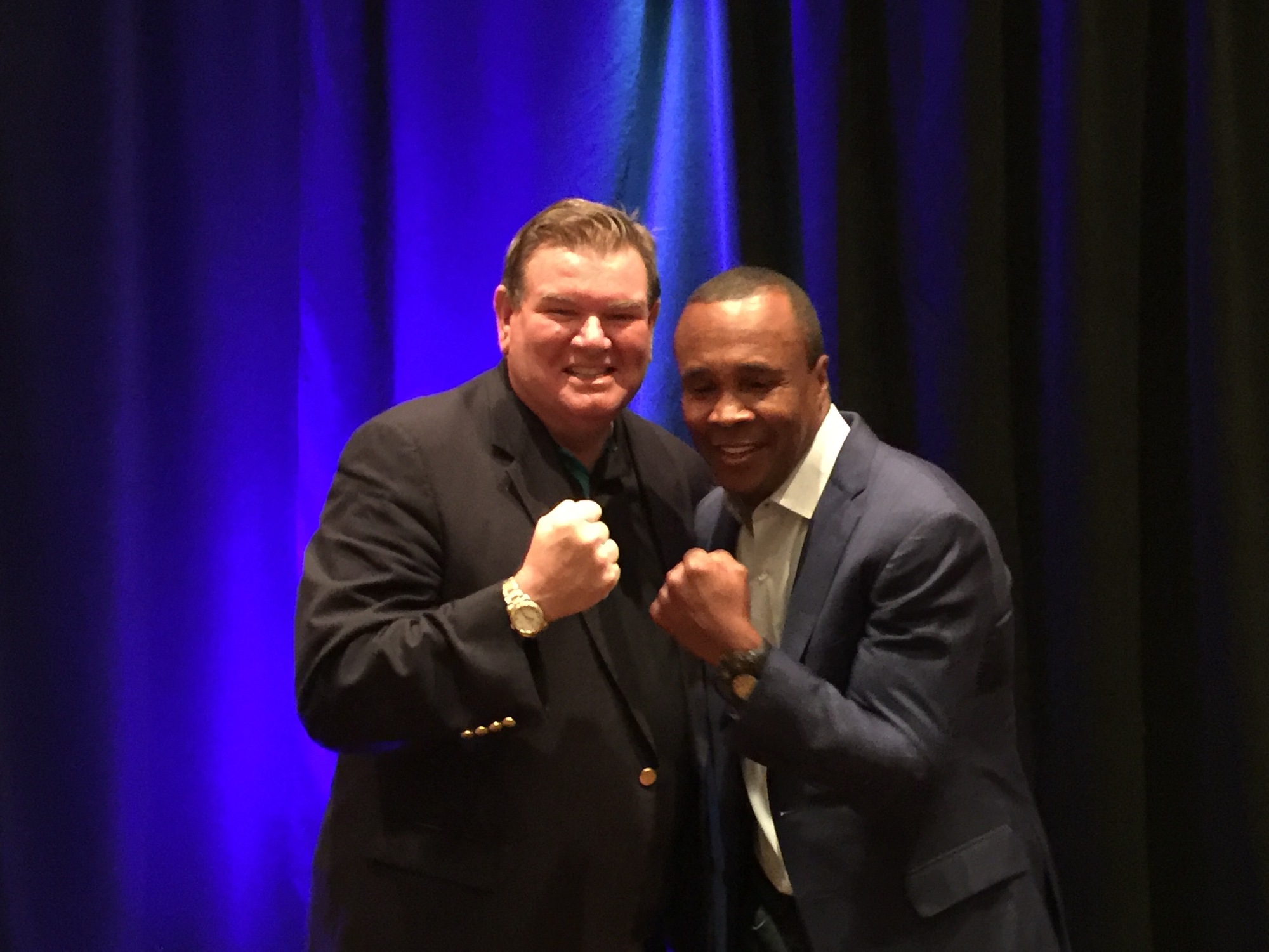 Ricoh has clearly been engaging with their dealers and they seem to be working more closely with them than many other brands do. The CHAMPS program is an example of this. CHAMPS allows dealers to become certified in specific areas such as production, MPS, etc. Once certified, the dealer has Ricoh’s full arsenal at their disposal, including sales support where Ricoh experts can be brought in for expertise.

Click here to view all my photos and videos

Overall, it was a great event; a fantastic facility, positive messaging and amazing people. Ricoh really connected with their dealers this time. They’ve got market share, they’ve got product, and most important, they’ve got stability. They’re listening to and working closely with their resellers and this is the happiest I’ve seen Ricoh dealers in a long time. Ricoh is a leader in the office products space and I don’t see why they won’t continue to be for the foreseeable future.