Days Market, a local supermarket renowned for its superior produce, specialty items and butcher department, sits in Heber Utah, about a 25-minute drive from the booming resort town of Park City. “Heber is a support community for a resort community,” says Carl Day, owner and CEO of the family-owned and operated Days Market. The market primarily gets its business from vacationers coming down from Park City for supplies, and has been one of the only options since 1972 until recently when a big-box retailer opened less than half a mile away.

As this new competitor was being built, Carl and his partners knew they needed to do something to increase traffic to their store, build a stronger relationship with customers and differentiate what they offered. “There’s no way we could compete on price alone, since we are unable to purchase product with the same volume as they do.” Their solution was to turn to an aggressive “Item of the Day” promotion where the price of one item in the store is dramatically discounted, sometimes to break-even levels. To help get the message out, they would produce new colorful, high-quality posters and banners every day to be displayed throughout the store.

Introducing the “Item of the Day”

With no local printer in the area to handle the job, Carl knew he needed to purchase a large-format printer to handle the work internally. To help move the program along, one of Carl’s business partners attended the National Grocers Association Show in February of 2011 and met with Canon representatives. The partner was very impressed with the versatility and quality of the Canon imagePROGRAF iPF750 and they made the purchase.

Without a design or printing background, Carl was concerned that the setup and operation would be beyond his level of expertise. “It was my responsibility because I manage all of our information technology, but I had never even seen a printer like this, let alone operated one,” said Carl. To generate a new set of ads on an a-frame signs that were placed in the stores’ front windows he used PosterArtist software, a template-driven poster creation program for PC’s designed by Canon to be used by all levels of users to create professional- posters, banners and signage quickly and easily. “I was surprised with how simple it was. There was a very easy learning curve and the same week we received the device, everything was up and running,” stated Carl. 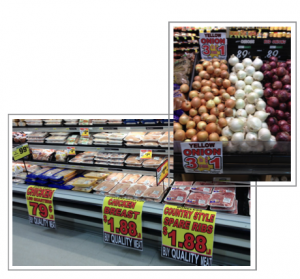 The results thus far have been incredible with traffic in the store increasing and business improving year-over-year by six-percent. Carl is excited that the imagePROGRAF printer can help provide additional services to the community as well. For example, one day a customer came to the store looking for a large Happy Birthday banner for her grandson. Carl was able to quickly design and print out a banner on the imagePROGRAF printer, charging the woman a modest fee.

“In the intermountain west, I can confidently say that Days Market was the family grocer least affected by our new superstore thanks to this program,“ Carl says. “The imagePROGRAF device has worked flawlessly since we bought it more than a year ago, with absolutely no need to call customer support,” he adds.

Canon U.S.A., Inc., is a leading provider of consumer, business-to-business, and industrial digital imaging solutions. With approximately $36 billion in global revenue, its parent company, Canon Inc. (NYSE:CAJ), ranks third overall in U.S. patents registered in 2013† and is one of Fortune Magazine’s World’s Most Admired Companies in 2014. In 2013, Canon U.S.A received the PCMag.com Readers’ Choice Award for Service and Reliability in the digital camera and printer categories for the tenth consecutive year, and for camcorders for the past three years. Canon U.S.A. is committed to the highest level of customer satisfaction and loyalty, providing 100 percent U.S.-based consumer service and support for all of the products it distributes. Canon U.S.A. is dedicated to its Kyosei philosophy of social and environmental responsibility. To keep apprised of the latest news from Canon U.S.A., sign up for the Company’s RSS news feed by visiting www.usa.canon.com/rss and follow us on Twitter @CanonUSA.

†Based on weekly patent counts issued by United States Patent and Trademark Office.

All other referenced product names, and other marks, are trademarks of their respective owners.