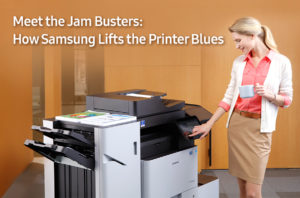 Printers are instrumental to modern business – it is almost impossible to image the modern office without them. However, when they malfunction, they can become a source of great frustration. A simple jam can bring the day to a screeching halt, leaving tempers frayed and causing instant bottlenecks for scores of employees.

In popular culture, printer errors have been satirized and parodied, echoing the great vexation felt by anyone who has ever tried to troubleshoot a seemingly incomprehensible paper jam problem. In a memorable scene from the cult 1999 movie Office Space, three disgruntled white-collar workers take out their frustrations on a frequently jamming printer, smashing it to smithereens with baseball bats.