A Day in May

By JB Brostrom – The Pack had a 9:45 departure today. That’s like sleeping in, on a Saturday!!! The Mars’ Rover Rover is naked and sitting idle in the hotel parking lot. It is waiting for its driver to return her to Phoenix. Rover himself is securing his mini-Mars’ Rover Rover for his short drive back to New Jersey. Our mission this morning is Stone’s Office Equipment and their “Day in May” celebration. Rover will make an appearance. The Judge will be absent as her is negotiating a deal between CIA and KGB… or something akin to that.

The Pack are wheels rolling at 9:45 and will make the short 6 miles run across the Richmond VA metro to SOE. The Pack rolls in after Papa channels his inner Boner and makes a firm stand to hold up on-coming traffic allowing the Pack a safe space for the u-turn needed to enter SOE. 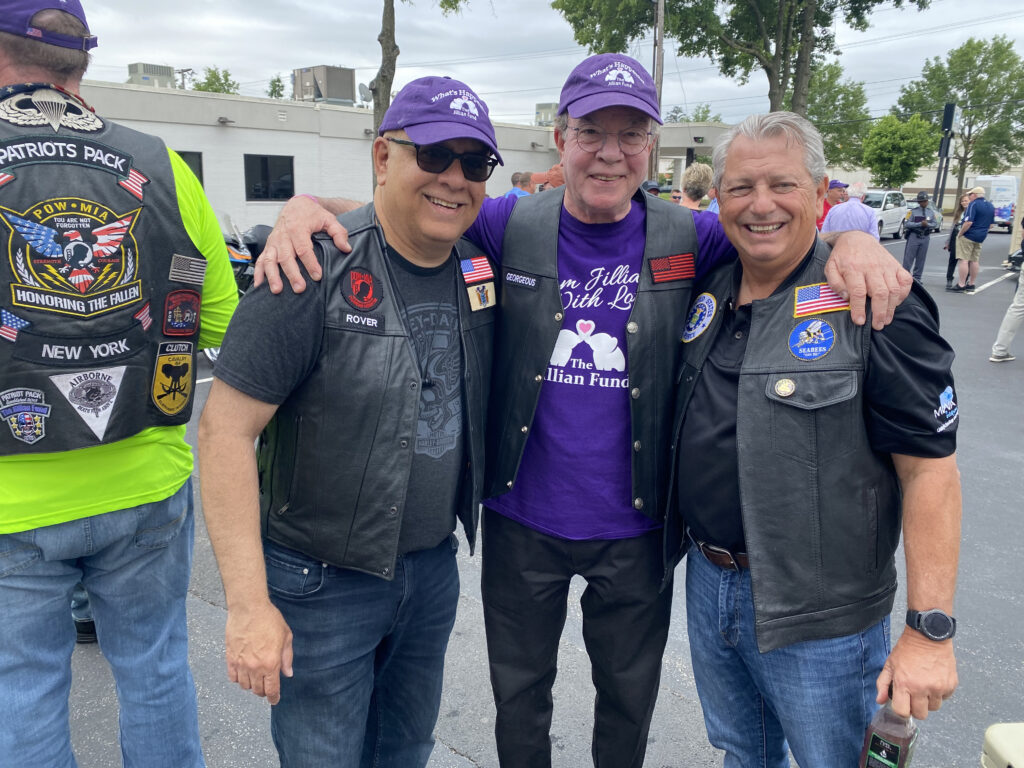 The SOE staff is there to give us a warm Virginia welcome and show us where to park in formation. We are soon expecting a few squad cars from local Police. A corvette from the State Police a fire truck or two and their attending staff as well as 4 motorcycle officers. Then we will be met by the Police Chief, State Police command staff, the Fire chief, and a politician or two for good measure. This is not all FOR the Pack but as a result OF the Pack. Sam Stone has built upon our mission and created his own Day in May

May to show appreciate for those who serve his local area.

There will be good conversation and fellowship, wonderful learning experiences and… the acerbic wit (look it up Bert! I am certain many parts of Iowa speak in polysyllabic prose) of Sam’s amazing father. Later this evening he will reveal his amazing heart and love for his family.

Joining the Pack is the Czar of Sharp and his court as well as Father of Jillian him self, George Gorman. Even Rover showed up for his close up… we had a Mr. DeMille protege doing space-invader close ups and Rover wouldn’t miss such an opportunity to show off to his daughter. 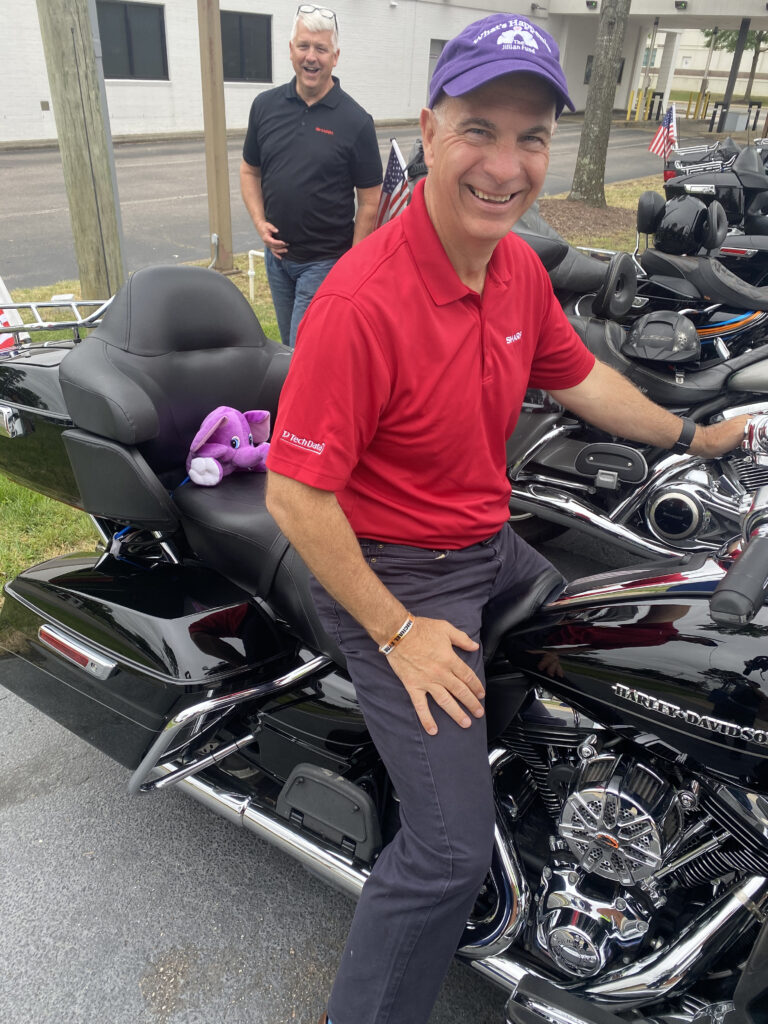 The Day in May is very special as SOE and the Stone family always finds a new local charity to support. this writer is quick to point out the new charities are in addition to the past charities, not a replacement. There was a quick gathering in the parking lot, some announcements of the new charity, introductions of those present, a rousing Pledge of Allegiance to our Flag and a pre-meal blessing. Let’s eat!!! 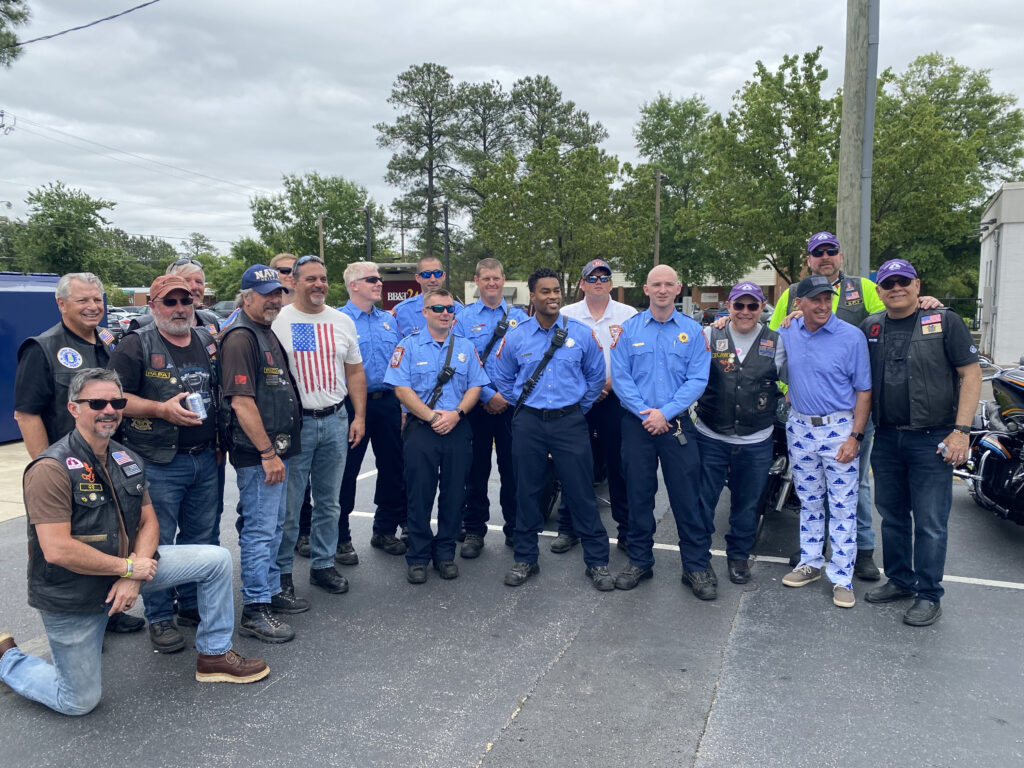 Time for the Pack to return to our hotel and get some rest while preparing for the return home that begins Wednesday morning. There packing as we have been out of the saddle bags for three nights. There are the long (not goodbyes) see-ya-laters for those not making the round trip as well as preparation for the evening. The Pack and a few others are invited to the Sam Stone residence… picturesque Almosta-Ranch really. Thee will be a few celebrations and remembrances AND presentations. One this year’s mission for the Pack is to honor the sudden and tragic passing of 21 year old Mathew Stone in 2020.

The Pack needs to leave the parking lot in formation and onto the busy Broad Street. No sweat!!! 4 motorcycle officers buzz out before the Pack to bring traffic to a halt so we can proceed safely. We must tell you this never loses its cool factor!! Off we roll to our hotel for the afternoon.

Sam Stone has private shuttle vans collecting us later in the evening. Time for the Pack to pack.

Shortly after 5:00pm the Pack is gathered in the lobby. We’re waiting for our ride and watching the Judge count money. Some of the Pack and Pack adjacent personnel have sold more Clover Harley raffle tickets for which the Judge is the official keeper. Counting the money is not a matter of identifying each bill and it’s denomination. It is much more for our jurist with a retentive sphincter. He is pressing the bills. He is arranging the bills in order by denomination. He is arranging all bills in presidential face-up and up-right order. Then after counting he is counting again. Then, in an effort to replay this situation, several Pack members decide to purchase a ticket or eight with bills in an uncontrolled order. Papa has a collection of bills from A Day in May that are unruly and toss them onto the pile. The sphincter is contracting and again we proceed with the rearranging reorganizing and recounting. It is a marvelous process which we imagine is appreciated fully by the Mrs Judge of 50 years.

Our private coach has arrived. Off we travel to Stone Hedge Ranch. As we approach we notice we are several miles into the Virginia farm fields. We roll down a winding road lined with rolling fields and two stately manors separated by a beautiful lake. We pull into the first manor to find it rather unoccupied. Looking out over the lake (tonight we will call this Stone Patriot Lake) we see someone waving from the other manor. Seems we are at the home of Sam’s sister and across the lake is our destination. Our coach turns around and we proceed the final 200. yards to Stone Hedge. 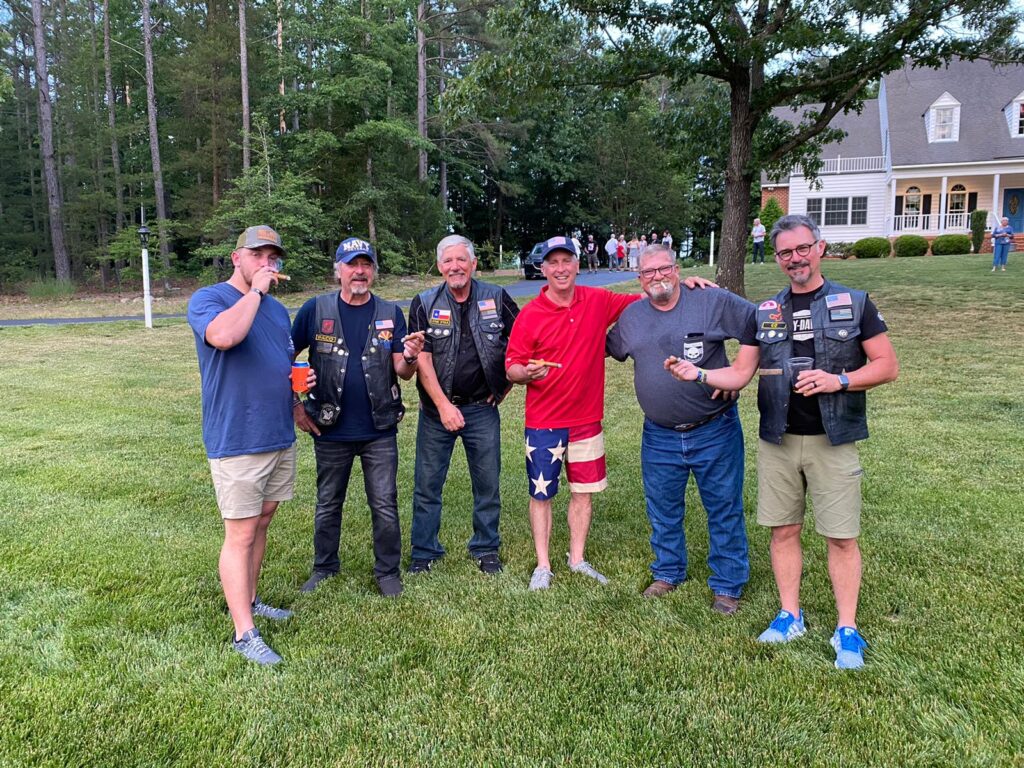 Wow…. the immediate Stone family, the Sharp corporate brass as well as Larry and George, are all waiting for the Pack so we can have a wonderfully relaxing evening. This evening is to celebrate the safe completion of another Patriots Pack ride, commune with the Stone family and spend a few moments remembering the life and legacy of Mathew Stone. We’re joined by his brother Carson and sister Libby.

The cocktails are flowing and the conversation is spirited. Matt’s two grandfathers and a grandmother are in attendance as well. It took a while but the shy and reserved Pawpaw Stone finally warmed up and joined the conversation….

Some time after 6:30 the caterers signaled they were ready to carve the huge New York

Strip roast, serve veggie pasta, uncover the pulled port and top it all off with creamy coleslaw. Perhaps even Paco will fill up on protein and pasta this evening. Apparently the Sharp brass doesn’t have time to eat because the two of them saw the carving station at least three times! This was a spectacular meal with even better company.

After all had had their fill the crowd made it’s way back to the patio area with the fire pit as the centerpiece. This was a favorite spot for Matt. Around the corner is the perfect vantage point for sunsets over Stone Patriot Lake. That name is growing on us.

Sam and his wife want to say a few words of appreciation for the those gathered. In attendance are 4 parents or parent sets who have collectively lost 5 young adults to cancer or tragedy. It is a brotherhood no one wants to join but if they do they truly lean on each other.

George has a moment to honor the Stone family with a memento from the Jillian fund.

The counting Judge takes the stand to present the Stone family with a brand new scholarship in Mathew Stone’s honor. For ever Matt’s legacy will be an annual scholarship. The BTA channel keeps on delivering.

Next up Papa presents a beautiful plaque, from the Pack, with Matt’s photo etched in metal alone with one of Matt’s favorite sayings. Finally Paco spends a moment explaining the 13 fold flag presents one to the Stone family in Matt’s honor. Apparently Matt all was had old glory displayed in the back of his truck. This tribute from the Pack was more poignant that we knew.

In true Pack fashion this ceremony was capped off an emotional rendition of Ave Maria as preformed by Papa. 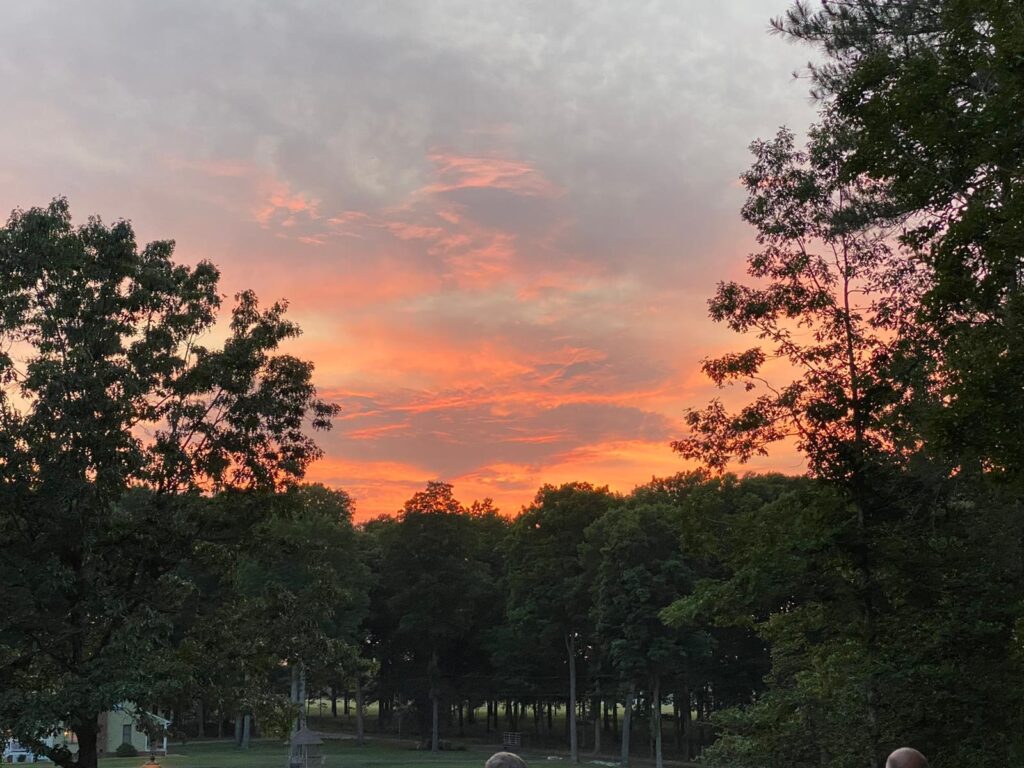 Later Papa was approached by the every shy Pawpaw Stone. Seems he wished there was a second verse… in english so he could understand the words! With tears in his eyes he hugged Papa in appreciation. It was time to watch the day turn into night as the sunlight gave way to the May super moon. Between super moons and butterflies, and amazing human interactions, we were obviously in Matt’s presence all evening.

The evening was capped off with cigars and lemonchello… Ave Mathew indeed!