Red apple and big melon; Limited fruit supply when on the road…

Kickstands up / wheels rolling at 7:00 according to Papa. Certainly not to beat Santa Rosa traffic?!?!?! We have the prospect of some less than fortunate weather so we need to thread the needle. Leave before it hits Santa Rosa and ride at a pace so as to arrive in Oklahoma City AFTER their showers. Those on two wheels have no issues making the scheduled departure times. The more senior members, Rover and the Judge, find is more difficult… “come on maaaaannn… “. You’re riding in rolling nap wagon!! Alas with literal seconds to spare Judge makes his presence felt and the Pack begins to mount up… only to dismount. Looking over at the Mars’ Rover Rover Papa sees the engine hood up and three heads looking in intently. We talked about “shit” yesterday? Seems the Mars’ Rover Rover is down a fuse and the truck stop across the way was not helpful. Quick decision, since the fuse is for some inside electrical and does not effect forward movement, we move forward. Fuel at another truck stop on Santa Rose before we head east on interstate 40. The bikes fuel up. Papa gives a Glympse connection to the Mars’ Rover Rover so the passengers can track us real-time via gps. This allows the riders to get on the road and the Mars’ Rover Rover passengers can dawdle with their fuse issue. We are certain that if the riders have need for our “support” vehicle it will not be far behind. 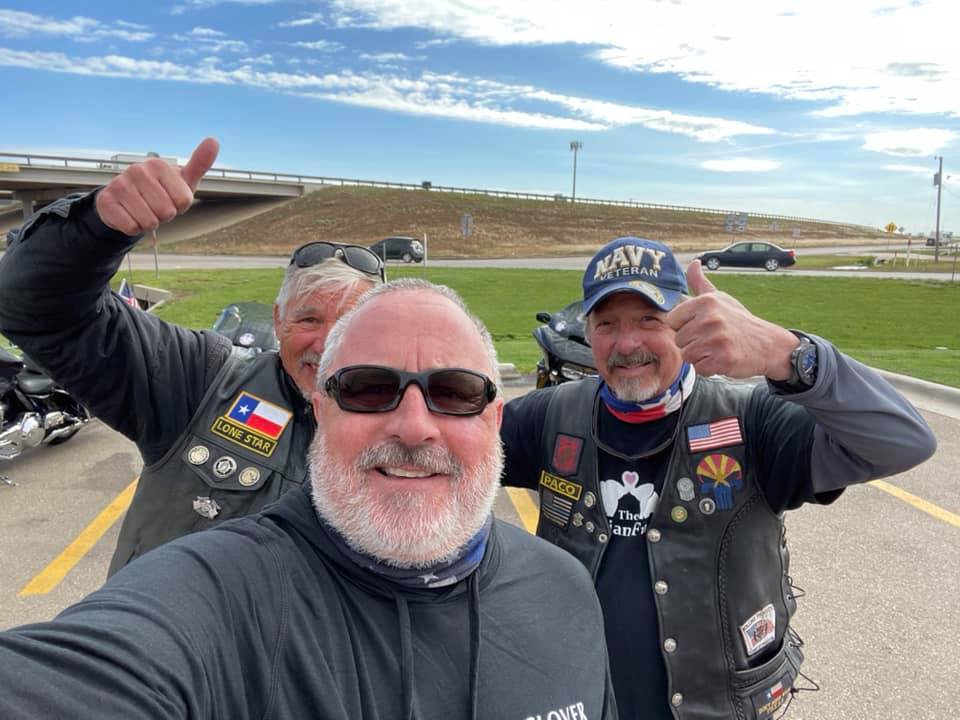 Engines roar and the bikes proceed up the I40 ramp, set the speed at 79 and roll east in partial sunshine and 53 degrees. Perfect riding as long as you have proper gear. Our first stop should be our fuel stop 140ish miles down the road and thus…. in Texas and the Central Time zone. It was about two hours of perfect riding. Light winds, cool temps, light traffic, and the bikes rolling in perfect lane-change-harmony. Not wanting to repeat the internal drama of the prior evening’s fuel stop, Papa rolls off I40 in Texas at mile marker 36. As the bikes fuel and the riders take hydrate, Papa connected with the Mars’ Rover Rover to find they have exited at mile marker 35. Still searching for the elusive fuse. God forbid the laptops cannot be charged while the elders are napping. Thus, without our support vehicle the Pack riders are left to fend for themselves with snacks and hydration. This is a rather quick stop. After admiring a dog find grass for the first time in weeks, the riders start their engines and begin to merge back onto I40… which is a treat in the Texas panhandle with service roads doing double duty as on ramps.

Next stop will be a rule and lunch stop about another 140 miles ahead. Thus leaving about another 150 to our hotel and visit. Again the Pack rolled with perfect weather. The temps have climbed so no need for jackets. Just a long sleeve and our cuts. The winds have picked up just a bit but there was nothing uncomfortable about this next two hours of riding. In true country music fashion we have reached Amarillo by morning. A nod to the Cadillac structure just west of the city. We roll through Amarillo construction quite easily having missed the morning rush. Soon we have exited the panhandle of Texas and are rolling in Oklahoma.

Since the speeds are up due to interstate highway travel, the fuel consumption is less efficient so Papa is looking for an exit with some fast food at about 130 miles out. At mile marker 60 ish in Oklahoma Papa spots fuel and the Golden Arches. It is always safe and given the gastric distress of the prior day, it seemed prudent to stay safe. A quick call to the Mars’ Rover Rover to make sure they knew our 20 (trucker speak for location). The riders fueled up and rolled down the street to the Arches and parked for a little rest and lunch in the shade. After the Mars’ Rover Rover lurked about town looking for the riders at the fuel stops it was decided to head to the Arches and alas we were reunited with our support vehicle. Rover’s daughter, if you’re reading this, please tell Rover that stacking two Oreos does not a double stuff make. Even Papa’s grandchildren know that it’s not an Oreo unless it is double stuffed!

A quick conversation that went like: “we have two hours of riding before our Oklahoma City hotel. Let’s ride in formation since the Mars’ Rover Rover seems to handle 79 easily.” All agreed. As the riders are finishing their nutritional Arches fare it is apparent the Mars’ Rover Rover is in a hurry and it departs. Apparently they intend to support the Pack from the front. The riders mount up and gather to enter onto I40 east for the last leg of the day. This should get us into our hotel at 3:00pm and thus at our scheduled visit by 3:30..ish.

The Pack rolls up to speed. Surely the Mars’ Rover Rover is holding down speed so as to allow the riders to catch up. They are seemingly intelligent people and with a little physics training and simple speed/telemetry modeling they know that rolling at 80, 10 minutes ahead of the bikes would disallow any chance of the riders catching them. Surely they know this.

About an hour out Papa sees Paco with a blinker on. Knowing the rider distress of the prior day Papa makes a quick exit. Turns out is I was an inadvertent blinker and the stop was aborted… though a quick Gatorade would have been welcomed… Back up to speed the Pack rolled. About 50 minutes later the riders roll into the western outskirts of Oklahoma City. We will likely arrive at our hotel at exactly 3:00. We assume the Mars’ Rover Rover is somewhere close. We enter OKC and approach our exit. The hotel is in our sights. On the off ramp there is a large FedEx panel truck waiting for the vehicle in front of him/her to make the right turn. Soon that vehicle makes its right turn… low and behold it is the Mars’s Rover Rover. Just a mile or two in front the whole way. Finally in reverse formation the full Pack rolls into the hotel parking. Papa lets the rider know we have wheels rolling in 25 minutes. We quickly check in and prepare for our visit to Xcel Office.

At 3:25 most are gathered and ready to roll the 1400 yards to our host’s facility. Where’s Rover? Klinger is in charge of rounding up Rover and the bikers get ready and mount up. Papa swings around the back to find the Rover just entering the Mars’ Rover Rover. Papa gave the horn and rolled back around to the riders. We waited a bit and soon the Mars’ Rover Rover got into formation (for the first time today) and the Pack rolled north o1400 yards n Meridian.

As the Pack rolled into the parking areas it was apparent Xcel Office had rolled out the red carpet. We were met by Jamie and Mike (yes another Mike) and the rest of their smiling welcoming team. What a treat!!! Their official photographer was rolling with photos and videos of our arrival and parking. We were met not only with smiling faces but tents for shade, a desert rack, Gatorade, beer, and a hotdog station. What a wonderful team!!! After some time the Pack was presented with a fantastic donation to the Jillian fund. Another photo opportunity!!!! Some of the Xcel team decided to join the Pack back at the hotel for our evening “camp fire” at the Mars’ Rover Rover. We would order more Sharp Pizza and enjoy bonding time with our new brethren. 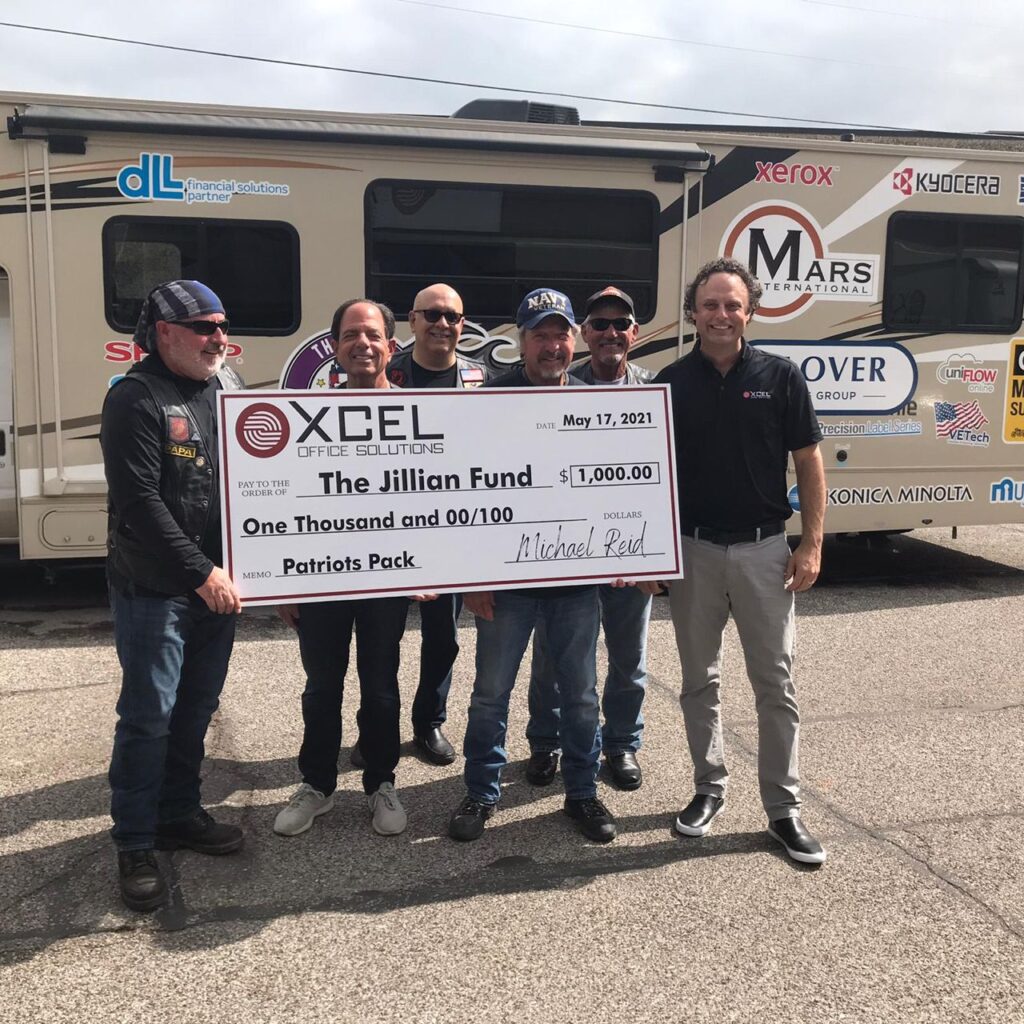 Lone Star Junior (junior my a$$!! He is a mountain of a man) and two of his junior junior’s showed up to bond with the Pack. Brother Kory (Mikey’s Dad) dropped by for a chat. Kory brought along Mrs Kory and a junior junior… who will enlist soon and make his family (and the Pack) proud..

It was a great evening. Early mornings and long riding days cause the camp fires to break up early. The Pack needs to pace themselves as we are only 1100 miles into almost 6000 miles round trip.

The Jillian Ride Day 1 On The Road in Pie Town NM!