The DATA Group has acquired multiple new Xerox digital presses in a C$6.7 million deal that is believed to be one of the single largest high-production digital upgrades by a Canadian graphic communications company in 20151. The DATA Group now uses Xerox presses for all its digital cut-sheet printing at all nine of its production facilities in Canada and Chicago, supported by a standardized workflow built around Xerox FreeFlow® Core workflow automation software. 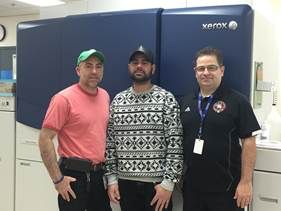 “The biggest thing we’re getting from this deal is improved productivity, primarily from having a single, consistent workflow,” said Alan Roberts, senior vice president, Operations, the DATA Group. “We’re also getting more capacity, and we’re getting an expanded color gamut, to closely match brand colors that we couldn’t match before with xerography.”

The source of the expanded color gamut: the optional fifth toner station on the Xerox iGen® 5 Presses the DATA Group is acquiring, replacing two HP Indigo presses. The fifth toner station enables either orange, green or blue to complement CMYK, expanding the press’s achievable color gamut to more accurately match up to 90 percent of the Pantone Plus Coated library.

The DATA Group is a top-five Canadian printer and communications management company that provides marketing and document management solutions in electronic and print media to help its customers grow revenue, reduce costs, simplify processes and mitigate risk. Based in Brampton, Ontario, the firm has about 1,400 employees and generates about C$313 in annual revenues. Website: www.datagroup.ca/