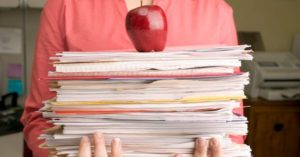 How One School Does More with Less
The Racine Unified School District is the fifth-largest school district in Wisconsin with 31 schools and an enrollment of 19,455 students. Until recently, the district had no centralized control or management of its printers and no standardized printer types. “There was no way to determine how much the district was spending on printers and supplies or even how many machines we owned,” says Shannon Powell, Special Projects Manager with the Racine Unified School District.

Several years ago, the district took an inventory of its printer network and found it had no idea how many print devices it owned and had no system for centralized management or output control. In fact, many schools had purchased and installed machines without the IS team’s knowledge. “One classroom had four printers; one in use, and three in the closet, in case the others broke down,” says Powell.