It may seem distant, but let’s flash back in time quickly to early March.

In Haiti, our new building was complete, the plastic washing line equipment had arrived, and an installation team from Germany, Canada, and the US had their airline tickets confirmed. We were in the final critical phase of delivering on our $2 million investment to expand our ocean-bound plastic supply chain here in this island nation, but like nearly everything in early 2020, our best laid plans were under threat by a global pandemic.

Air travel halted, businesses shifted to remote work models, and countries closed their borders to contain the spread of the virus.

It was a disappointing blow to the global team who had already faced multiple obstacles on this four-year journey. Relocating a portion of our supply chain and building a new business model in the poorest country in the Western Hemisphere comes with a unique set of challenges. It is a fact to which our team has grown accustomed. Since 2016, HP, together with our partners, Lavergne, First Mile, and Work, have been innovating new ways of working under some of the harshest conditions in the world.

But the rewards are substantial. These efforts have already diverted more than 1.7 million pounds of plastic materials—that’s more than 60 million bottles—from reaching the ocean. The plastic is combined with other plastics, including recovered materials from HP Planet Partners (the #1 printer supplies recycling program1) and is repurposed into HP products and printing supplies, including the world’s first displays, notebooks, mobile workstations, enterprise Chromebooks, and consumer notebooks containing ocean-bound plastic.

By adding a plastics washing line to our supply chain in Haiti, we’re expecting to create an additional 1,000 new income opportunities, while enabling Haiti to expand its recycling capabilities and compete better on the international plastics market.

With so much at stake, we, together with our partners, weren’t about to let COVID-19 halt our progress in driving environmental, social, and economic impact for the people of Haiti. 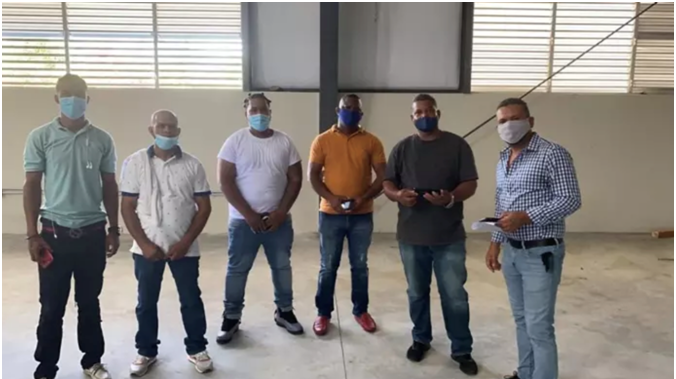 As it became increasingly apparent that temporary travel and social distancing restrictions would remain in effect for the foreseeable future, HP, Lavergne, and STF Group began devising plan B—leveraging technology and local labor resources, combined with experts from HP and our partners in Germany, Canada, and the US, to create a virtual installation team.

Because no one in Haiti had direct experience installing the German-made washing line equipment, we relied on local trade associations to help source workers from Haiti and neighboring Dominican Republic that had experience with other heavy equipment installations, as well as skilled high-voltage electrical and plumbing labor. Extra COVID-19 safety procedures were implemented to protect the onsite workers, including strict masking and handwashing protocols, as well as limiting outside exposure beyond the team.

One of the first steps was installing high-resolution cameras throughout the building so that the virtual team had a clear line of sight to the full build process, including the ability to zoom in from different angles to get detailed views of the components. Leveraging detailed 3D drawings and connecting via Zoom conferencing, the virtual team met daily with the mechanical build team in Haiti as they assembled the washing line, piece by piece.

The mechanical process took about 5 weeks, followed by daily meetings with the electrical and plumbing team as they prepared the equipment for operation. The virtual team, including Donald Vigneault and Edouard Carrie from Lavergne, Dirk Leiber from STF Group, and Dean Miller and myself from HP, were thrilled and breathed a tremendous sigh of relief as the Haiti-based team powered up the washing line equipment for the first time. We felt that we had created a small miracle against all odds.

Amazingly, the complete build of the washing line to the first production run took about 10 weeks—which is only three weeks longer than the original installation estimate. That includes a stop on the island from Tropical Storm Laura (later Hurricane Laura), which destroyed one of the bridges on the road to our factory. Symbolically fitting, the team found an alternative route to reach the building and continue their work despite the extreme weather conditions.