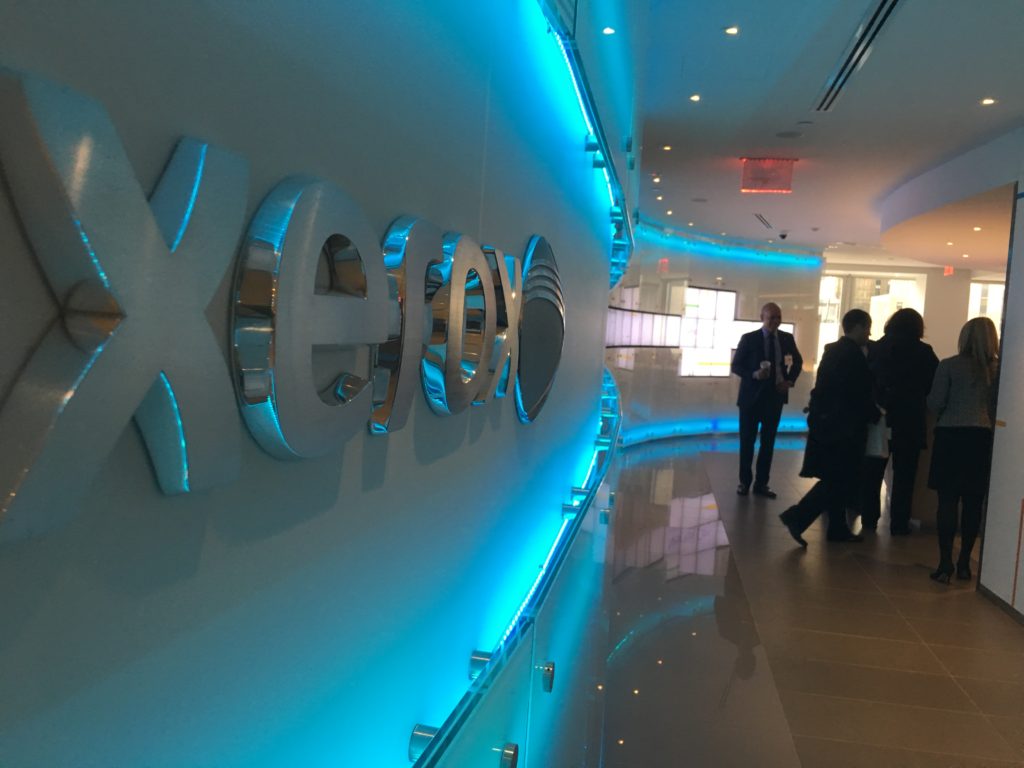 On March 29, Xerox held what was billed as their biggest product launch in their history. From NYC, CEO Jeff Jacobson kicked off the global announcement. Jeff opened the day telling listeners how excited he and Xerox are to be able to say this is the biggest launch in the 100 year history of the company. That’s quite a statement. Jeff went on to tell us how Xerox will transform the traditional MFP into “a smart, workplace assistant.”

The conversation shifted to technology and how Xerox is turning to PARC, one of the world’s most renown technology centers, to help lead them into the future. Jeff said, “PARC is now once again 100% dedicated to serving the needs of the new Xerox customers and this industry.” The key to that statement is “once again,” alluding to the fact that PARC had previously developed all kinds of technology in areas that have nothing to do with what Xerox does. It was a nice revenue stream, but at times PARC should have done more in my opinion, to push Xerox’s own innovation. Shifting that brainpower to bring usable technology to Xerox’s portfolio is a great move. 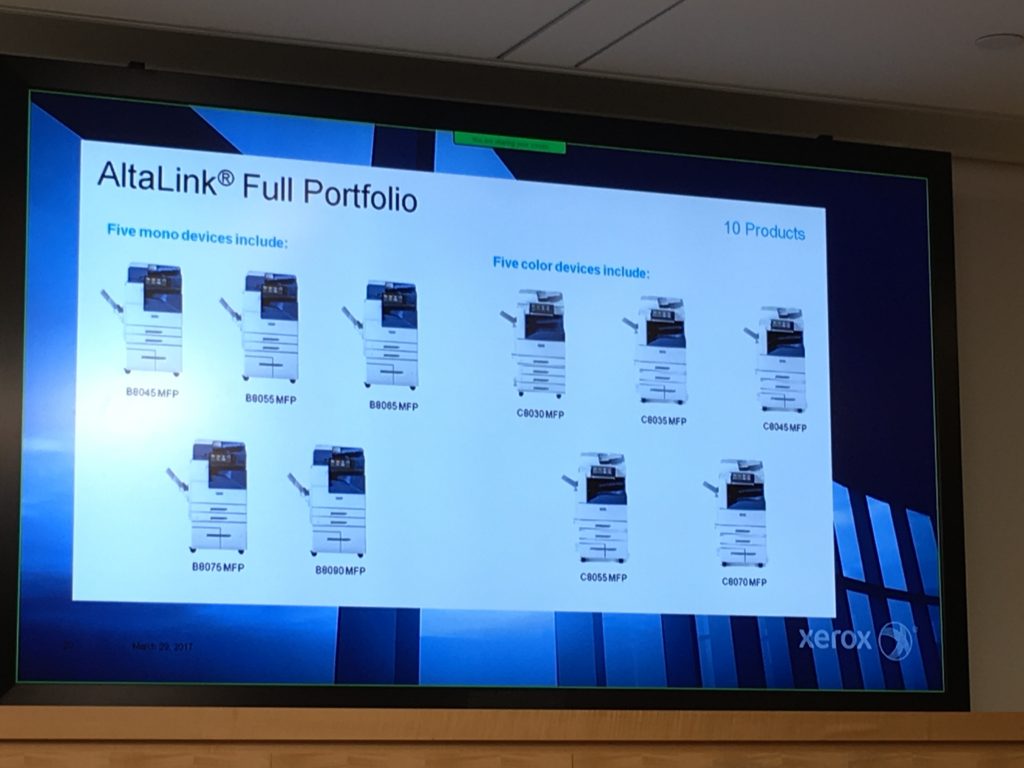 Jeff told us that 60% of Xerox’s revenues come from mature markets, which he says is $47 billion of the $85 billion overall market. Xerox is going to “pivot” towards that $38B market of growth areas while maintaining their leadership role in the mature (flat and declining) markets. It’s their goal to generate 50% of revenue from these growth markets within the next few years.

The four areas of focus are:

Next, Xerox announced 29 new ConnectKey enabled products under two new product family names. Under the VersaLink brand, Xerox is coming out with 19 MFPs and including 12 A4 devices. Then, there’s AltaLink, which had 10 new A3 MFPs. Going forward, the WorkCentre brand will still exist, but I believe most products will now fall into these two categories. The products themselves feature a new touch screen that’s very clean, simple and logically laid out, emulating a smartphone user experience. It’s safe to assume that the new MFPs are mechanically just a little bit better than the ones they are replacing. The real change is that user interface where Xerox wants to change the customer experience. 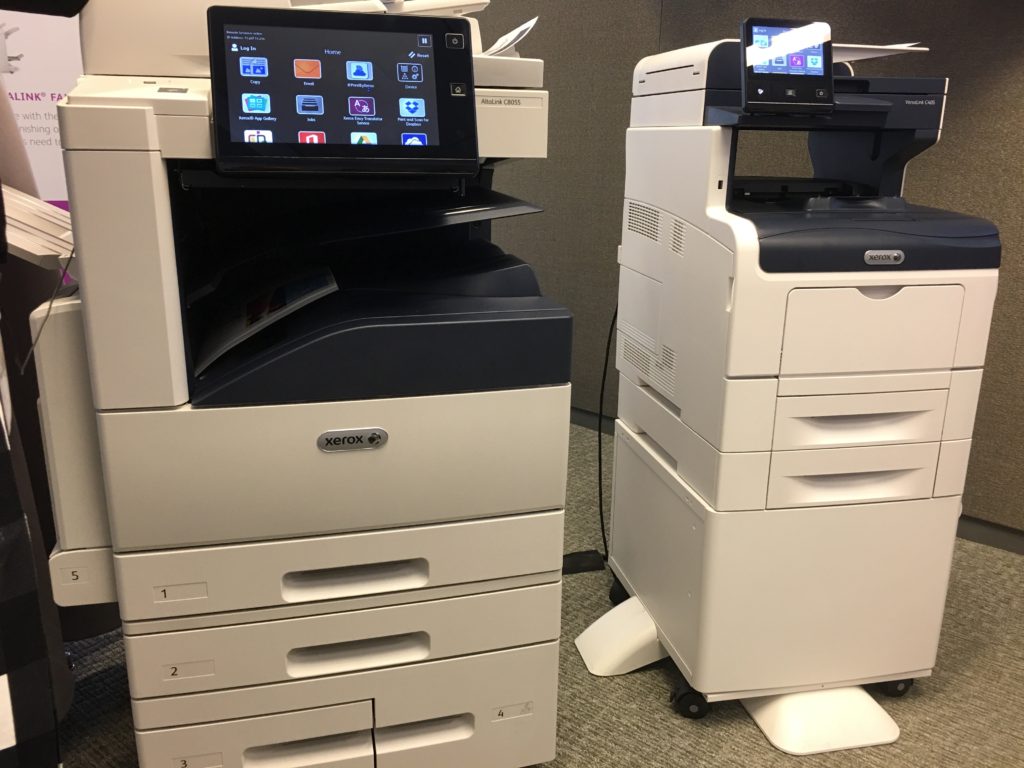 One minor quip is that Xerox has been pushing user interface continuity throughout their portfolio since I can remember. This new screen is completely different. It’s much nicer and easier to use, but they could due with a Classic View mode to satisfy any customers that actually bought into the continuity messaging they’ve been preaching in the past.

The channel panel discussion that followed the announcements was enlightening and showed me an entire new level that Xerox is moving towards. Three of Xerox’s partners told us some pretty incredible stories of success for their companies, all from the apps that they’ve incorporated into their sales processes. These are not bundled apps developed by Xerox, they built them themselves. In the case of Xerox dealer Southern Solutions, Josh Justice told us about how they’ve built this into a half a million dollar annual revenue stream from nothing in only a couple of years and it now accounts for 10% of their revenue. Not only does he use these apps to solve customer problems, he then resells them to the Xerox channel partner community. It’s the fastest growing part of his company. And that doesn’t account for deals he’s won by being able to customize apps around the customer’s needs. 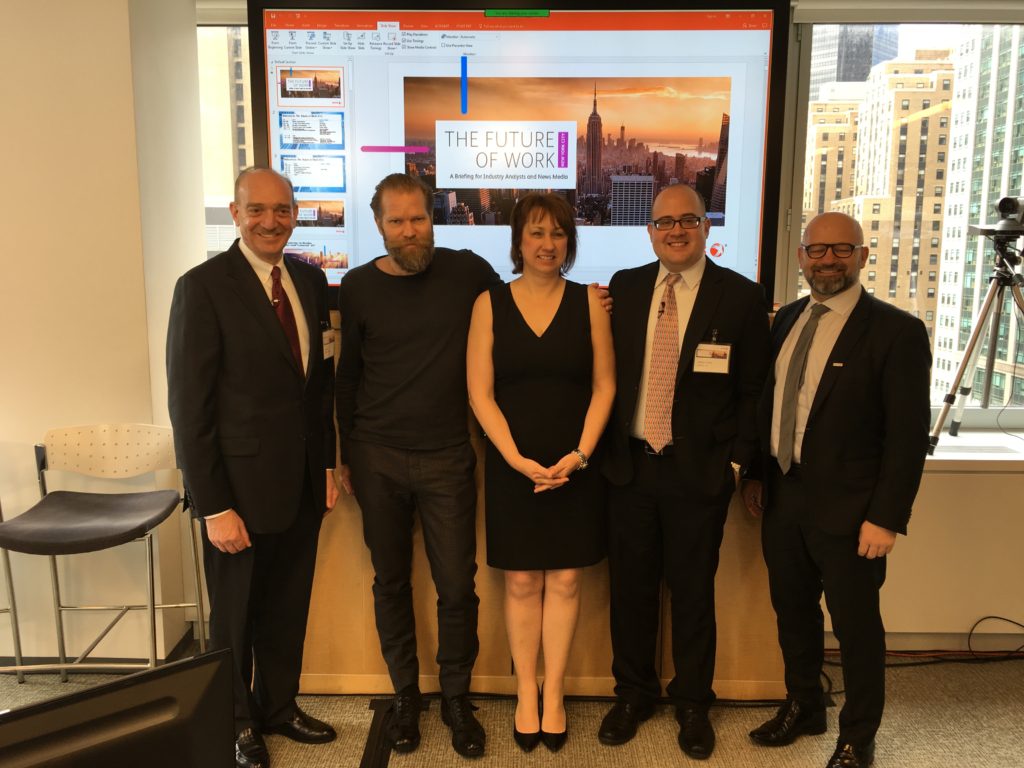 The Harley Davidson driving Swedish viking Stefan Nilsson of Foxway told us how he’s used apps to build his business into a $100+ million operation. They’re a key to what he’s doing in Europe and he’s expanding internationally. I look forward to his next visit to Rochester and we can hopefully log some miles riding in the Finger Lakes!

Donna Davis of Vision-e showed us an app they built that adds these new Xerox copiers into the Amazon Alexa ecosystem. Walk up to the machine and tell it to color copy 50 pages, two-sided and stapled and watch it go. I saw it work. Those of you that have an Alexa get how powerful this is. Those of you that don’t, can’t appreciate it properly until you try it. While it may look like a gimmick or just cool “thing,” it’s much more. It’s a true time-saver around the house, adding things to grocery lists without interrupting what you’re doing, playing music, giving you the news and weather, looking things up for your, etc.

Take that mentality to the office and ask yourself how much easier would it be for customers to walk up to the MFP, drop the documents in the feeder and say “email these to Andy” and it just does it. “File these invoices” and they wind up in the system. There’s some real opportunity here. Or authenticate with voice instead of a card you need to swipe every time. And guess what. Xerox didn’t think of it. Xerox enabled it. This came from a dealer’s development company.

Not only has Xerox created a platform that enables their channel partners to customize the products while building net new recurring revenue streams, they’ve gone further by allowing customers to develop their own apps. And this is what could put the MFP at another level.

MFP OEMs have been building copiers and printers since day one. That’s what these devices have always been intended to do and that’s what you see when you look at them. All of their focus and energy is spent thinking how can they make it a better copier or scanner or fax machine. You know what started like that? Your iPhone. Before Apple opened up development, it was just a phone and a media player. It did what they intended it to do.

On any given day, I’m willing to bet most of you use your phone very little as a phone. It’s everything and you can’t live without it. Apple built a platform and people looked at that phone and thought of hundreds of thousands of things to do with it. That’s the potential Xerox is unleashing with this strategy. Giving customers the ability to look at these devices and come up with new uses for them is brilliant. Xerox only has so many engineers. But they have thousands of channel partners who have tens of thousands of customers and now they all have the ability to transform what used to be a dumb copier into something truly unique and possibly life-changing. 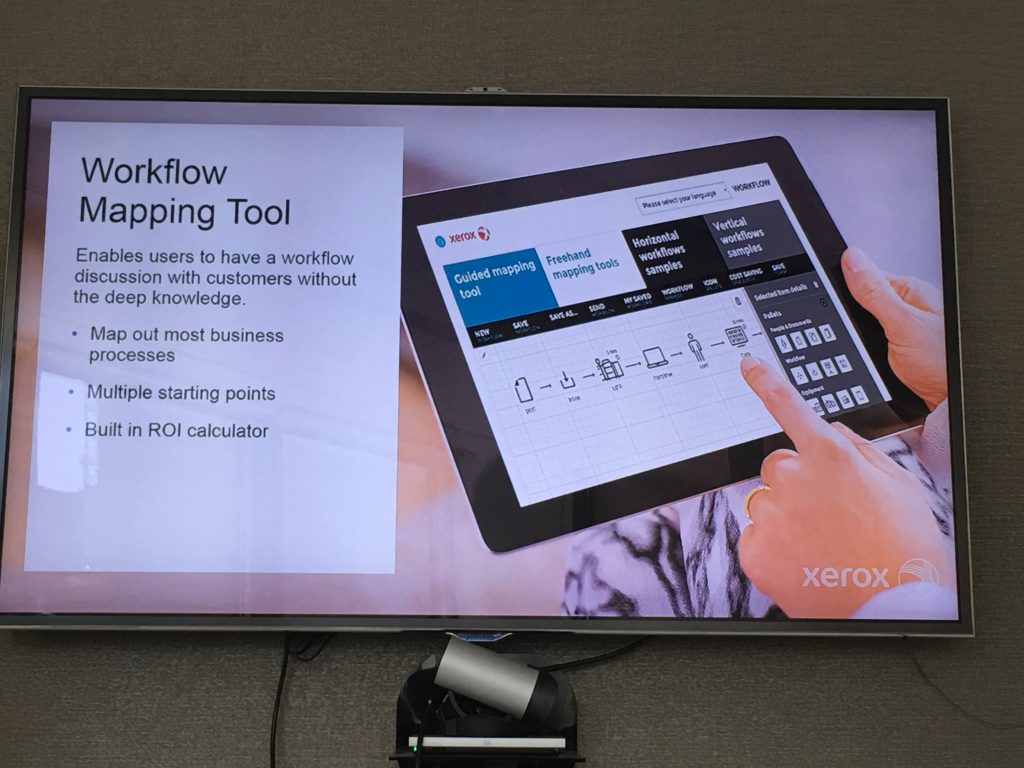 I don’t want to hear “yeah, but…” If I told you this was about to happen with mobile phones prior to it happening you wouldn’t have believed me (that’s why I didn’t tell anyone it was about to happen). Very few Xerox dealers are doing this at the moment and even fewer customers have been developing so far, but this is just the beginning phase. Will it be as big as the iPhone? Probably not, but it’s a major opportunity for Xerox and especially for their partners. If Josh keeps this pace up, he’s going to have $1M+ per year in recurring revenues on something that costs him very little to maintain and something he doesn’t have to sell over and over again.

Just look at your iPhone. How many pages of apps do you have and how many were developed by the company that made that phone? Today’s MFPs have beautiful large displays, a ton of computing horsepower, USB ports, browsers, internet access and some have speakers. I have no doubt somewhere out there, there’re a few nerdy Xerox customers who will start playing around with these devices to see what else they can make them do. And that’s how the iPhone became what it is today. Innovation from customers. Xerox wants to do this in the office. 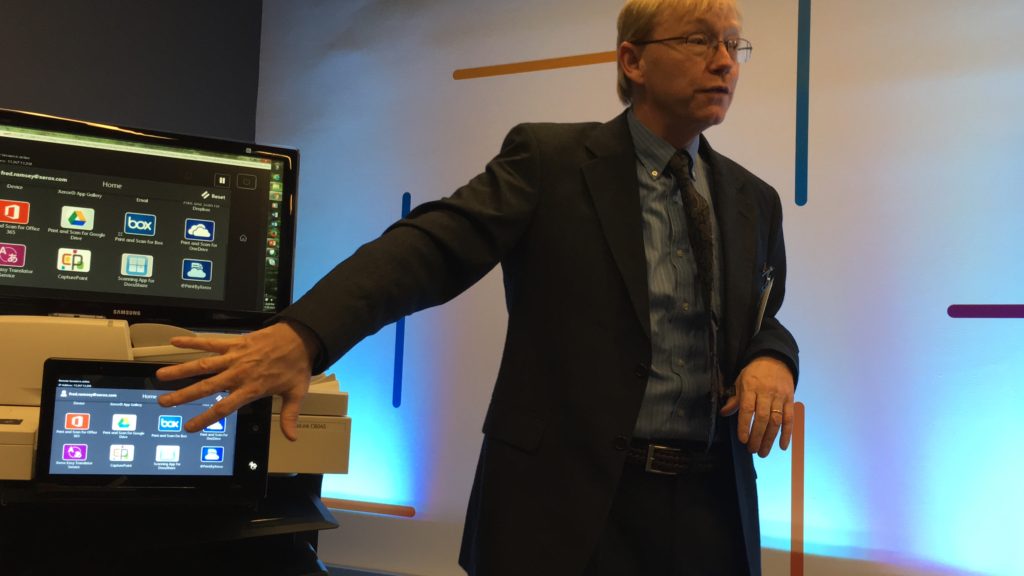 All of this starts with ConnectKey, the glue that pulls the hardware into the IoT and allows for true customization. Xerox has made the app development extremely easy, both through templates and by giving more advanced developers the ability to build more complex apps. In the past, Xerox was like all OEMs, manufacturing the device and saying “here it is, here’s what it does, here’s how you sell it.” Now they’re building the device and turning it around saying “here it is, what can you do with it?” 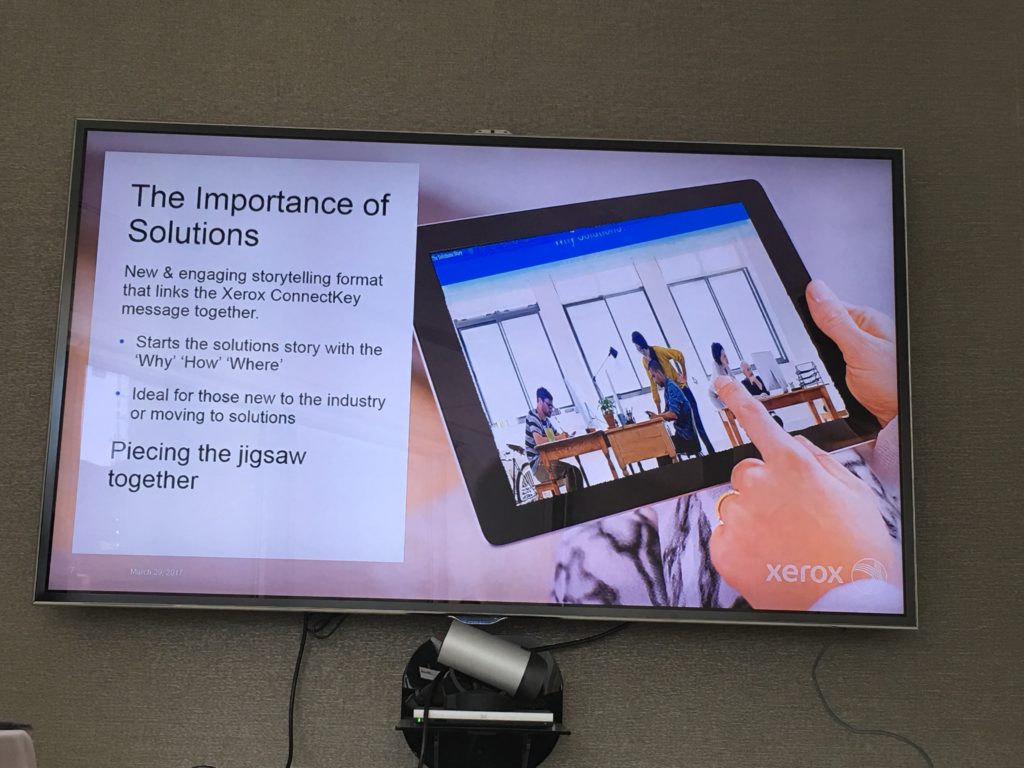 To me, the biggest news of the day wasn’t really the 29 new machines. In fact, they didn’t even have most of them on display, just a few family members featuring the new tablet-like screens. This was more about the potential Xerox has with the apps and the improved benefits found with bringing ConnectKey top to bottom throughout the portfolio. Elizabeth Fox told us this will be a big plus for their MPS efforts going forward. 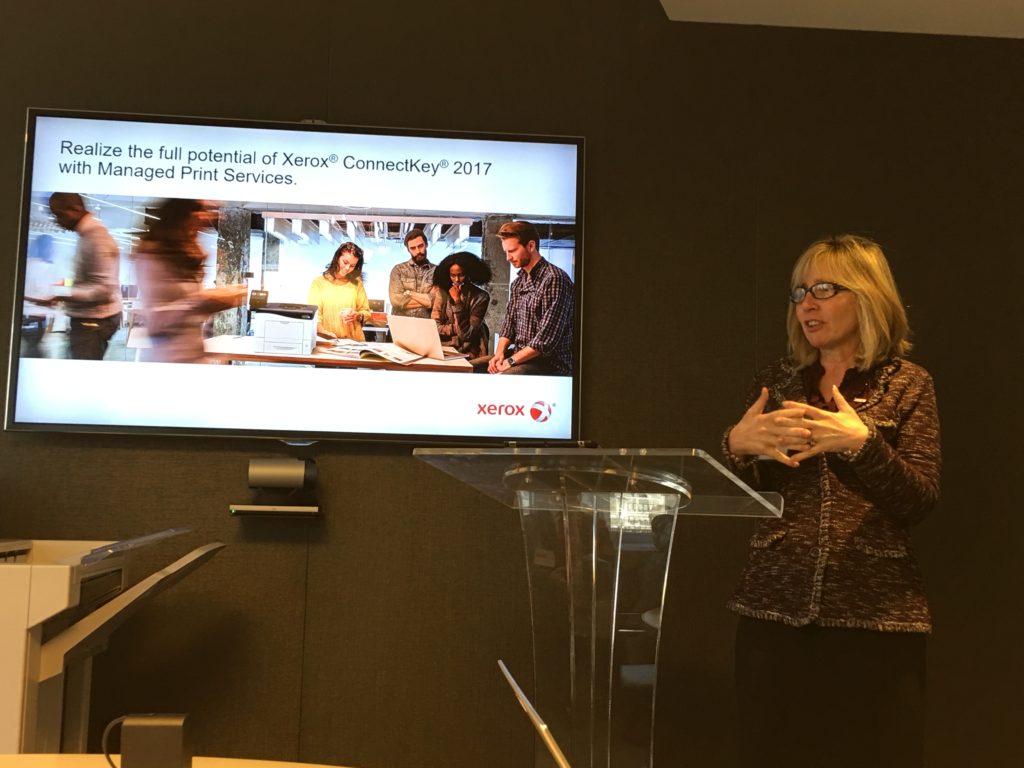 The enthusiasm at this meeting was noticeable. I’ve known some of these Xerox people for over 20 years in my various roles and it’s been a long time since I’ve seen them like this. They’re fired up. It helps to have someone at the top that is clearly so comfortable getting out in front of people with solid messaging and more importantly, a focused plan on what Xerox is going to do to fix the problems and turn the ship around.

A great day for Xerox.