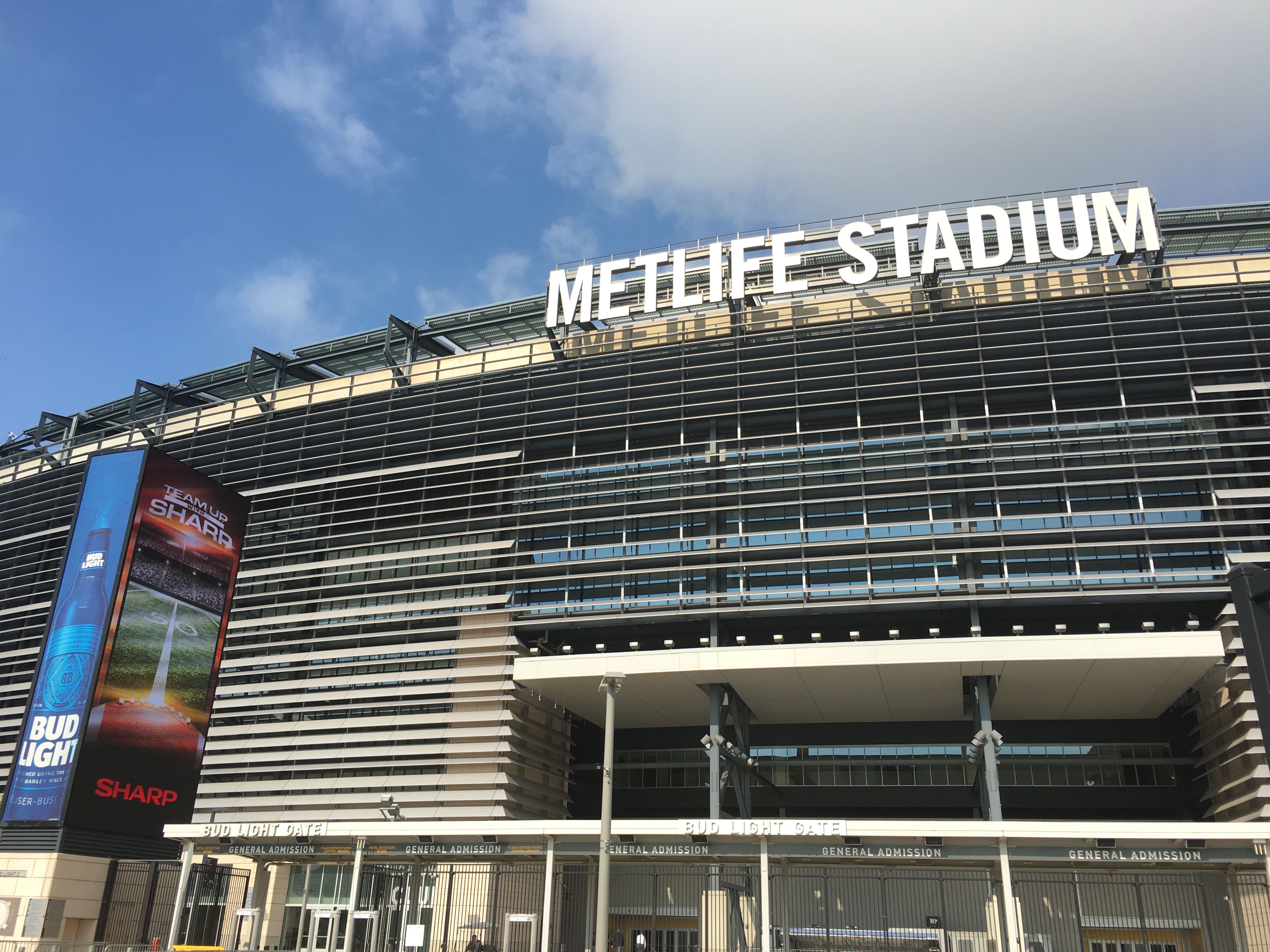 By Andy Slawetsky – EXCLUSIVE  – On July 18, Sharp held the last of a four city tour at The Meadowlands in NJ, home to the Giants and Jets. While, Sharp has been pretty quiet for a while, they had a lot to talk about.

The setting for this meeting showcased Sharp’s new relationship with MetLife Stadium, who just bought over 2,400 Sharp displays. Sharp will be all over MetLife Stadium this year, including luxury seating and even a lounge carrying the Sharp name.

The day started with SVP Laura Blackmer opening up the event, showing us the agenda and some background on what we would be seeing, who would speak, etc. About 100 people were in attendance and I’m told Sharp had similar numbers at the other three venues. During the introductions, one group stood out as several FOXCONN executives were welcomed to the meeting, including Mark Chien, who heads one of Foxconn’s major technology groups and reports directly to FOXCONN founder and chairman Tony Gou. 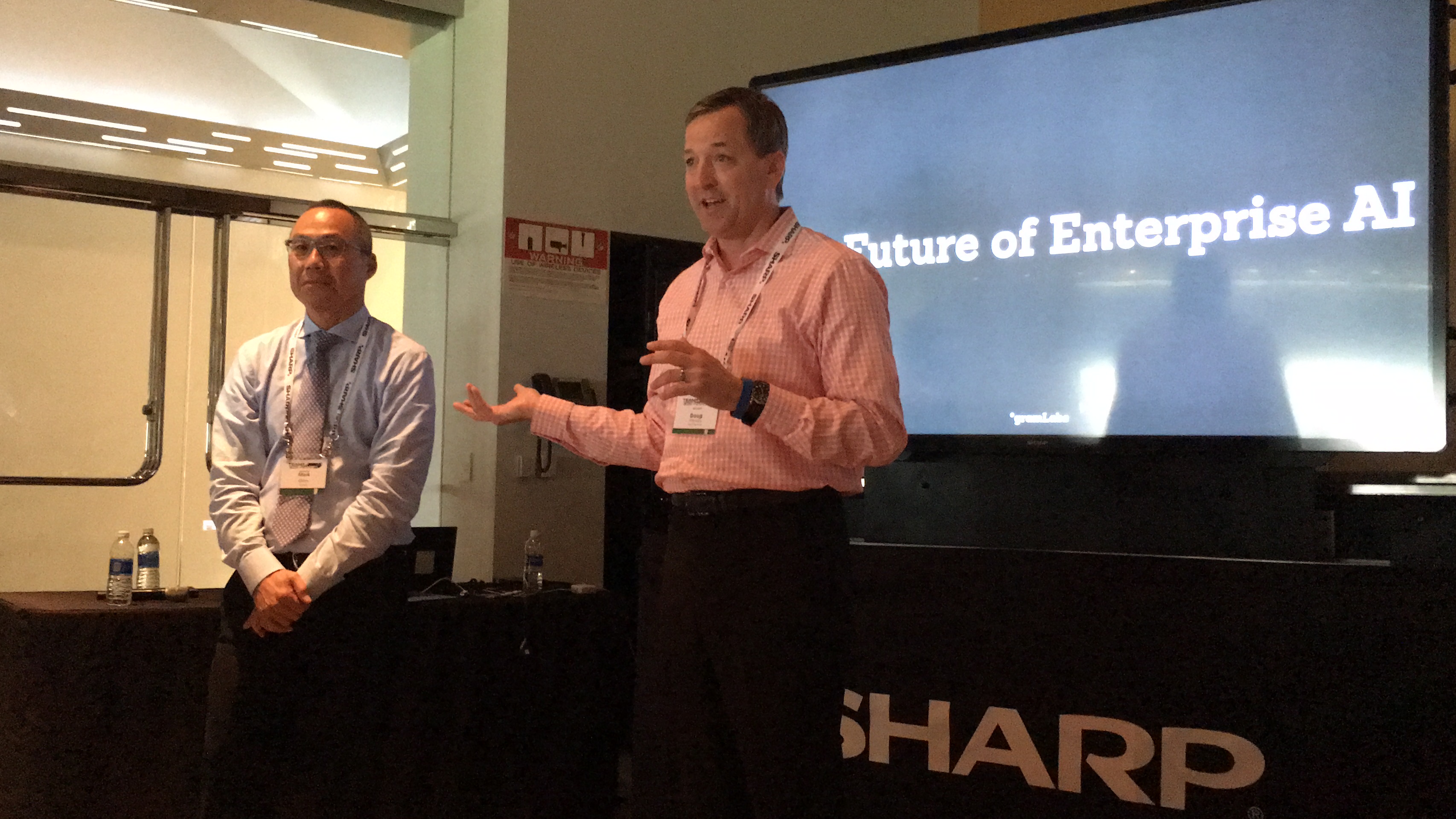 COO Mike Marusic then discussed What’s Happenin’ at Sharp. After plugging along over the last several years, Sharp is ready to spend some money to get the word out. They’ve tripled their ad spend for this summer and they’re putting funds towards other programs, such as a competitive MIF replacement program. They even have a program offering Omaha steaks for reps who sell Sharp MFPs! They’re spending more on digital advertising and since they’ve invested in this area, their website traffic is up 4X. Their goal is to route much of this traffic to the appropriate dealer websites.

They’re also targeting other brands in head to head product comparisons on their website. The first in what will be many was aimed at Ricoh. This page shows how Ricoh MFPs compare to Sharp MFPs based on findings from BLI. It’s great marketing material for Sharp reps and a powerful page to any customers that stumble across it. 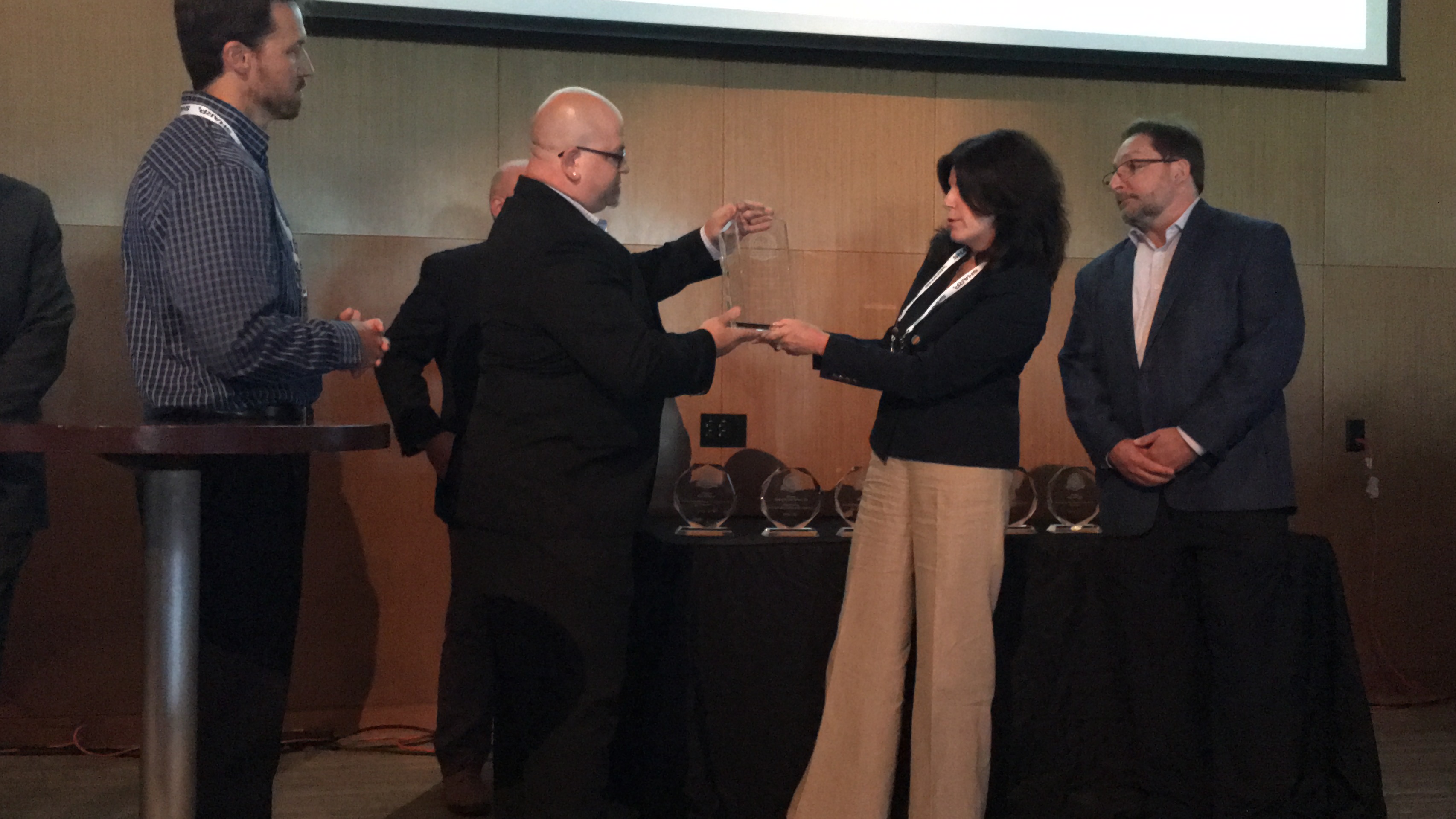 Mike then discussed Sharp’s position in digital touchscreen displays where Sharp, when combined with FOXCONN’s other two companies, collectively owns about 70% of the market. Sharp is fortifying their position as the digital display leader and the venue for this event seems to serve notice of that, selling 2,400+ of these displays to the stadium we were seated in.

Mike got pretty excited as he began to talk about FOXCONN and the access to technology that this relationship brings to Sharp. “There are a ton of new toys,” Mike told listeners. One such toy is the forthcoming relationship with Skywell, another part of the FOXCONN family. Skywell makes water coolers with big beautiful displays and a technology that allows customers to place them anywhere that they can be plugged in. 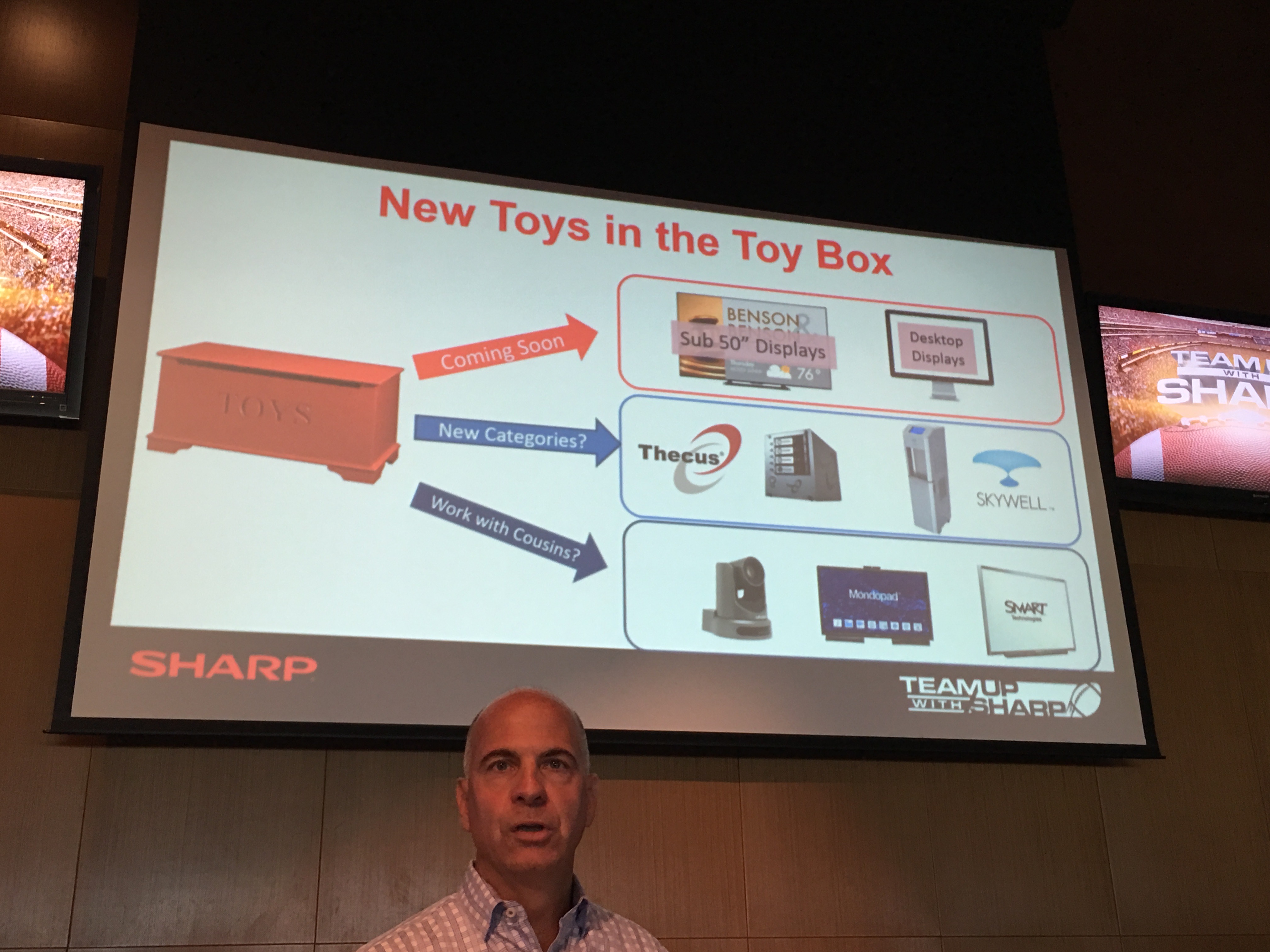 The cooler pulls water from the air, purifies it into drinking water and provides dealers with a simple, easy to sell product line that customers will love. Any office using traditional 5-gallon water bottles will appreciate the space they save in storing these large bottles as well as having to lug those big heavy bottles from storage and place them onto the cooler each time the old one runs dry. There are some issues with the coolers that currently affect how well they work in certain environments. You need a reasonable amount of humidity, so maybe Arizona won’t be the jumping off point for these, but other markets may do very well with them. 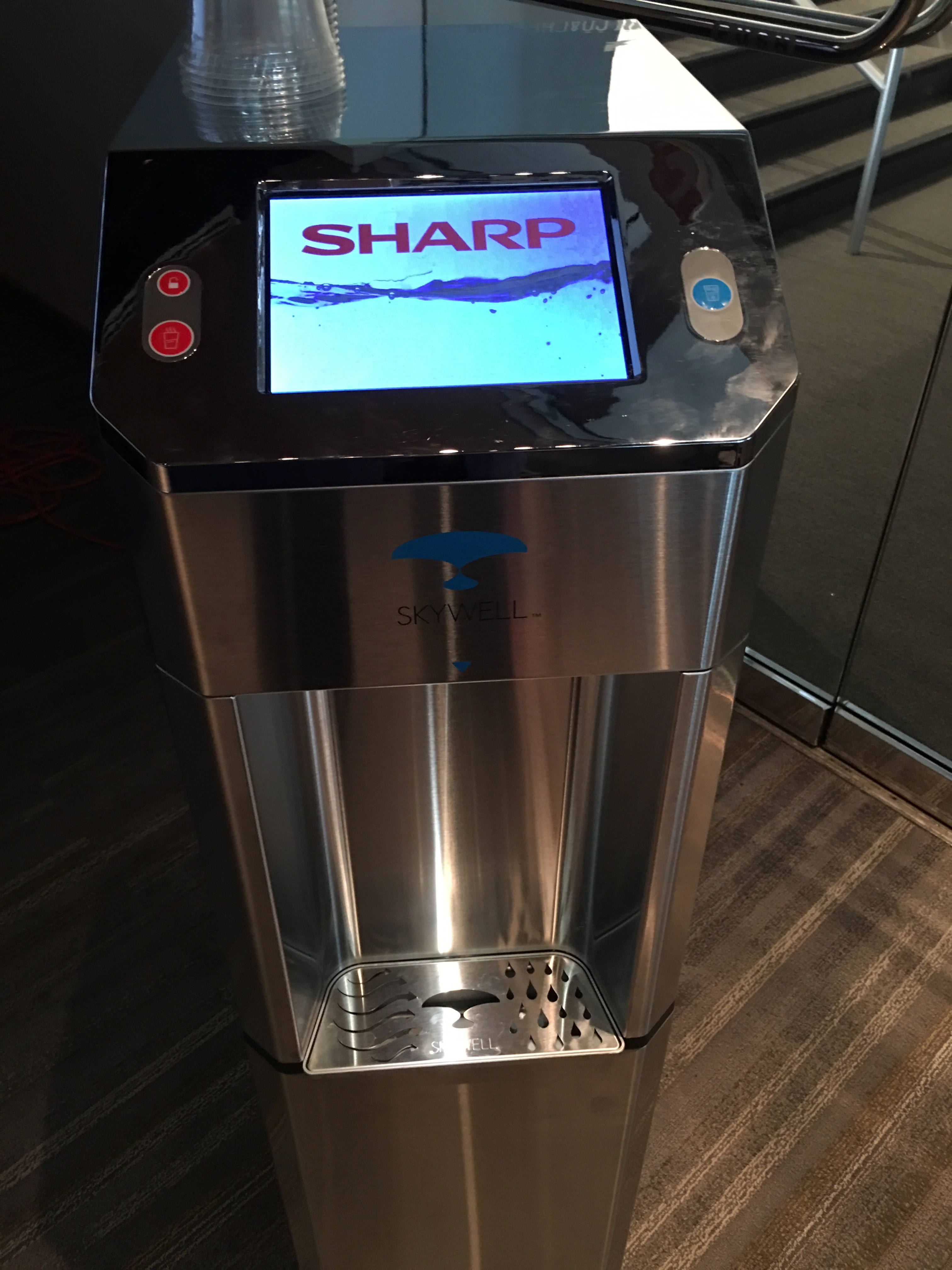 This is one of the first products coming out of the FOXCONN portfolio and there will be more. Sharp executives can’t wait to bring more technology and peripheral products to their dealers. Going forward, copier dealers need to diversify and as print continues its slow decline, there are plenty of places they can make money. Managed Services, content management and other specialized areas represent great opportunities. Water coolers may not be for everyone, but there are several dealers out there making a ton on them and they can tell you there’s money to be made in that market.

FOXCONN is the largest electronics company in the world and Sharp is a part of them. We were told early on that FOXCONN would infuse money into Sharp and it’s clear that they have. They have built a state of the art headquarters, moving from their antiquated building in Mahwah, they’re spending more on traditional and digital advertising and based on their product roadmap, they’re spending on R&D.

FOXCONN is clearly very interested in Sharp as well, sending a very senior representative to participate in a road show event in NJ. The relationship goes both ways and the FOXCONN people are looking at this channel as an opportunity to expand their distribution.

Mike talked about the importance of partnerships, such as the one with Lexmark for A4 printers and MFPs and the one with Clover for managed print services. Sharp is leveraging relationships with industry leaders in order to fill gaps and add value to their offering. 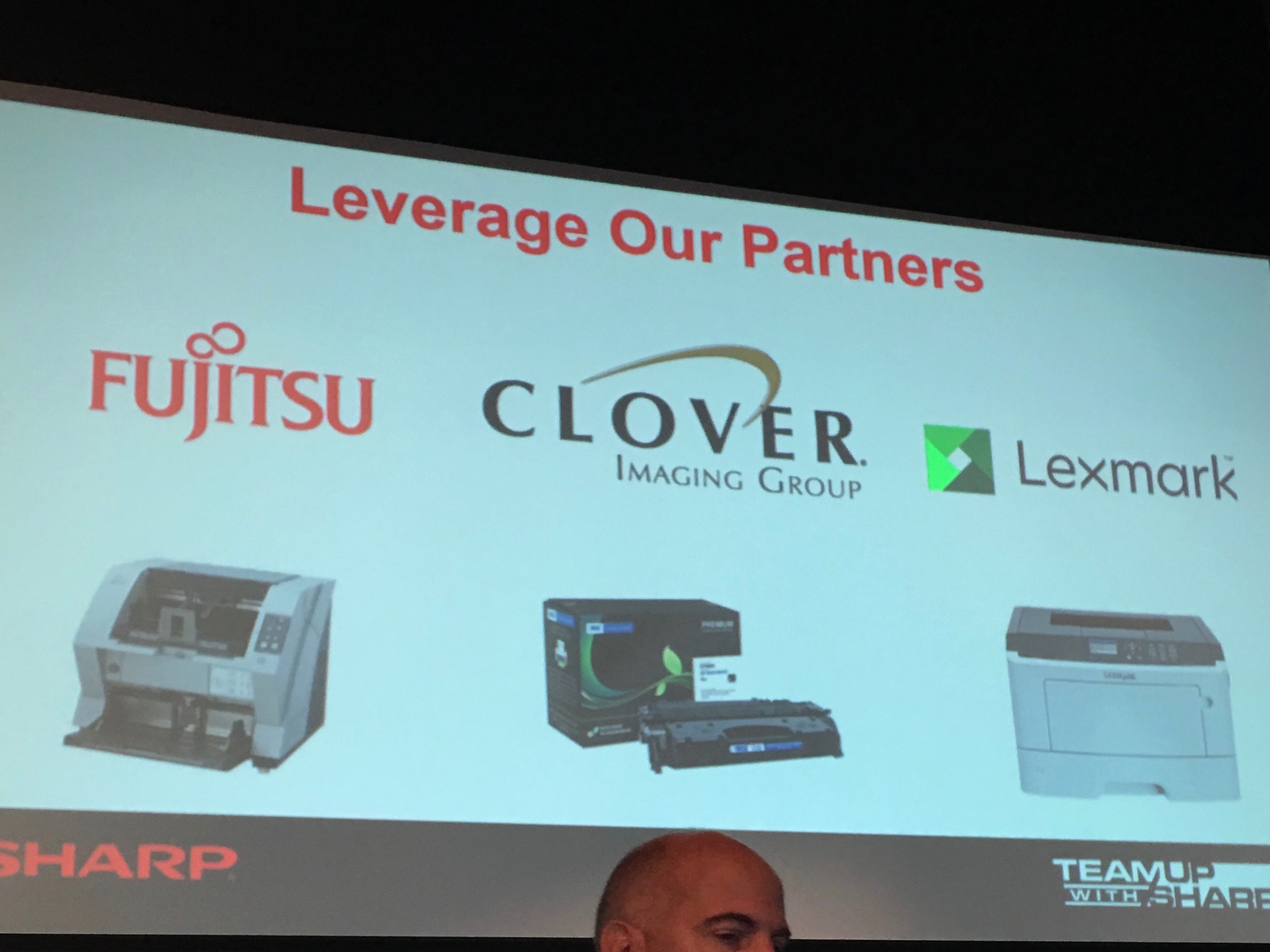 Mike spent some time talking about numbers, which Sharp is one of the few companies (3) that actually certifies. Everyone is pretty much down, although Sharp is ahead of plan, so they’re happy at the moment.

Next, Shane Coffey came out to tell us about the future printing products Sharp will be launching over the next 18 months. Of particular interest to me were the five A4 products on that chart; Sharp’s first combined collaborative development on printers with FOXCONN. Again, the power of this relationship between Sharp and FOXCONN springs its head. Sharp now gets development help from the largest electronics manufacturer in the world. They also get buying power from this behemoth. FOXCONN manufactures a great deal of the components inside the devices, cutting out the middle man Sharp used to have to buy from. And in cases where they don’t make the parts and they need to go to outside sources, who has better buying power than FOXCONN? Nobody in this industry. 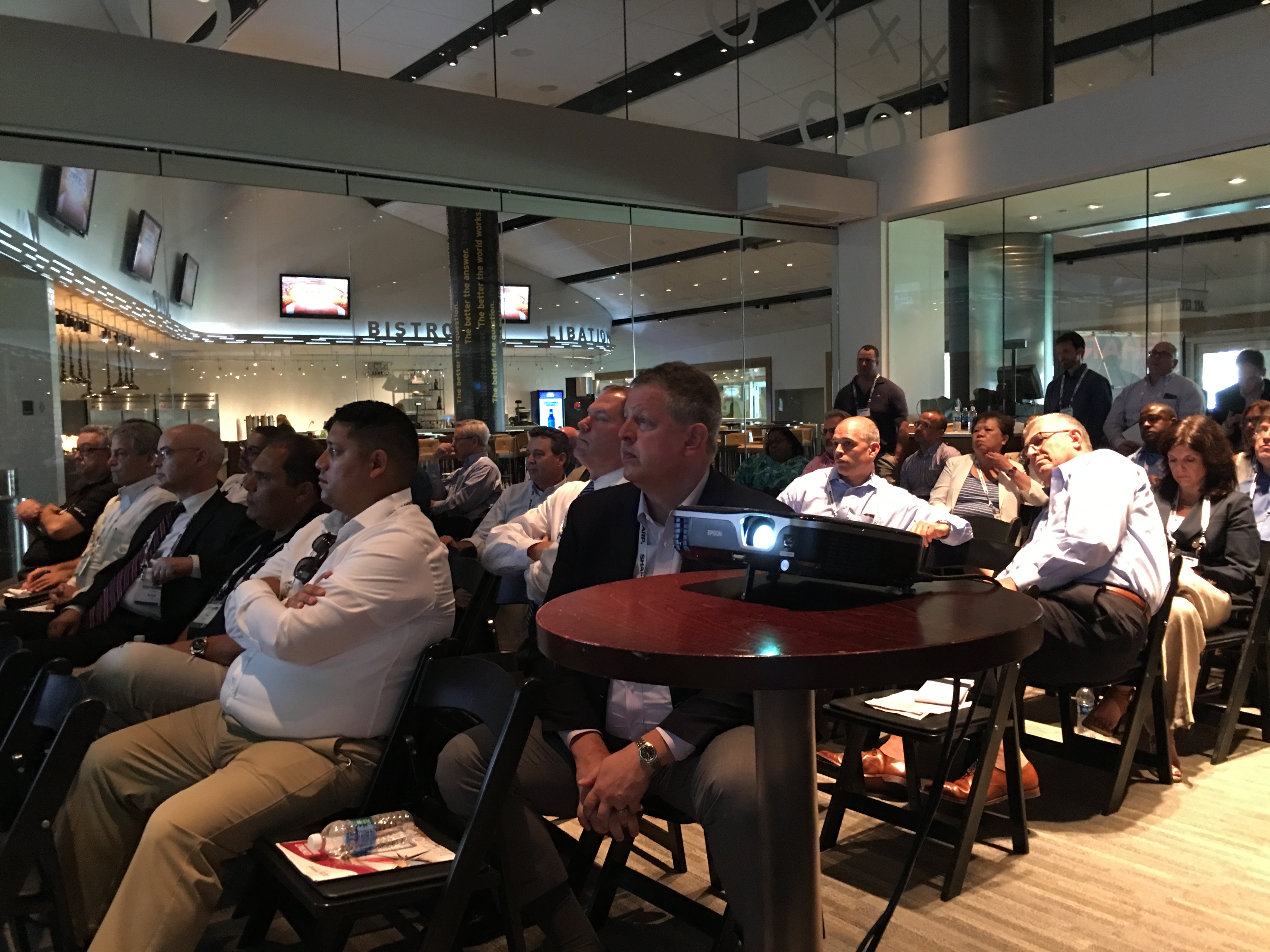 This collaboration between Sharp and FOXCONN will provide Sharp with the beginning of their own competitive A4 product line, something they have never had.

Sharp will also be coming out with five mono MFPs ranging from 30 – 60 PPM, all based on a common engine. I get what they’re doing here and this seems to be the trend with some manufacturers. By standardizing on a single platform and simply speeding up/slowing down the MFP, you provide dealers with a single set of parts and supplies to store and a single common engine to support.

From what I’ve seen, this strategy, while creating a service/supply manager’s dream portfolio, also has shortcomings on the sales side. For example, the sweet spot of these devices is in the middle, in that 40 – 50 PPM range. At 30 PPM, the device is too robust (and typically more expensive) than comparable machines in that range. And at 60 PPM, the MFP may not be competitive, as machines in that class born of this strategy often carry inferior finishing capabilities, much lower cartridge yields and lower paper capacities. For customers running any volume on machines like these, there will generally be considerably more service interventions.  We’ll see how these spec out; maybe Sharp has addressed these potential issues.

Click here to view all event pictures and videos

We then heard more about digital displays, where we were told that Sharp plans to launch 40 new products during 2017 and 2018, including 24 models that are what they called “incremental” models, meaning these products would be in categories where they currently don’t have products. Sharp is spreading their reach.

During one part of the presentations, BLI was invited on stage where they presented Sharp with a handful of awards based on their testing.

After the product updates, we heard briefly from FOXCONN’s Mark Chien and then from another FOXCONN partner working on Artificial Intelligence (AI). This is another area that Sharp will be delving into through their FOXCONN parent. The AI demo we watched was pretty amazing. It was like a truly conversational (and useful) Siri. Sharp is looking at ways to integrate this technology into their products. It’s still early, but this is something to keep your eye on. 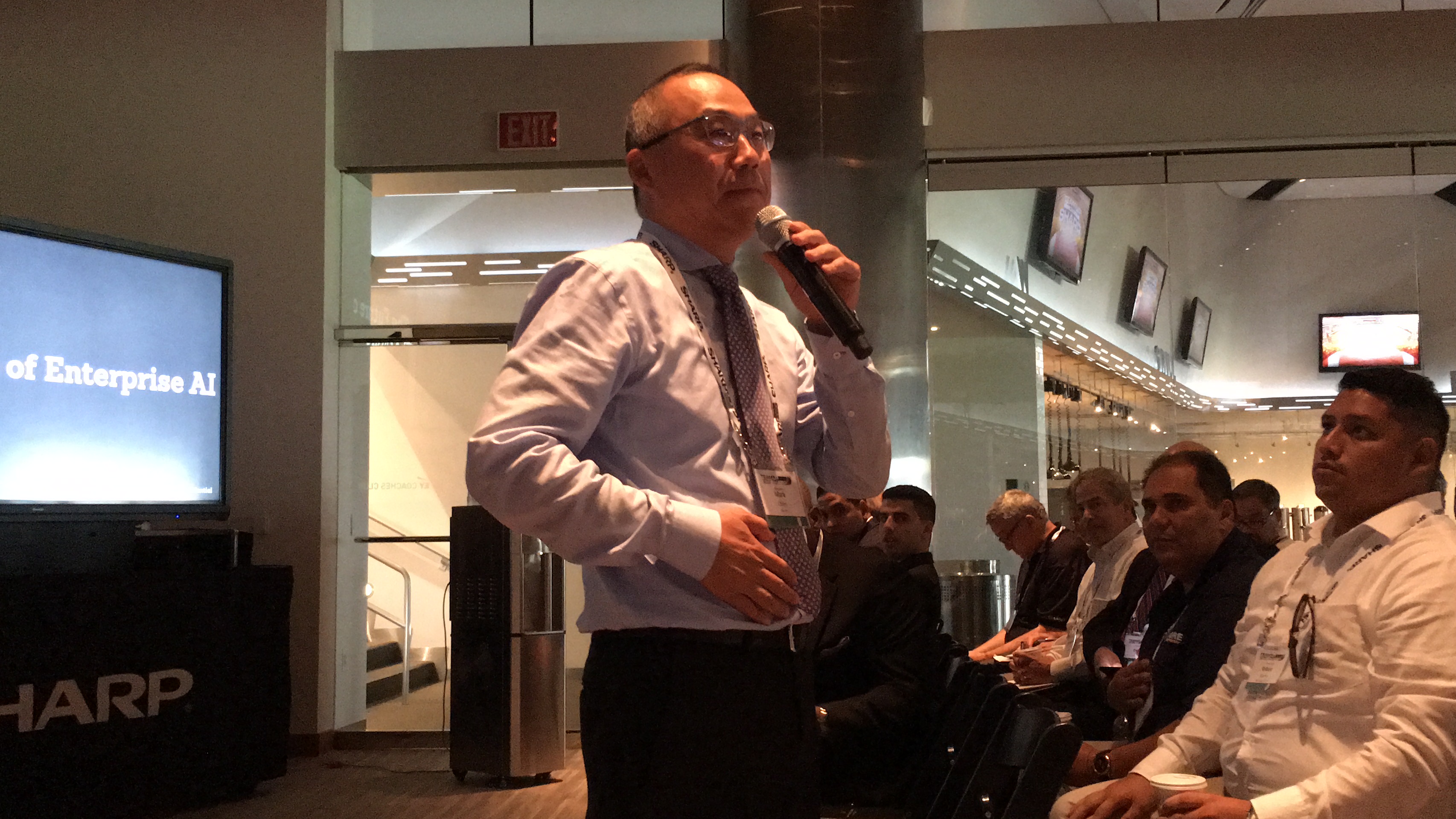 We then moved into the club room and had lunch. At the end of the meal, Marusic introduced Giant’s legend Harry Carson, who gave an inspirational and motivating speech to the crowd. After, Harry stuck around to take photos (including one wearing the famous What’s Happenin’ hat!) and sign autographs. He was a great guy and an eloquent speaker, especially for a defensive NFL player! 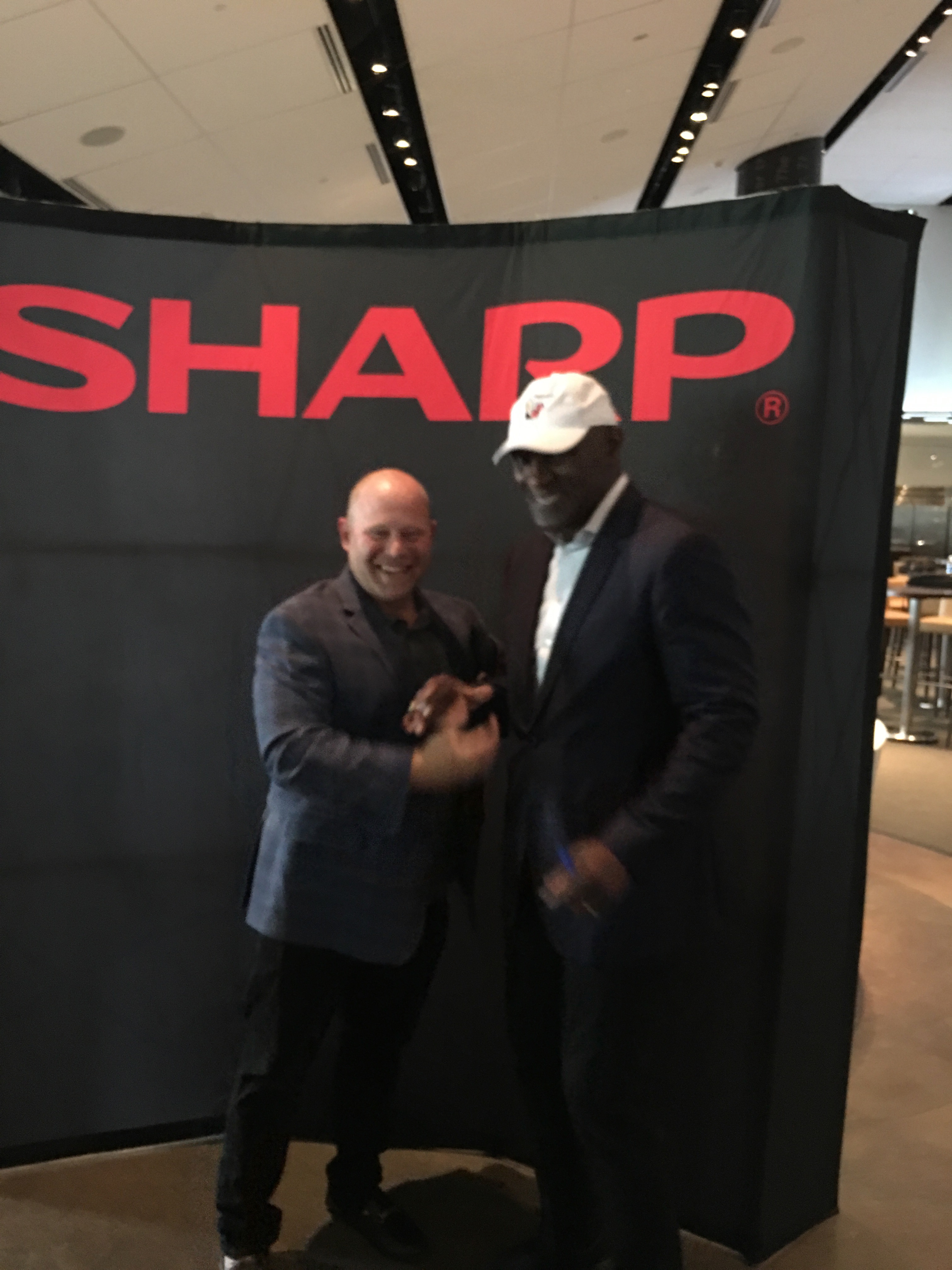 After lunch, there were sales and owner’s breakout sessions as well as more product updates on production and mid volume MFPs. With a long ride back to Rochester, it was time to go.

Can you feel the momentum here? Sharp has been very quiet, but they have not been sitting idly. They’re beginning to flex their muscles and they’re in a unique position, both financially and with respect to technology. With the financial backing of FOXCONN and their portfolio at their disposal, Sharp is ready to become a different kind of vendor to their dealers. Not just copiers, but a true technology partner, offering a portfolio of products unlike anyone else.