Bad Iburg is located in Lower Saxony, not too far from Muenster. It’s a beautiful area and it was great to visit a part of Germany I hadn’t seen before. 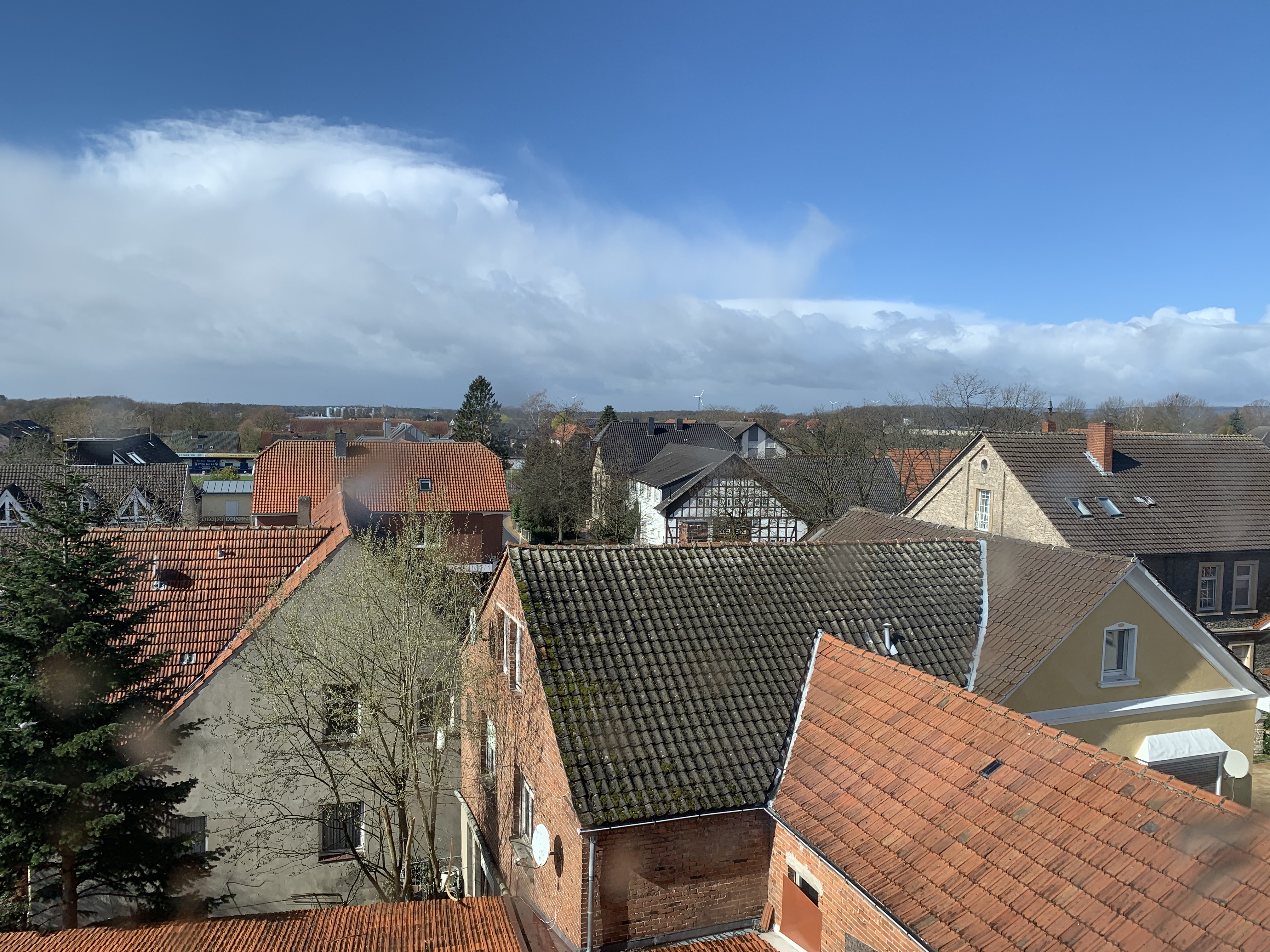 I arrived a day early and met Shalin Shah from NT-ware US for dinner. The hotel where I stayed a town over from NT-ware’s offices is something of a uniFLOW campus and it wasn’t long before our empty section of the restaurant was full of NT-ware employees from all over the world (US, England, Germany, Belgium…) . After a great schnitzel and a couple of large local “biers,” I was off to bed to get ready for my visit the next morning.

Shalin brought me over to HQ, a short drive away and we arrived nice and early.  We were met by Lex-Jan, Mary and Johannis and after a few What’s Happenin’ hat pictures, we sat down to talk about the agenda, which included a tour of the facility, lunch, an industry What’s Happenin’ briefing from me, NT-ware presentations from them and then off to dinner. 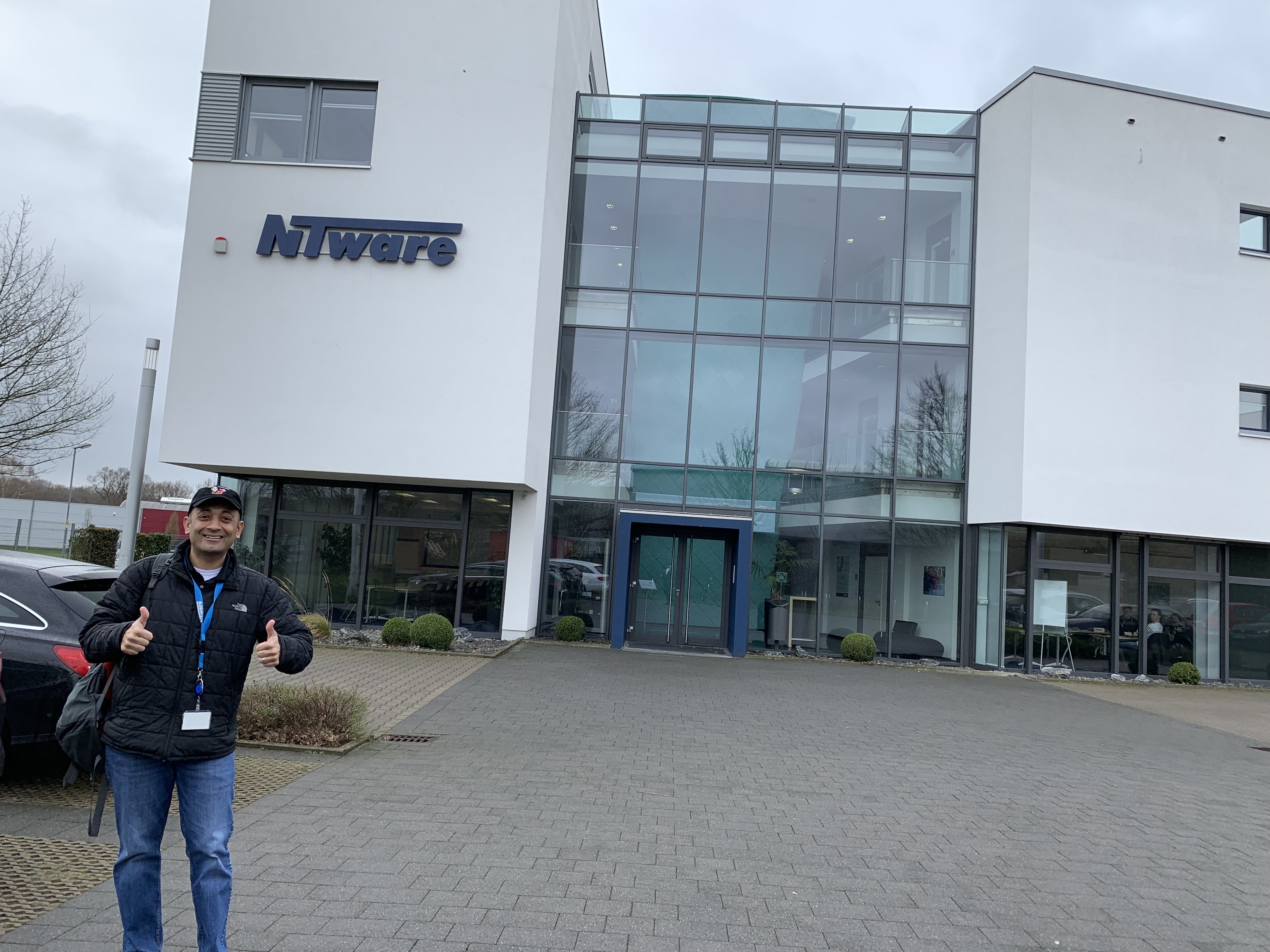 The facility is very German. It’s modern, quiet, well-lit and incredibly green from investments NT-ware’s president and CEO Karsten Huster has made in everything from natural heating and cooling to providing an electric car (a BMW, of course) for the constantly visiting NT-ware employees from other parts of the world. 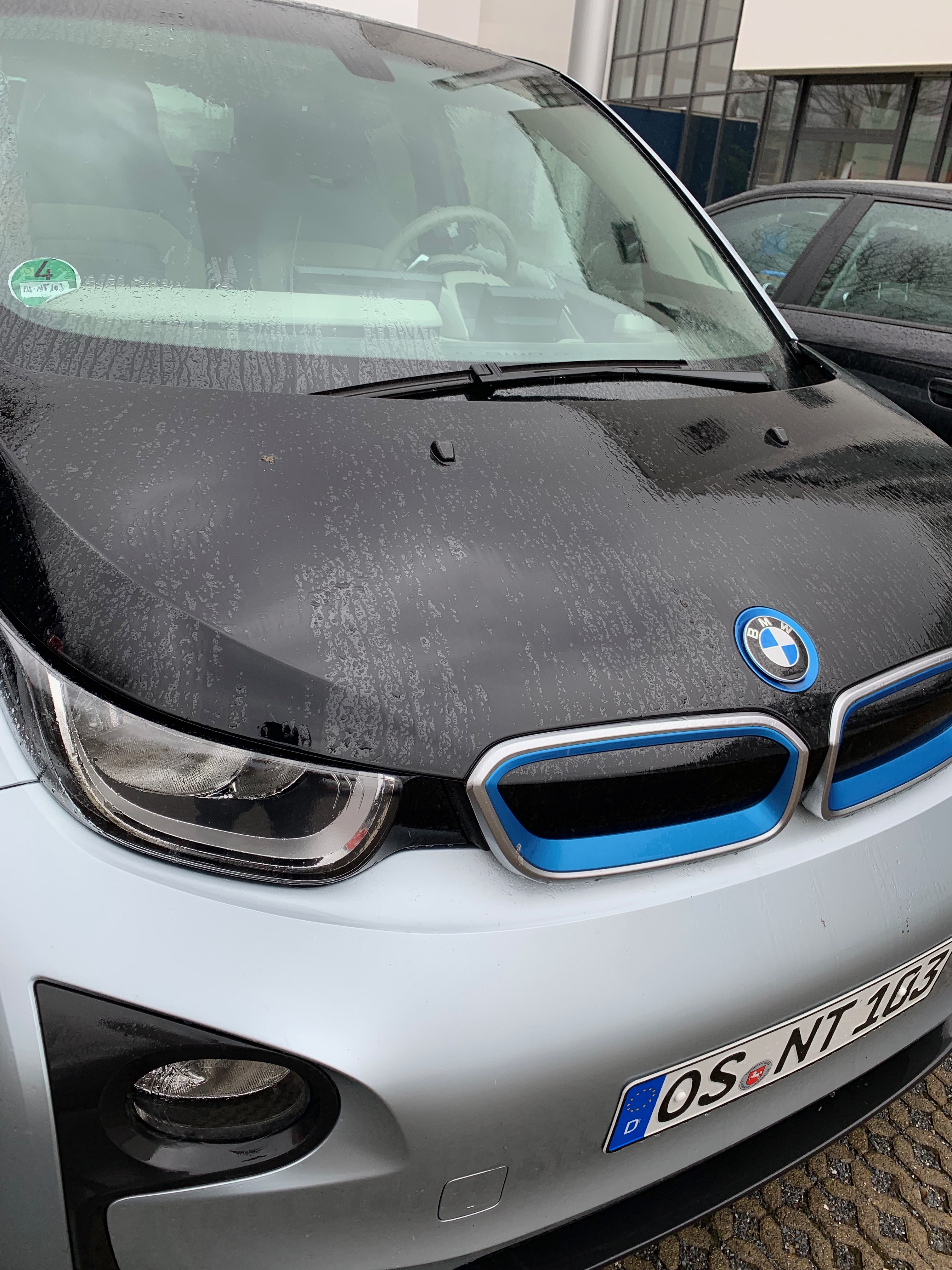 With almost 150 employees, the growing software company has been in this building for 11 years. They’ve already added onto the ultra secure facility and are planning yet another expansion pretty soon. Huster built it after outgrowing their previous offices, which I also had the pleasure of seeing during a walking tour with Lex-Jan. 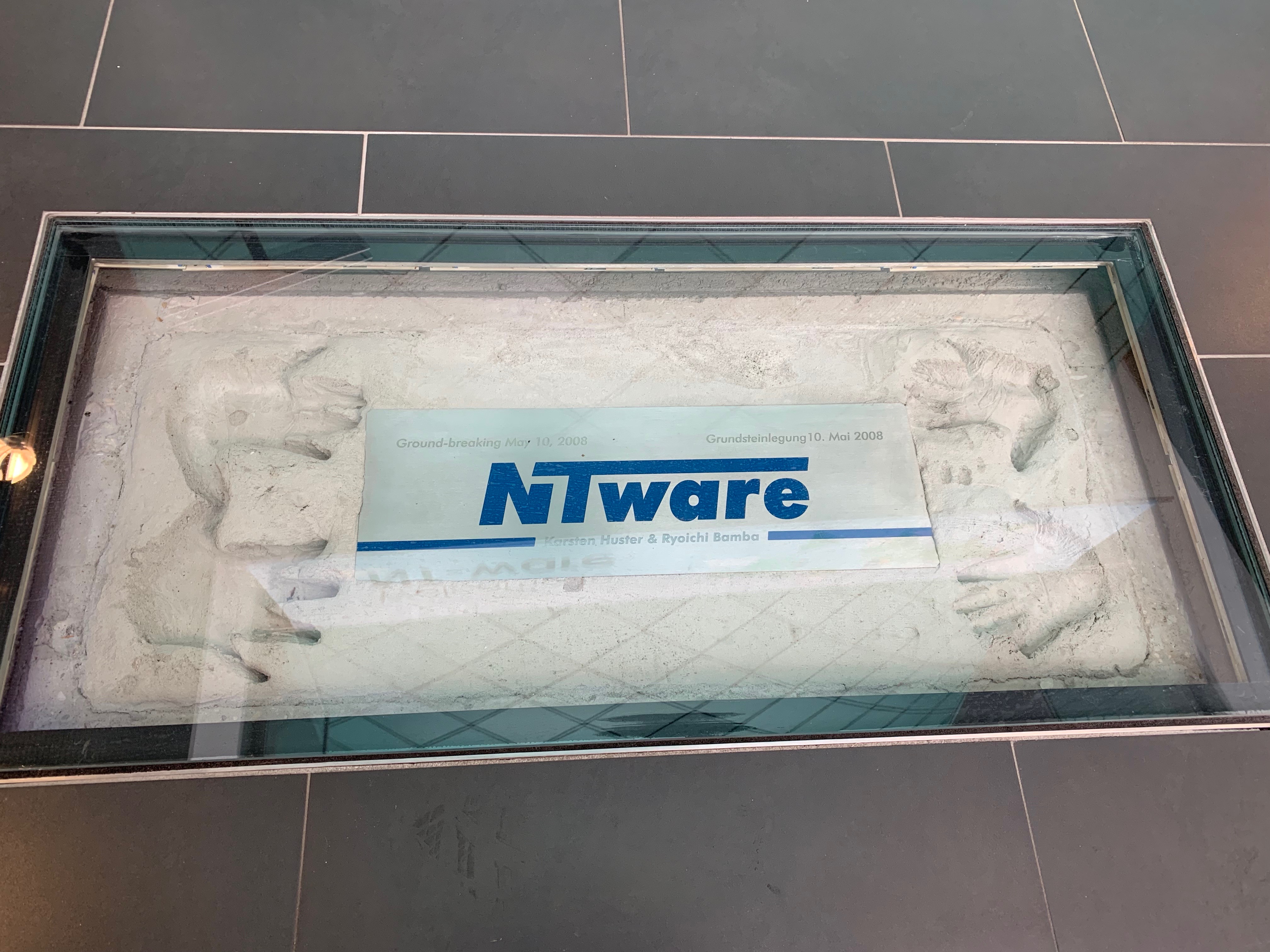 NT-ware employees are well-treated, to say the least. Each floor of the building is set with a barista area as well as a cooler containing a wide variety of beverages (waters, sodas, etc.). All of it is free. There is also a masseuse that comes in once a week, an annual team building getaway for all employees (picture skiing), the foosball table in the break area (Team Andy lost), the day care center, the video games…there are definitely a lot of reasons to come to the office, although many are able to work from home when they want to. 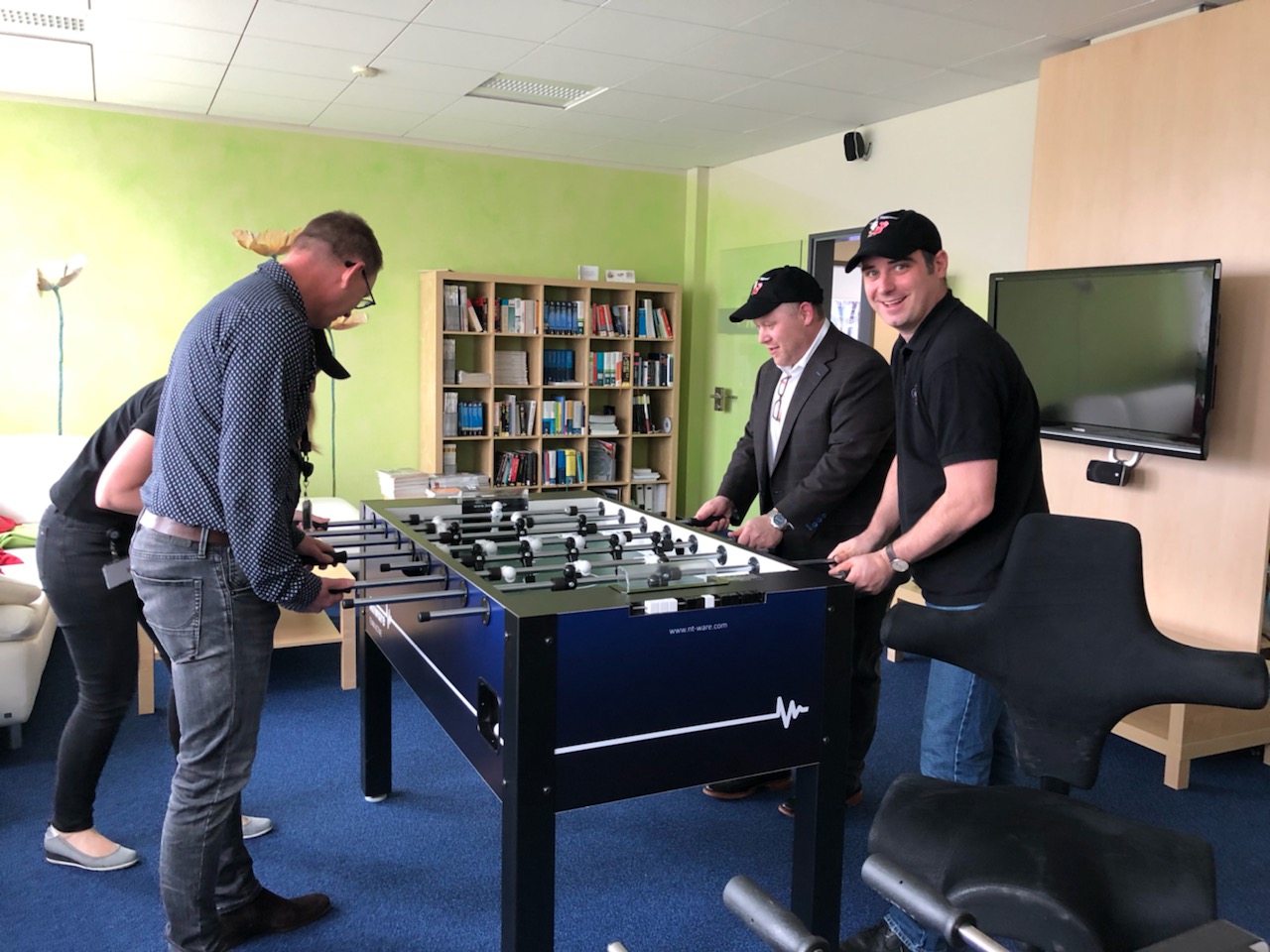 The NT-ware lab was pretty amazing. They had a massive variety of printers set up so they could test their software on them at any given time. imagePRESS production gear, imagePROGRAF wide format, Océ gear, imageRUNNER ADVANCE MFPs; it was all there. And not just Canon hardware. One of the best parts about NT-ware is uniFLOW’s ability to work with nearly every brand. 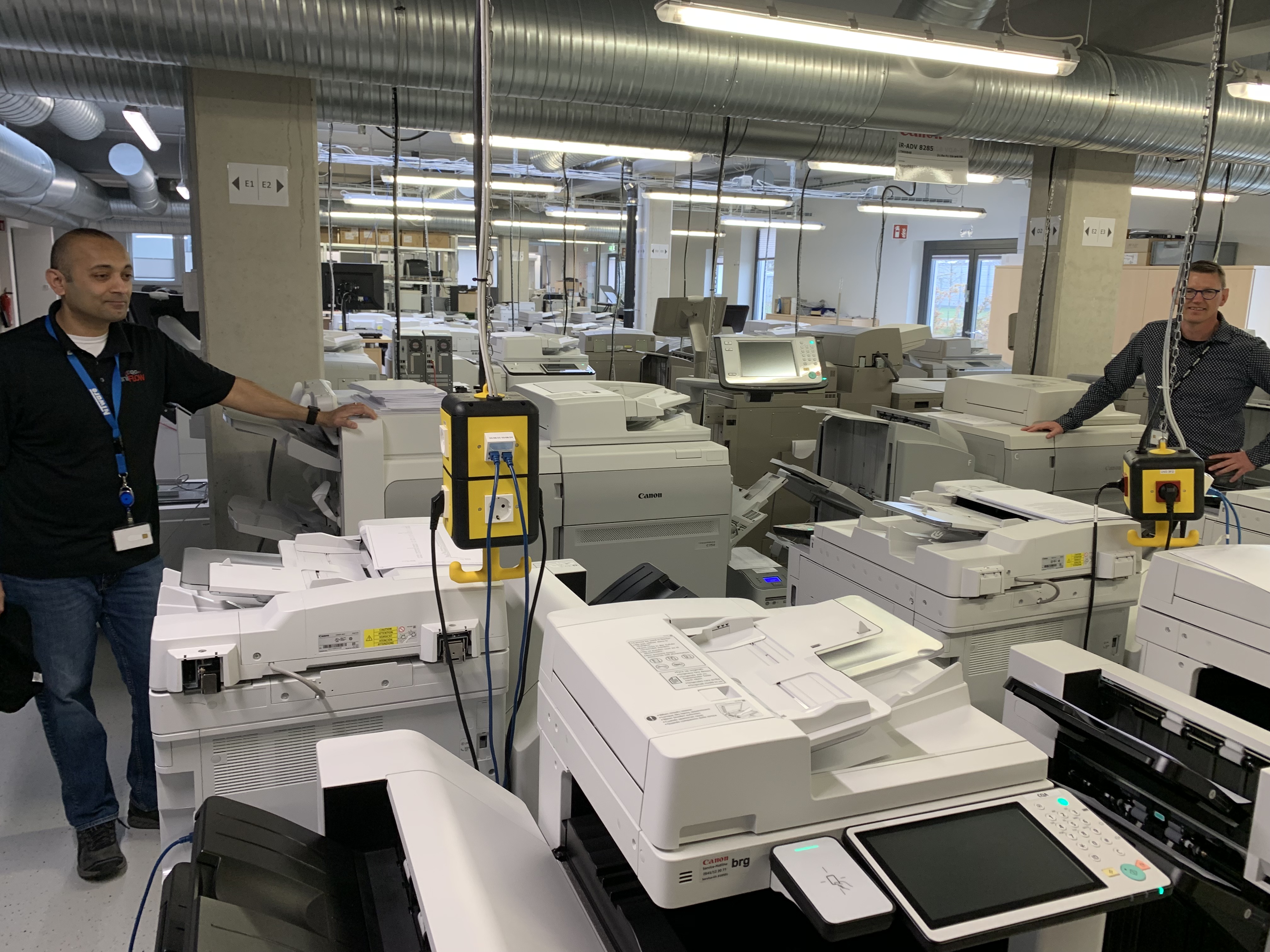 In 2007, Canon acquired a majority share of NT-ware, making the German software company not just a partner, but an integrated solution and a potentially very important part of the Canon hardware offering. Today, every Canon imageRUNNER ADVANCE device ships with at least some version of NT-ware. I’m guessing over time that having their software embedded in the device when it ships from the factory will have a direct impact on their sale of licenses. We’ll see!

uniFLOW software is billed as a single platform covering print, scan and device management and they’re heavily focused on their cloud solutions, something they are a leader in according to my gracious hosts.

Later that afternoon, I spent some time doing my What’s Happenin’ presentation and updating the NT-ware people I was with on what I’m seeing from the hardware OEMs. You know you’re going over your allotted time when they stop you half way through for a dessert break. First time that’s happened to me and it was well worth it! 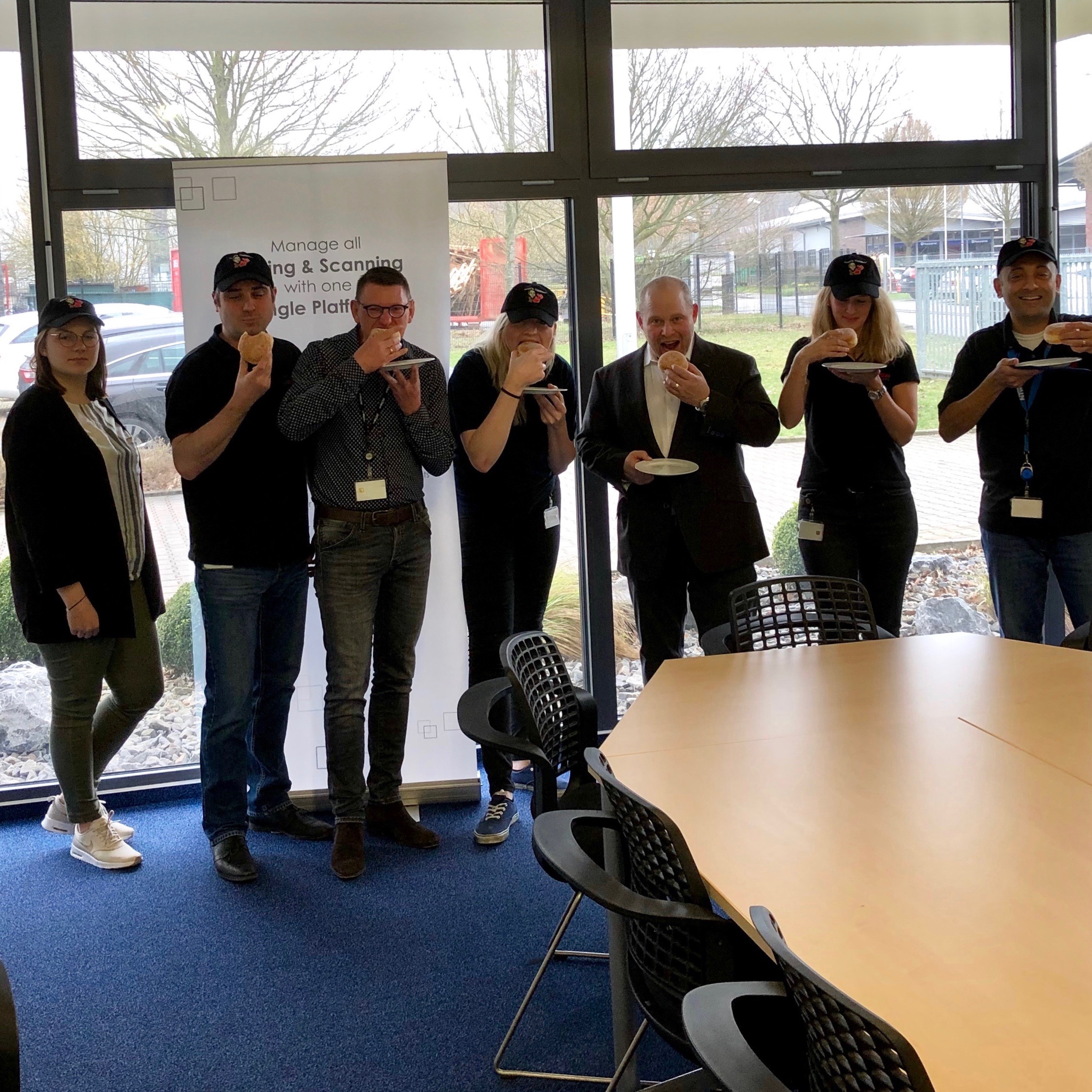 Their strategy to embed uniFLOW Online Express in every Canon MFP is brilliant. It’s the smart phone approach. If a button sits in front of you every day for 3 – 5 years, you will eventually press it. Many will try the free version. And some will want to pay for the grayed-out functions they first saw in the free version. And suddenly, the customer has a subscription.

Have you ever tried a free service, only to turn around and eventually buy the paid version? I feel like I have about 500 monthly subscriptions I’m paying for that started exactly like that, many of which I don’t even remember signing up for! It’s a great way to sell to customers and they’ve become conditioned to it (thank you Apple). 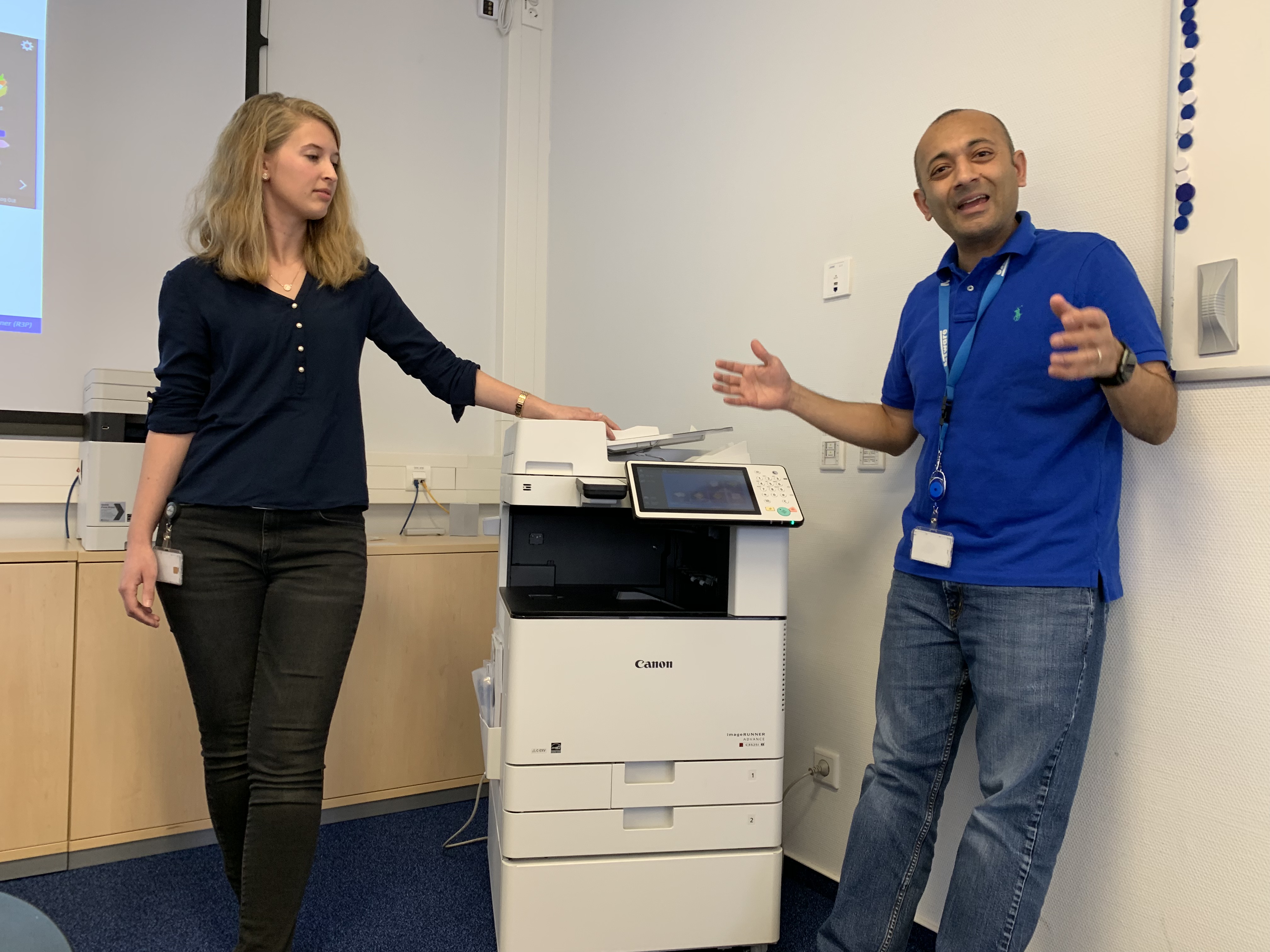 Speaking of signing up; they had me set up a uniFLOW Online account to show me how easy it is. The entire process took minutes. It was a snap. It really was incredibly fast, easy and INTUITIVE. Well done to whoever designed it. True story; the longest part of setting up my uniFLOW Online Express account was trying to come up with a password that it would allow. Apparently, it won’t let you use the word “password” in any way, shape or form no matter how many times you try. Seriously, that was the longest part of the process. I started at the machine, got an email confirmation and finished from there.

And pushing out to a fleet is also a snap because of their cloud offerings. No more going machine to machine for these guys! uniFLOW can be set up on an entire fleet remotely. 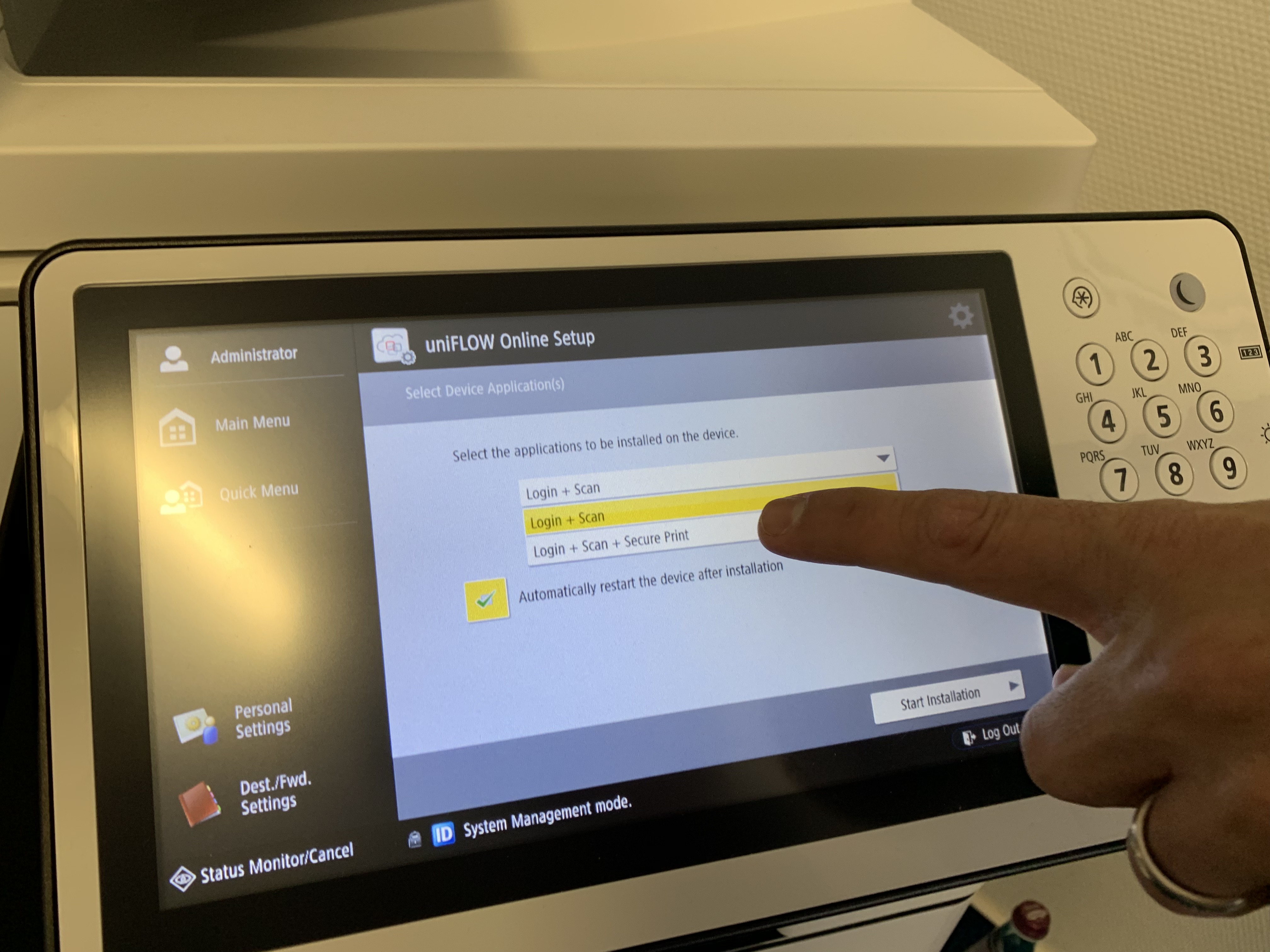 The visit ended with a fascinating presentation by “number one,” Peter, the original first employee after Karsten started the company. Peter talked about unique “outside the box” projects NT-ware has undertaken to solve customer issues. Quite often it’s these special projects where a customers says, “could you do that?” which drives the development of uniFLOW. Many of the specialty projects eventually become part of the core offering. It pushes their development, occasionally into new areas they hadn’t considered previously. 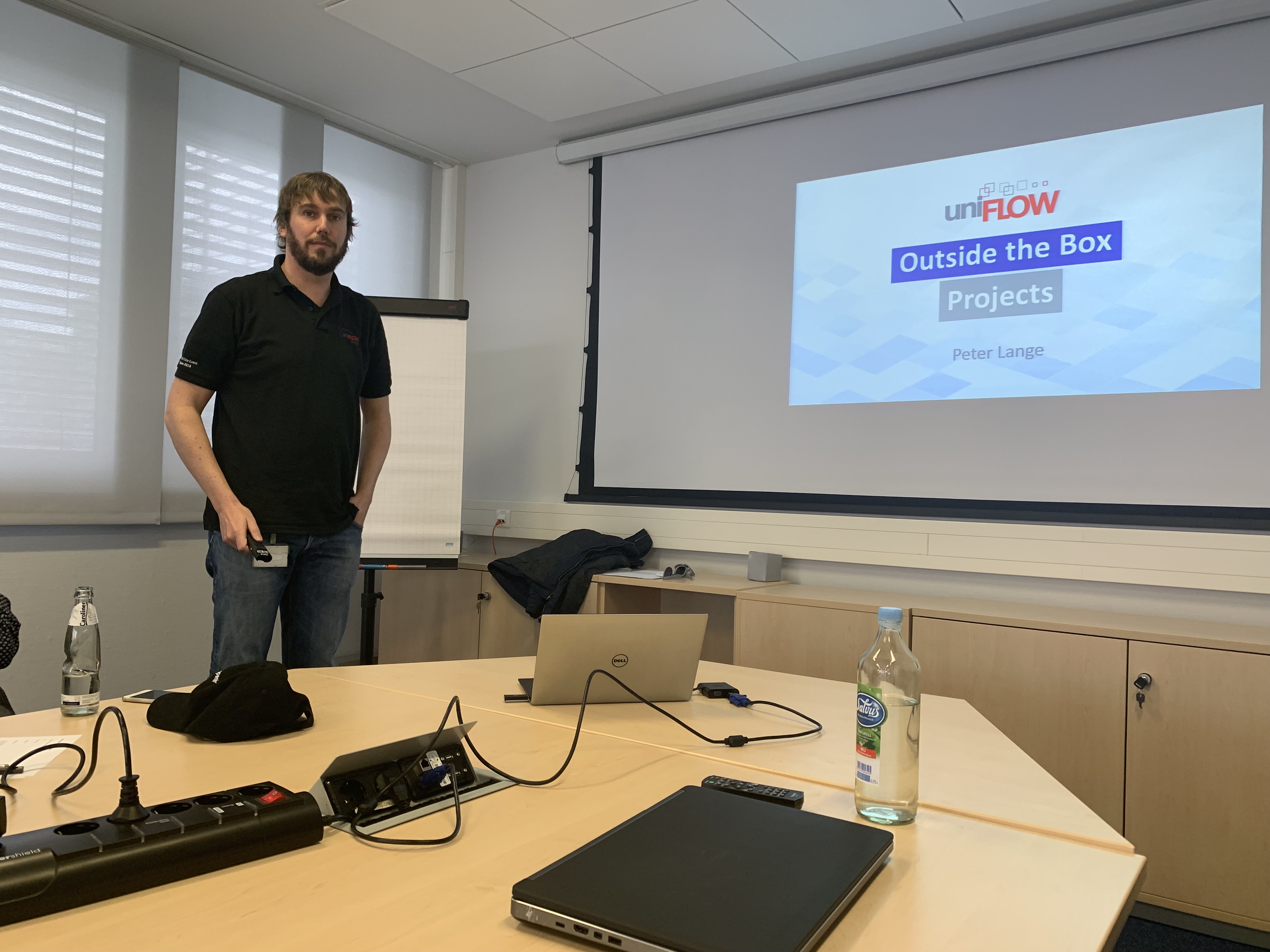 NT-ware has an incredible development program. They seem to spend as much time trying to break their own products (so they can fix them) as they do building new ones. Their R&D and Q/A is quite impressive and having a fully functioning lab of that size must be incredibly helpful to their efforts.

Being backed by Canon has provided a level of opportunity for NT-ware that few can match, especially when it comes to funding. Going forward, the embedded uniFLOW Online Express strategy should help hook customers deeper into Canon, which in turn will furnish more uniFLOW customers. It really is a great strategy. 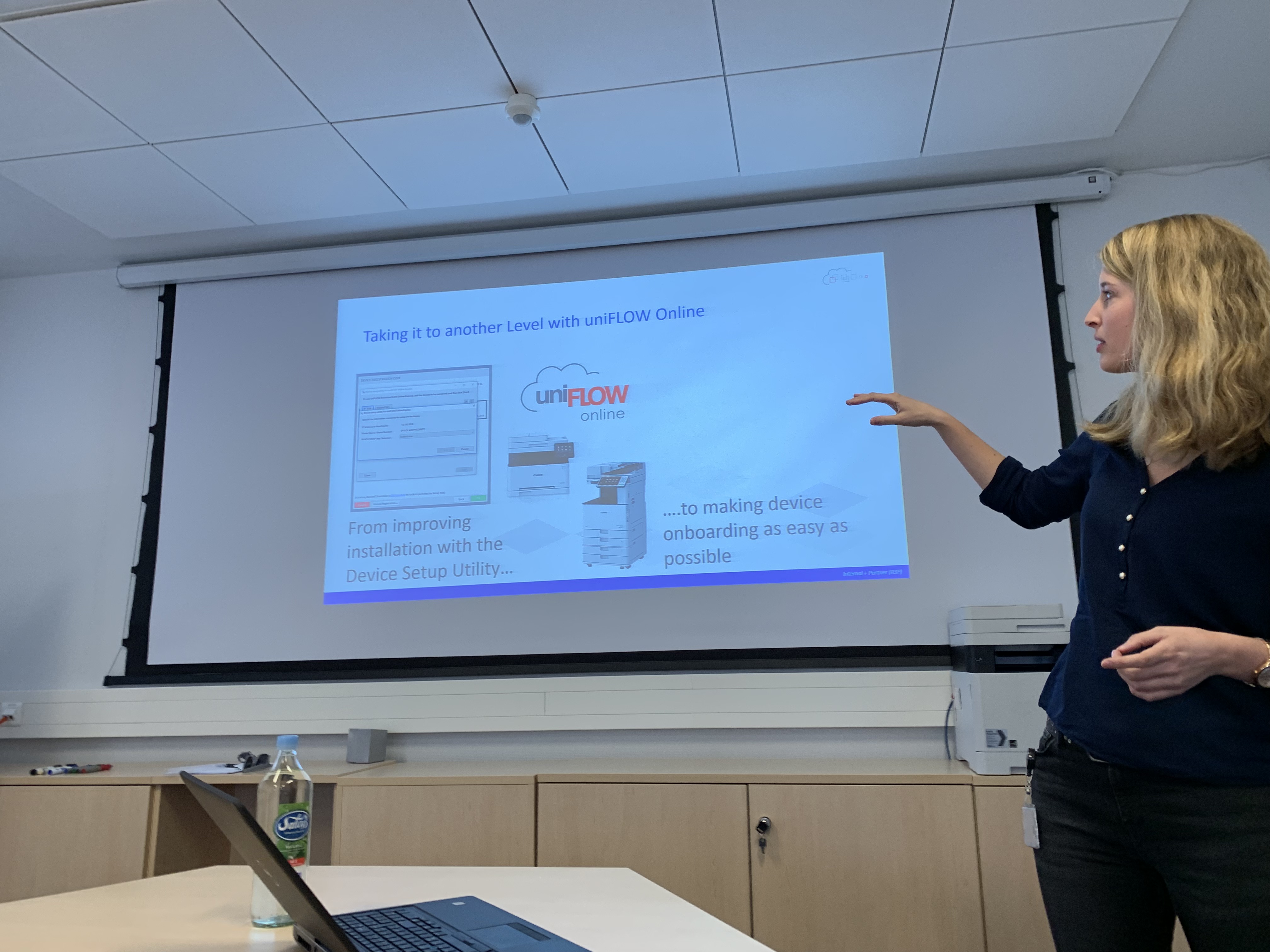 Karsten is a legend in his organization and while he was unfortunately in Japan during my visit, I can tell you that he has built quite a company. The building they built 11 years ago says so much about NT-ware. It stands out in the quiet sleepy town as this modern marvel. It almost seems like you’re in the future once inside and the level of security (partially due to being a part of the Canon family) is noticeable. No armed guards or anything of that nature, but a nice gate around the offices, lock-up rules at the end of the day (you don’t want to be the last one there), authentication cards and more keep the place locked up nice and tight.

The green factor also stood out to me during my visit. While I didn’t see him on this trip, Karsten is clearly a lead-by-example kind of guy. He drives an electric car. Not because it’s a cool car, but I’m told it’s because it’s electric and more environmentally friendly. The car he bought for his visiting employees to use is also electric for the same reason. The facility he built is heated and cooled using geothermal technology. He could have opted for traditional (and less costly) heating and cooling, but he wanted to make a difference. This seems to be the uniFLOW way. 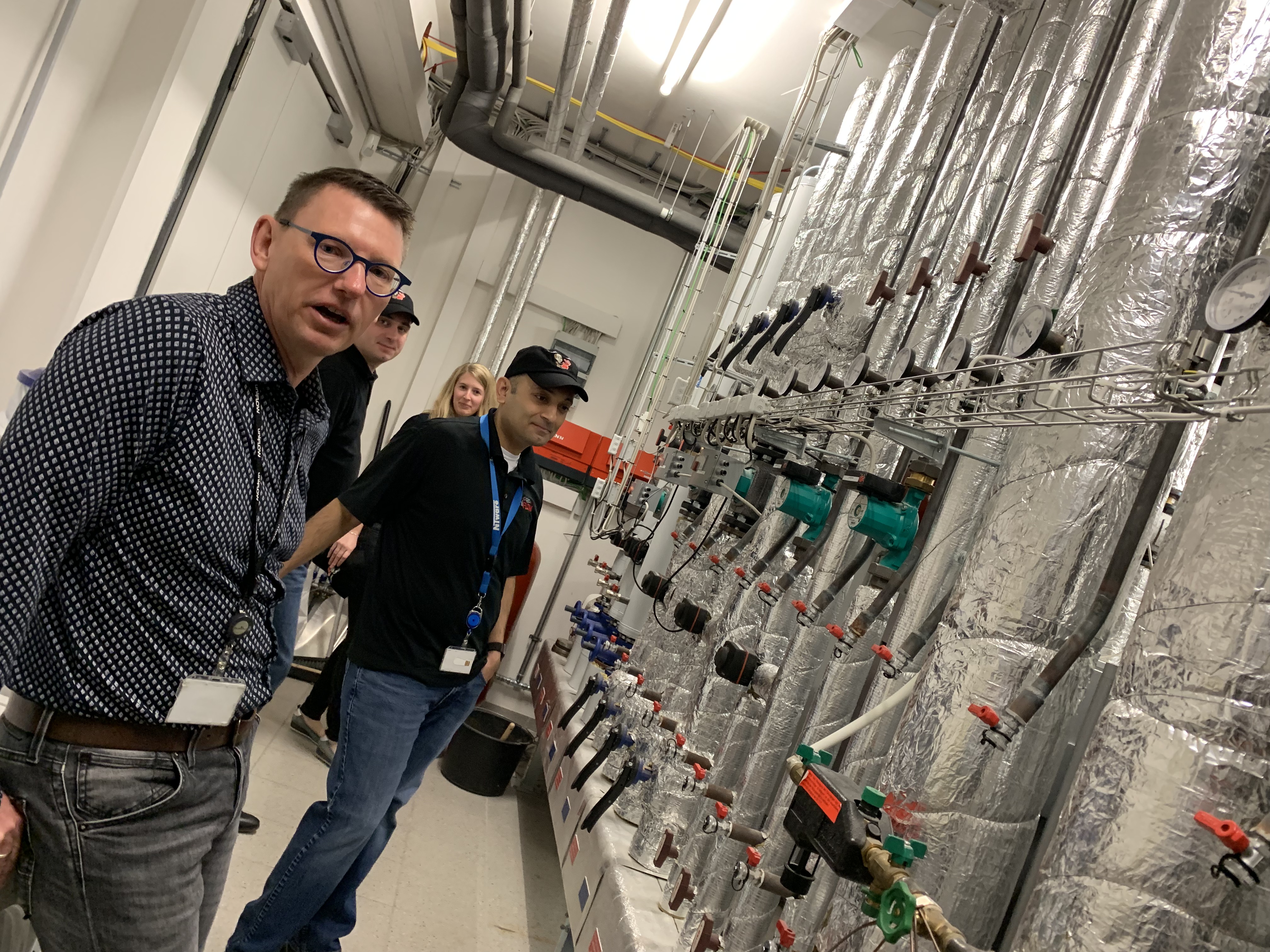 In all, it was an excellent visit and I learned a ton about uniFLOW online and the NT-ware culture. I greatly appreciate the invitation and the hospitality and I look forward to returning see what happens next!