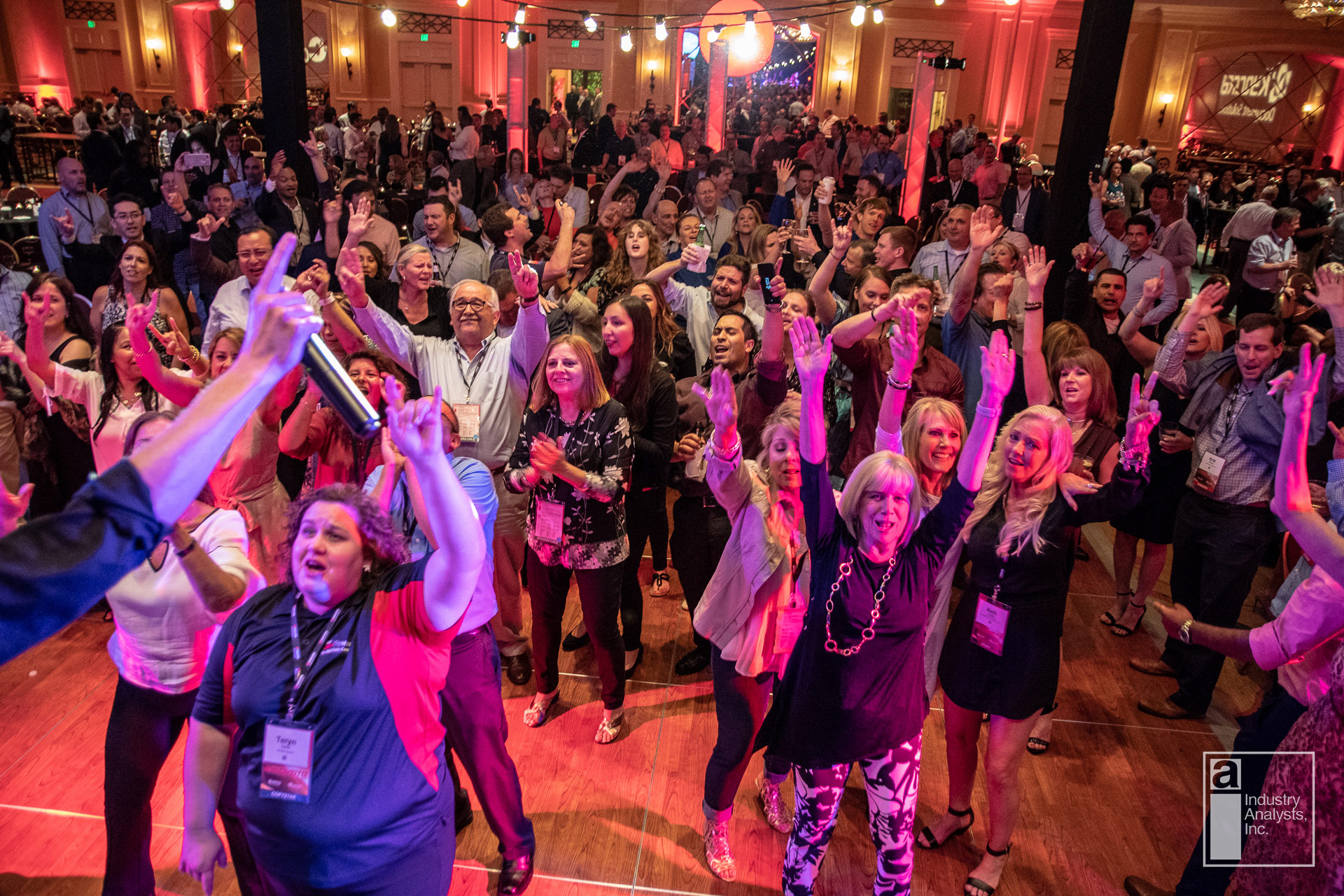 The event began with a nice welcome event on the 9th where dealers, Kyocera staff and partners mingled and reconnected. The next morning started bright and early with ESPN’s Hannah Storm taking the stage to discuss team work, a major underlying theme of this year’s conference. Rather than simply having their guest speaker give a keynote, Kyocera folded Hannah into the entire morning, bringing her out again and again to reinforce points and even to sit with VP Terry Knopsnyder in a short commentator-style session where the two looked more like sports broadcasters than event speakers. It was very well done and kept the meeting moving along nicely. 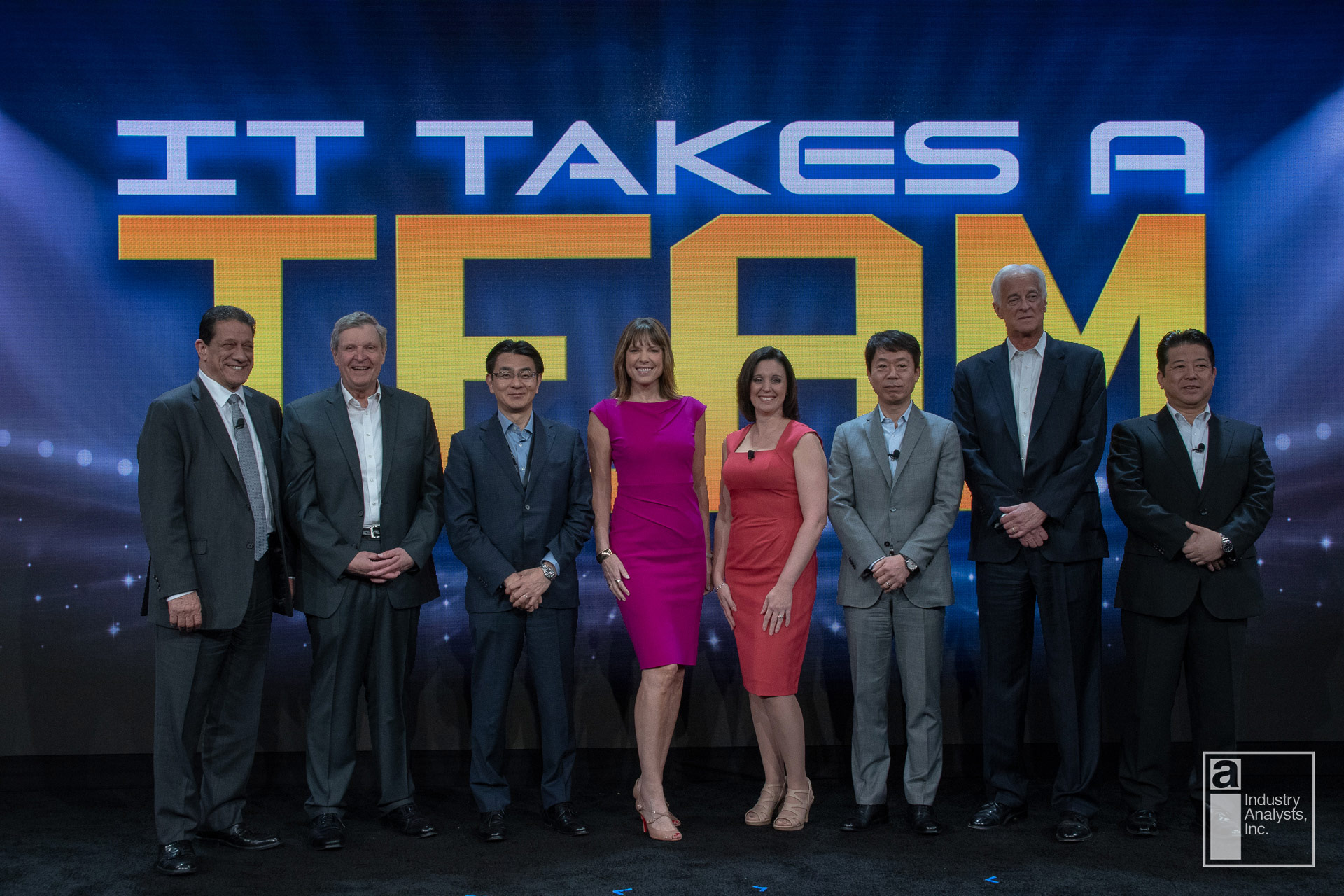 President and CEO of Kyocera global, Nori Ina returned once again for the conference and he gave us a 30,000 foot view of What’s Happenin’ at Kyocera and a review of 2017. Prior to running all of Kyocera, Mr. Ina was the president and CEO of Kyocera US and he clearly enjoys his visits to the states! According to Mr. Ina, Kyocera reported record sales for FY18, including a record in A3 and A4 color MFPs, which were up 14% globally. Kyocera has now sold over 2,000,000 units! He then went on to introduce the most significant product Kyocera has developed since their legendary ceramic coated drums back in the 1980s (in my opinion); the high speed inkjet TASKalfa Pro 15000c designed for the production print market. More on that later.

Mr. Ina discussed the expansion Kyocera is undertaking, building a completely automated scanner production line and doubling manufacturing productivity in other areas. He also chatted about ECM solutions and the DataBank acquisition and how important this will be going forward. This is interesting as the DataBank acquisition was in the US with little to no impact on other markets. Yet, Mr. Ina understands how critical ECM will be to Kyocera and I believe they will be looking for similar opportunities in Europe and elsewhere.

Following Mr. Ina came SVP Ed Bialecki, who discussed a core business expansion and 29 new products that will be released in FY19, including the new TASKalfa 9600, 11100 and 13600. The new monochrome 13600 series operates at 96, 111 and 136 PPM respectively and officially brings Kyocera into the light production market, a perennial weak spot for the venerable Japanese imaging manufacturer. Unlike the inkjet model mentioned above, this product family has been sourced from another manufacturer. 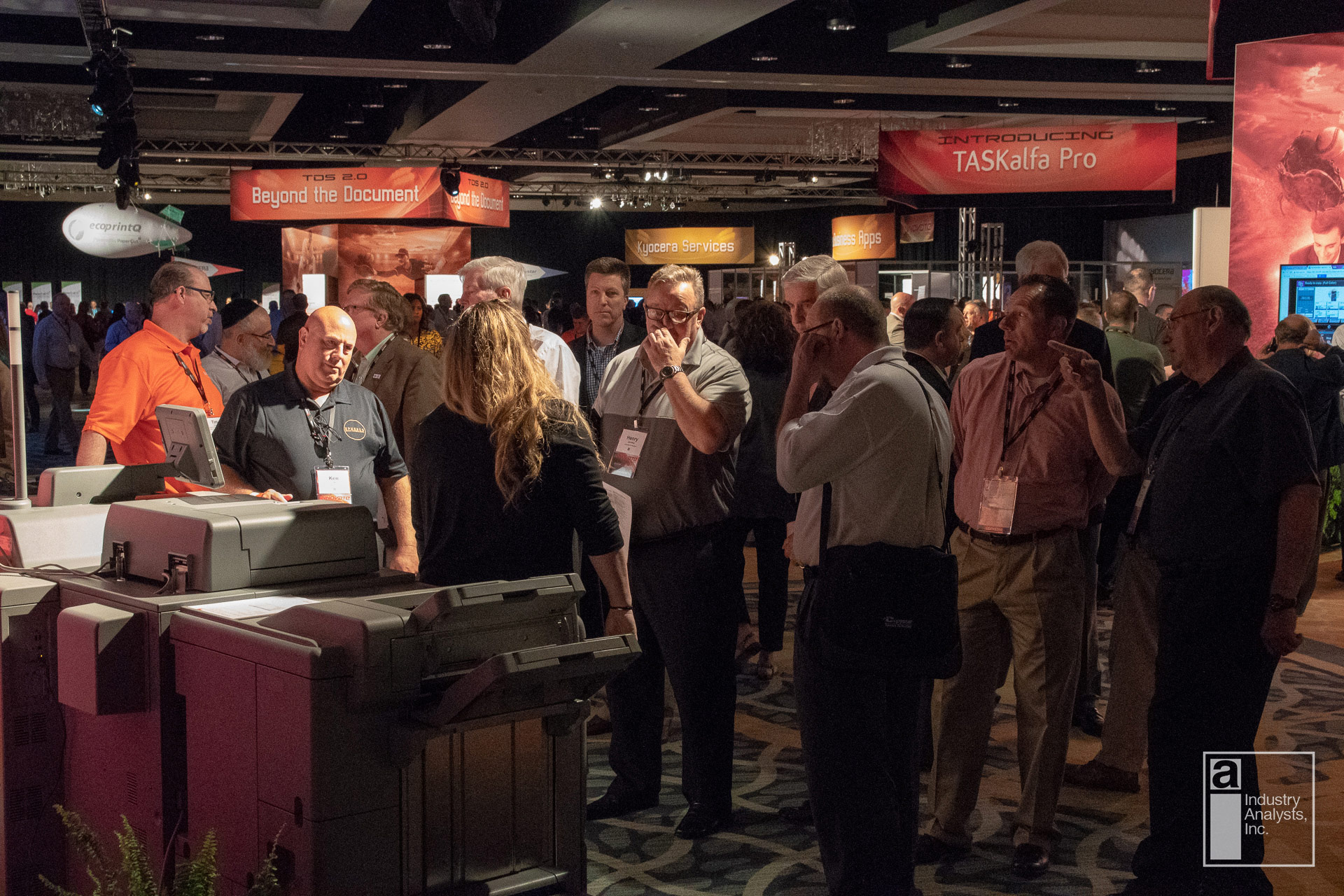 US president and CEO Yukio Ikeda then took the stage to talk about the numbers for the markets he supports. They were up. Mostly. All markets supported out of the Fairfield NJ HQ were up except for the US, which was flat. While flat isn’t necessarily bad, the numbers were not in line with projections made at last year’s meeting. It’s the first time in a while we didn’t see some level of growth from the US.

Next came VP Danielle Wolowitz who gave us an overview on the event and the Team theme we had been hearing about. The product fair was set as a baseball stadium and the Team theme was reinforced everywhere. Kyocera is making it clear that they are there for their dealers and do not expect them to go it alone. Her phrase “we got a guy for that” was repeated throughout the show.

Ed came back on stage to talk about the partners that were participating in this year’s event. It seems like there were fewer at this year’s show than at past conferences, but there were still some great names there, including ACDI, DocuWare, ecoprintQ, EFI, elatec, GreatAmerica, PaperCut and several others.

After Ed, we were treated to a keynote by Hyland president and CEO, Bill Priemer, who discussed the opportunities ECM and document management offers dealers. The relationship with Hyland was taken up several notches last year when Kyocera acquired Hyland’s biggest US distributor, DataBank. I had an opportunity to sit down with Bill and you can see our What’s Happenin’ in Person (WHIP) video below.

Then came the awards portion of the morning, where Kyocera’s /Copystar’s best dealers were recognized in each of the markets represented at this year’s conference (US, Canada, Latin America, Mexico, etc.). In all, I think there were 24 countries represented. Congratulations to you all of the award winners!!! 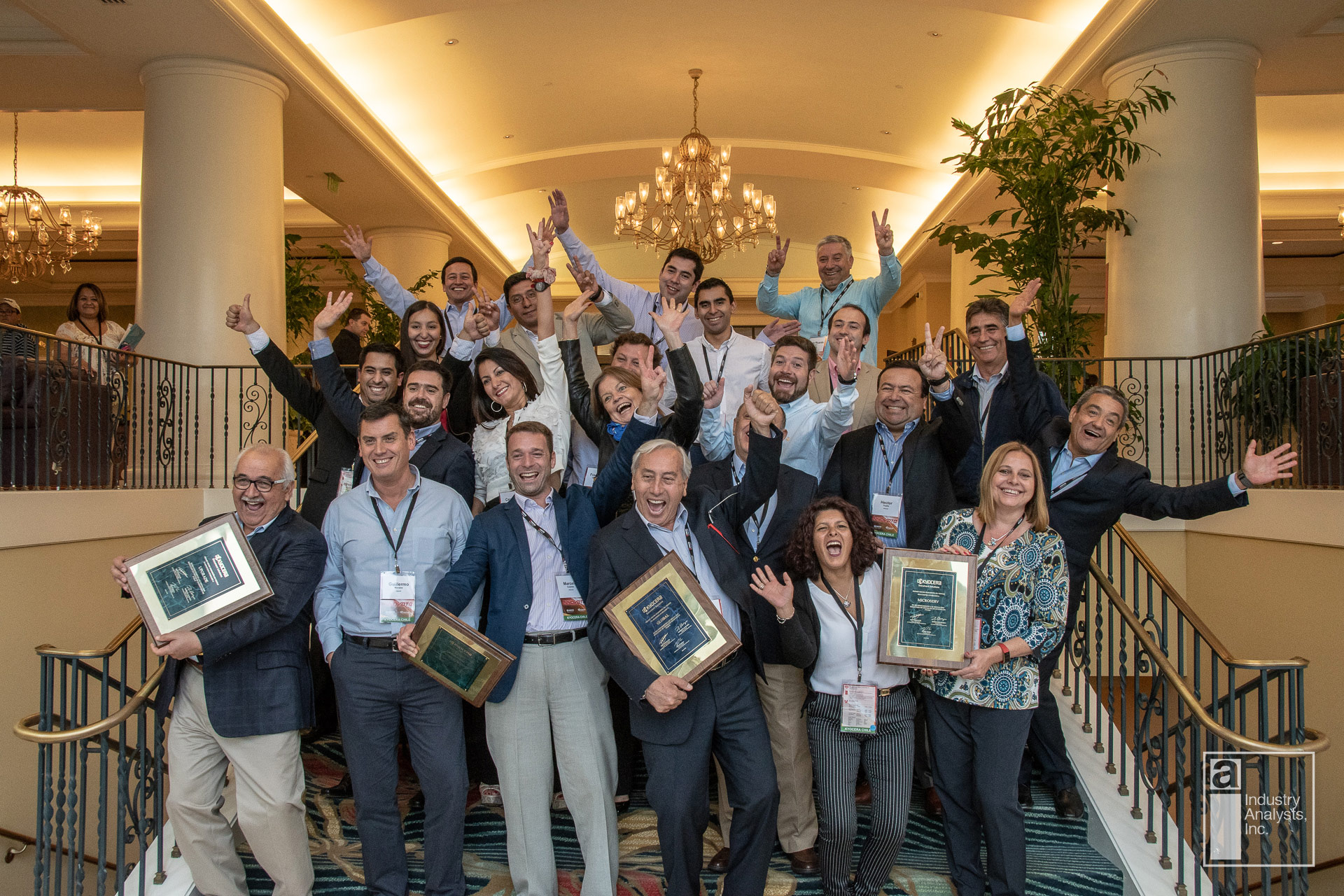 The morning ended with a great panel where dealer Bill Shuey of Phillips sat with Danielle, Chuck Bauer of DataBank, Bill Priemer of Hyland and Yukio Ikeda. Phillips has had great success with Hyland software and the DataBank relationship and it served as an eye opener to dealers on the opportunities that this relationship brings to the table. You’re all trying to get “sticky” with your accounts, and this is a great way to do it based on what I heard. 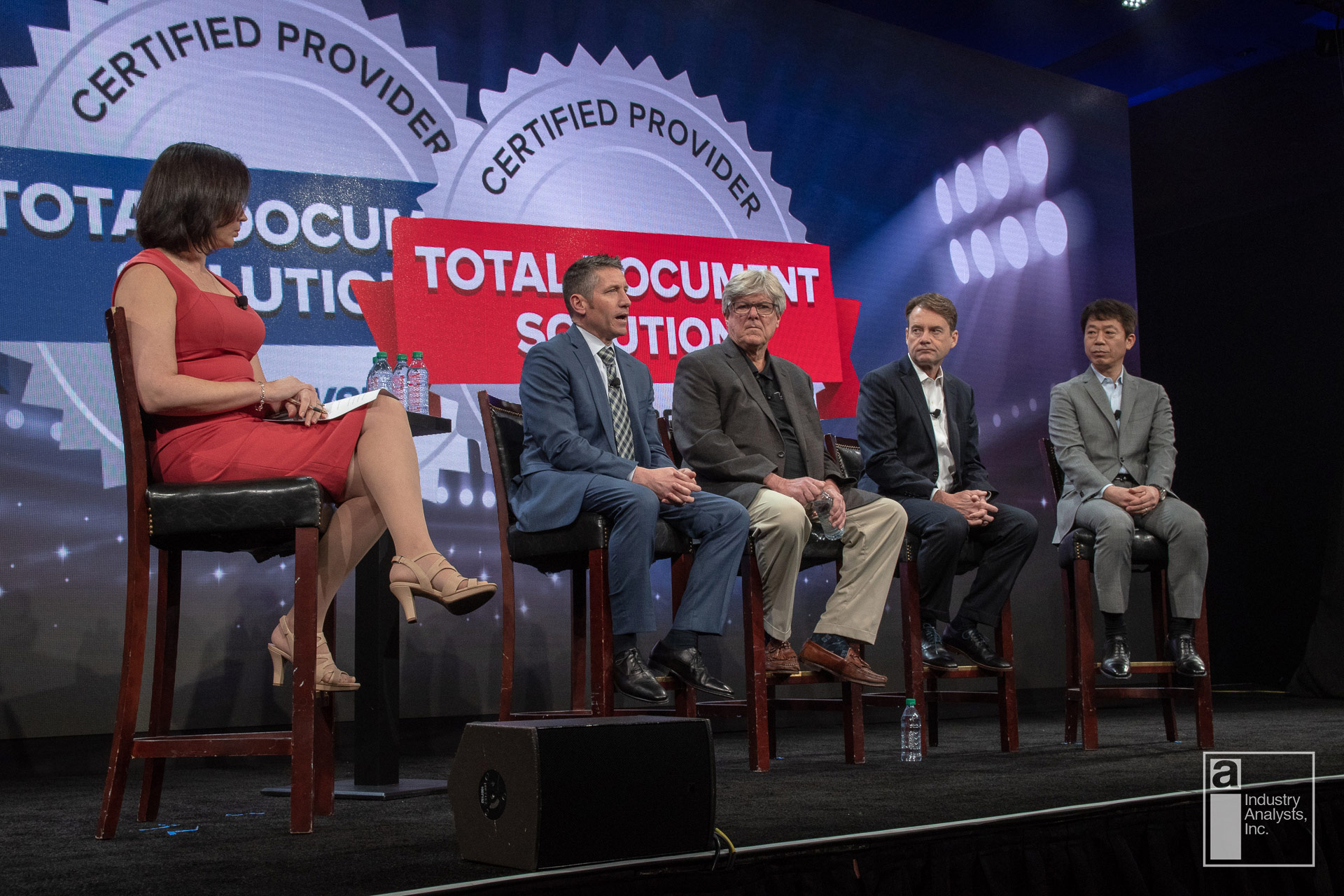 After the morning sessions, we were able to hit the product fair and the educational break-outs that Kyocera had made available to their dealers. The show floor was built with a wide open layout, allowing visitors to almost see from one side of the room to the other. There were three things that were at the top of my list to check out on that floor; the TASKalfa Pro 15000c, the TASKalfa 13600 series and the new TASKalfa 9002, which was launched in March. 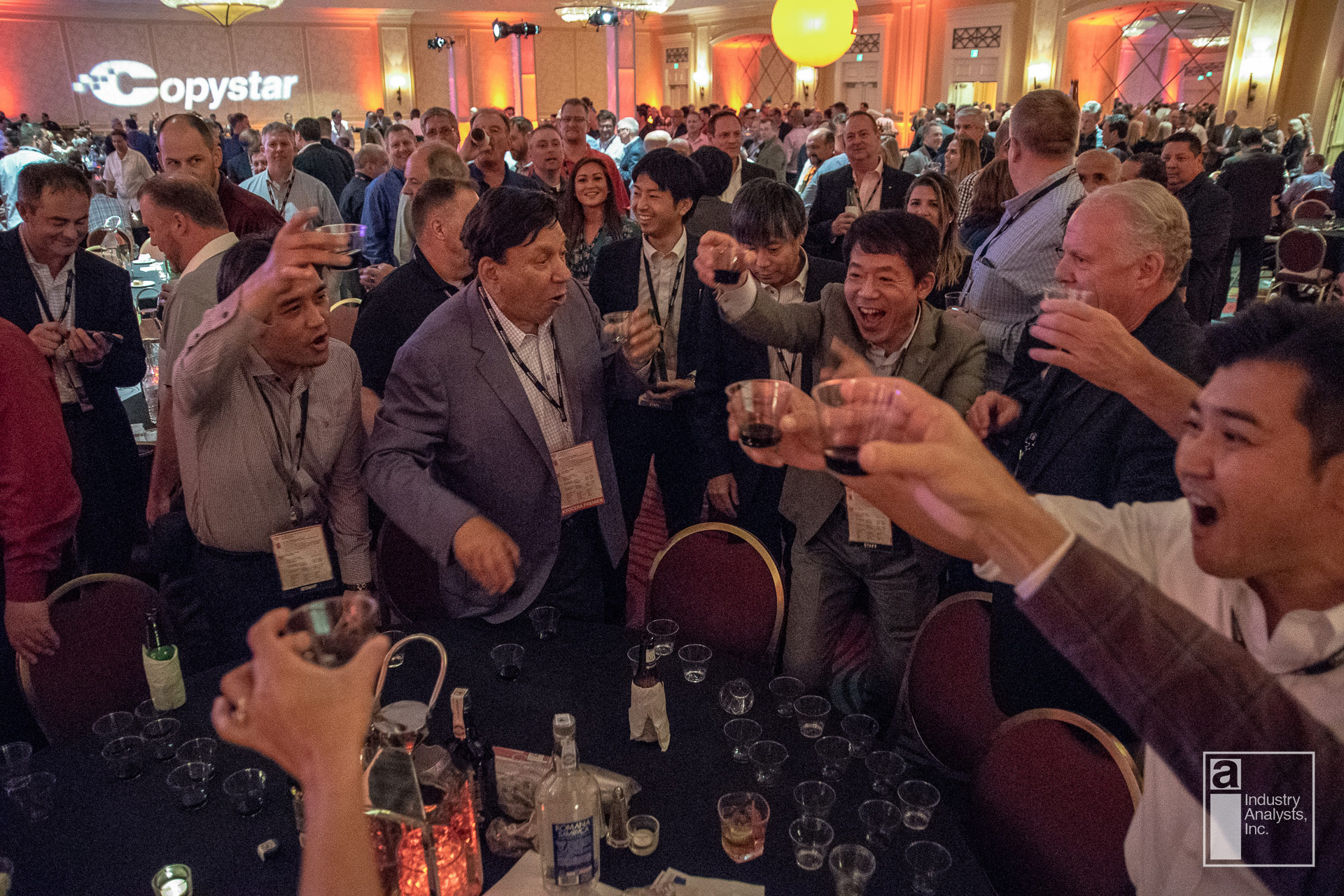 Dealers made a B-line straight for the Pro 15000c, which was set up in its own room, directly in the middle back wall of the show. The room had several rows of seating where dealers sat through presentations showcasing the new device. Throughout most of the event, you couldn’t get near this room and there was a line of people continually waiting for the next show. In fact, people were surrounding the room, looking in through the windows just to catch a glimpse. I don’t ever remember such a buzz around any Kyocera product at past shows. Not even close.

Click here to see all event photos and videos!

You may not know this, but Kyocera has been developing inkjet technology for years. They’re a major manufacturer of inkjet heads that are used by many competitors. The TASKalfa Pro 15000c is their first foray into the production inkjet market and dealers were thrilled. While this is a big jump from the office products Kyocera and Copystar dealers have made a living from since day one, dealers liked that this is unique. There’s not a lot of competition in the niche areas they’re going after, at least when compared to office print and they’re extremely excited to pick up this product. Even smaller dealers were very interested. At the moment, Kyocera has no plans to bring inkjet down to the office.

Moving on to the monochrome production hardware, the TASKalfa 13600 series gives Kyocera dealers the ability to compete in light production, an area they have been shut out from since the analog days. I would have thought this display area would have the same level of excitement around it as the inkjet, but that was not the case. The Pro 15000c was clearly the showstopper. Still, these new 90, 111 and 136 PPM monochrome devices will open doors for dealers who may not have a second line that includes production and they fill a major gap in their portfolio, one that likely shut them out with Enterprise customers that have CRDs or production print requirements. 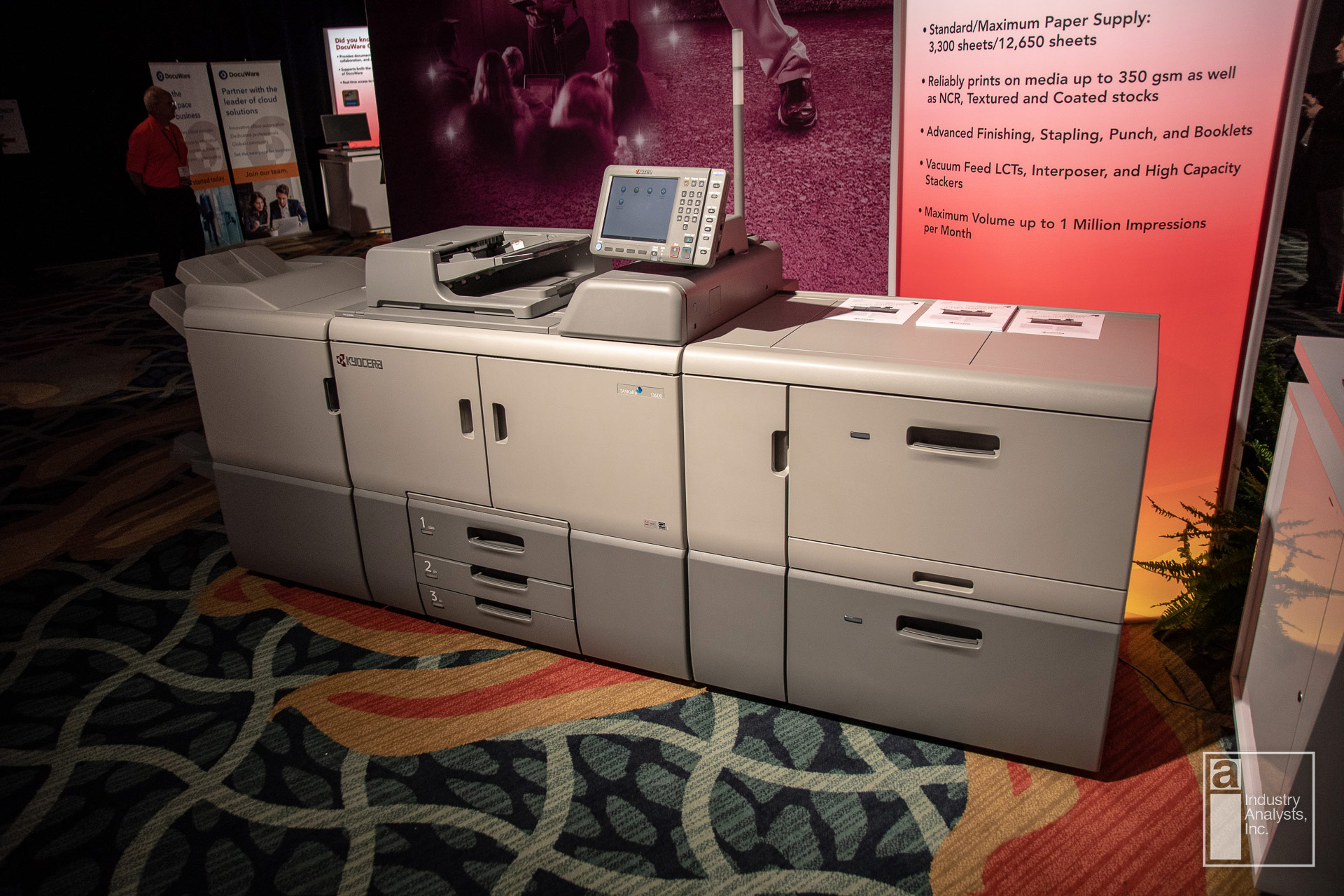 While it may not have had the same level of attention as the Kyocera developed inkjet, these three new products will be critical for many dealers going forward. This is one area I’ve picked on Kyocera for years, especially in our roundtable discussions with Kyocera executives. These new devices are a smart move and while many may pick on Kyocera for going to an outside company for the hardware, I think it was better to test the waters with a sourced product offering before committing to the development of an entire (expensive) product line. The TASKalfa 9002, launched last month also provides a higher end MFP, bridging the gap between higher speed MFPs and the light production 13600 series.

Kyocera also announced TDS 2.0. TDS stands for Total Document Solutions and includes assessments that tie into workflow, some developed by Kyocera, some coming from partner companies. The big news in the new 2.0 version is the integration with DataBank and Hyland software, which brings turnkey ECM into the offering.

The day ended with a great party, highlighted by a wicked air guitar from Mr. Ikeda. You know the crowd is having fun when the band is taking pictures of the people watching them! Attendees had an absolute blast, dancing the night away and then moving to the bar for late night fun. Believe it or not, I went to bed fairly early as the next morning we had our press/analyst walkthrough at 8 AM. Here is my only complaint about this meeting! Not only was this walk through too early (I need my beauty sleep), but it was also too late in the event. I’d prefer to get this information at the beginning of the show so I knew what I was looking at when I went through the room later. Not a big deal, just giving Kyocera notes for the next show. 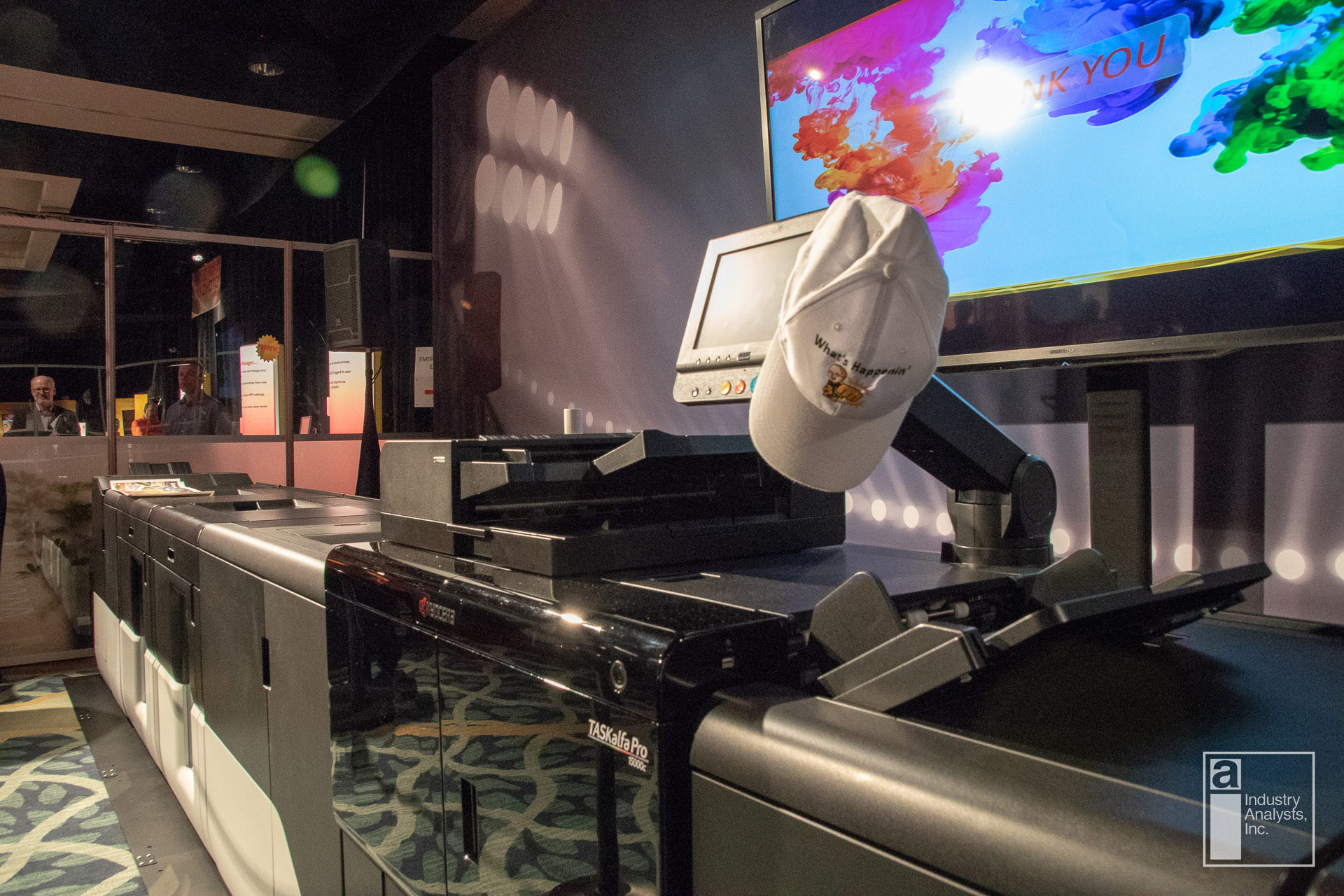 After the walk through, we were treated to a sit down with key Kyocera executives. I love these sessions as we get to have candid conversations with the people that make the decisions. Lots of great discussion on the go-to-market strategies around the Pro 15000c, TDS 2.0, what Kyocera is doing to improve those flat numbers and more. The executives were very open with us during this meeting. 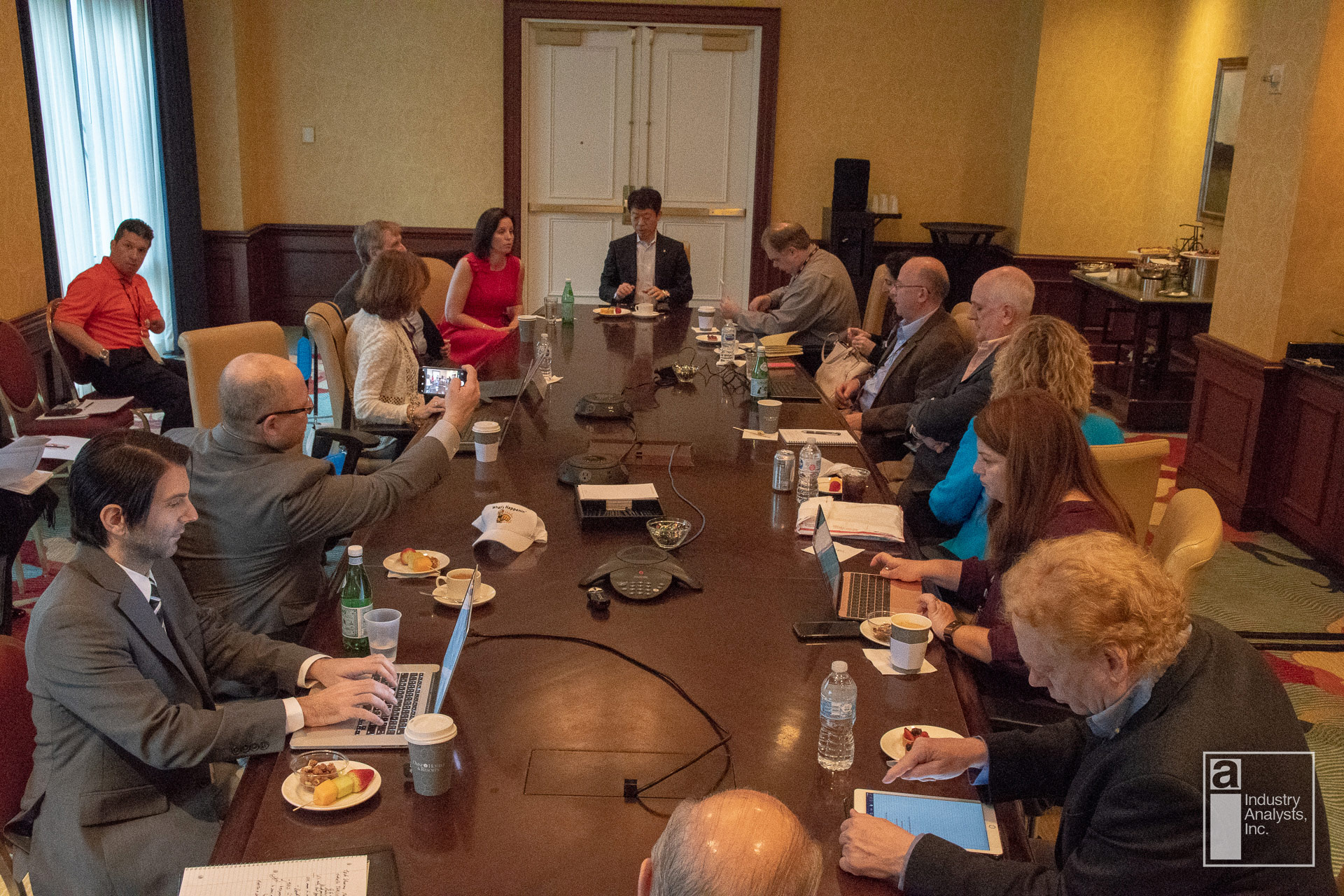 In all, this was a statement event for Kyocera. They have (finally) entered new markets they had traditionally said they didn’t need. You might say they’re late. They are. But, better late than never. I didn’t hear one dealer complaining about how long it took Kyocera to come around and offer these new products. Everyone I spoke to about it was thrilled and I had that conversation many times during the course of the show.

Kyocera has a lot of work to do to roll these production devices out, both toner and inkjet. They are completely different animals than most of their dealers are used to selling and there will be a serious commitment from them both financially and with respect to training. Kyocera will need to continue staffing up in order to provide dealers with the support they will need to get this program off the ground and they have already started. They will also need to fill in the back end finishing capabilities of these products, both inline and offline. I’m told they’re already looking into ore options, although there are currently no plans for more inline accessories at the moment.

It was a great couple of days and I appreciate Kyocera including me in what I believe was their most significant meeting they’ve held since I’ve been covering them. Congratulations to Kyocera for a nice show with some real meat behind it.

Photos and Videos from Kyocera Innovate 2018

What’s Happenin’ in the Office Equipment Industry? A Review of 2021 and thoughts on 2022

IBPI’s New Website. Let’s Dealers Search for Products and Services Unlike Any Other

TOP SOFTWARE ARTICLES OF 2021 (By Brand)