By Andy Slawetsky – I was in Tampa this week so I stopped in for a meeting and tour of What’s Happenin’ Report sponsor Dex Imaging!

Dan Doyle, Jr. was walking in as I arrived and was already on the phone. After a quick hello and some appreciation for my shirt (I was wearing a Bucs FitzMagic jersey under my blazer for that night’s MNF game), he brought me upstairs to see the boss, his dad, Dan Doyle, Sr. 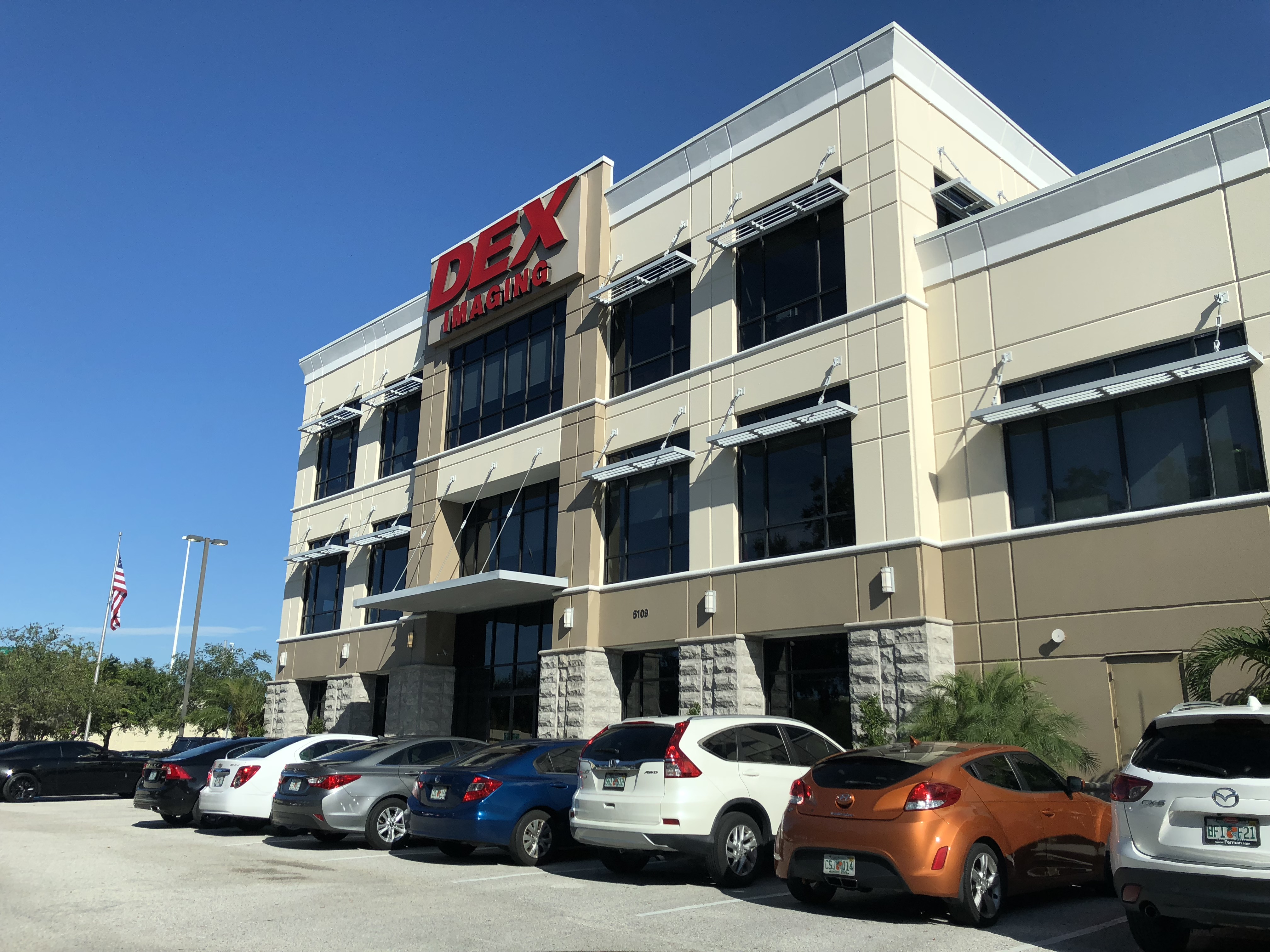 Sr. is a legend in this industry, famously building up Danka in the 1990s and turning it into almost a $4 billion dollar operation. Now, he and his son Jr. seem to be doing it again.

I chatted with Sr. in his office for a bit until Jr. had taken care of a few things. I love how their offices were set up, with each opening into a shared conference room, on the other side of which was the other office. So their offices literally face each other with a giant table in the middle. It was very cool! 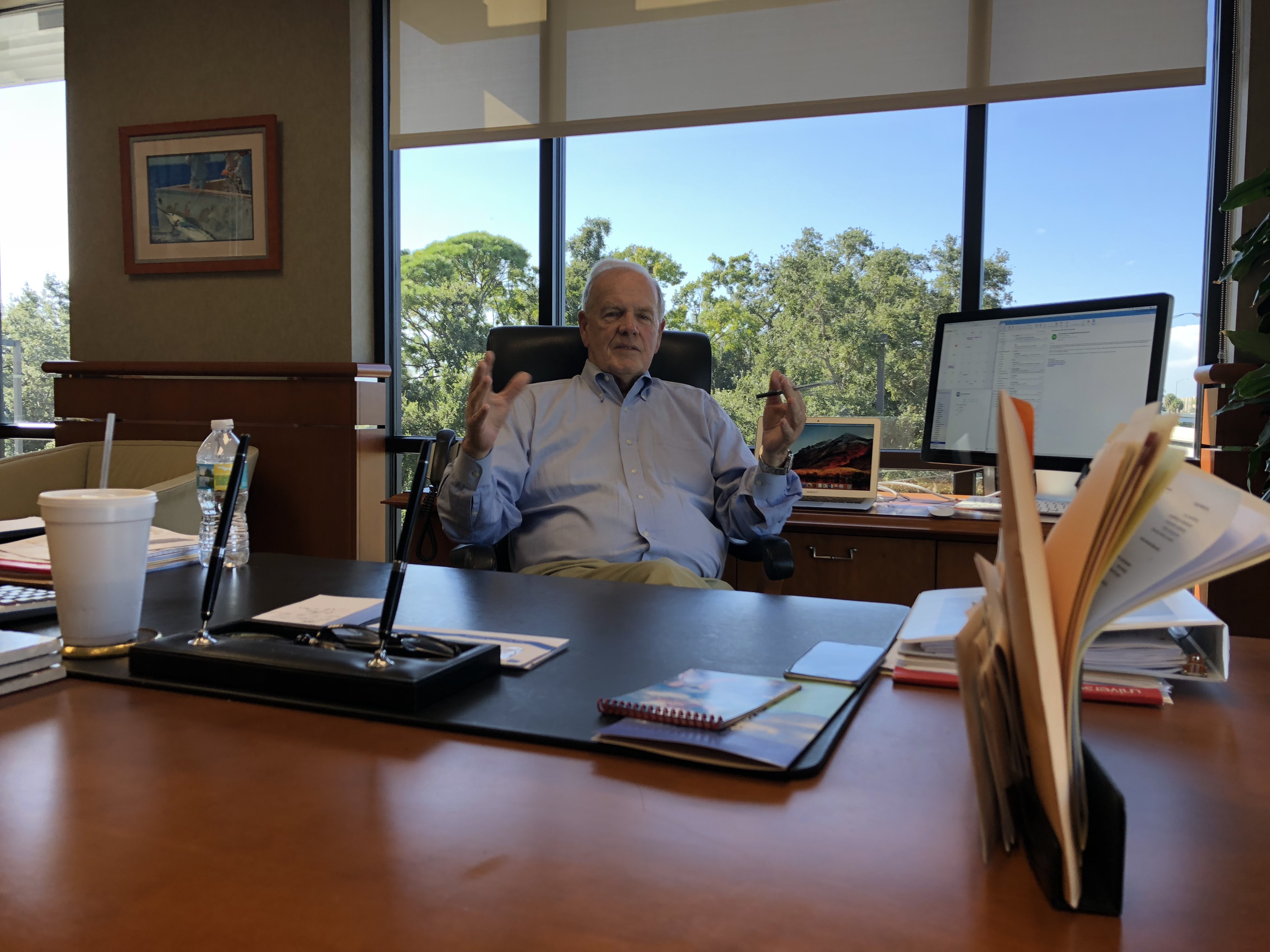 Dex Imaging opened their doors on Valentine’s Day, Feb. 14, 2002. They moved into this building and surrounding buildings, which they own, beginning in 2006. This massive operation is the heart of the Dex organization that now has over 38 locations as far north as Maryland.

Click here to see all my pics from my visit to DEX!

After a short chat in the company coffee shop with Jr., Sr. and Paul Natale, Sr. took me on a tour of the campus. Incidentally, the coffee shop offers employees free coffee and if you make it there early enough, bagels, pastries and other treats. Jr. told me that his people would go down the street each morning to the local Starbucks for their caffeine fix. Although it was close by, it would take employees a half hour or more, eating into the day and their productivity. So he decided to build a coffee shop and give it away for free. The result? People are at their desks earlier and go off campus less frequently. 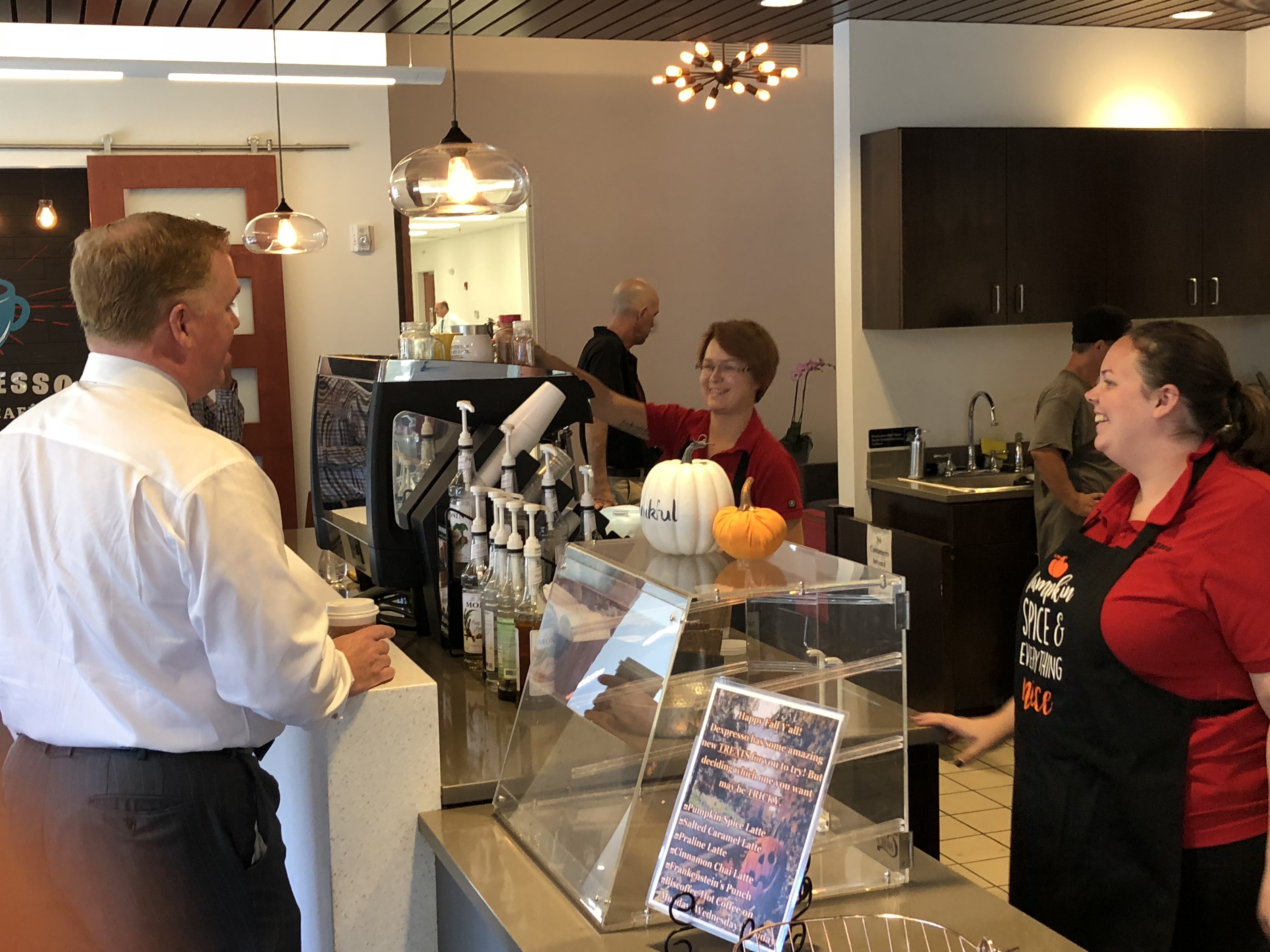 With over 400 people at this location, this programs adds up to a pretty big expense, especially after you consider it’s staffed by several people on the Dex payroll. But, the boost in productivity and employee tenure from little things like this is what help to make Dex a special place. Apparently the turnover at Dex is extremely low, even for sales reps, something that seams almost impossible for a copier dealer. “If they get past 90 days, they don’t leave,” said Sr. 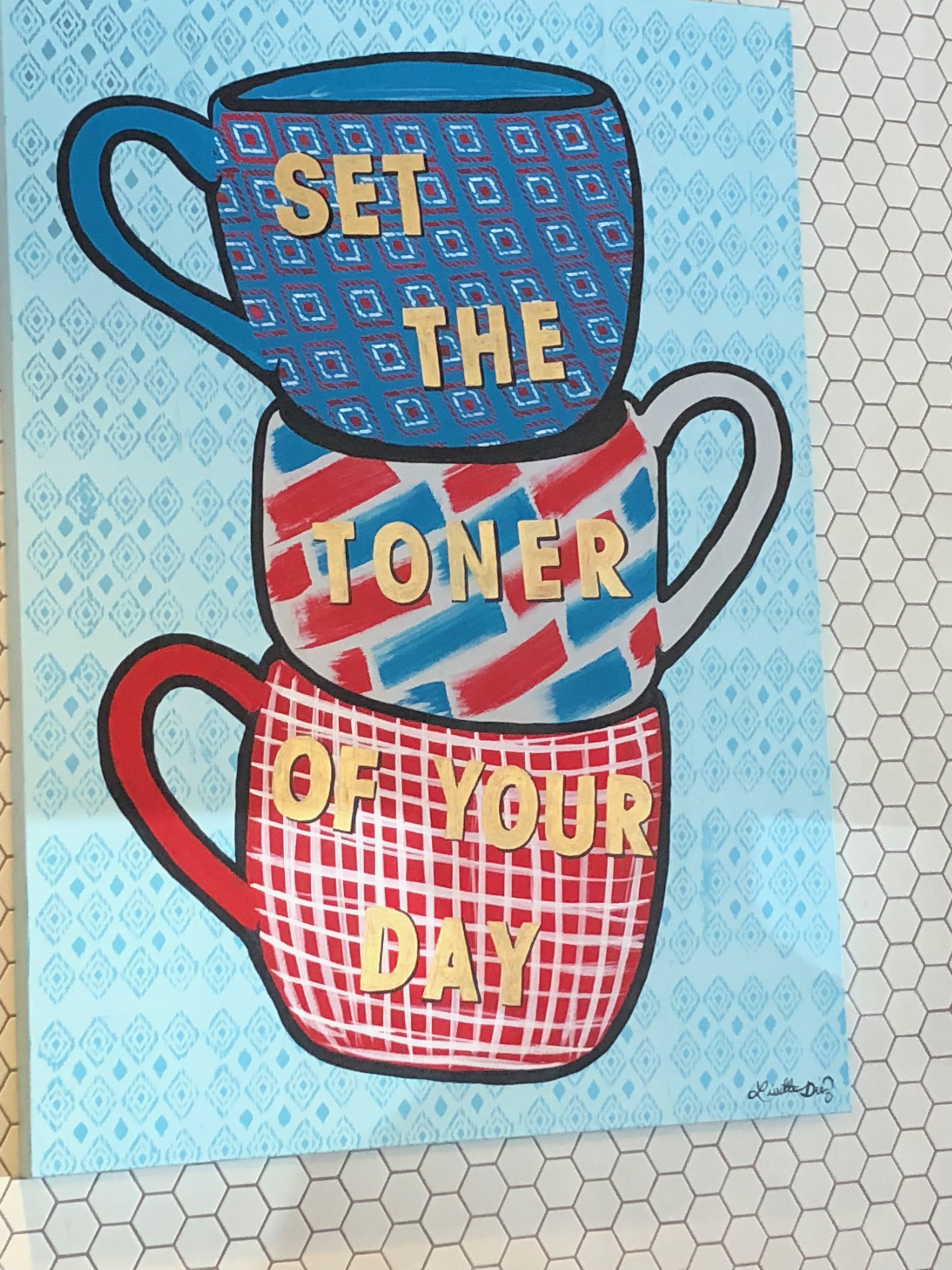 After some time in the coffee shop, Sr. took me to some of the other buildings. The first stop was their toner plant, where they build their own cartridges. This was a business Dex bought a few years ago and it’s primarily used for MPS contracts. When you lose to Dex in MPS because they beat you on price, this is one of the reasons why.

I walked through several warehouses including some where they received and stored machines as well as others where they built them and got them ready to ship. This is a big operation and I don’t think I have been in a dealer warehouse with that much gear in it before. Amazing. 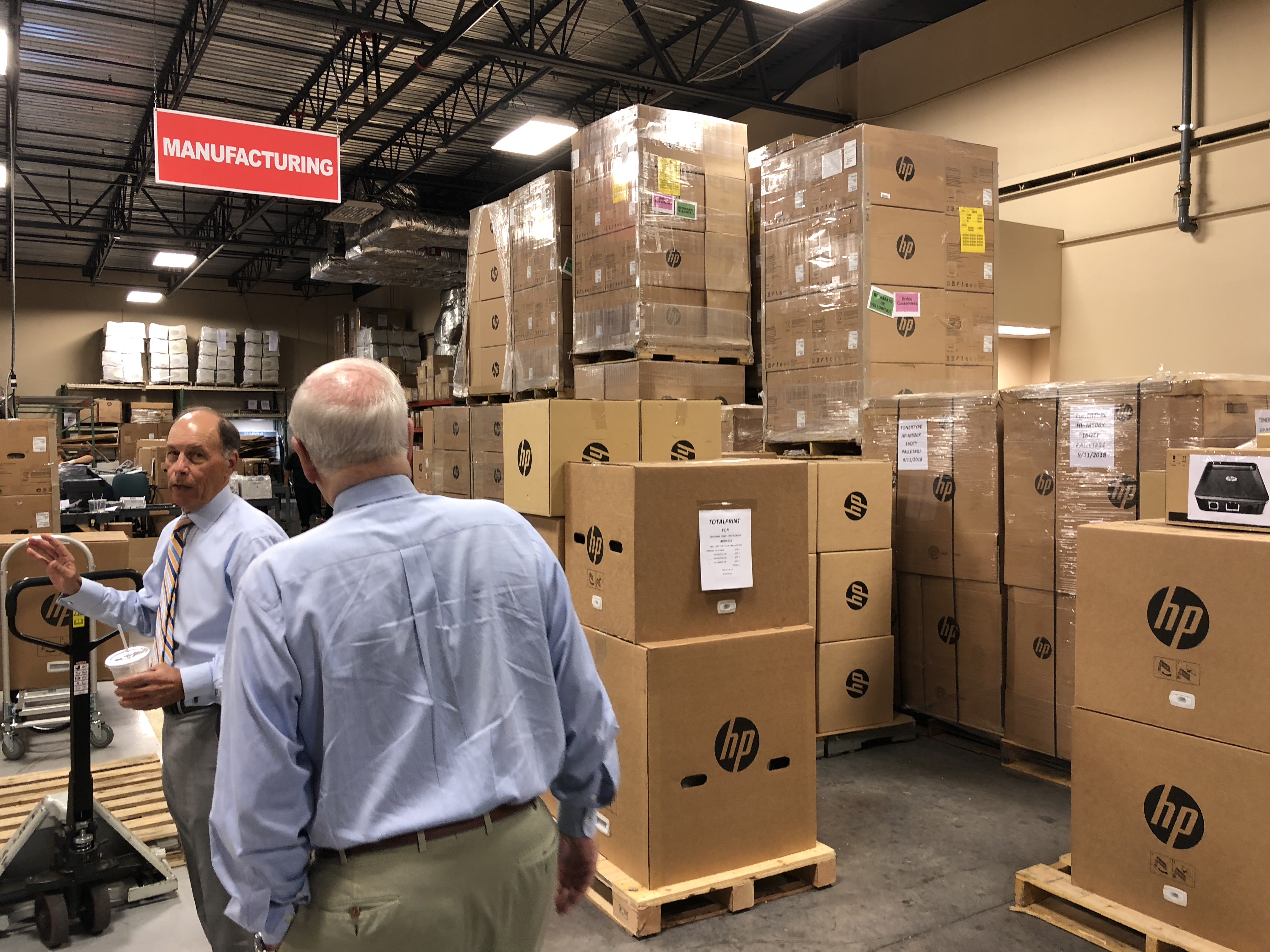 Senior then took me to another area where they had training facilities built for their four full-time, dedicated trainers. Dex is set to train new hires, sales reps, technicians, managers and anyone who comes through their doors with a variety of programs designed to help them learn and fit into the culture and do their job the “Dex way.”

Many of these training sessions end with a test or evaluation and Sr. told me you get two chances to get a 90% or better on some of these technician tests. If you don’t score high enough on your second test, “good luck with your next career, whatever it may be.” I saw a whole table full of Dex developed manuals for different positions within the organization, all created by Dex trainers. 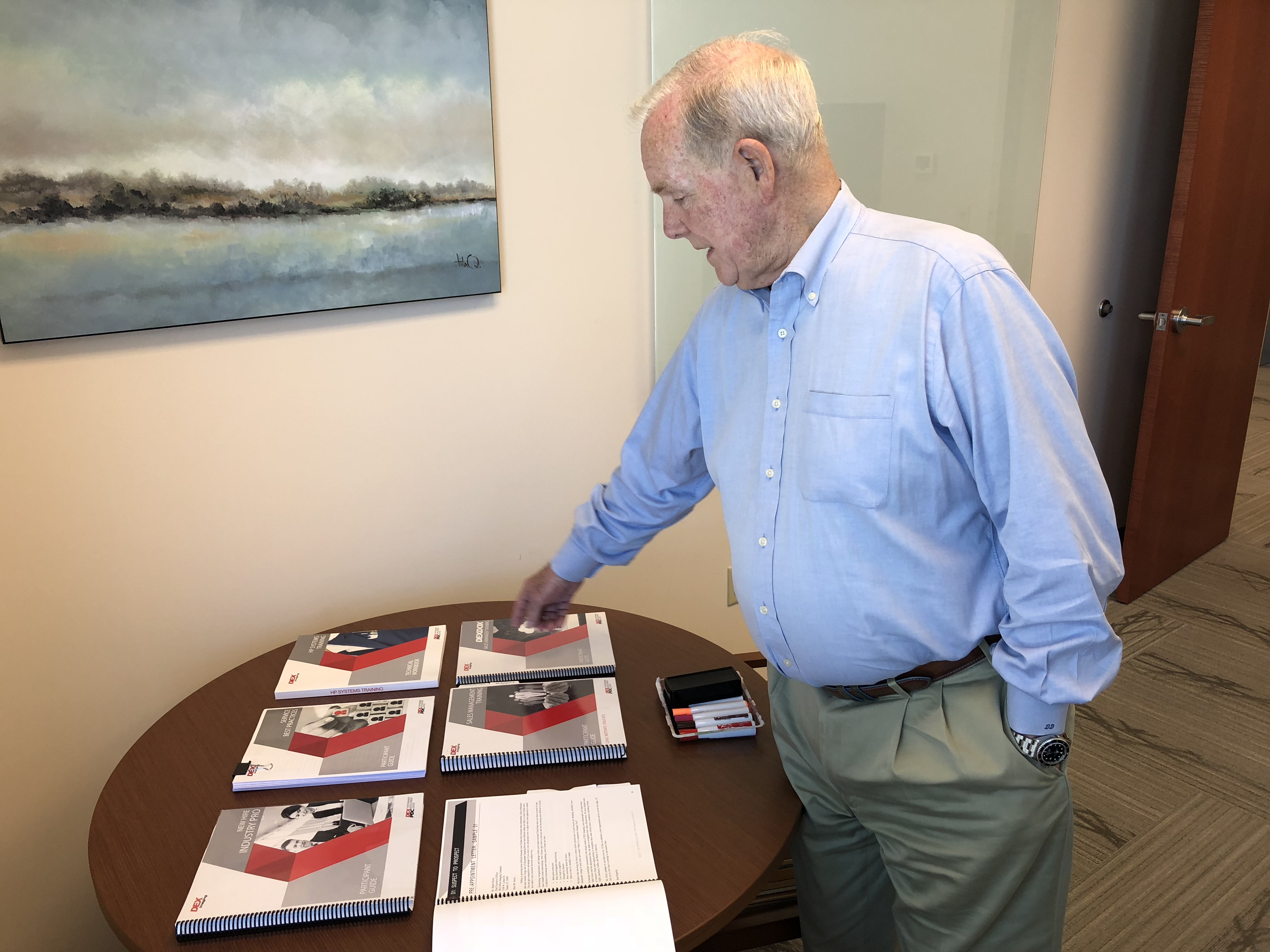 In another area, Paul and Sr. showed me some hardware they had built and patented. The small device plugs into he back of the MFP and grabs all the print volume off of the devices on the network, as well as service codes. This allows Dex to grab monthly page volumes – alleviating the customers of the chore. It also helps their techs know what the problem is before they get to a service call. In some cases it’s possible that the tech will know about the problem before the customer. Again, this was a Dex developed product. While they could have gone to outside sources, they decided to make their own and keep the technology in house. The investment has most likely already paid for itself, possibly several times over by now. 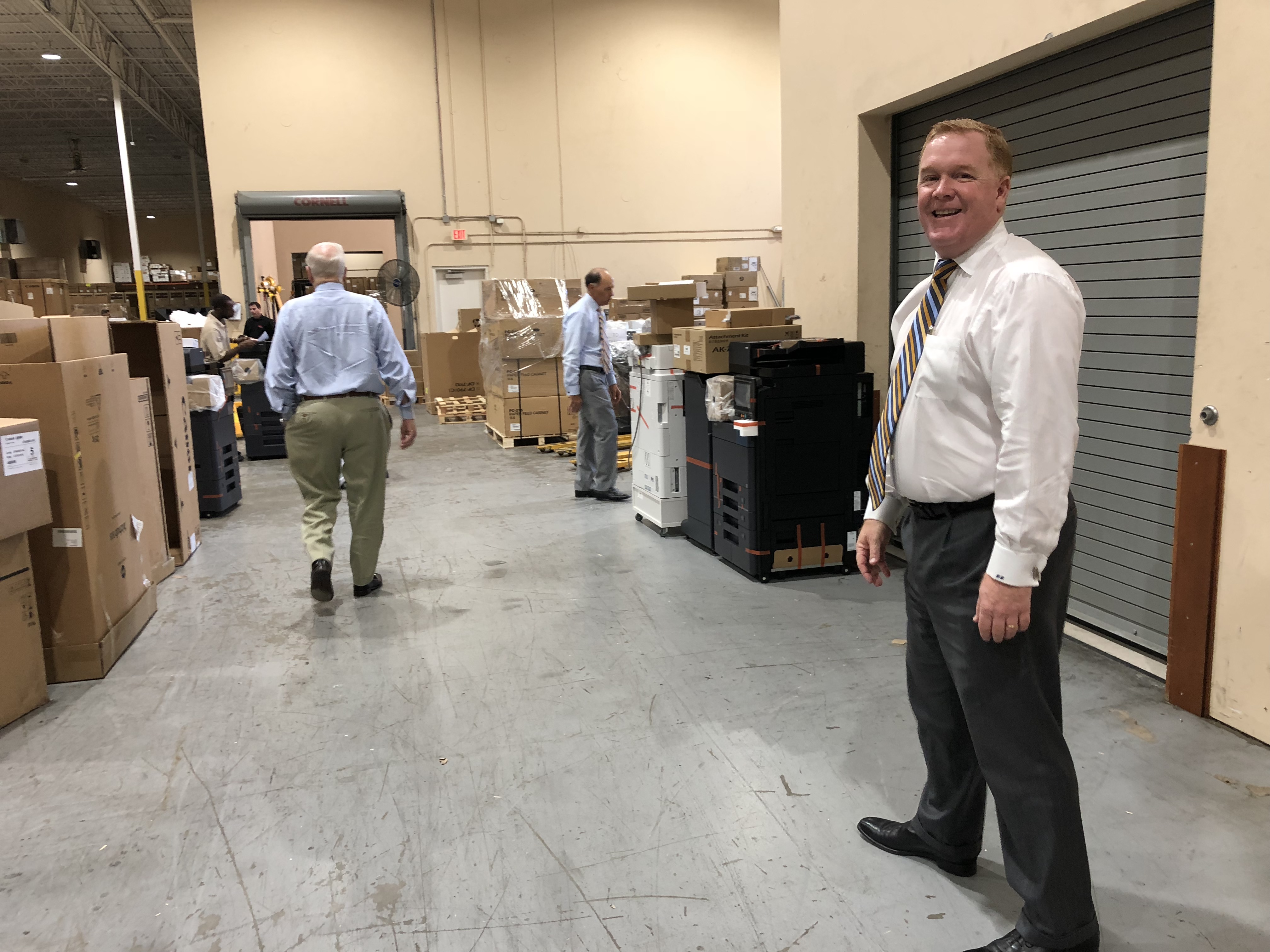 Dex is a fixture in the Tampa community. Indeed, while I’m writing this, I remember seeing their name all over the Rays/Yankees game I watched last night. They’re huge Lightning NHL partners as well. Dex also gives one third of all profits to charities, education and sports initiatives, which is incredible when you consider how much that must be. Andy, the sponsor a race car with their name on it. How cool is that? 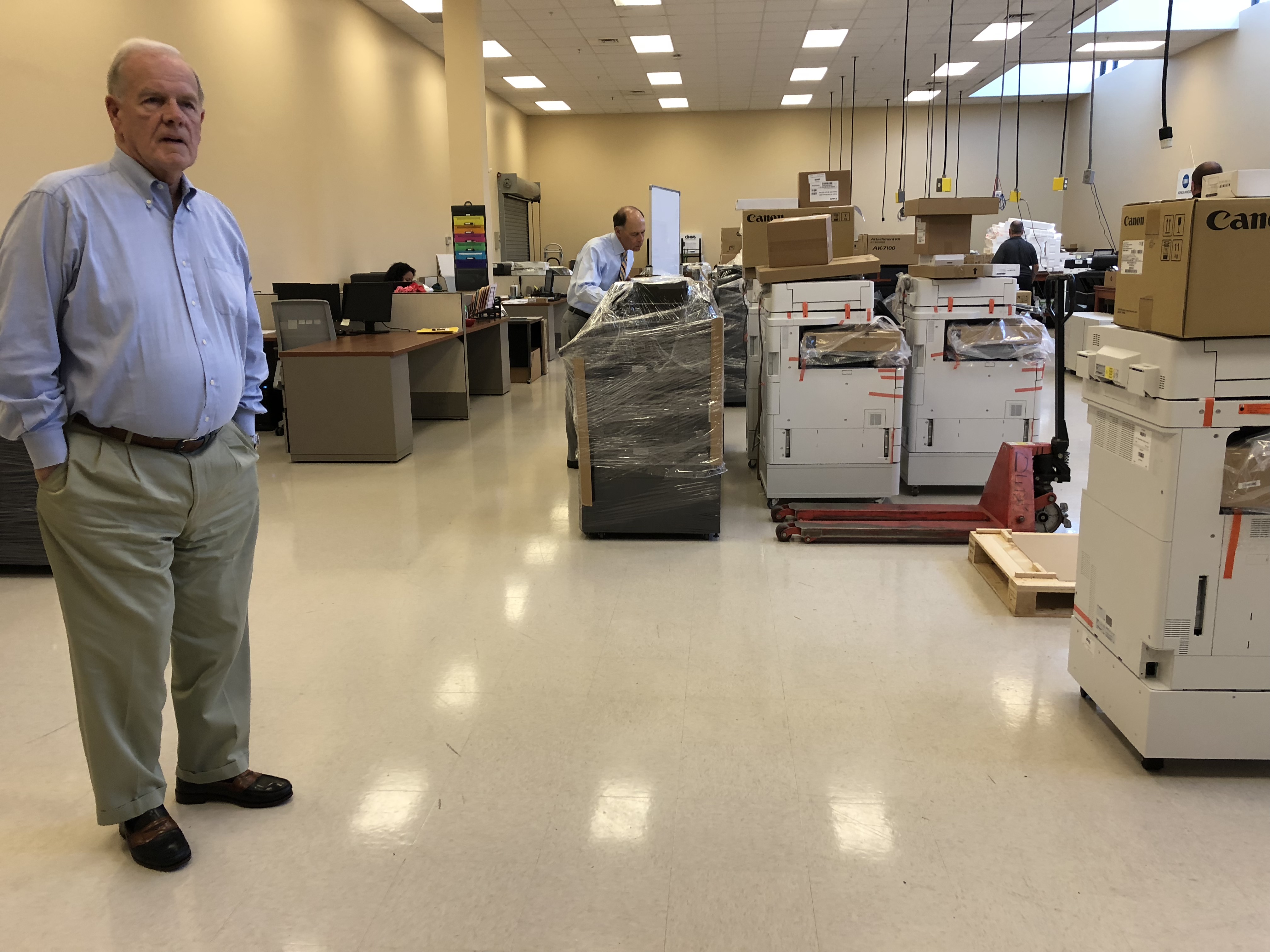 Dex is one of the top five biggest dealers in the US and maybe the world. They’re moving north and are now in Maryland and they’re expanding west too. They are a special breed of dealer and they do things at another level. While most dealers rely on their manufacturer’s programs for everything from training to hotline support to products, Dex does it their own way. While OEMs and vendors offer automated meter counts, they built their own device to provide this to customers, rather than share their customer list with their partners. While OEMs offer training for reps and techs, Dex supplements that with Dex training, even providing their own homemade sales handbooks with questions their reps should ask customers, including responses tailored not to any specific brand, but to Dex. 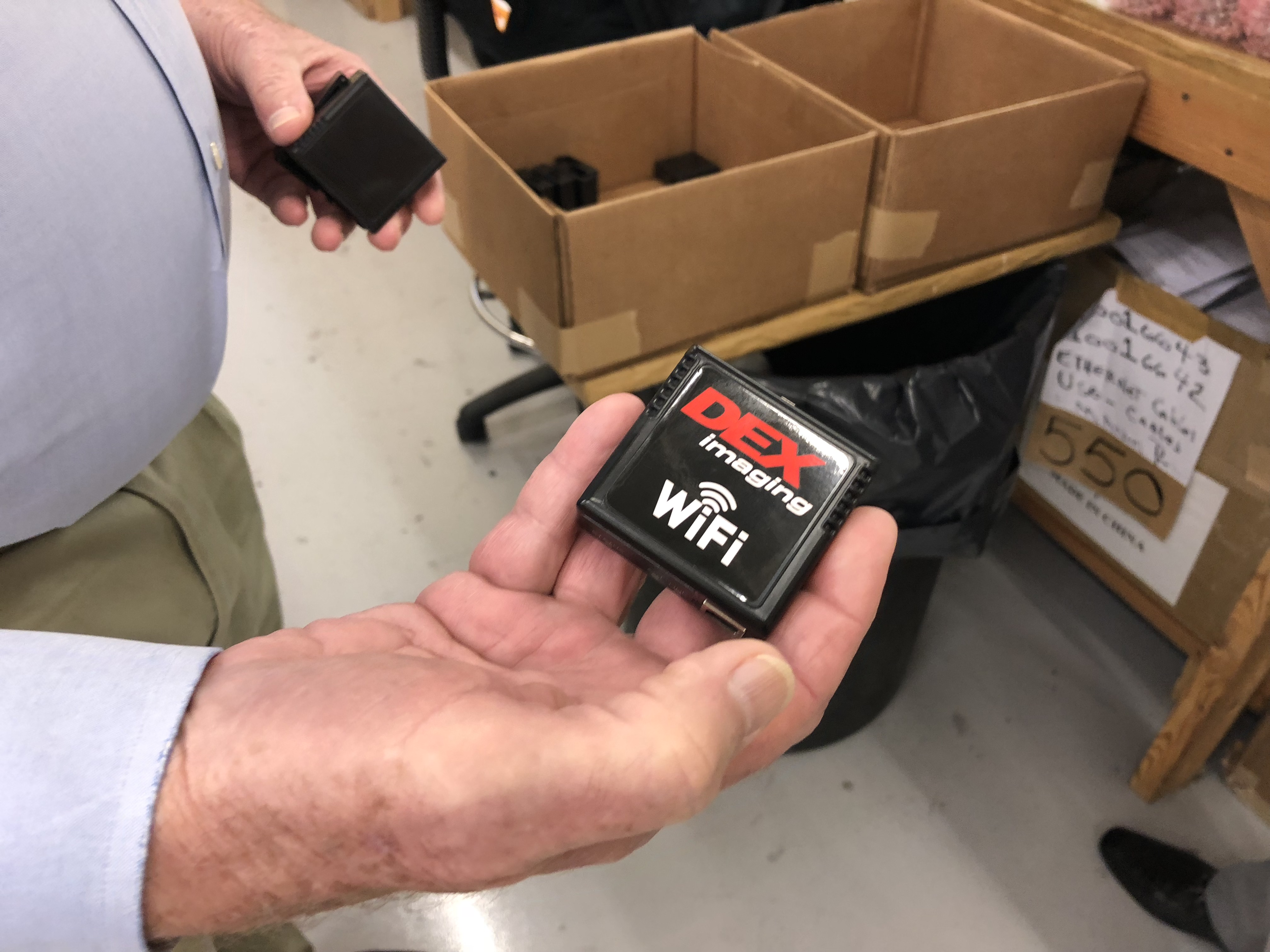 Sr. told me it’s not about the brand anymore. Dex is the brand. He said the customers don’t see Canon or Konica Minolta, they see Dex.

I appreciate the time these guys spent with me and I will surely take them up on the lunch I could not do on this trip when I’m back in town. Thanks to the Doyles for spending the morning with me and showing me around! Dex is one of the elite dealer brands in this industry and if you spend any time at their HQ, who will know why. 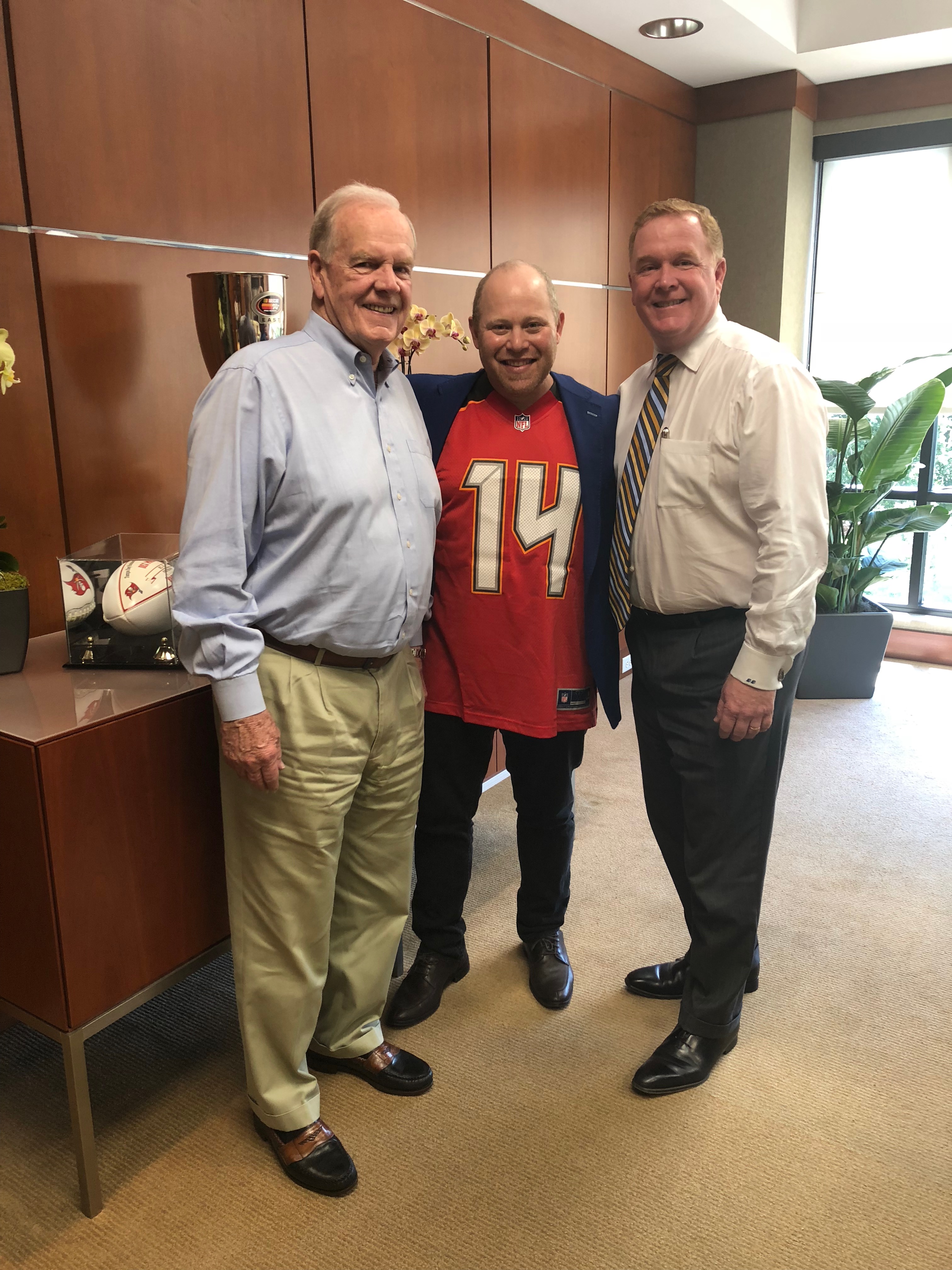