EDITED By Andy Slawetsky, Industry Analysts – Canon held their Media & Analyst Event in Boca FL February 11 – 12. Unlike past years, this year’s event was one day instead of two – quick and easy!

After a nice welcome dinner on arrival day, the event really began bright and early the next morning as Sam Yoshida took the stage after some initial welcoming comments by Eric Hawkinson. Sam is now EVP & GM of Business Information Communications Group (BICG), Canon U.S.A., and Vice Chairman of Canon Solutions America. I’ve known Sam for many years, meeting him in the mid 1990s when I first started here at IA.

According to Sam, Canon had a pretty good year for the most part. The camera group has some issues, but the office equipment side has shown steady growth. Sam joked that they were boring, but in this case, slow, steady “boring” growth was better than some of the alternatives.Canon’s dealer program once again grew, making it the seventh consecutive year it has done so. Canon Solutions America, Canon U.S.A.’s wholly owned subsidiary, set a new record for revenue and BICG was up 1%.

Digging deeper, Sam told us commercial print (inkjet) was up 12%, display graphic systems were up 21% and large format (CAD) was up 12%.

Canon has been very aggressive in the video security market for a few years now and we got a nice overview of one of their more recent acquisitions – BriefCam, a video surveillance solution that uses data and AI to do some truly futuristic analysis of video. It was both incredible and somewhat terrifying at the same time. 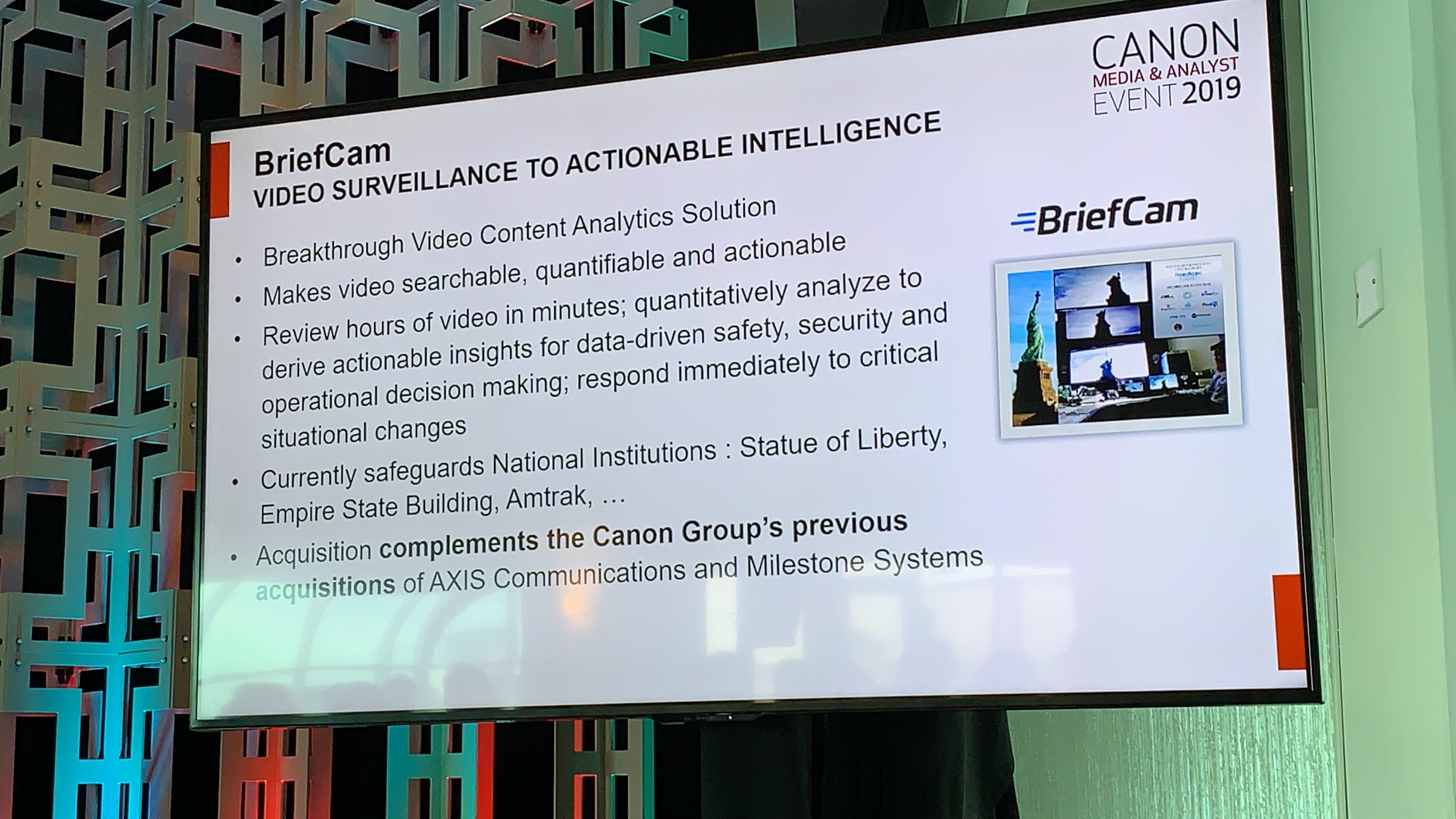 Pete then discussed Canon Solutions America’s 5 Pillar Security Strategy, which they have divided into ; Device, Print, Document, Information,and Cyber Security. Canon Solutions America will also offer or currently offers online security training and concierge service through partner Barracuda. Add this to the things Canon is doing with BriefCam and surveillance and you can see Canon is in the process of putting together a pretty serious security program.

Click here to see all event photos and videos! 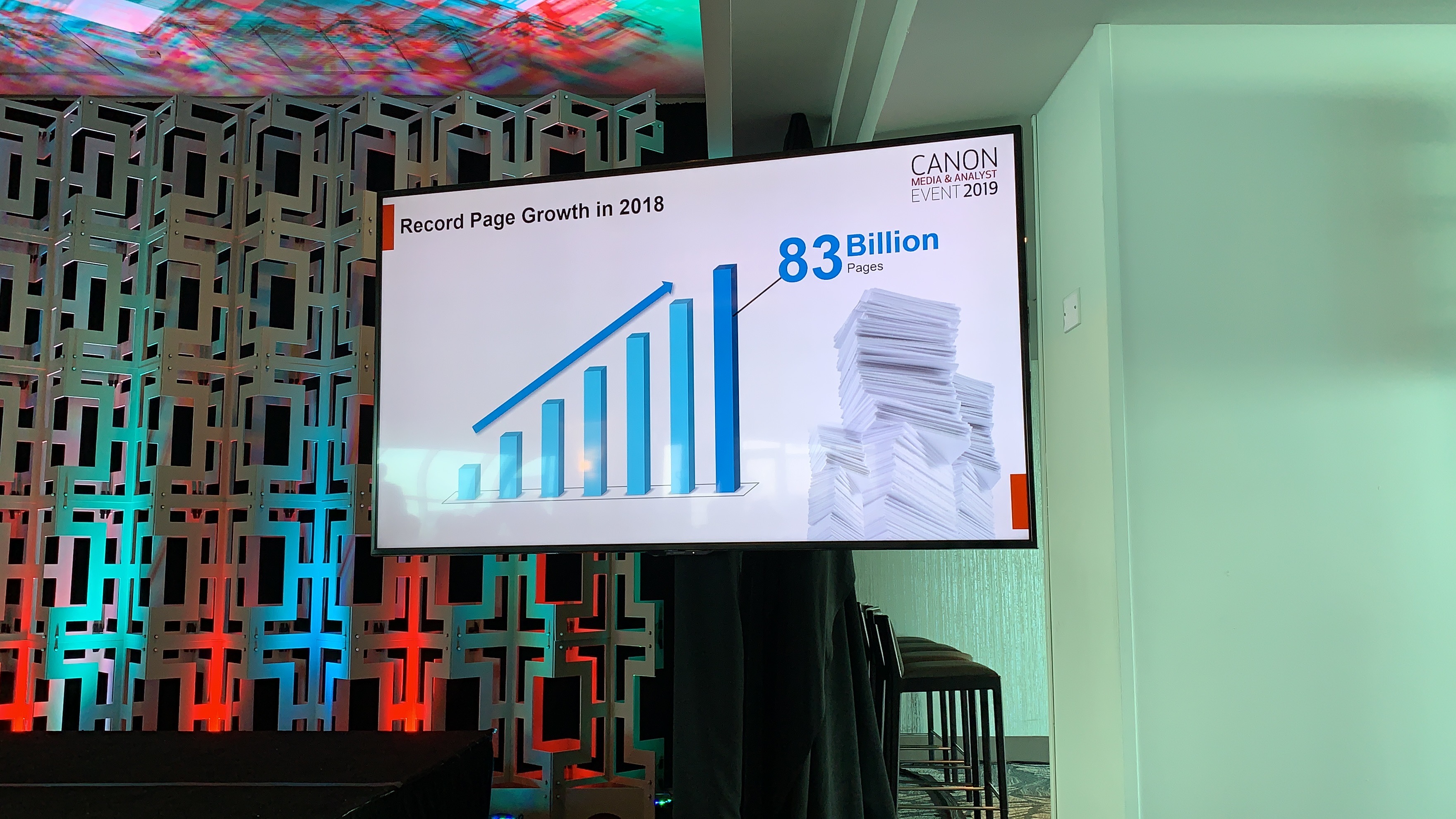 Canon’s VPi300 inkjet set a record last year as Francis told us how one customer printed 10-million pages in a single month on the press. Let that sink in for a minute. 10-million pages in one month on one machine. They’ve also had “incredible success” with their ProStream 1000, calling it the most successful new product introduction in PPS history.

You can see Francis’ presentation in the video below.

Rob Reddy, SVP of Large Format Solutions for Canon Solutions America, came next with an update on Canon and the aqueous inkjet market where Canon showed modest growth in a market somewhat owned by HP, except for the “IJ 8-12 Color Units” where Canon was #1 for the second straight year. Rob went on to say that Canon also gained share in flatbed printing through sales of their Arizona flatbed printers. 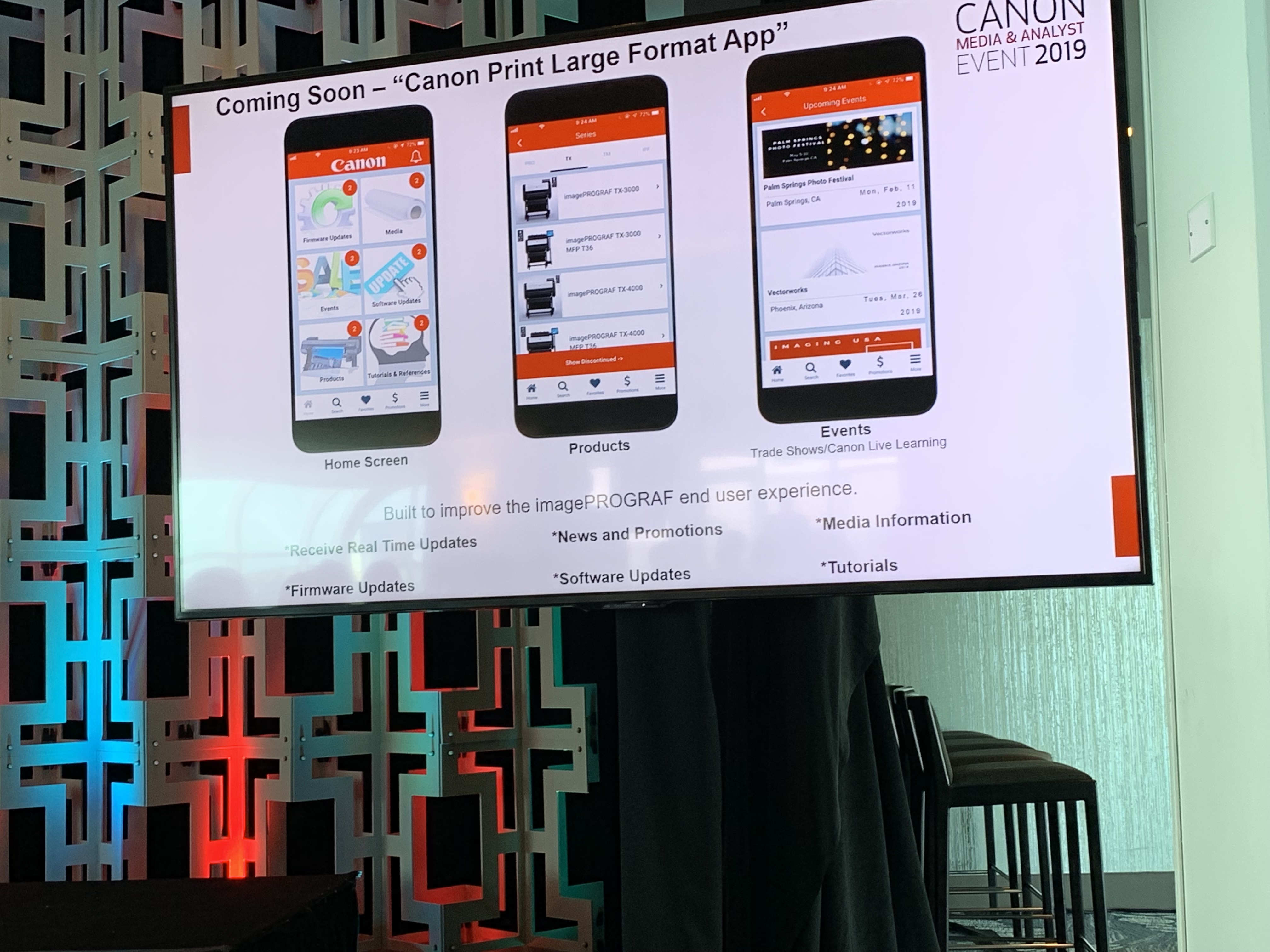 Just before we broke for lunch, Mason Olds, SVP GM of Sales BICG took the stage to review some numbers before bringing on his panel guest, Greg Martin from Ray Morgan/UBEO. It was a great panel and you can watch below.

Fresh on the heels of the Dex/Staples acquisition, Mason began his session discussing the rampant acquisition trend we’re all experiencing at the moment and who some of the major players are. He also discussed the impending decline of pages and diversification for dealers, something several brands have been preaching lately.

The event officially ended with a nice lunch after Mason and Greg’s chat, followed by some one on one sessions, which are always great. 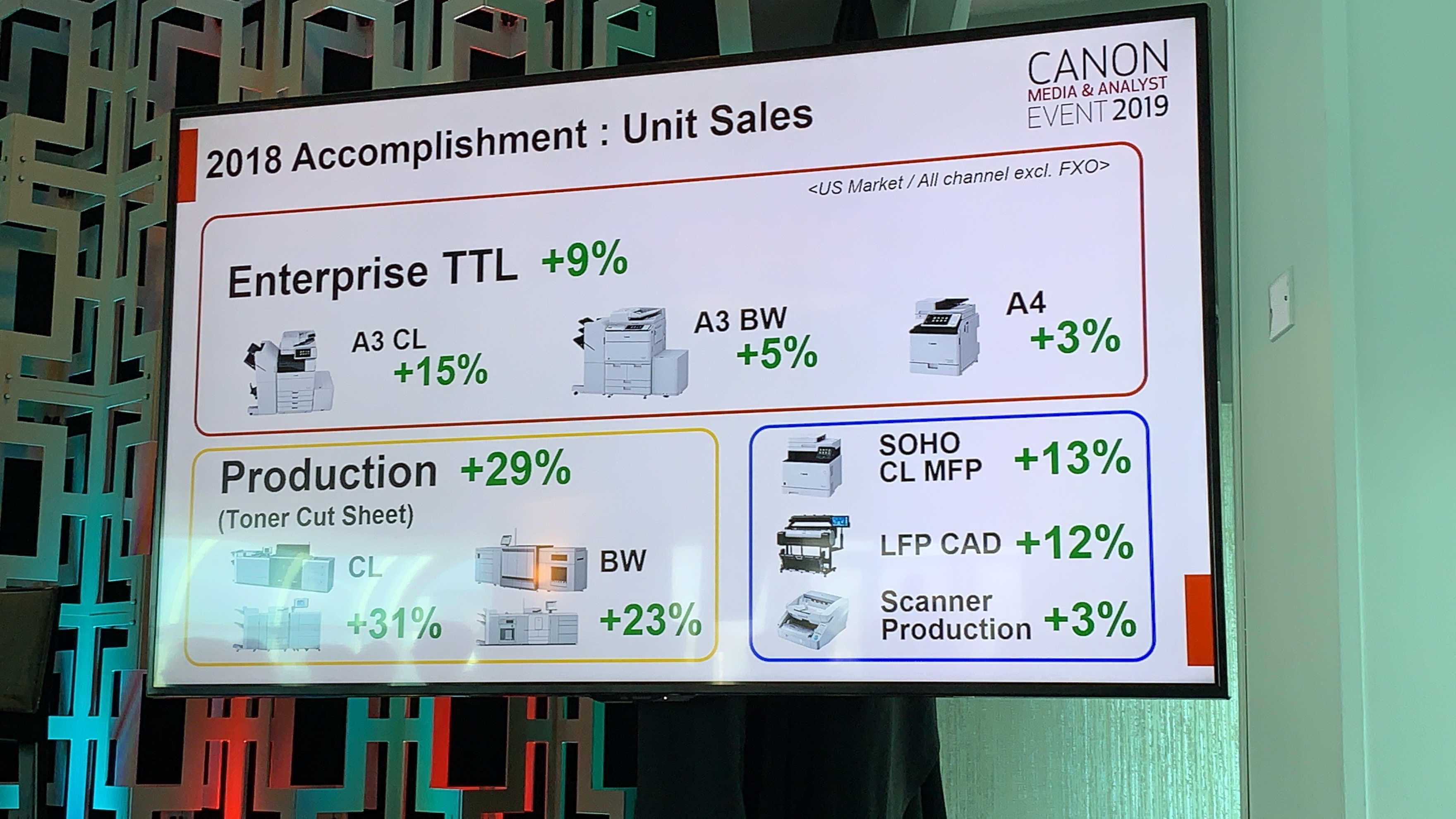 When I initially saw this event had been shortened by a day, I felt for my west coast analyst buddies who had to come all that way for just a few hours. But in the end, it was worth it, at least for me. Canon had a decent amount of news and strategy review as well as numbers they shared that gave me plenty to write about. And the access to senior leadership is always greatly appreciated. 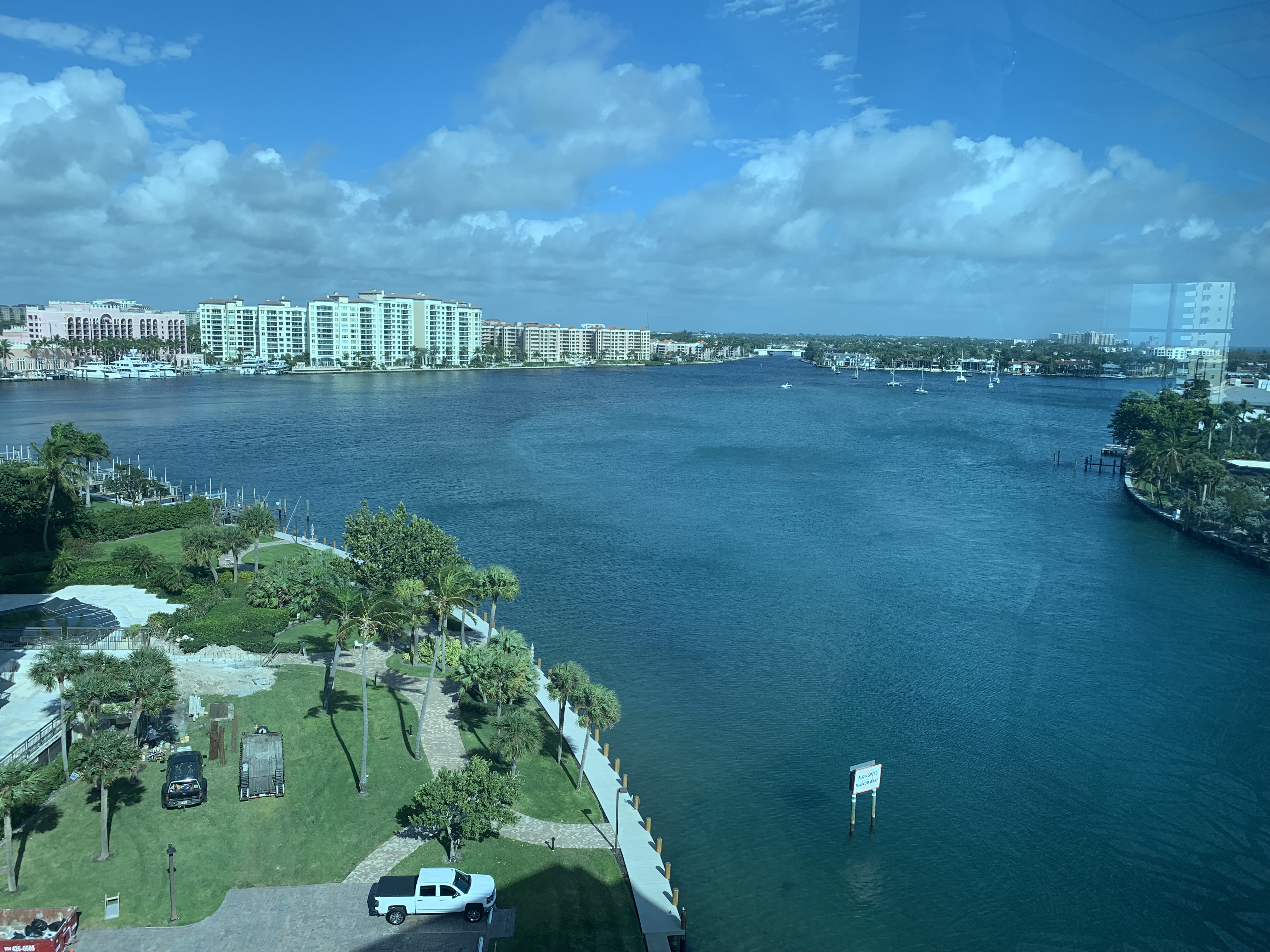 As a perennial top 5 global patent holder, Canon’s investment in their technology surely has a lot to do with their long-term success. Seven straight years of dealer growth, increased sales and revenue in nearly all areas and expansion into other lucrative markets are just some of the reasons Canon is still one of the elite companies in this space.