By JB “Papa” Brostrom – Papa was up but taking his time in Oklahoma City.  Paco and Papa had set a 7:30 am departure with 7:15 meet at bike time.  As Papa looked out the window he could see Paco was at the bike, packed, coffee in hand and ready to go.  Just at that time Papa’s phone buzzed and it was a text from Paco… “I am ready to roll” with a thumbs up emoji.  Papa will be right down…. It is 6:30am.

We gathered early at the bikes.  Paco presented Papa with a danish and time to have a sip of coffee.  Paco was in a hurry.  The cloud cover we were experiencing means menacing weather in Phoenix… In OKC it is just another day.  Paco asked if we would get wet.  Papa showed him the weather radar.  Moisture clear all day and cloud clear by the time we hit the Texas border.

First oder of business is to mount up and get out of town still on interstate 40 west.  Once out of the city scrum we will stop for fuel and a bio break.  We were able to stop about 20 miles our and accomplish both tasks.

The air is a bit chilly so sleeves are required.  This is a welcomed change to the past week of riding.  Cool riding and no sun.  Just wide open beautifully paved roads.  Our next stop will be shortly after we cross into Texas.  50 or so miles down the road we pulled out to pass and realized the truck we were about to pass was moving over as well.  Construction ahead and the right lane was closed. The speed slowed and required a downshift.  We made our way through the construction zone and as soon as the lanes opened and traffic moved to the right Papa revved up to highway speed and hit 6th gear and settled into cruising more.  A quick micro check to be sure Paco’s headlight was behind and nothing… only trucks and cars… no Paco!!! As per protocol this initiates a pull off to the right shoulder with flashers on.  First a waiting game and then at the time Papa reached for the phone he recognized the Screaming Eagle Headlight in the distance but approaching quickly.  Paco soon came to a strip beside Papa to explain his transmission shifting locked and he was unable to get out of 3rd gear.  Long story short… if it doesn’t fit, force it!  After using some knee and hip grease (as opposed to elbow grease) Paco was able to jam through the greats and now the bike was performing as expected.  Paco would keep an eye on this as 100 miles ahead is the Amarillo  Texas Harley dealer… just in case.

Papa and Paco are now seeing the end of clouds and the reemergence of a cloudless sky.  As we crosse into Texas with warm weather and clear skies we experience wind.  It is only windy in Texas when the sun is out.  At times Paco and Papa were in a NASCAR left hand turn just to keep moving forward in a straight line.Winds out of the south.  Given the abundance of wind farms it seems this is the Texas normal.  Papa and Paco approached Amarillo and slowed to city posted speed limits.  No distress signal from Paco so Papa proceeded through Amarillo, then past the planted Cadillacs and once out of the Amarillo scrum we stopped again for fuel.

This part of Texas and then eastern New Mexico is sparsely populated.  Thus fuel stops are  at a premium. At this stop we actually had to wait 10 minutes for a pump to open.  Paco and Papa actually shared the pump to expedite the process.  They cared some jersey and hydrated before heading west again. (lots of sharing)

The next treat on interstate 40 west of Amarillo is the hamburger and ribeyes.  The feed lot adjacent the south border of Interstate 40 is packed literally with millions of future burgers and steaks.  They literally stand there and eat.  Then they dispose of their waste so they can eat again.  This is not a statement of carnivore-ism or vegetarian-ism or vegan-ism.  It is a comment of improper planning.  The prevailing winds are from the south.  The feed lot is on the south of the interstate.  Therefore logic dictates the perfume that wafts across the interstate is less than pleasant.  Had the planners placed the feed lot just several hundred feet to the north there may be more meat eaters in this world!

Both Paco and Papa are having an inner dialog about the need now for sleeves.  The weather is heating up but at highway speed there is a definite swamp cooler effect in the dry of west Texas and New Mexico. Sleeves stay on.  Next stop, Santa Rosa for fuel.  The trek to Santa Rosa is a fight through the wind and a fight to not stop early to doff the long sleeves.  Both battles were won.  The pair rolled into Santa Rosa for a longer fuel and bio stop.  More hydration as well.  Waiting behind the two at the pump was another biker.  This gent was on his way to Pueblo Colorado this evening to see his daughter.  Poking out from his jacket was his passenger who’s name Papa cannot remember but did notice the dog wasn’t human.  Apparently this pair have 90,000 miles together.  Papa and Paco pulled away from the fuel pumps to park and take a quick rest.  Pueblo dud and his companion are a carnival act of sorts.  This dog, I will call him Gavin because he is long, has a pointy nose and is not very bright.  Gavin doesn’t stand next to his buddy, rather Gavin stands on his shoulders.  Expertly walking from left shoulder to right shoulder over the top of this dude’s head.  Gavin acted more like a parrot.  Prophetic isn’t it?

Gavin’s dude came back over to chat and chat and chat and chat…  One 30 second conversation (not exaggerating) included his going to college in Minnesota (Mankato State) at the same time his daughter was there, his first-step- nephew once removed who was a former Minnesota Viking and was caught cheating on his newscaster girlfriend, and his past job at the Hanford facility in Tri Cities  Washington.  Perhaps the isotopes in Hanford have done some damage.  This pleasant and talkative fellow fired up and left.  Just before Papa and Paco departed and fine fit gent approached us from his truck.  He is hauling a harley.  This gent is active Army with a couple of tours in the sand box.  He wanted to toss some grief to Navy Paco but really wanted to express his gratitude for what we are doing and how we are honoring his brethren.  So the dude how has bee in harms way is thanking Papa and Paco.  We set him straight and thanked him for his service.  Another of so many great exchanges the Pack has every time we are out.

Next stop our hotel in Albuquerque.  Sleeves are off.  Paco later commented that the lack of bulk actually lessened the effect of the wind.  Paco still has much to learn.  There is a reason Papa wears tight fitting shirts… and it is not to accentuate his 6 pack.

The wind is still constant but Papa and Paco begins to experience the effect of elevation.  Albuquerque is at 7000 ft above sea level.  If nothing else changes just the rise in elevation will drop the temps 30 degrees… and the sleeves are off.  Papa knows that if we soldier through the pay off is the west side of the mountain will be warm.  The east side approaching is down right cold even for an old Minnesota boy.

We approach Eubank Avenue exit where our hotel will just off the exit.  Pack members will remember this as our first RV campfire experience.  Along with Trash our party crasher.  He enlightened us that evening on his love of cats.

This year we are joined by at lest 3 other guests… it is empty!  Papa got to his room right away.  As mom and dad Papa, who reside in Albuquerque would be his private uber for a dinner visit at home… properly masked and social distanced for sure.  Papa insisted so his sister-in-law, Lady Di, doesn’t make him into a steer.

Paco was stranded at the front desk because the desk clerk continued to pine on and on about wanting a motorcycle.  Papa got into his uber and Paco went to join his scheduled conference call.

Upon his return, Papa delivered another of the elusive grey long necked goose as well as homemade BLT and homemade coleslaw.  After a brief greeting of mom and dad Papa the two riders sat back on the outdoor deck for a cocktail.  Paco usually does’t “eat” rather he picks.  This night he devoured with authority the BLT and coleslaw.  Mom and dad Papa’s efforts were rewarded! 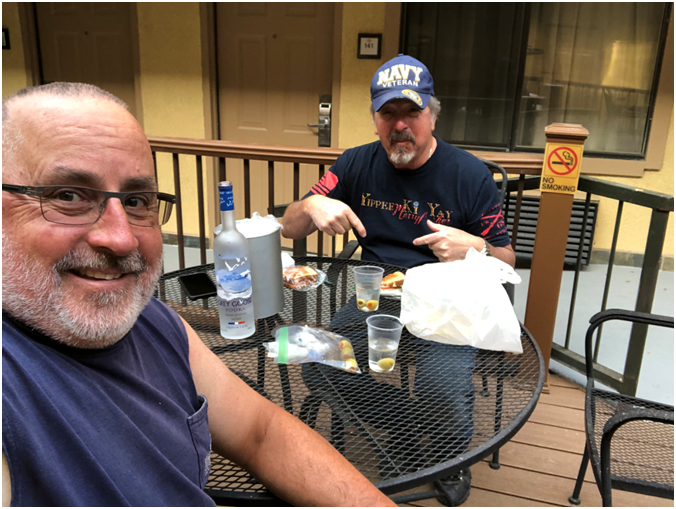 Tomorrow is our final leg of the journey.  It will be bitter sweet.  This FI ride taught is that what we do needs to continue.  We will be back in force next year.

On a side note.  FI is also the shortest prayer in the arsenal of a devout Jesuit.  What does FI stand for?  Two words and the last word is “it”.