By JB “Papa” Brostrom – In the shadow of Graceland.  Paco and Papa have an 8:30 arrival time at MCC to meet with Josh and Scot Berry and their team.  This is always a treat!  Preparing for the day we loaded the bikes, cleaned windscreens, wiped down bugs with the proper tools and accessories provide by Lone Star.  I am sure it wasn’t up to Lone Star’s standards but we did try.  We had a wonderful conversation with the staff.  They begin to remember us year after year.  It was time to mount up and ride the 12 minutes across east Memphis to MCC on Sumner Avenue.

As soon as we arrived we were greeted.  MCC is always on point.  We were ushered into the building and shown the way to the presentation room / dining room.  Immediately we noticed the effervescent attitudes and pressed white shirts donned with ties.  Ladies were neatly attired.  Always noticeable.  Also we noticed we were also greeted with a running PPT showing some pics from last year when we were in full force.  We were presented fresh coffee and soon arrived hot breakfast sandwiches.  The best way to get bikers back year after year is to feed them.  I would say it could be the same for a wayward husband but that could invoke gender inequity claims, so I won’t mention it.

There was lively discussions about the state of America and the world in this COVID environment.  Scot and Mike took turns enlightening the guest and gathering of MCC team members.  It was great conversation. 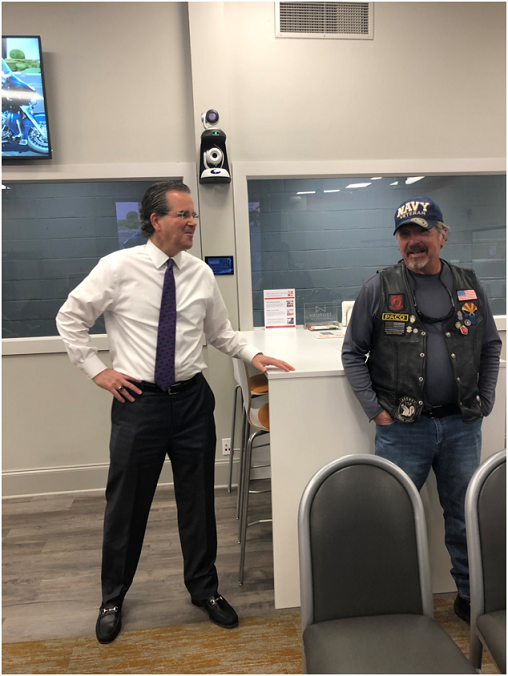 Scot and Josh then led Paco and Papa to what I will call the CSCC or Client Services Command Center.  (you can steal it Josh).  An entire wall, reminiscent military command and control or NASA was lit up with an array of pertinent real-time information. 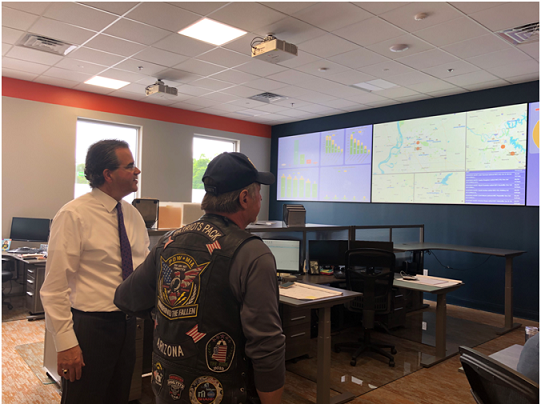 There was a very sharp and disciplined crew following up and acting upon the information at hand.  Josh and Scot can come into this room and with a simple glance can get a pulse on their entire empire.  Then with remote drill down capability they can get some detail on the anomalies.  All of this powered by FORZA and the creative mind of the Berrys.  Well done.  Dom’s mom, you need to see this in acton. 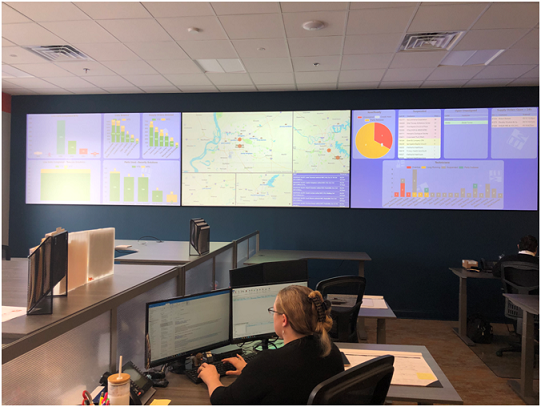 Soon we were to be off… but not.  The difficult decision was made to head back west due to Arthur… right after Paco’s 10:00 am ten minutes conference call.  At 11:00 Papa started being indiscreet about saddling up.  And we were sent off by Josh, Scot and their film crew.  Always a class act.

We jumped on interstate 40 around the north of Memphis and soon headed due west across the mighty Mississippi.  As soon as we crossed the river we could see the traffic trouble we experienced last evening had not abated. It was horrible. The air was cool and westbound traffic was heavy but moving.  This made for uncomfortable sleeveless riding. Papa pull off into a truck napping ground to allow Paco to sweater up. Quickly we were back on interstate 40 westbound with almost a full take of gas.  We had filled up just prior to arriving at MCC.  Then, as soon as we crossed the interstate 55 interchange our world changed.  We were among two full lanes of 18 wheel semi tractor trailers as thick as a freight train traveling at 75 miles per hour.  In Papa’s entire travel career he has never seen this amount of truck traffic two lanes wide at such a rate of speed… and it stayed this way until Little Rock two hours later! 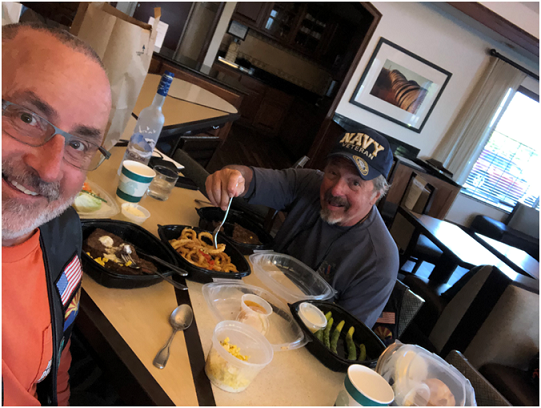 We had fuel enough west of Little Rock before stopping.  Two things happened rather simultaneously.  Papa was noticing the complete dearth of trucks.  The road was wide open in both lanes and no trucks.  It was like a Steven King novel.  They were just gone.  We can only surmise they all proceeded on interstate 30 toward Dallas.  It was unnerving.  Also at this time Paco was waving the “need fuel” gesture.  Odd as Papa had 80 miles in reserve.  We pulled into the next available fuel stop and wondered by after all these days Paco had burned through fuel as a rate much higher than Papa.  Something to keep and eye on.  We blamed it on the wind and his faltering Screaming Chicken/eagle.  Gordito, the cam’ed 107 just simply out performs the screaming eagle.

Well it seems this next tank of fuel will be on a much more quiet road as we move from central Arkansas and cross into Oklahoma where we ill need fuel next.  The temps were rising but the ride was flawless across west Arkansas and into Oklahoma.  Clear skies and less wind as well as traffic.  We are making good time and soon we were pulling off to our scheduled Oklahoma fuel stop.  Slim pick’ins.  A ratty old convergence store in a small rural OK town.  Fuel pumps that literally only half worked.  Your choice of two version oof 87 octane fuel for 1.58/gallon… why not.  We took a break on this stop and hydrated, stretched and rested.  Next stop, Oklahoma City and our hotel for the night.  Oklahoma roads are on par with Texas.  We made good time cruising across eastern Oklahoma to OKC.  As we approach the city we can see large bombers (we presume) doing touch and gos at Tinker AFB.  As we rode past the north end of the runway, on our left, we could see to our right a converted 707 at about 200 ft elevation coming right at us less than 500 yards out… impressive.  COVID traffic causes rush hour to be pleasant in most cities.  We soon made it to the Homewood across the street from a harley dealership.

We checked in and invoked our new policy.  Do not go the room as this causes bed paralysis.  Instead, since there are only single digit rooms rented and the lobby is empty, we spread out, re-open Lone Star’s famed grey long necked goose and wait for door dash to deliver our Ribeyes, asparagus, corn, wedge salad and calamari for an appetizer.  We are roughing it.  Papa went to gather ice and some real glasses and real tableware.  Upon return Mrs. Paco was on speaker phone.  Mrs. Paco was in rare form citing direct and accurate quotes from the week’s blog postings.  We discussed her warm and maternal feelings toward Dom’s mom and her big brother.  It truly was a Norman Rockwell painted conversation.

We have an early start and a long day to Albuquerque tomorrow.  Papa needs to shut down the dinner and get to the blog.  We’ve know Rover of the Mars’ Rover Rover is unreasonable impatient with this blog.  What had happed is industry stalwarts Slaw and Dom’s mom have become increasingly impatient.  Papa needs to finish the day before he finishes the blog.  That long neck has a way of slowing down the memory recall needed to pen such notorious daily musings.

During another text communication during dinner a question was asked of us.  “what is our take on the ‘pulse’ of America as you drive through?”  Papa’s first reaction is this…”I feel the people we have  including industry people, and just plain folk from all of our stops, are of a collective mind.  Their pulse is racing.  Reminiscent of horses in the staring gates just prior to a race…. Let’s get this thing going again!!!  …or they have to pee.”

The Wilson Group Has a New CEO