All Texas all the time

By JB “Papa” Brostrom – Sunday started early… very early because we badass bikers never saw 9:15 the night before and nether sleep much more than 5 hours in a row.  Good news it allowed for some time to think about the day before.  It also allowed for a bit earlier start than anticipated.  Our departure began with an ominous “sign”.  As Papa donned his protective cover he noticed it didn’t fit as normal.  As he adjusted he grabbed at the strap only to notice someone had moved the strap to the left side… or… he had just placed his protective cover on backwards!  This was quickly remedied and we were off. 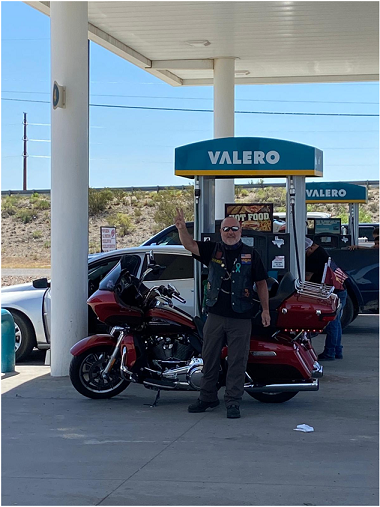 We begin the day with little fuel so we planned on stopping for fuel just as we got to the south edge of town.  We pulled in and filled up and properly hand sanitized before mounting up and heading on I10 East in a southerly manner where soon the posted speed limit will be 80.

Papa was looking forward to winding through the West Texas mountains.

Hey New Mexico!!  I know why your interstate 10 is a crumbling mess.  Seems Texas got your federal highway funds.  I10 is brand new concrete as smooth as glass for hundreds of miles.  Paco and Papa can make great time with cool morning sunshine, almost nil wind,  beautiful road, light traffic and the aggressive posted speed limit.  Our first stop is 160+ miles.  This will put at the first fuel stop after we leave interstate 10 and merge onto interstate 20.  Papa researched earlier in the morning to make sure there was a fuel stop shortly after our merge.  Using the built in harley davidson gps navigation Papa searched for the nearest fuel stop and Harley determined this was either 60 miles behind us or 70 miles in front of us.  We had 35 miles of fuel at best.

We brought down the speed a bit to conserve fuel but with a posted 80 it gets dangerous much lower than that.  The good news is that Google was dead-on accurate and harley navigation is outdated.  Disaster thwarted.

At this fuel stop we practiced proper hand sanitizing.  We also chewed on some jerky while hydrating.  We also noted how far we can go between fuel stops when Slaw is not along… just sayin.

[EDITORS NOTE: WHILE THE PUBLISHER OF THIS WEBSITE STRONGLY DISAGREES WITH THE ABOVE COMMENT, FREEDOM OF THE PRESS ENSURES ANY DORKY LITTLE DUDE WITH A KEYBOARD CAN WRITE JUST ABOUT ANYTHING HE WANTS AND WE DEFEND PAPA’S MEMORY OF EVENTS, NO MATTER HOW FOGGY THEY MAY BE THROUGH DISTORTION OVER HIS MANY MANY MANY YEARS ON THIS EARTH. HE IS A CHAMPION FOR BOOMERS EVERYWHERE AND MAY HIS WALKER ALWAYS KEEP THE RUBBER SIDE DOWN]

We are a few hours ahead of our projected schedule so we decided to head first to the Midland/Odessa Harley dealer before we get to our Midland hotel.  We made this short detour and noticed as we rode by that this dealer is closed and it didn’t seem as though it was only for the day.  Soon we arrived at our hotel in time for a much anticipated nap before our evening’s festivities. 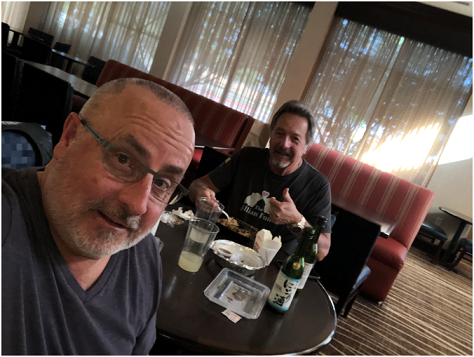 After a grand nap it was revealed that due to unforeseen circumstances Paco and Papa were on their own for dinner.  This lead to a google search turning up only the Tilted Kilt.  As luck would have it they did not answer because the automated voice said the number had been changed and no new one was available.  The front desk suggested Volcano.  Volcano is one part Japanese Sushi and one part Chinese cuisine.  We walked the 100 meters only to find out they have no dine in capability.  The attendant behind the plastic protector said he could not only get us a takeout meal but he could also send along two personal bottles of sake.  We gathered our meal along with our sake and headed back to the hotel lobby for a delightful asian fusion meal with wonderful sake.

All in all it was a perfect riding day.  Very little drama and we arrives safe.  …and sake can sneak up on you. 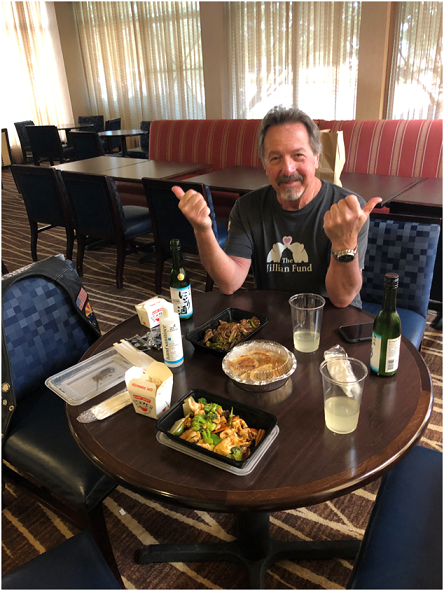 Today was a delightfully staid day.  We continue to be astounded at the number of people following us even though we have no GQ on our ride this year.  We may ride one day with our trousers cuffed in his honor.  Next year we will bring the cuffed one.  There seems to be much anticipation for our daily update… some anticipate (demand it early) more than others.  Monday will be a great day.  We will be thinking about all of you:

Most important, those of  you who follow while thinking about a loved one who is suffering and/or who as served.