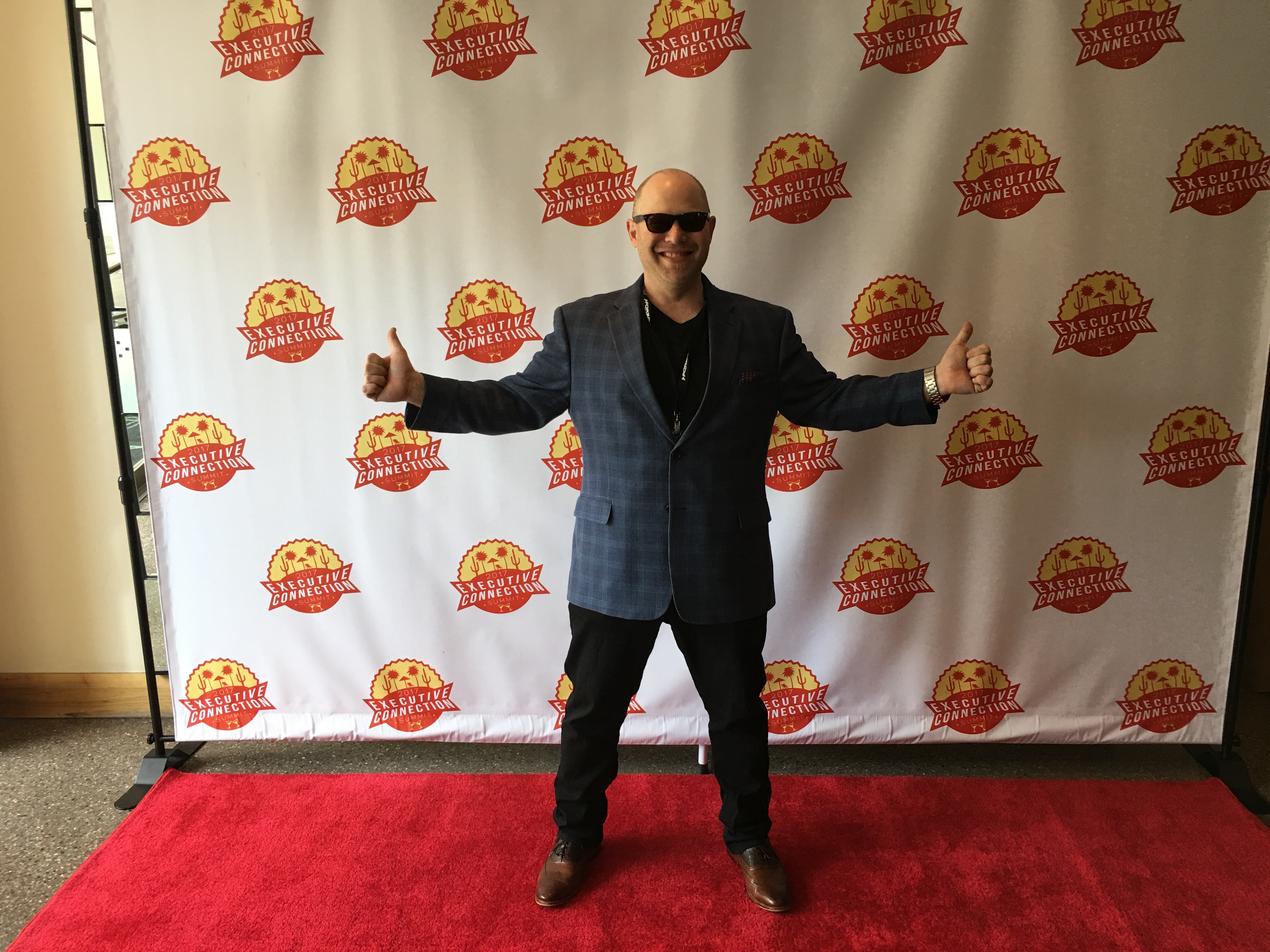 By Andy Slawetsky – MWA hosted their annual Executive Connection Summit (ECS) at the Valley Ho hotel in Scottsdale Arizona. I’ve said it before; this is one of the best shows out there and should be on everyone’s bucket list.

There is no shortage of industry events to attend. This one is truly different than all of them. This show is about networking, connections and big picture kind of stuff. OEM conferences are great; they show you what your MFP brand(s) is doing and where it’s going. Partner events are also important for similar reasons. None of them do what this conference does, which is put you in a room with a lot of the people that are running this industry.

The event began on Sunday afternoon with a press conference where sponsors had the opportunity to talk about What’s Happenin’ with their companies. This is their chance to make announcements and to explain strategies and initiatives. This isn’t just a bunch of PR fluff. HP took the opportunity to announce integration into MWA’s FORZA ERP. Xerox’s President Mike Feldman talked about the new Xerox. Clover’s Luke Goldberg, Jenny Fisher from GreatAmerica, Dave Perrota from ESP, Darrell Leven from BEI all spoke, and the list goes on and on. It was a pretty long press session. 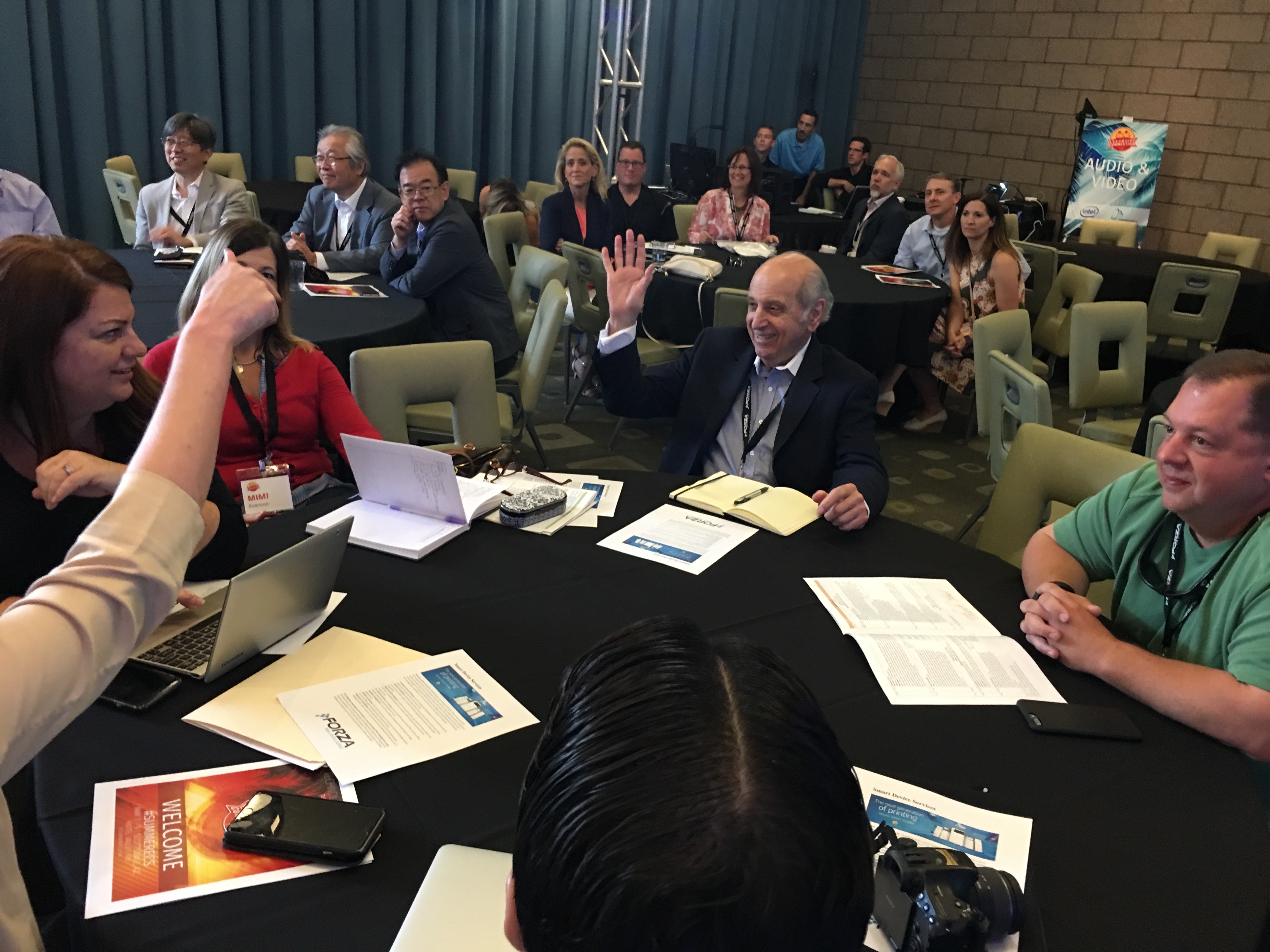 After the press event, we went next door where the networking portion of the evening kicked off. What a great first night! During the event, Jenna Stramaglio and Bill McLaughlin of Atlantic officially kicked off our Ride for Jillian, at which point Frank Cannata threw down the gauntlet with a $1,000 donation to get things rolling.

I think we raised $10,000 at that dinner through sales of tickets to auction off the custom Harley Davidson motorcycle that Clover donated for this charity ride – the second time they have done this in two years. 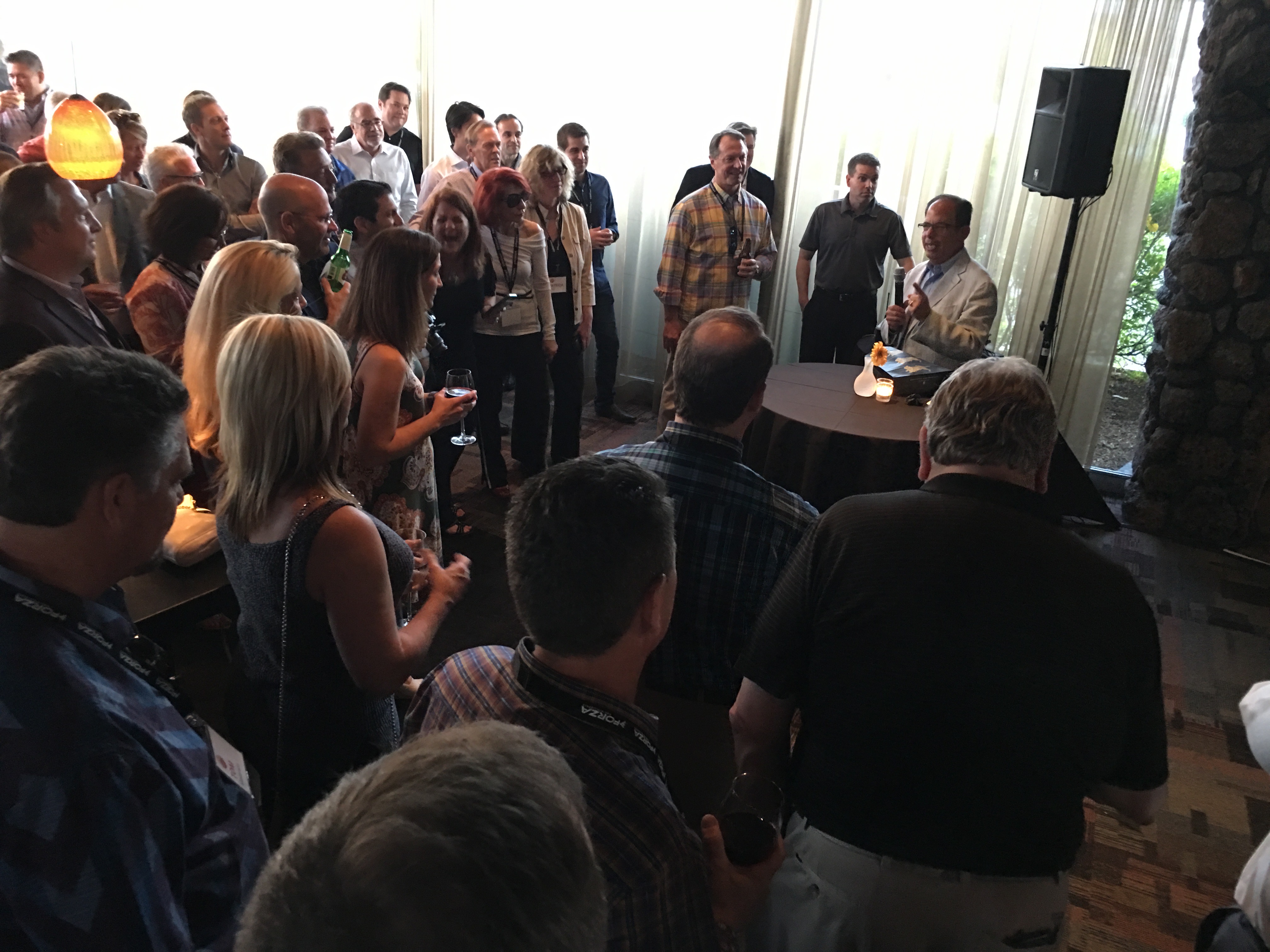 The next day started bright and early with digital transformation champion Joseph Bradley setting the tone for the day with an outstanding session, discussing everything from security, to Millenials to IoT. “Remember when a Kodak moment was a good thing,” was one of many great lines from Joseph. Some great perspective from someone from outside our little world of print.

The next two days were filled with great speakers and panels. Feldman did another session, where he told us about the kinds of dealers Xerox is looking for (a few days before acquiring MTBT). Konica Minolta President and CEO Rick Taylor spoke the next morning about their Workplace Hub strategy, telling dealers they need to stop focusing on just hardware and even taking jabs at other brands, saying the more they focus on hardware specs, the happier he is. “If you’re not in the game, then you’re out of the game,” he told listeners.

The format was great and the time flew by. Sessions weren’t too long and most were excellent. The panels were one of the things that truly set this show apart from other events. Where else are you going to see the senior executives from companies like Konica Minolta (Taylor), Sharp (Albregts), Muratec (D’Emidio) with executives from HP (Everson) and Lexmark (Boatman) on a panel together? I posted the full panel on YouTube. It’s long, but if you’re in this business, you’ll love it. 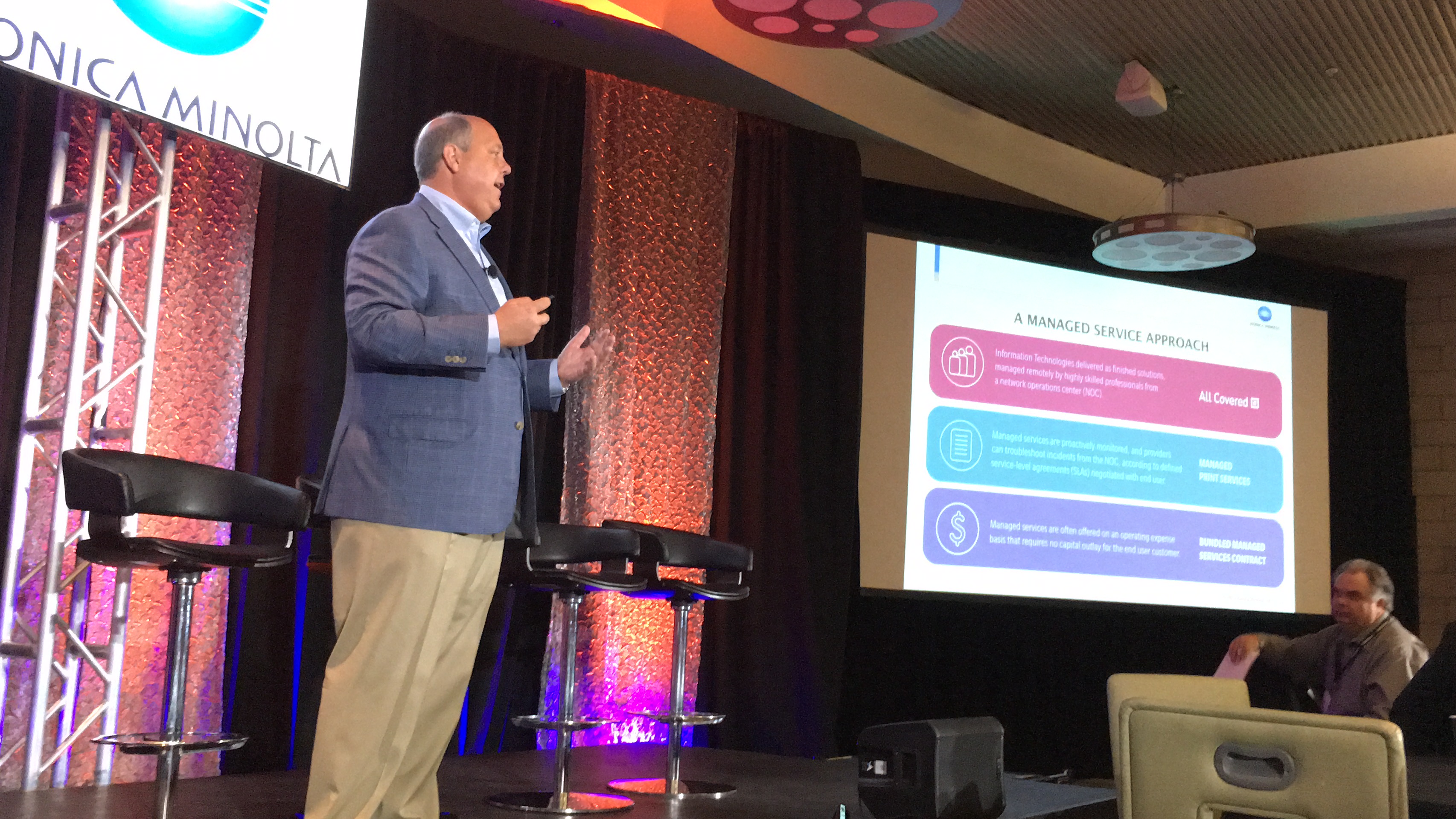 Watch as Rick tells Mimi to “bring it on” when she talks security. That panel was heated, contentious and at times, downright hilarious and the audience was able to ask questions, a bonus for attendees. Where else can Jerry Blaine ask competitor Rick Taylor general questions about the industry in an open forum?

Another panel run by SAP-Man Bob Goldberg was excellent too with John Swalwell of Perry ProTECH sitting with HP’s Brett Hunter, Chip Miceli, Bill McLaughlin and Brooks Borchering as they discussed security. Like the other panel, they fielded plenty of questions from the crowd.

In another session, Henry Washburn of datto talked security and data protection, something near and dear to my heart after being hacked twice in the last year. Very powerful big picture stuff with a focus on ransomware getting in through phishing emails. Security was an overwhelming undertone of this year’s ECS.

The first full day ended as it always does at The House, a great outdoor/indoor restaurant a block away from the hotel. Again, more networking as we had the opportunity to enjoy some cocktails with old friends and new ones. The night flew by and I found myself at the hotel bar with a ton of great people way too late in the evening with an early start just a few hours away.

After the morning sessions, which began with Rick, those that stayed hit the golf course for an afternoon of relaxation and more networking. I passed this year as I needed to get back to Rochester, but it was a blast the last time I did it (ask Jim D’Emidio why Penske had such a big bar tab).

A handful of dealers were there like the Berrys from MCC (see you soon for dinner during The Ride!), Barry Simon (see you on The Ride too!), the Micelis, Jerry Blaine and more. Tons of other companies had senior people there as well like Glenn from PSIGEN, Josh from ACDI, PaperCut, Larry Coco and so many more. Check out the photos.

This event is about connections. Since I returned home, I’ve literally been on the phone non-stop from people I either met or re-connected with at ECS. It’s the same conversation each time; “I was hoping to tell you more about what we do.” With all of the socializing and new people you meet, it is difficult to have longer conversations, but the beauty of ECS is that you connect at the event, and then follow up after. The key is that you connect.

One of the many things that make this event so special is the location. Scottsdale is beautiful and the Valley Ho hotel, is perfect. It’s very retro and looks like something the Rat Pack would have frequented. Everything is right there and you’re not walking miles back and forth to and from your room. The level of executives on stage at this event is unparalleled and nearly all of the OEMs had very senior people at this event. Those that didn’t certainly left the door open for companies like Xerox and HP, who clearly have identified ECS as a show they need to participate in. I love seeing how all these competitors come together at an event like this. Where else are you going to see senior HP and Xerox people sitting at the same table??

This show is open for all. Any dealer can attend and just about any vendor can as well. It’s not too big, and that’s something they’re grappling with as they’ve hit capacity at this facility. The beauty of this conference is the intimacy. You really can talk to pretty much everyone, at least for an introduction and exchange of cards. It’s truly one of my favorite events.

You get a feel for strategy and direction from OEMs, you network with the largest variety of senior executives in this industry under one roof. The event is actually fun and it’s over before you know it. You don’t find yourself saying, geeze, three more sessions and it’s done. Great people, great facilities, great weather and amazing conversations. I’ll say it again, put this one on your bucket list. 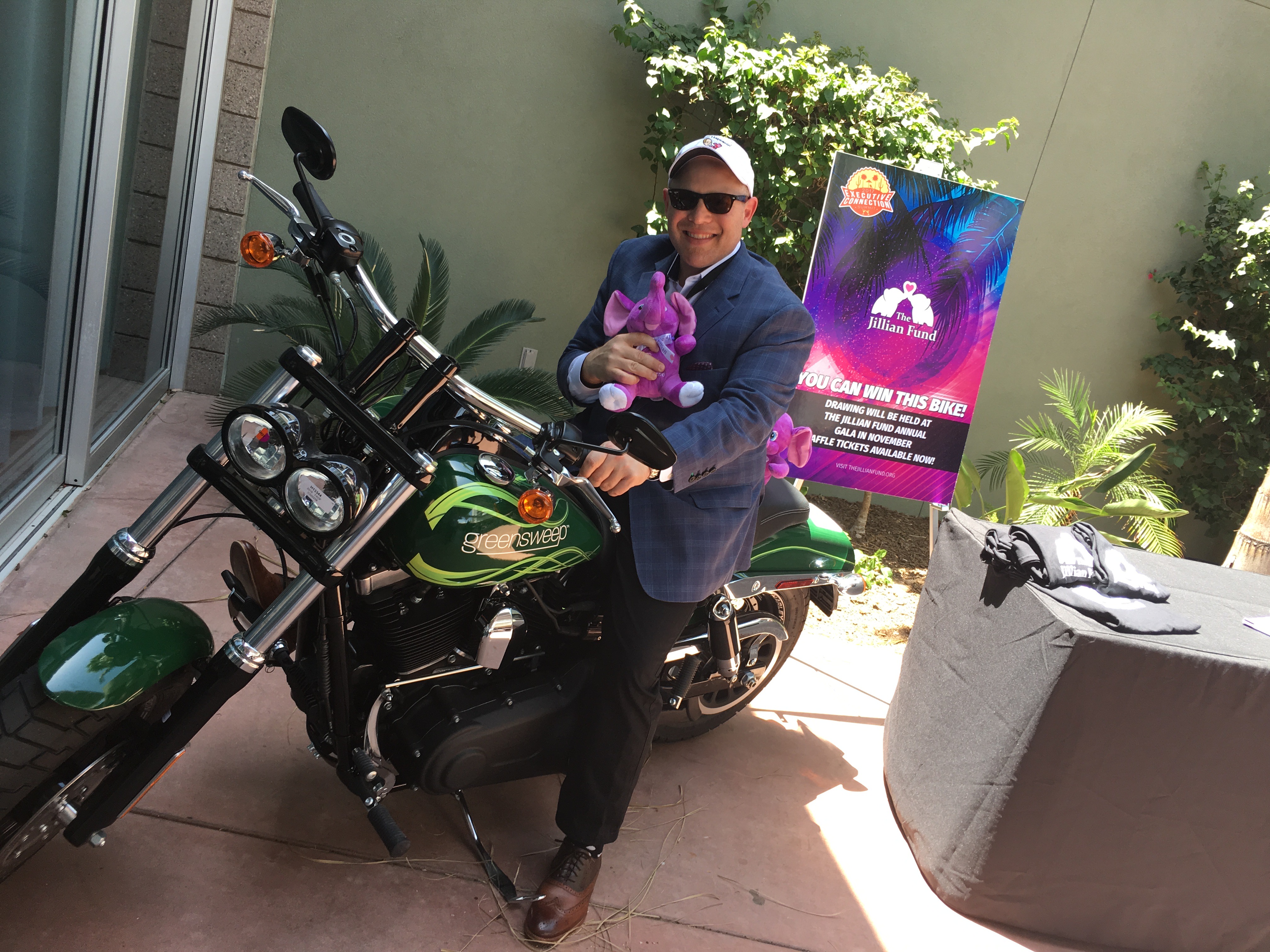 Pictures and Videos from Summer ECS