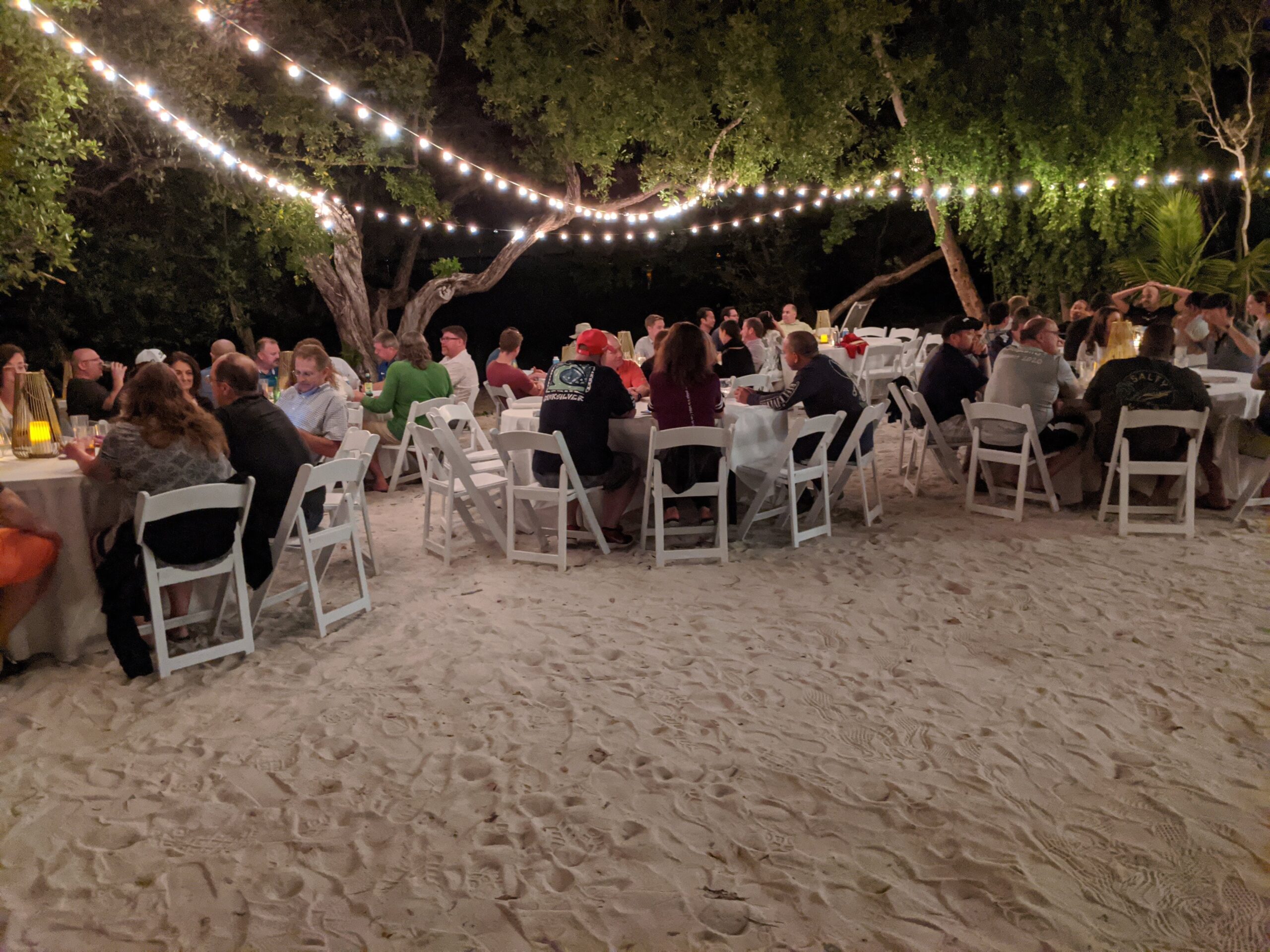 Just down the road from Miami where they traditionally hold this conference, Key Largo was a nice change for the roughly 100+ people at this event.

Another other change was the Summit’s timing, moving from August (in Miami) to January. Coming from this Western NYer, it was a great move! 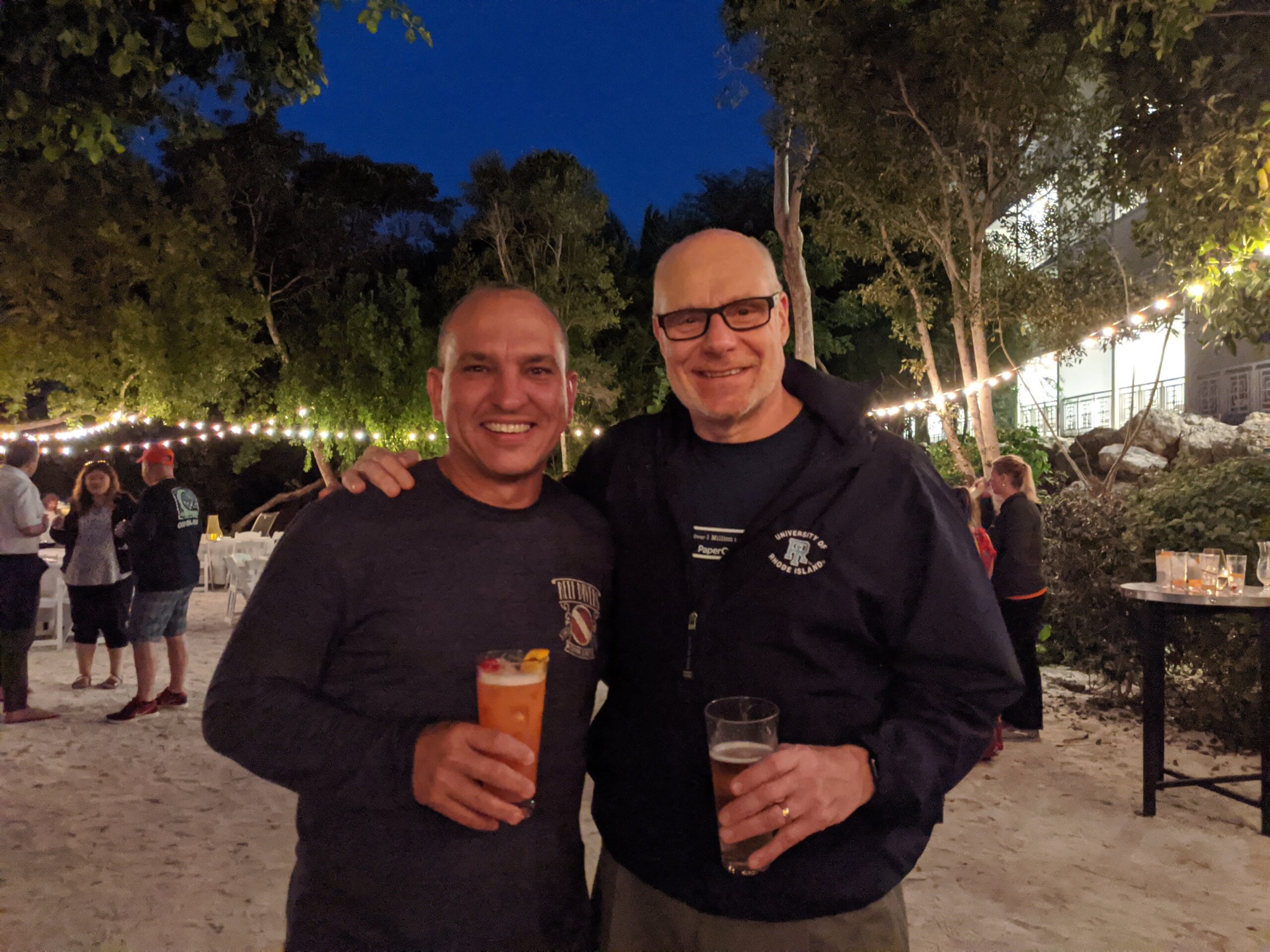 The entire program was held at a beautiful resort and all attendees, including ecoprintQ staff were encouraged to bring their families in order to more fully enjoy the facilities. Several people were extending their stays to explore the surroundings. 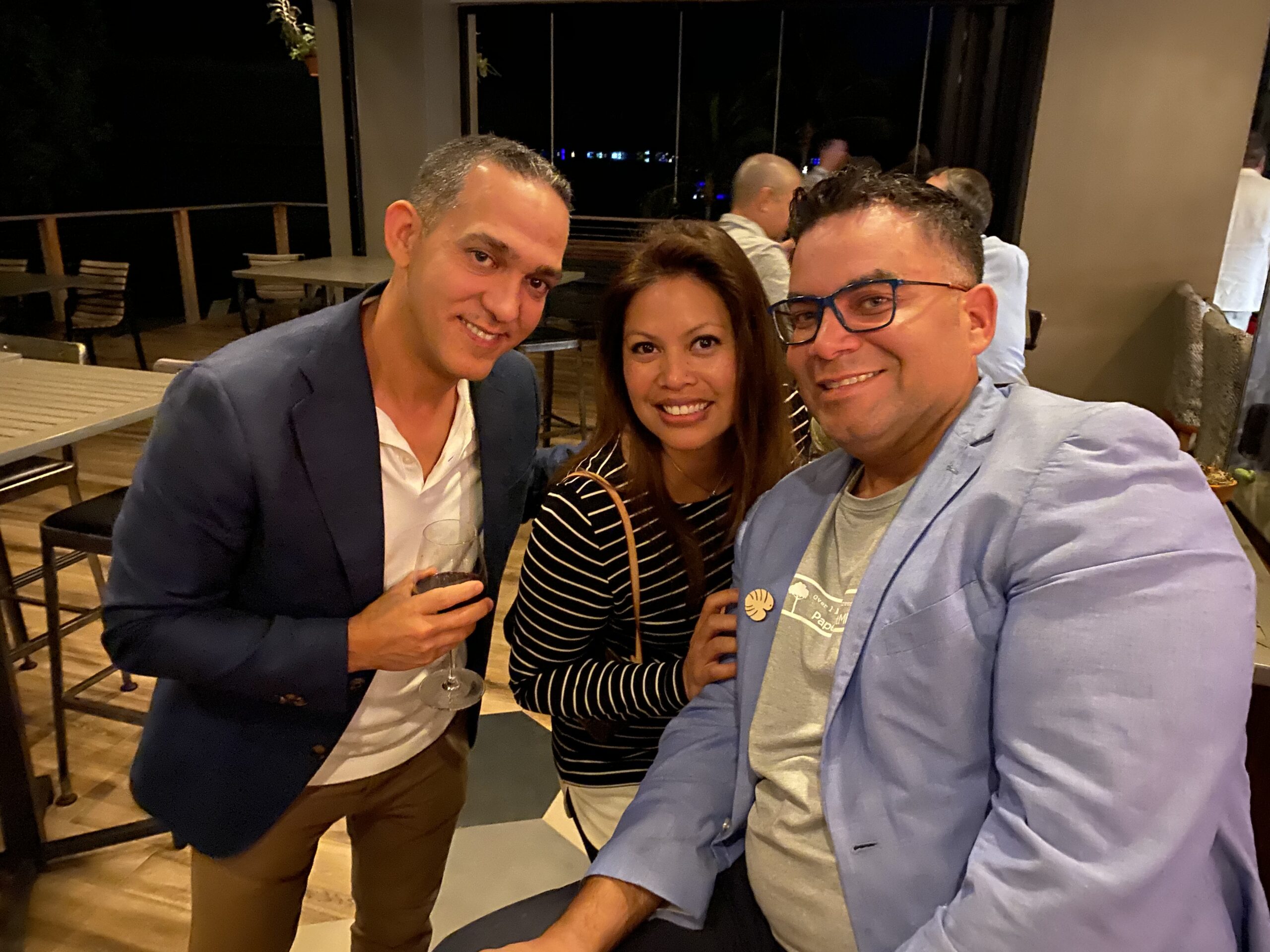 The first night began with a welcome dinner followed by cocktails on the beach. This was a more technical conference and the people attending were not your typical hardware crew that I tend to see at shows. These guys were solutions people, many from the likes of Ricoh, Dex, Marco, Kelly and several other big names.

The first day began with a welcome from Alfredo Milanes of ecoprintQ and an overview of what we would be doing and seeing at this event.

After some additional announcements, Joe Rubino of PaperCut stepped forward to introduce the large PaperCut crew on hand. PaperCut would be a major focus of this event and it was no coincidence that they were a significan sponsor. 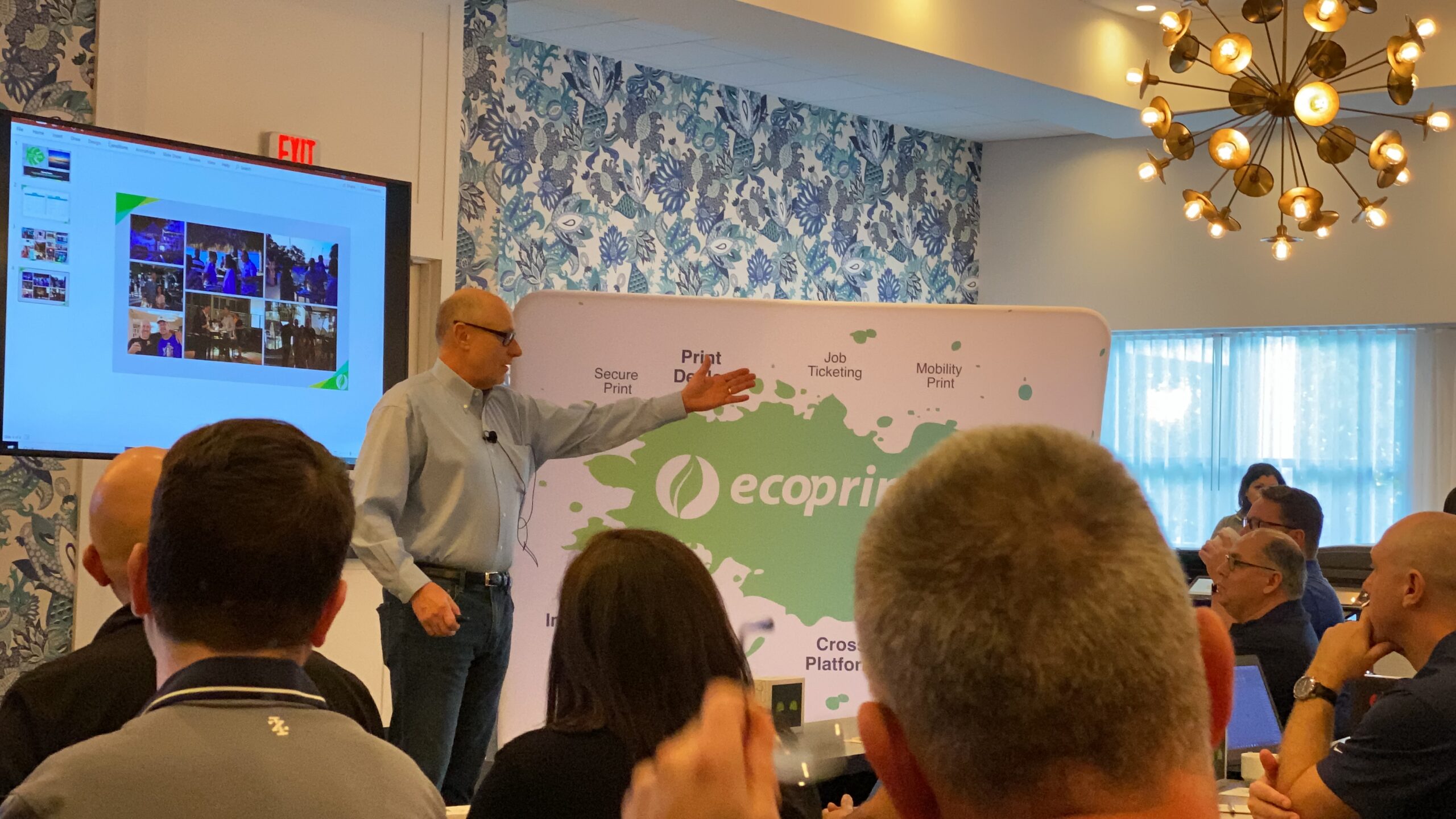 Once the initial presentations and overviews were finished, including one by PaperCut’s Dave Farrell, the group split into two smaller groups, which were technical and sales (I think). These presentations rolled on throughout the course of the event in two rooms. Breaks were timed so they ended at the same time and attendees were free to choose which sessions they wanted to go to. 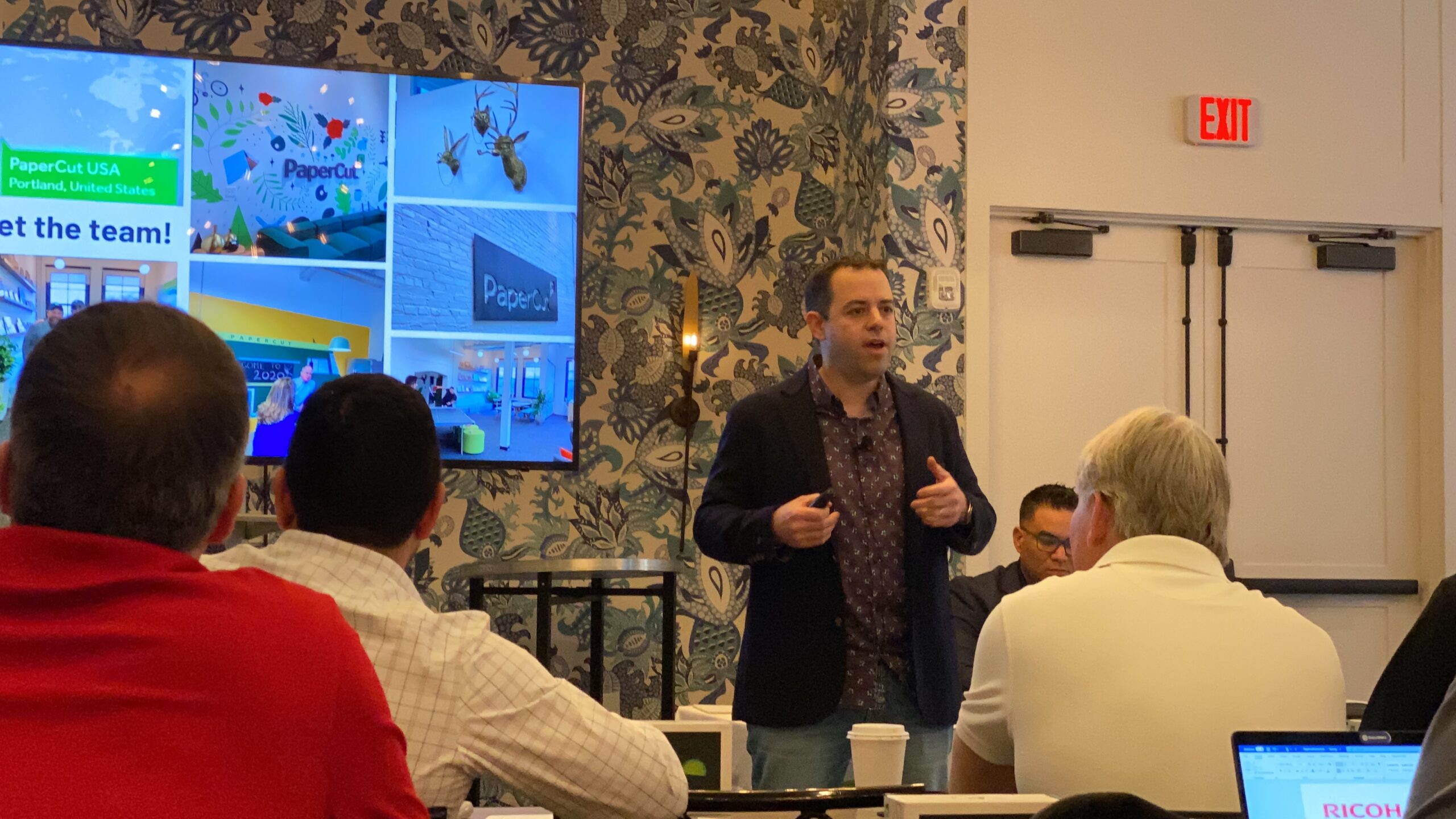 In-between sessions and during breaks, attendees would leave the rooms and walk through an area where event sponsors like Elatec and others were manning tables, showcasing products like their RFID solutions to a group that was keen to learn more about the technology. 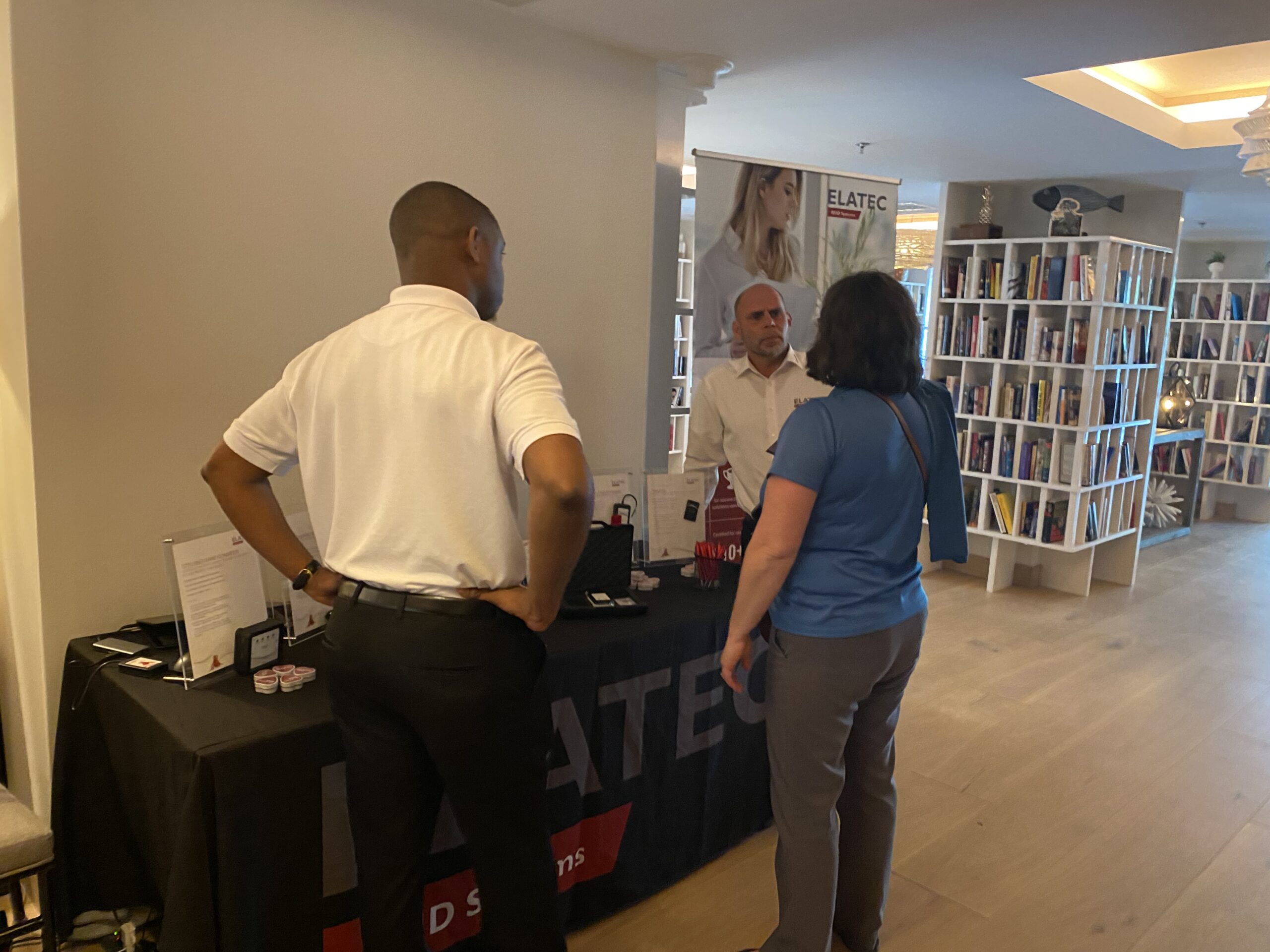 The day finished up with a cocktail hour and dinner overlooking the water. After lots of mingling we made our way downstairs to the beach bar and a large number of people from the event kept the party going, socializing for a bit longer before calling it an evening.

The second day began with more presentations, including one on PaperCut print management that was literally standing room only. 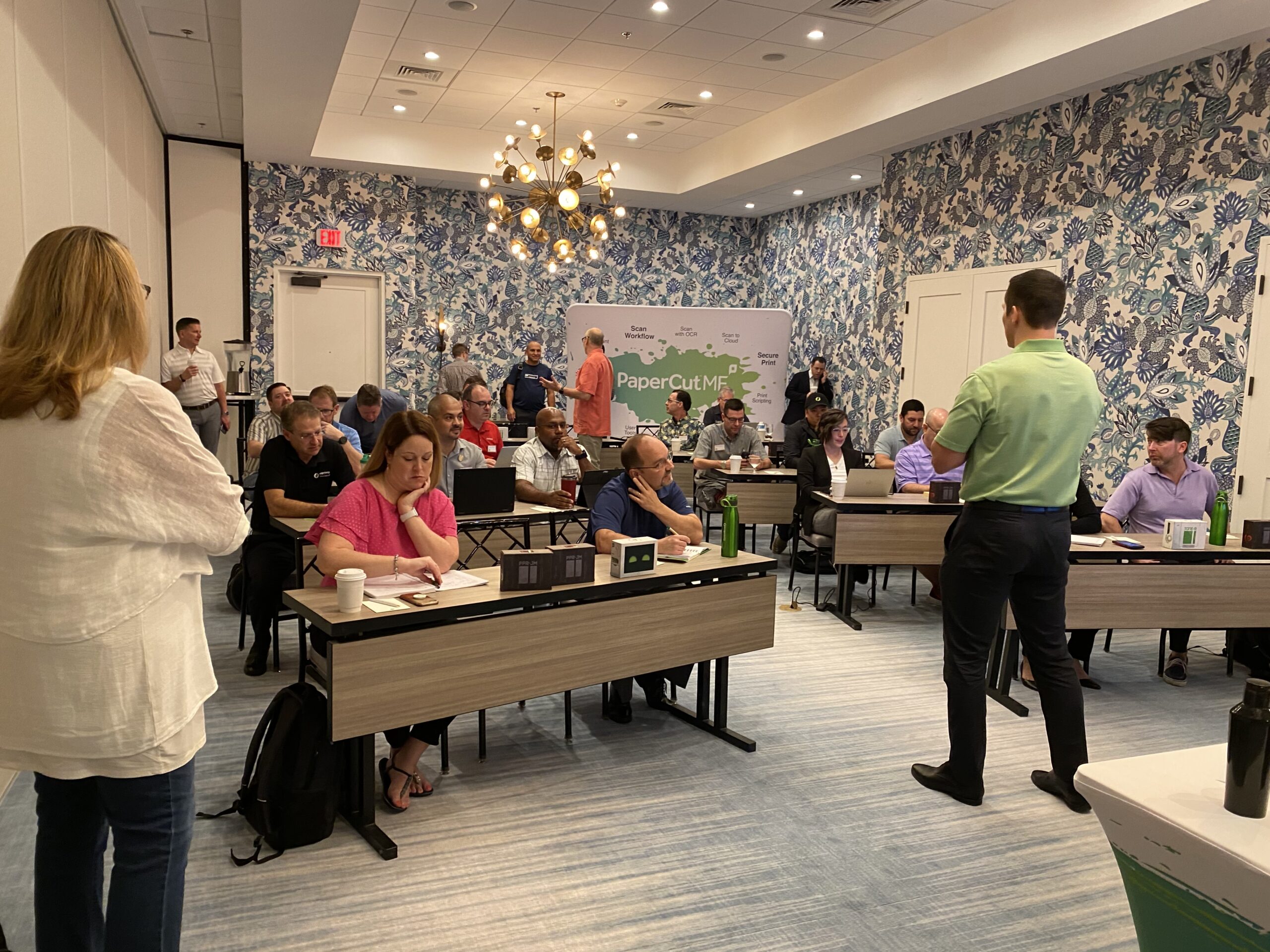 A great deal of time at the event was spent with companies like PaperCut and Umango explaining new features of their solutions, product updates, road maps, etc. PaperCut spoke quite a bit about their Google releationship and Cloud Print program, very popular topics to this crowd.

Other parts of the program included presentations by ecoprintQ staff like Dominick Bracero who introduced new additions to their offering, which will now include a real-time quotes tool. 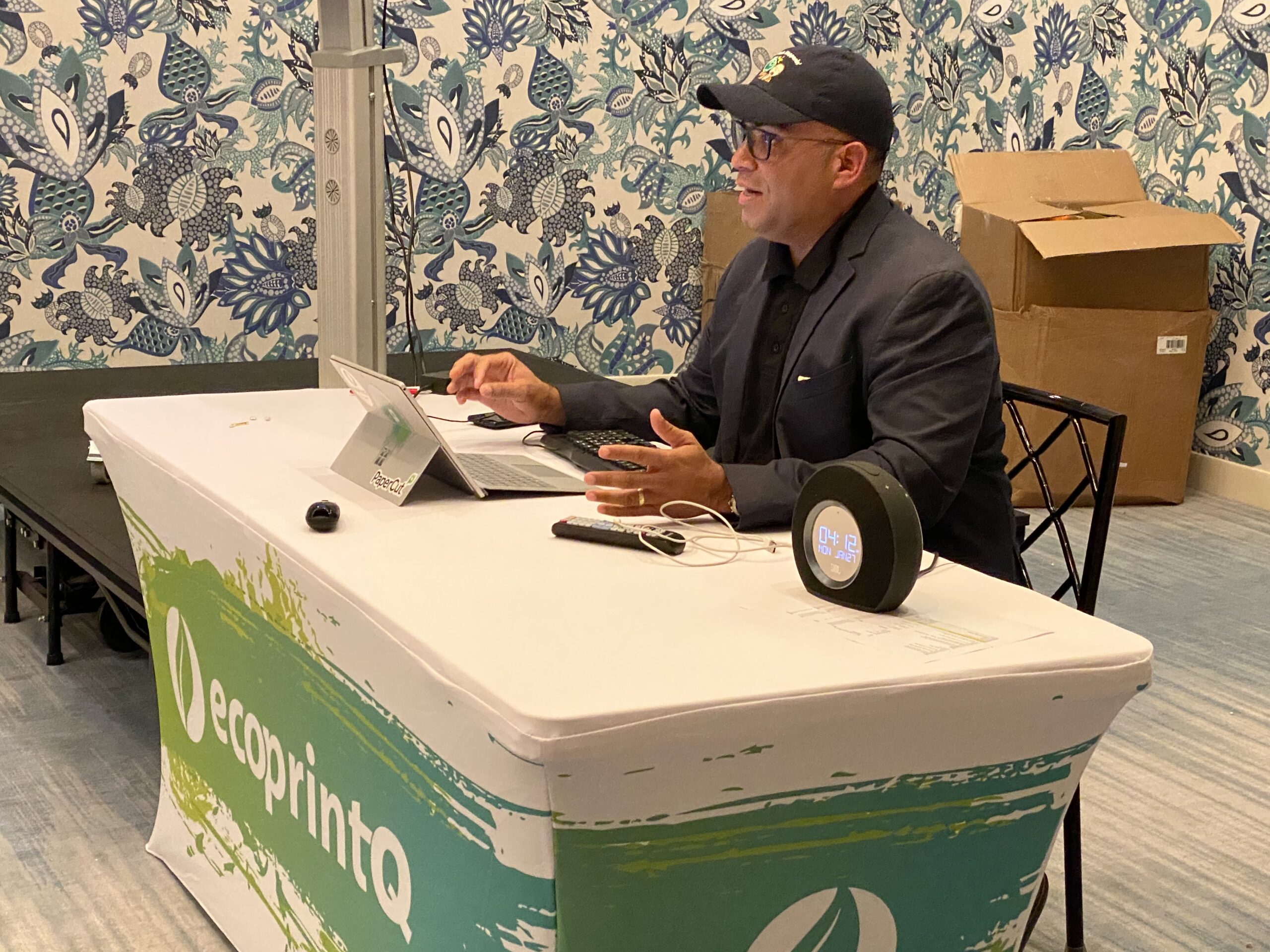 I don’t know much about their old quoting system, but I can tell you based on the reaction of the people in this session that this was a big deal. I heard 3 different dealers make very positive comments about this new capability. It seems this new quotes tool will be a major time saver and dealers were thrilled.

Day two ended similarly to the previous with another great dinner and drinks, this time right on the water. The next morning was an old school networking day, where attendees had their pick of several “breakout sessions” that included things like deep sea fishing, salsa lessons and more. 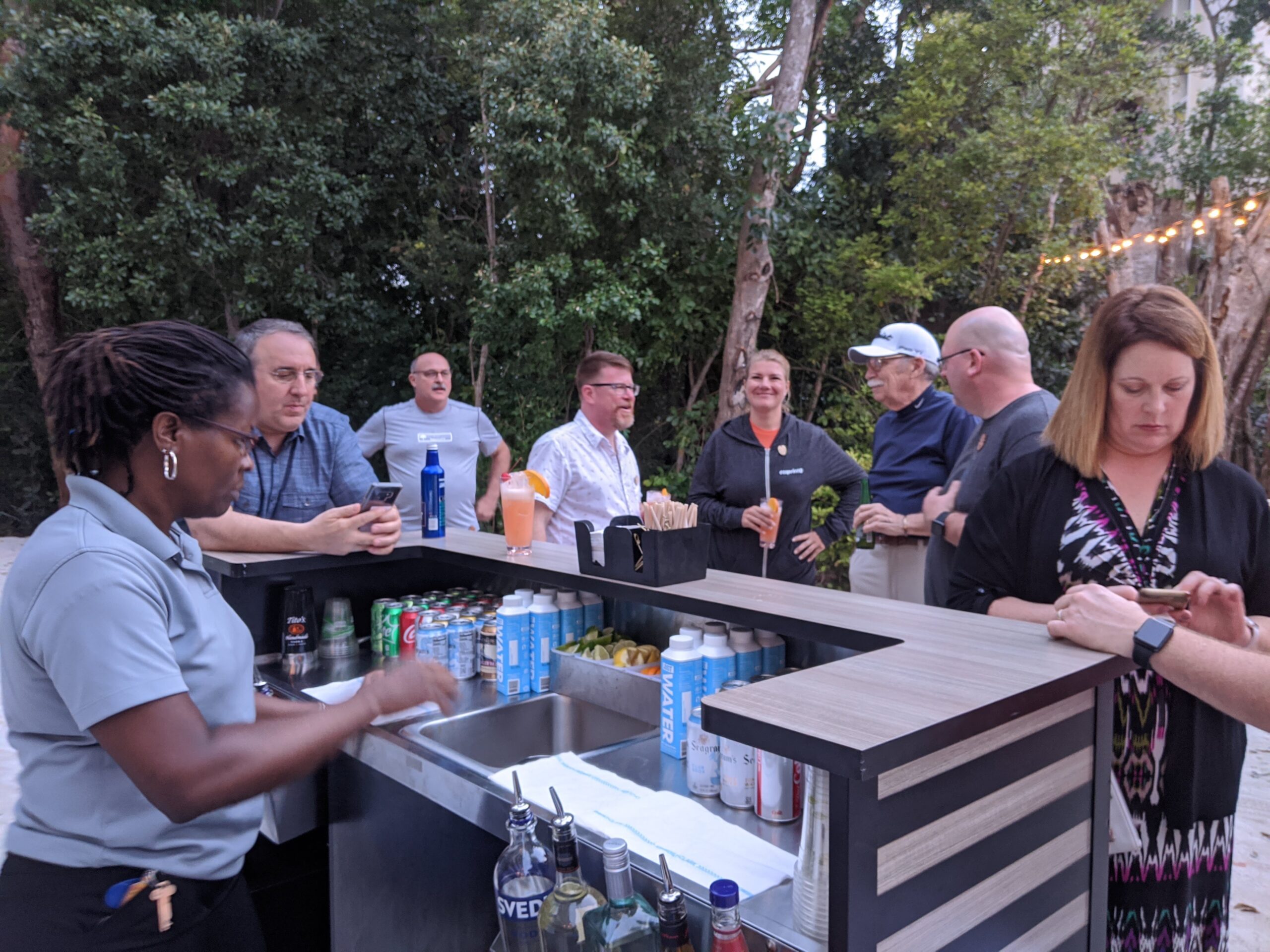 ecoprintQ is one of very few places where a dealer can source PaperCut products. They have a great team with the Milanes brothers and Dominick and they always put together a really informative couple of days where they get to spend time with the people in the trenches, update them, find out what’s working and what they need to fix all while thanking them for working with them. 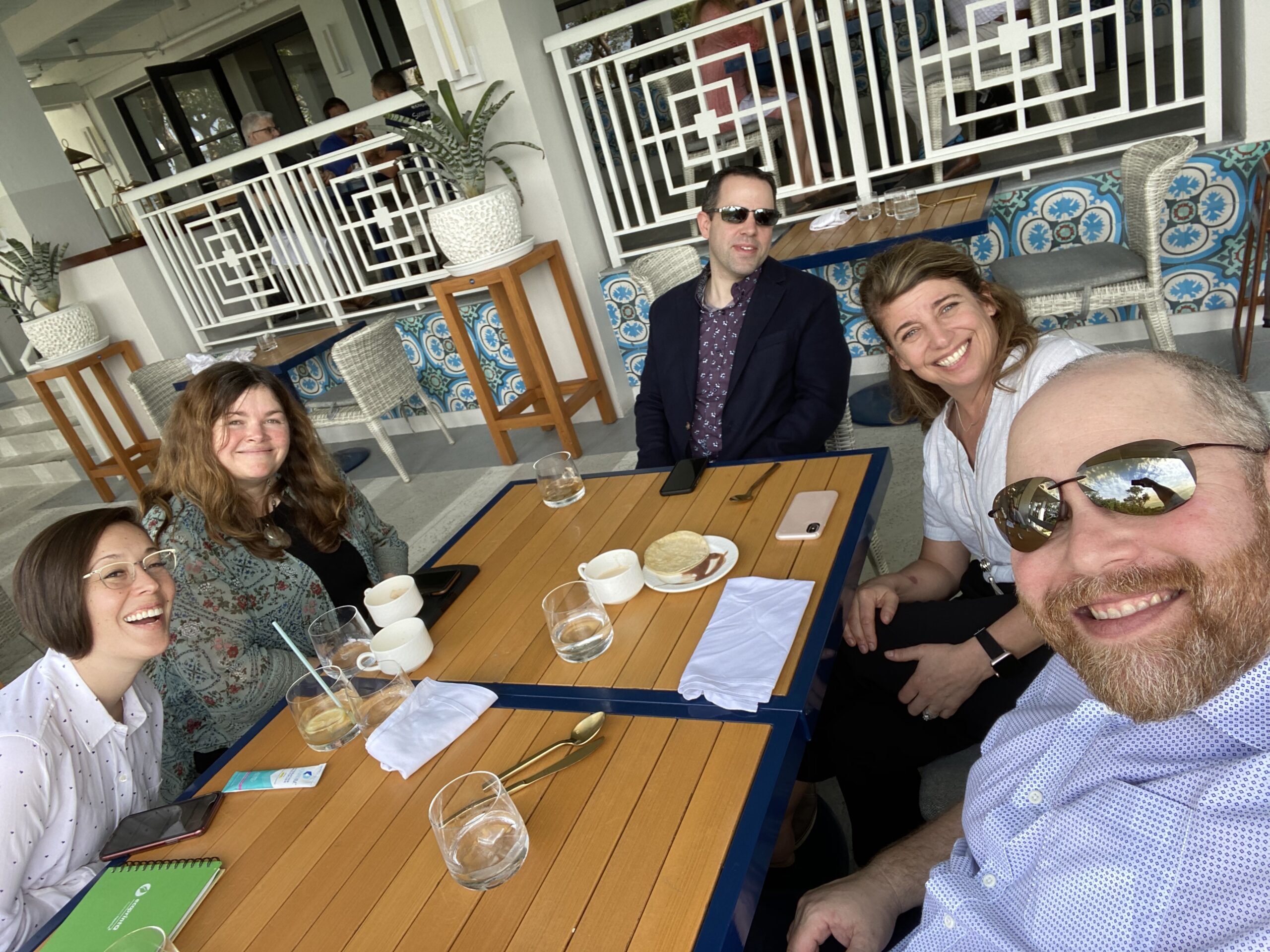 Held about every 18 months give or take, this Summit is a valuable couple of days for both ecoprintQ, their partners like PaperCut, Elatec and others and for their dealer and OEM branch attendees.

It was an excellent and informative couple of days and I appreciate the invitation to come cover the event.