Kennesaw, Ga. January 25, 2020 – Curtis 1000, with 65 locations nationwide and part of Taylor Corporation, has been a long-standing Heidelberg partner for many years. With two of the current Speedmaster presses aging at its Bloomington, Illinois location, Curtis 1000 recently installed a new Speedmaster XL 106-8P+L with both LED & Mercury UV curing to increase its capacity and capabilities as well as enhance its speed-to-market. 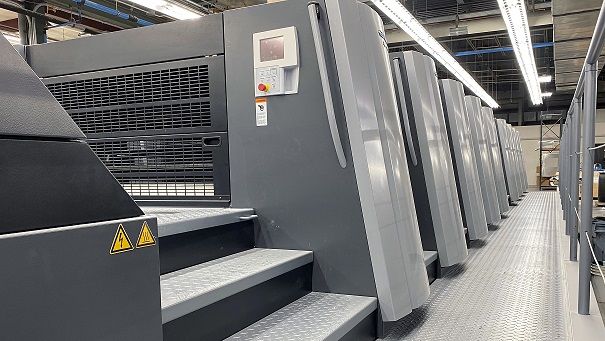 According to Henning, the timing was right for Curtis 1000 to invest in a state-of-the-art Speedmaster XL 106 equipped with Push-to-Stop technology and LED curing and UV coating capabilities. “We wanted to expand our offerings for our customers and become even more productive. The XL allows us to do both,” says Henning. “In many cases, this newer technology equates to better efficiencies and thus, lower prices for our customers.”

The integration of UV technology on the press will enable the company, who only had conventional press technology before, to take on some of its existing customers’ work that it was not able to produce previously. Additionally, shorter curing times means that Curtis 1000 will be able to streamline their workflow from press to postpress. “Like all printers today, we are seeing demands for turnaround times getting shorter and shorter. Now, we can get jobs to the finishing department much quicker and get jobs to our customers faster,” said Henning.

Curtis 1000 also anticipates that the press’s other new technology will aid in cost savings – from maintenance to labor to materials. Many of the cost savings will stem from significantly more efficient makereadies. This is due to advanced features on the press like Heidelberg’s Push-to-Stop autonomous manufacturing approach – driven by Intellistart, a unique integrated software system that greatly reduces the number of operating steps during a job change, and AutoPlate Pro, a fully automatic plate change system that controls precise plate feeding for exact and fast registration at the start of each job.

Additionally, getting up to color will be much faster thanks to Prinect Inpress Control – the industry’s leading inline spectrophotometer that measures and controls color and registers on the fly at any speed, delivering the first measurable result in less than 60 sheets. With Inpress Control, Curtis 1000 will no longer have to worry about color fluctuations during the run, which will also contribute to its time and material savings.

“We have great expectations for what this press will do for our business and our customers,” said Henning. Despite the fact that Curtis 1000 intends to start decommissioning some of its older Speedmaster presses in the new year, the company believes that it will increase its capacity 20% to be able to take on more customer work.

With four other Speedmaster presses, POLAR cutters, and Prinect Production Manager workflow, Curtis 1000 is no stranger to Heidelberg. Since the new machine was readily available from Heidelberg’s Print Media Center outside of Atlanta, there was a swift decommissioning process and shipment to Curtis 1000’s facility in Bloomington. According to Ken Notaro, Operations Manager at Curtis 1000, “Installation has been seamless up to this point, and we’ve been impressed by how quickly everything came together. I feel like the machine just arrived, and we’re already starting training with our crew.”

In spite of the long partnership between the two organizations, Curtis 1000 is still impressed by the level of service and professionalism that Heidelberg provides. “After all of the years of working together, Heidelberg remains the leader in offset technology. It’s been a great partnership, and I anticipate it being one for years to come,” said Henning.

Curtis 1000, a Taylor company, is a full-service business communication company with a boutique approach to delivering exceptional service. Curtis is equipped to serve customers in every state from its vast network of production and distribution facilities. With access to the industry’s broadest range of capabilities for print and digital communications, Curtis 1000 get customers’ messaging to their audience faster.

Are You Prepared to Accelerate your Recovery?