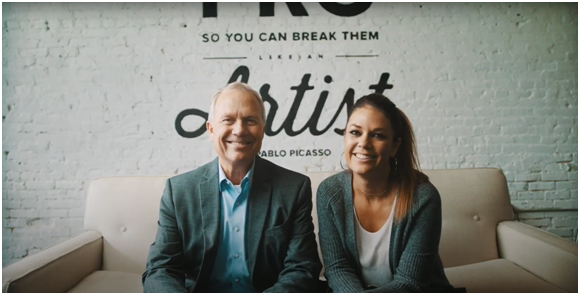 While Bode’s been the primary partner in charge of day-to-day operations since 2011, she makes the final buy out to formalize the transition of power this week. According to Bode, “this has always been the plan. It’s just been in the last five years or so, though, that we’ve gotten serious about the when.”

One of Pearson-Kelly’s core values is transparency. As such, they’ve never shied away from having conversations about their succession plans with employees or clients. Bode says it’s actually provided comfort and clarity to individuals looking to partner with the growing company. This transition, for her, means, “we’re following through and doing what we’ve always said we would.”

Seven years ago, I sat at Chelsey’s kitchen table with her and Mike and asked, “how do I know this is going to last?” Because I was at a competitor and wasn’t about to jump ship if I was walking into another situation like I was planning to leave. She said, “This is my long-term plan.” That’s why I’m here now.

A FEMALE OWNER IN A MALE DOMINATED INDUSTRY

This transition is a step forward for Pearson-Kelly Technology, and for a predominantly male-owned industry. Despite women making up over 50 percent of the workforce, only 25 percent of computer and technology related jobs are held by women. And that percentage has been declining since the 1980s.

It has been amazing to watch Chelsey grow in her leadership roles and support other women leaders along the way. I, personally, have had the pleasure of collaborating with her on business and people development on several occasions.

Not only does Bode build female leaders within Pearson-Kelly, but she also co-founded and co-chairs a national peer group of technology companies who discuss best practices and industry innovations. She sits on another board for a technology association, where she is one of only 4 sole female owners among 64 tech organizations.

WHAT THIS MEANS FOR PKT’S FUTURE

As sole owner, Bode shifts more into her role as Visionary – creating and designing the long-term vision and goals for Pearson-Kelly Technology – and relinquishes some of her day-to-day responsibilities to her Executive Vice President & Integrator, Lee Flood, and the rest of her leadership team.

This transition makes that process easier, she says, because she feels she can take more risks now that it doesn’t jeopardize what her dad worked for. “Before, I sometimes felt guilty for taking risks or really trying to grow the company because I knew it would be a long-term investment.,” she said.

Years ago Mike put everything on the line to build PKT and wisely had faith in Chelsey to co-pilot it through years of growth.  Mike and Chelsey have amazing entrepreneurial spirits and an honest appreciation for the PKT team and their clients. The future of PKT is very bright!

Day-to-day operations will not change. The Pearson-Kelly team continues to focus on its core mission: to simplify technology for small and medium sized businesses.

Mike Kelly continues as an employee of Pearson-Kelly Technology, focusing on business development. The duo accomplished their first mission in building a successful technology company together, and now set their sights on conquering their next. Still as a duo, just defined differently.

Chelsey Bode joined Pearson-Kelly Technology in 2007 as its sixth employee. She is a GO Magazine 2009 20 Under 30 Honoree, a Cannata Report 2018 Young Influencer, a Springfield Business Journal 2018 Most Influential Woman, an ENX Magazine 2018 Industry Difference Maker, a Springfield Business Journal 2020 Trusted Adviser, a Biz 417 Magazine‘s 2020 10 for the Next 10 and a TigerPaw 2021 Channel Influencer.

She has also been featured in the Smarketing Show, ENX Magazine, the Cannata Report, BPO Media, GreatAmerica Financial Services and Industry Analysts.

Bode donates her time to several local boards including the Good Samaritan Boys Ranch, US Bank and the Institutional Review Board for BioKinetics. She also sits on advisory boards for industry organizations and groups like Connectwise, ACDI, Intermedia and Copier Dealer Association (CDA).