ROCKLAND, MA, ISSUED JULY 7, 2022…It’s a relatively small percentage of businesses that survive all the way to their 50th anniversaries. 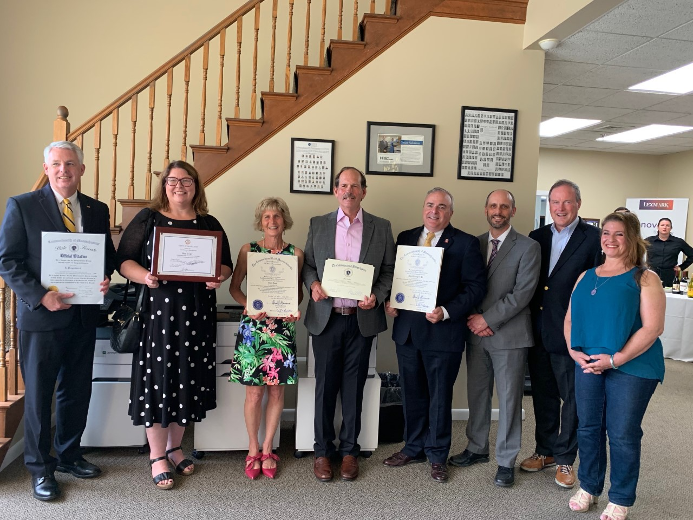 So it was definitely a cause for celebration recently when Bay Copy (http://baycopy.com), a leading provider of digital document solutions, achieved that noteworthy goal. Bay Copy commemorated the impressive milestone at its Rockland headquarters with a gathering that included employees, family, friends and a number of local and state officials.

Bay Copy CEO and owner Ray Belanger recalled that his father, Ray Belanger Sr. first launched the company on April 1, 1972 under the name Bay State Business Products in Abington. When the company first opened its doors, Richard Nixon was the United States President; the average price of a house was $28,810, and later that year the Oakland Athletics won the World Series.

In its half century of business, Bay Copy can claim greater longevity than some well known names of today, including Twitter, eBay, Amazon, Facebook, and even Microsoft.

The company relocated to Rockland in 1985, when they purchased a 14,000 square foot facility at 100 Reservoir Park Drive. In the early days of operation, the company sold duplicating machines and computers. Today, Bay Copy has grown to become is the region’s leading provider of Managed Print Services (MPS). The company’s products include a full line of Konica Minolta, Toshiba, Muratec and Lexmark equipment, along with the supporting technology. With the industry advances and innovations, Bay Copy has become a “go to” source for companies and organizations looking to reduce their per-page cost of generating documents.

Ray Belanger joined the company in 1982, after having worked in high tech sales for a few years. In 1992, when Mr. Belanger (Sr.) retired, Ray purchased his father’s shares and became the company’s sole owner, marking the second generation to lead the business.

A number of elected and community officials were on hand to congratulate Bay Copy on its achievement. Bay Copy received official proclamations of congratulations from the office of Massachusetts Governor Charlie Baker, and in-person presentations from State Senator John Keenan, State Representative David DeCoste, and Plymouth County Commissioner Jared Valanzola. Additionally, members of the Town of Rockland’s Board of Selectman Tiffanie Needham and Lori Childs congratulated the company with a proclamation. They were joined by Rockland Town Administrator Doug Lapp, and South Shore Chamber of Commerce President/CEO Peter Forman. Additionally, there were representatives from several of Bay Copy’s industry partners – Lexmark and Konica Minolta – who traveled to celebrate the event.

Each person who spoke remarked about the longevity of the business and how it has been a good neighbor to the region, and of the good work of Ray and the Bay Copy team. Peter Forman recalled Ray’s generosity in helping businesses in need, and his work on behalf of the South Shore Chamber, including his having served a year as Chairman of the Board of Directors.

Ray Belanger thanked everyone for attending and being part of the celebration, and attributed much of the company’s longevity and success to the dedication of the company’s employees. He noted that six of the team members have a combined longevity of more than 140 years, with the longest employee having been at the company for 39 years. “That’s almost as long as I’ve been here,” he quipped.

Several of the Bay Copy employees spoke of a culture with a real “family feel” to it where people care about and support each other.

“I am grateful to everyone who has helped us along the way,” Ray said, “including of course family, our clients, our industry partners, our friends, and the many officials who took time out of their schedules to celebrate with us tonight. It has been an incredible journey and I am privileged to work with a great team of people every day – and we are excited to see what the next years will bring.”

Scott Cullen, editor-in-chief of the industry journal Cannata Report, thanked Ray for being a trusted source in providing a deeper understanding of the industry. “Ray and his team have a keen knowledge of what their customers need and have done a terrific job of retaining many of those customers,” he wrote.

Bay Copy has won a number of industry awards including “Re-Seller of the Year” by the national Business Technology Association, “Applications Dealer of the Year” from Konica Business Technologies; “Elite Dealer” from Office Dealer Magazine; the Business Technology Association Award of Excellence; the South Shore Chamber of Commerce’s Success Profiles award; and the United States Chamber of Commerce’s Blue Chip Initiative Enterprise award.  For additional information on Bay Copy, services or a demonstration of the latest technology available, please call (781) 871-6670 or visit the company’s website at www.baycopy.com.

If You’re Problem Solving Who is Steering the Ship?