Kennesaw, Ga. February 8, 2021 – Forced to move from its old location, Williams Printing (WPI) recently built a brand new 20,000 square foot facility in Rural Hall, NC. Rather than relocate its older equipment, the company decided the time was right to also upgrade its existing production portfolio. Choosing Heidelberg as its core provider for everything from prepress to press to postpress, WPI installed a new Suprasetter CtP, Prinect Production Manager, a Speedmaster CX 75-5+L running on Saphira Consumables, a Versafire EP, and a POLAR Jogger and Stacker. 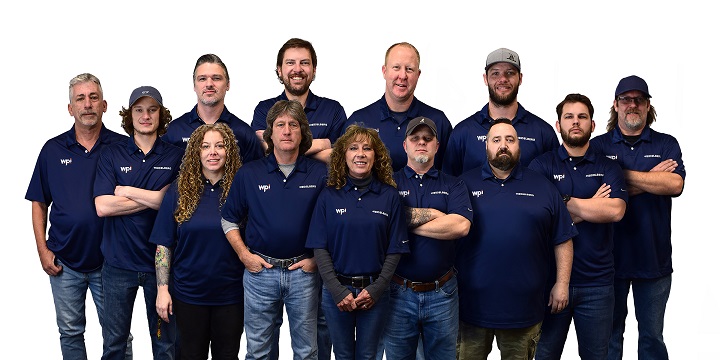 A commercial printer located outside of Greensboro, NC, WPI prides itself on being “really good at doing the things that other people don’t do well.” With a strong focus on quality and customer service, the company achieves faster than average turnaround times thanks to its smaller, agile team. According to Owner Kevin Williams, “We can easily produce 250,000 four-color brochures folded and shrink wrapped in 2-3 days versus larger companies, where it could take 2-3 days just to get a quote.”

A large part of being able to accomplish these quick turns is WPI’s recent investments in brand new Heidelberg technology across all parts of its business. In prepress, the company installed a Suprasetter 106 CtP along with Prinect Production Manager workflow. With the workflow upgrade, getting files from prepress to the company’s new Speedmaster CX 75 is quicker than ever. Also, with the advanced technology of the CX 75, WPI completes makereadies in less than 20 minutes as opposed to its older press, which would take up to 60 minutes to get a job ready for a full production run. “It’s like we were driving a 10-speed bicycle every day, and now we have a high-speed sports car,” said Williams.

In addition to seeing a drastic increase in overall productivity, WPI is also seeing great improvements in its print quality. According to Williams, “When we run a long job on the press, I’m confident that 10,000 or 20,000 sheets in, I can pull a sheet from the delivery, and it will look exactly like the first sheet that was produced.” Contributing to the consistent print quality is WPI’s decision to run the press exclusively using Heidelberg Saphira Consumables, which includes everything from ink to blankets to plates and fountain solution. For Williams, using Saphira Consumables was based on two criteria: that the press would produce optimal quality and that consumables’ prices were competitive with other manufacturers. “I assumed I would pay higher prices because the products said ‘Heidelberg,’ but I couldn’t be more wrong,” said Williams. Not only is the company satisfied with the price of its press supplies, but it has been impressed by the consistency the products achieve on press, day in and day out.

For its shorter runs, WPI also made the decision to invest in Heidelberg with a new Versafire EP. After using other digital manufacturers for over 10 years, Williams grew weary of their quality and service. He decided to make the switch to Heidelberg after speaking with other printers who are running Versafires. Installed a little over 6 months ago, the Versafire is exceeding WPI’s expectations for productivity, quality, and user-friendliness of the machine, which also uses the Prinect Digital Front End for simpler and easier impositions.

Williams has also been impressed with the technical support he receives for the Versafire from Heidelberg. “The support was a big factor in why we decided to switch everything over to Heidelberg. The ability to call someone and get a direct answer or know that someone will track down an answer rather than getting the runaround is priceless to any business owner.”

A Change in Mindset

Despite its recent “Heidelberg-heavy” investments, WPI has not always been a fervent supporter of Heidelberg. After a lack-luster experience with a cutter purchase in the early 2000s, Williams lost trust in Heidelberg’s overall vision. Over the years though, Williams began to hear about Heidelberg’s new technology and better service coverage through conversations with the Heidelberg team and its customers. Now after running his new products for over six months, he could not be any happier with his decision, “These investments have completely changed my mindset on Heidelberg, and I will only buy from them in the future.”

WPI is a reliable partner with consistent results, which it achieves by being the solution for any request a customer may have, focusing on quality and customer service, regardless of situation or circumstance. Realizing today’s fast paced business environment requires a partner to be even more agile or adaptive than the customer themselves, WPI strives to create the benchmark for which its competitors strive to attain. From concept through production and delivery, “Consider it Done!”