Daytona Beach, Fla. (January 31, 2021) – The No. 10 Konica Minolta Acura ARX-05 scored its third victory in a row at the 59th Running of the Rolex 24 at DAYTONA after numerous hard-fought battles throughout the prestigious 24-hour race. The result now means the Wayne Taylor led team equals Chip Ganassi Racing for most consecutive overall team victories at the Rolex 24 at DAYTONA. Most notably, the Konica Minolta team has won the iconic endurance event four out of the past five years and, today, garnered the first overall win for the Acura brand and the ARX-05. 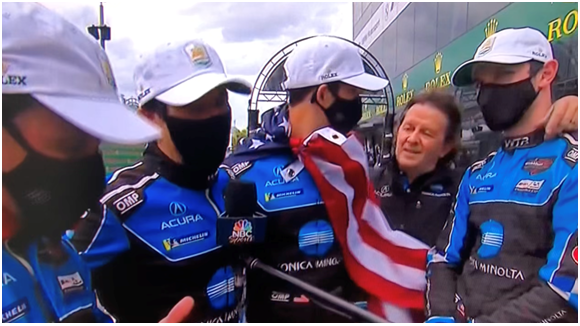 Filipe Albuquerque started the race for the No. 10 Konica Minolta Acura team from the fifth position, before quickly settling into a rhythm aboard the No. 10 Konica Minolta Acura ARX-05, maneuvering his way through the 49-car, five-class field. As the race transitioned into the night earlier than usual thanks to the later start time, the blue and black machine, also piloted by teammates Ricky Taylor, Alexander Rossi and Helio Castroneves, hit the front of the field to take the lead before having to pit for a necessary brake change during a timely full course caution with 11 hours remaining.

The No. 10 Konica Minolta Acura ARX-05 maintained their pace throughout the night and well into the next day, and by the time there were five hours remaining, the team had made its way back to the top of the leaderboard and continued to extend its lead as the hours ticked away.

With the added excitement created by a handful of late race full course cautions, the blue and black Konica Minolta machine continued to demonstrate front running pace and was able to clinch a third Rolex 24 victory in successive years. With an all-new year driver line-up, along with embarking upon a new and exciting manufacturer relationship with Acura, this was a special moment for the team.

“It’s an amazing accomplishment from the whole team,” said (Ricky) Taylor. “Everybody from Wayne Taylor Racing, Konica Minolta, Acura, HPD and Harrison Contracting all have their own way of winning and doing things. So, to bring together a new manufacturer and team relationship and start off with such success at the most difficult race of the year, it puts an emphasis on what a talented group of people we have here. I’m really proud of my Dad especially, for the team he has put together as he works really hard. As a son, I am very proud, and as a team member, everyone pushed their hardest and all the effort that went in over the very brief off season was just a full team effort and executed to perfection.”

“What a start with Wayne Taylor Racing, Konica Minolta and Acura,” noted Albuquerque. “It could not have been better, and this was the craziest race of my life and probably for many of the other drivers as well. It was very tough, especially mentally because we had to fight hard drive fast all the time as we were probably lacking just a little bit of pace. But we had the advantage with the fuel, and we had track position so I was holding on to that for everything I could, and in the end, the car behind had a puncture which made our life easier. I’m just so happy, and a big thanks to Wayne, Ricky, Helio, Alex and the rest of the team as it was perfect execution by everyone.”

“That was quite a dramatic 24 hours, but I’m really proud of the entire team and Acura,” commented Rossi. “I’m just so proud to be a part of an incredible accomplishment with Wayne Taylor Racing winning three in a row. To do it with a new manufacturer and start their journey together like this is something that is very special to be a part of, and I can’t wait for the next one.”

“What a day, I’m super happy and actually, I don’t want to leave at all!” enthused Castroneves. “I want to stay here as the 24 hours was an amazing experience with Wayne Taylor Racing, I can’t thank them enough for making me a part of this amazing group. The most joyful aspect is enjoying this with Ricky, so we carry the same momentum from last year and it’s just been amazing. What a day, I’m just so happy!”

“What a fantastic week,” an ecstatic team owner Wayne Taylor highlighted. “I know I’ve surrounded myself with great people from Konica Minolta, to Harrison Contracting, to Acura, to HPD and to all of my fans and friends. It was something really special for me having had a 28-year relationship with another manufacturer where we had a lot of success. So, to be able to get another program, with another manufacturer and to be as successful for both of us, is really just fantastic.”

The 2021 IMSA WeatherTech SportsCar Championship continues on March 17th for the second longest endurance race on the calendar, the Mobil 1 Twelve hours of Sebring. Ricky Taylor, Filipe Albuquerque and Alexander Rossi will pilot the No. 10 Konica Minolta Acura ARX-05 for the historic event, and the trio will be looking to achieve the team’s second victory at the iconic Florida venue.

Konica Minolta Business Solutions U.S.A., Inc. is reshaping and revolutionizing the Workplace of the Future™ with its expansive smart office product portfolio from IT Services (All Covered), ECM, Managed Print Services and industrial and commercial print solutions. Konica Minolta has been recognized as the #1 Brand for Customer Loyalty in the MFP Office Copier Market by Brand Keys for thirteen consecutive years, and the World Technology Awards recently named the company a finalist in the IT Software category. Konica Minolta, Inc. has been named to the Dow Jones Sustainability World Index for nine consecutive years and has spent three years on the Global 100 Most Sustainable Corporations in the World list. Konica Minolta partners with its clients to give shape to ideas and work to bring value to our society. For more information, please visit us online and follow Konica Minolta on Facebook, YouTube, LinkedIn and Twitter. Wayne Taylor Racing’s existing lineup of partners that also features Harrison Contracting, Acura Motorsports and CIT.